Another in my ongoing series of book reviews, but first things first – the author of this one, Niall Doherty is an inspiration. Niall is a hard working, normal Irish lad. But Niall is something more, nothing less. He’s fun to be around, he speaks his mind, he enjoys life and he lives the life that he wants. He’s an inspiration to me, and to many others. Niall has lived all over the world including stints in Hong Kong, Belo Horizonte, the US, India and Spain. However back in 2011 Niall was back in Ireland making a new plan – a journey around the world without flying!! Niall started up a website, Disrupting the Rabblement, packed as lightly as he could and headed off into the sunset, or the raincloud. Niall was off on a journey. 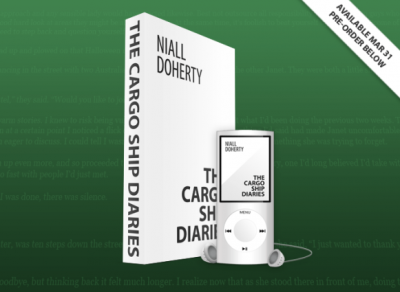 I followed his journey online and loved the stories! Almost getting stranded in India, flirting with 100 girls in Amsterdam, booking boats he could never take, having to scrape the barrel to survive in Iran to early morning jogs in the hot summer in Hong Kong. Niall was living his dream, I started following his YouTube Channel. Then as I headed for North Korea, Niall and I found out we were both in Hong Kong at the same time and we met up! He shared his stories in person, some of them awesome. 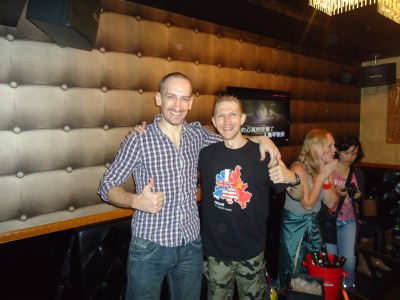 Then Niall headed back across the border into China and continued his journey. By early 2014 he was in Korea then Japan booking a cargo ship across the Pacific Ocean to South America. It was on that Cargo Ship that Niall Doherty wrote the Cargo Ship Diaries, this awesome book. I’d recommend it as a book to take to the 2014 World Cup, as Niall’s amazing journey now sees him renting out a flat in Belo Horizonte in Brazil in time for the football!

What I love about the Cargo Ship Diaries is that it mixes Niall’s personal thoughts, Niall’s actual cargo ship journey with the crazy stories along the way. All in equal measures to keep you reading and awaiting the next chapter eagerly!

Niall starts each chapter with a story from the Cargo Ship itself, including the naming of his shipmate “Dreamboat”, details of what he did on board, musings from life at sea, intertwined with personal opinions, observations and thoughts. Through reading it, you feel you are there with Niall on his journey. On the audio book you will also hear Niall’s Irish accent and his attempts to do a French accent, he declines doing a Japanese accent so as not to sound racist. Indeed we learn that the Japanese guy that was e-mailing Niall about the Cargo Ship’s departure times and confirmation is known as CAPSLOCK. That’s his real name, he is so named as HE TYPES EVERYTHING IN CAPITALS.

It’s not just a story of life at sea. Niall interrupts each chapter with a “blast from the past”, or as I would say a “crazy travel story” and he’s had a few. I won’t spoil the book for you, but read about how he flirts with 100 women in Amsterdam, how Niall and a Romanian girl pour their hearts out to each other. How he wishes he listened to that Canadian dude in Istanbul ahead of his Iran trip and more worryingly, the potential kiss he has with “a man” in Nepal. Plus there’s the earning money online on the move aspect, the finding bases on the move to get a feel for each place. The work outs, the intensity, the dry Irish humour, the packing list. Niall documents not just the Cargo Ship Diaries, but his adventures in life here. It seems like a part chapter of an autobiography and you get to know Niall Doherty quite well here.

There’s also some cool anecdotes that link back to Niall’s childhood and his early travel days. I was addicted reading the whole way through and found myself there in person, the way Niall writes his story.

On the Cargo Ship, Niall made a totally awesome video, “Dancing Across The Pacific Ocean” which I’ll share here:

The Cargo Ship Diaries is available as an e-Book and an audio book and I listened and read it to get the best of both worlds. In fact this was the first time I had ever listened to an audio book!

Other e-Books I recommend:
– How to Make Money From Your Travel Blog by Nomadic Matt
– Hot to Live A Lifestyle of Travel by Wandering Earl
– The Liar’s Guide to South America by Mike Delwiche