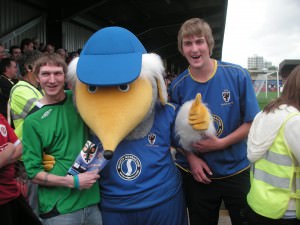 Through the years of supporting Glentoran FC, Northern Ireland, Glasgow Rangers FC and AFC Bournemouth, my football brain has also taken in many other matches unlinked to my favourite clubs. In fact, aged 15 I used to watch, play and sleep football. Through this i built up a huge football knowledge which I sometimes turn to when bored in work and needing to get work mates thinking. I make up my own football quizzes. I’ll start with a sample…

1. Which stadium in England is the highest above sea level?
2. Who is the oldest football club in the world?
3. Name two teams who have lost the FA Cup Final 4-0 since 1980
4. Who were tha last all English 11 to win an FA Cup Final?
5. Name 10 teams currently in divisions 2, 3 and 4 who have been in European Competition since 1990
6. Which French player scored the last hat-trick at Wembley before the Premier League began?
7. Who made their last England cap in the 5-1 win over Germany in 2001?
8. At what stadium did Tottenham play their 1995 Intertoto Cup matches?
9. Who was the last AFC Bournemouth player to score in the World Cup Finals (while at AFC Bournemouth)?
10. Who is the only player to have played a competitive match at League or Cup level in England, Scotland, Wales, Republic of Ireland and Northern Ireland?