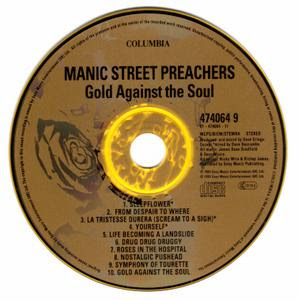 The dreary depths of 1993 saw the Manic Street Preachers surprisingly NOT split up, as they had planned after their first album, Generation Terrorists. Instead they went even more sublime, upped the stadium rock moments and delved into issues such as sleep deprivation, suicide, childbirth and the horrors of life really. This dark album rocks along. 10 tracks of ultimate true early 90s angst, such with such vibrancy and zest and now condemned to an archive of emotion in what has so far been a 20 year career for the Welsh band. Let’s have a wee review then…

1. SLEEPFLOWER – as soon as I heard this tune, I was ready for an incredible album. The catchy guitar riff rocks us into an album full of vitality in despair. This song stands alone as one of my favourites. It contains the classic line “even a beaten dog knows how to lie.” I have never seen the band play this song live, but that’s fair enough. I’ll just put on a dark coat and lie in my bedroom at night to the beats of it.
2. FROM DESPAIR TO WHERE – Arguably the best MSP song ever. The darkened reality of life is magnified here. The signs of a man in depression (Richey), the realism that nothing around is good, and there is no need to be alive “pretend there’s something worth waiting for.” The guitar solos throughout also give this song a raw, rare early 90s rock song depression. Remember this is the era when Nirvana were prominent.
3. LA TRISTESSE DURERA – Taken from a Van Gogh suicide note apparently, the song means “the sadness will never end” or “the misery will never go away”, this catchy song rushed the band into the charts at number 22 back in 1993. Its not one of my personal favourites, but I can sympathise with the depression and relate to the words.
4. YOURSELF – a wee gem of a track, often lost in the more popular songs on the album. It seems to be about self opinions, checking the mirror, facing up to yourself, and even belittling yourself. Not a song to inspire confidence, but a song to comprehend. 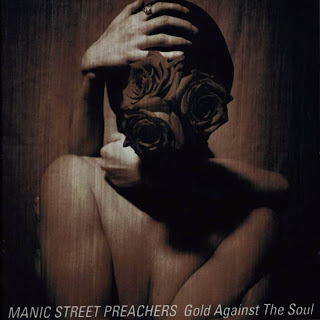 5. LIFE BECOMING A LANDSLIDE – Stand out track on the album in my opinion. Delving into childbirth, the hard reality of birth, childhood, growing up and the realisation is that there is so much sadness around us. I should have taken a leaf or two out of their books as well, “my idea of love comes from a childhood glimpse of pornography”, I should have known, maybe I’d not lose girlfriends or lovers over sex and love ever again. That line is one of the best ever in a top 40 hit. I often dream of better days listening to this song, its uplifting in the depression and really cuts deep into health issues I feel. I’ve been dumped and laughed at before for health issues, so there is something deeply soothing about a line like “a mile empty inside” or “desire on its knees.”
6. DRUG DRUG DRUGGY – One of the Manics songs that you cannot really understand totally, presumably written by Richey about a druggy. Really rocky chorus and actually a great tune, even if I listen to it with less sentimentality and belief as the others on here.
7. ROSES IN THE HOSPITAL – I love this tune, a very simple beat, a chorus to sing along to, the odd sware word and the facing up to the pain of hospitalisation and physical issues. It also gave us the line “forever delayed” long before the album and song title of the same name cropped up, some 9 or 10 years later. There’s something awe inspiring about yelling “like a leaf in the autumn, we don’t want your fucking love!” I own this on CD single as well, this features a radio friendly edit. Its hardly a pop song for kids…
8. NOSTALGIC PUSHEAD – Aged 17 I think I even had to look up the meaning of those words before listening to or deciphering the song. To me this song doesn’t fit on the album, its much more lyrically bizarre and possibly would have squeezed onto a later album much easier. Its not a reflective song, so I cannot see the sentimentality or nostalgic within, except for the line “radio nostalgia is radio death.” Lyricist Richey Edwards was out there when writing this, just check out these lyrics:
“slavery to the beat slavery to the chord”
“stonehenge is worshipped and drugs a diety”
“i wanna cover diamonds on my wife”
“my cheeks blood red as my favourite port”
All in all a fantastic song, with random references. Come to think of it, this would slip onto the current album, “Journal For Plague Lovers” and sound a part of it. 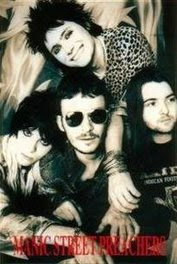 9. SYMPHONY OF TOURETTE – The subject matter of Manics songs is so wide, varied, eclectic and unbelieveable you need to constantly look things up and research. I wasn’t aware of what Tourettes was, and here is the answer:
Tourette syndrome (also called Tourette’s syndrome, Tourette’s disorder, Gilles de la Tourette syndrome, GTS or, more commonly, simply Tourette’s or TS) is an inherited neuropsychiatric disorder with onset in childhood, characterized by the presence of multiple physical (motor) tics and at least one vocal (phonic) tic; these tics characteristically wax and wane. Tourette’s is defined as part of a spectrum of tic disorders, which includes transient and chronic tics.
Tourette’s was once considered a rare and bizarre syndrome, most often associated with the exclamation of obscene words or socially inappropriate and derogatory remarks (coprolalia). However, this symptom is present in only a small minority of people with Tourette’s. Tourette’s is no longer considered a rare condition, but it may not always be correctly identified because most cases are classified as mild. Between 1 and 10 children per 1,000 have Tourette’s; as many as 10 per 1,000 people may have tic disorders, with the more common tics of eye blinking, coughing, throat clearing, sniffing, and facial movements. People with Tourette’s have normal life expectancy and intelligence. The severity of the tics decreases for most children as they pass through adolescence, and extreme Tourette’s in adulthood is a rarity. Notable individuals with Tourette’s are found in all walks of life.
Genetic and environmental factors each play a role in the etiology of Tourette’s, but the exact causes are unknown. In most cases, medication is unnecessary. There is no effective medication for every case of tics, but there are medications and therapies that can help when their use is warranted. Explanation and reassurance alone are often sufficient treatment;[6] education is an important part of any treatment plan.

The song itself is more angry than supportive, and I really struggle to understand the intelligence of Richey James Edwards. This album doesn’t have a bad song on it, though I’m not most keen on “La Tristesse Durera”

10. GOLD AGAINST THE SOUL – By this time we have had loud guitars, deep bass, everlasting drums and vocals of anger, rage, pity and trauma. The album fades out on the line “gold destroyed the soul”, whilst somehow managing to be one of the least well known title tracks I’ve ever heard. I shall have to give it a wee listen again sometime soon.

All you need to know about it – BUY IT!

ROSES IN THE HOSPITAL video:

FROM DESPAIR TO WHERE live: