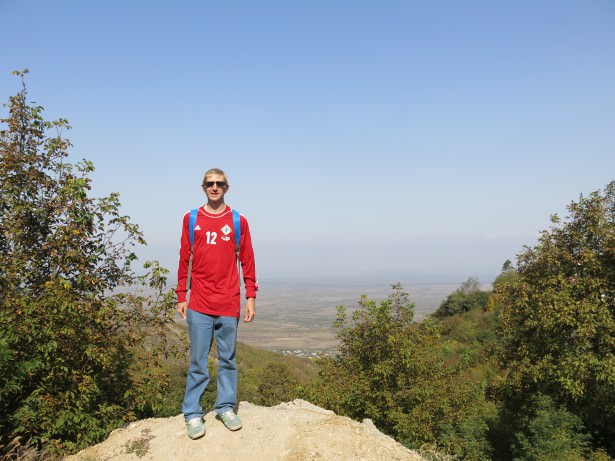 Backpacking in Sighnaghi – Georgia’s “City of Love” and enjoying the views.

Our first stop off in Georgia on our return to the country was in the city of love, Sighnaghi. We had only been absent from Georgia for 10 days backpacking in Azerbaijan. After crossing the border from Zaqatala to Lagodekhi we headed west. Not many people have written about backpacking in Sighnaghi so here’s my take on this Georgian Gem. 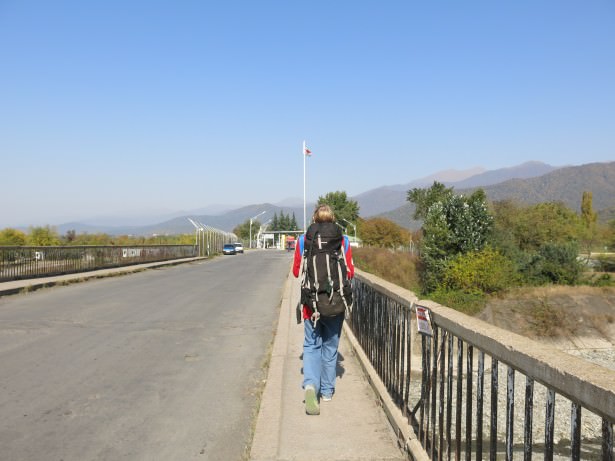 Walking across the Azerbaijan to Georgia border en route to Sighnaghi.

Don’t be fooled by thinking Sighnaghi is “off the beaten track”; it’s not. There are tourists everywhere!! But these tourists are mostly Georgian, Azerbaijani and Russian. Well that would make sense, geographically. Population wise, the town of Sighnaghi boasts a mere 2,000 residents. Expect that to double on days in the busy summer months. 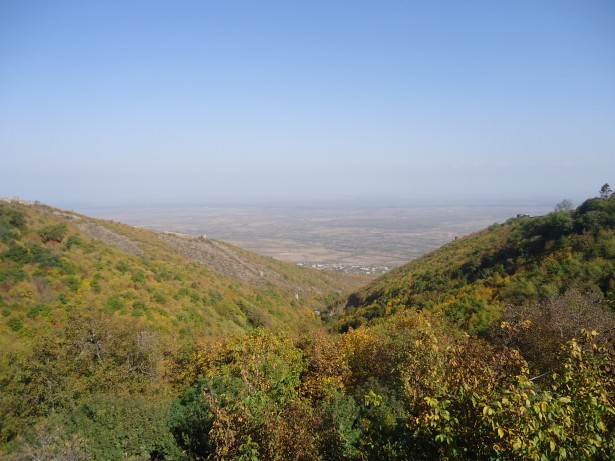 Excellent views from the city of love – Sighnaghi, Georgia.

On arrival in Sighnaghi, avoid the posh hotels around the square and head to David Zandarashvili’s hostel. Cheap, cosy, cheerful and includes free tea and coffee and breakfast. 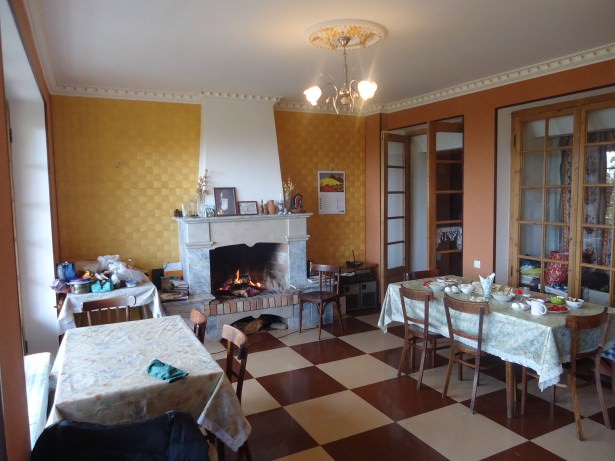 The cosy dining room in the hostel

Also as a bonus it has decent wifi downstairs and I was able to get my online work done. We bagged a decent double room at the front on the top floor. 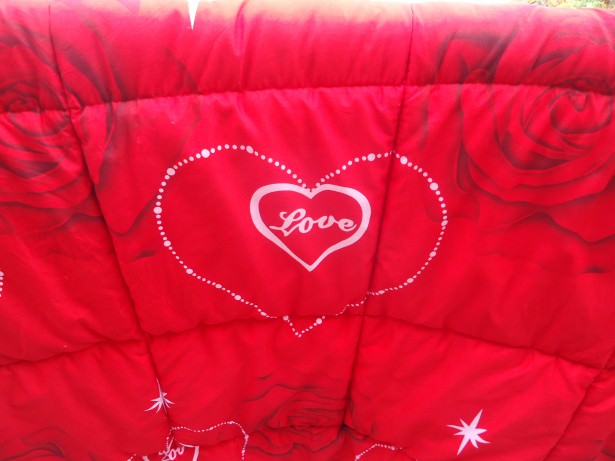 Sighnaghi is Georgia’s “City of Love” – the bed clothes even reflect this!

It was a newly decorated room and so cosy, the bed covers also had the “love feel” about them, as this is often dubbed “city of love”, city being the more harsh of those two nouns, given it’s double grand tiny population. 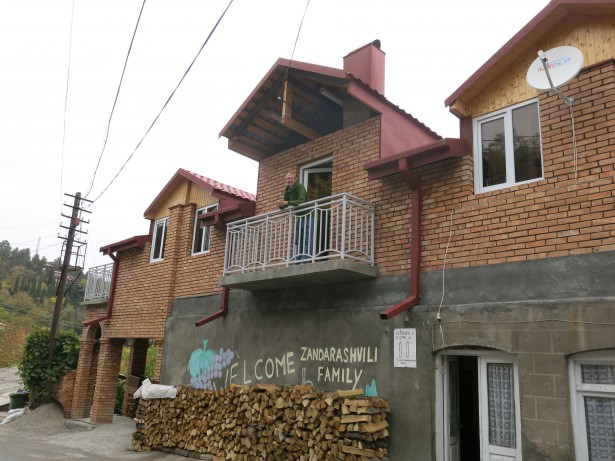 On the balcony in our room at David Zandarashvili’s Hostel in the city of love.

The selling point for Sighnaghi is its views. This is like a lofty medieval town which looks down on sparse, remote and flat countryside. Here are a few of the things we checked out while backpacking in Sighnaghi.

A panoramic view of Sighnaghi in Georgia.

The Views
As mentioned Sighnaghi is an elevated beast of a town. Views are simply tremendous, including the balcony views from the hostel. We were lucky and got a balcony room, there is also a balcony view out the back. 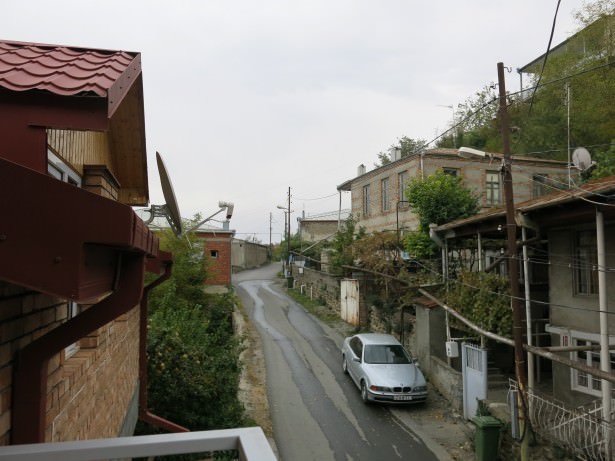 View over the street from our hotel room balcony.

We could see the street from our room and from the back of the hostel – the city walls and the views which stretch far into the countryside on a clear day. I’d imagine you can even see Azerbaijan and Russia at times. 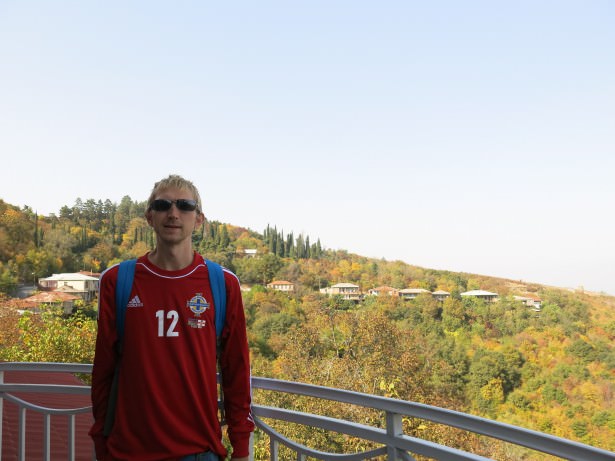 View over the countryside from our hotel balcony.

You can wander at leisure round the old city walls, which date back to the 18th century and are well restored, not crumbling and of course free to walk around. 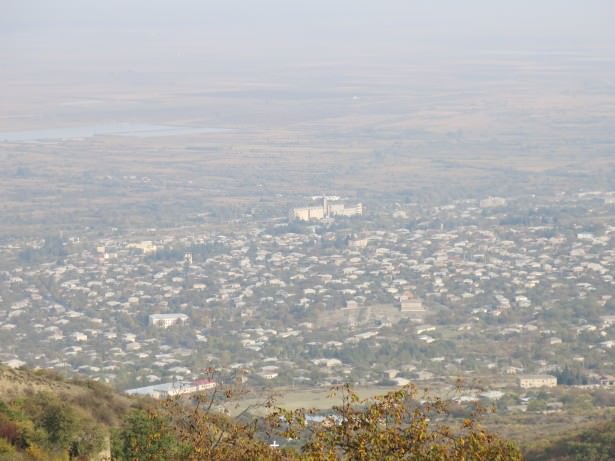 Views down to the lower town of Tsnori (I believe).

From the walls you also get some incredible views down over the region, which includes the town of Tsnori, Alazani Valley and the Caucasus mountains, and down to the Azerbaijan border. 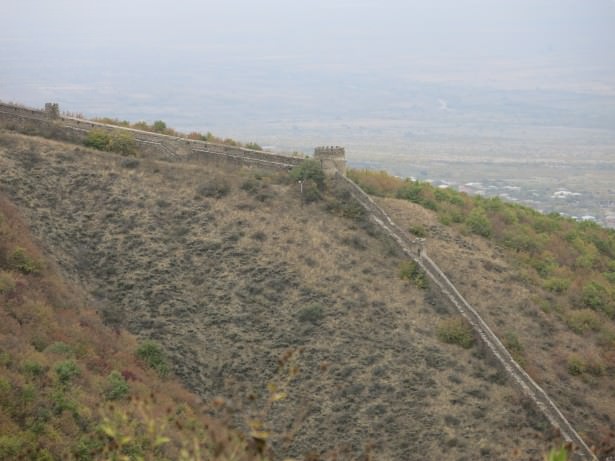 The walls of Sighnaghi, Georgia

The walls were built as a means of defence, and they span around 4kilometres in circumference. 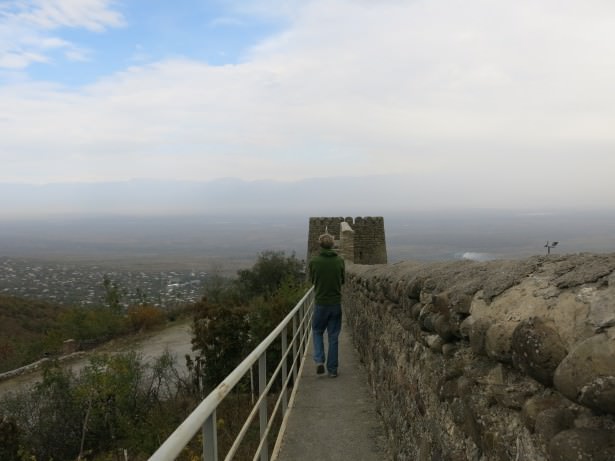 Apparently there are 23 towers and 6 gate entrances. We didn’t scale the entire wall or visit all the entrances, but we did a fair amount of it. 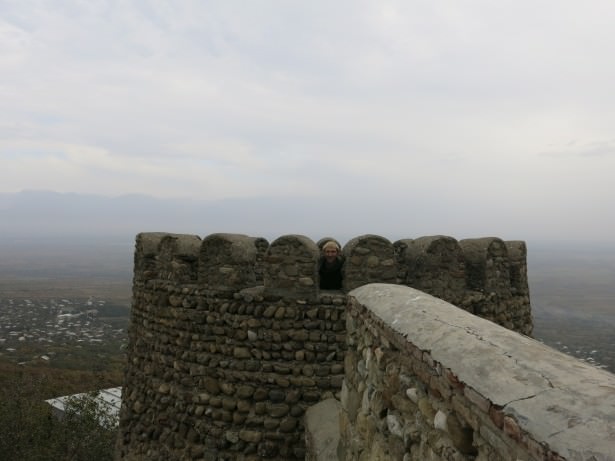 Hiding in one of 23 towers on Sighnaghi’s walls.

Food in the Square

Georgia does amazingly well on food. It’s the cheese and bread influence that I love and I fell for the awesome Khachapuri when backpacking through the country. While my favourite Khachapuri was the Adjarian Khachapuri in Batumi , Sighnaghi also delighted me food wise. A cold beer and khachapuri in the square was a great lunch. 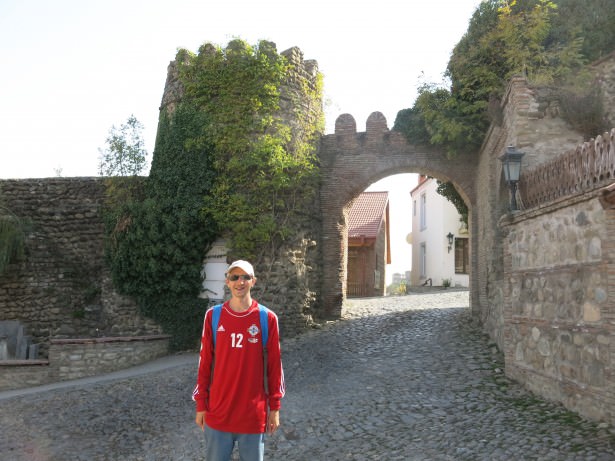 One of 6 gate entrances into the lofty town of Sighnaghi, Georgia. 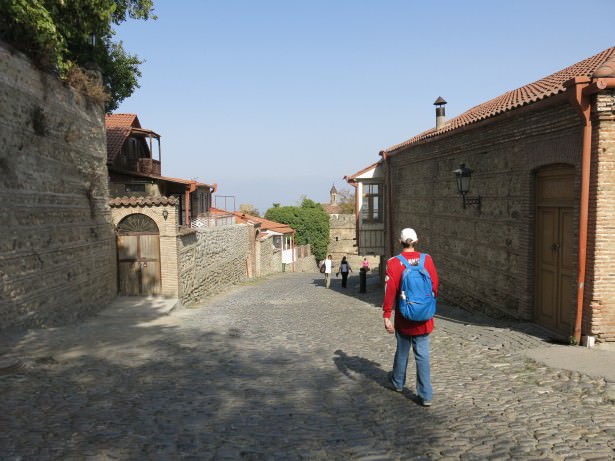 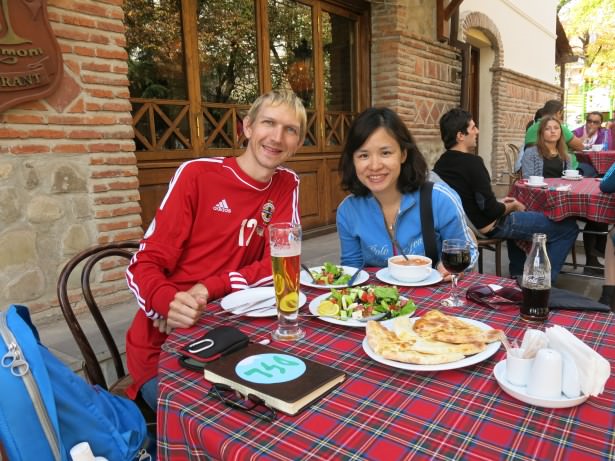 I’m not sure if we were just lucky to catch some festivals on when we were there but there were three big events on:

1. Break Dancing Competition in the Street! 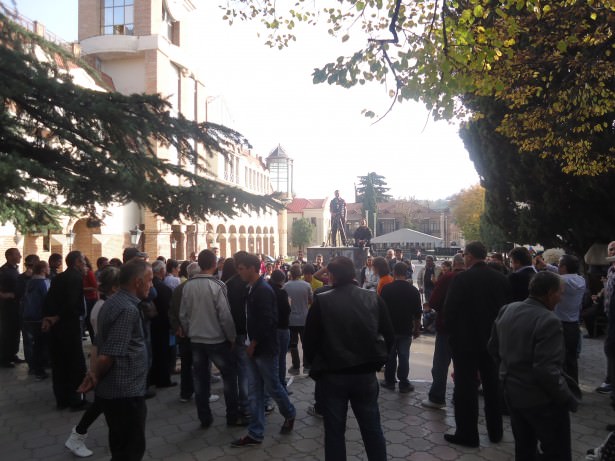 Random Festivals on in Sighnaghi the time we were there. 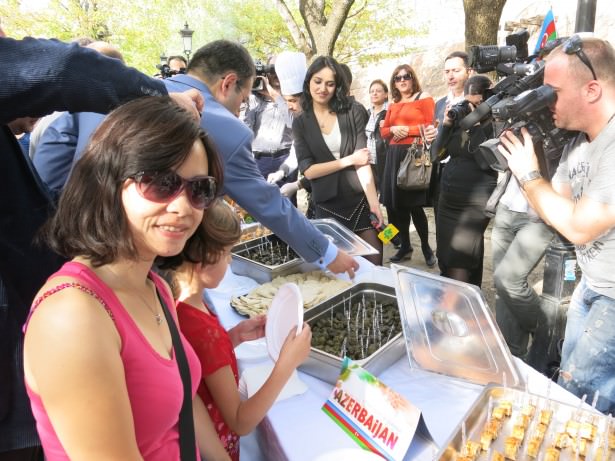 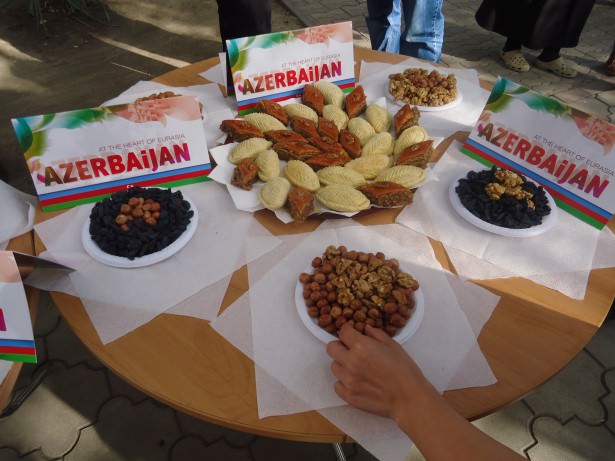 3. Live Music in the Square

Georgian towns and cities have lots of churches in them, naturally. Signaghi does well on churches, and we visited two of them.

This church is up at the top of a hill in the old poky streets: 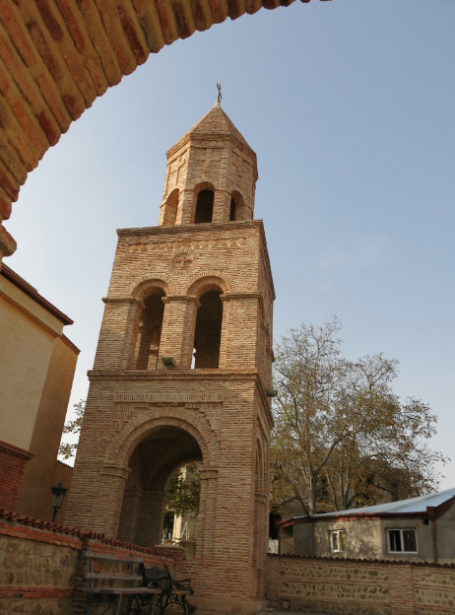 The Stepantsminda Church in Sighnaghi, Georgia.

This church is on a hill in the lower part of Sighnaghi. It dates back to the 19th Century and is well worth a visit. 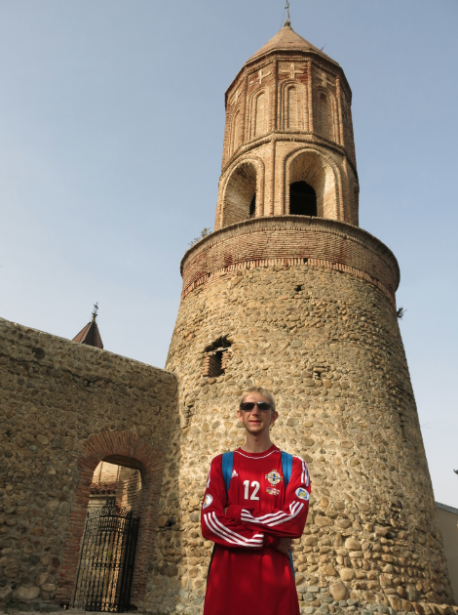 The tower at the Tsminda Giorgi Church in Sighnaghi. 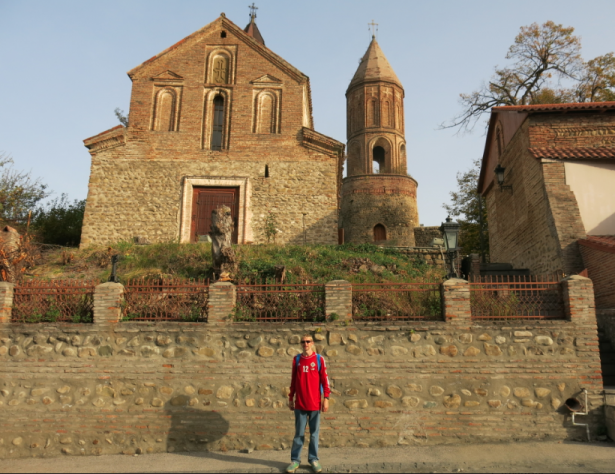 At the front of the Tsminda Giorgi Church in Sighnaghi.

Walking around Sighnaghi at your leisure you will get a few other random sights to take in. These include a museum, a pretty square and fountain, a clock tower, some unusual statues and monuments and just the everyday life on the streets here. I’ve stuck a few of the random quirky photos below. 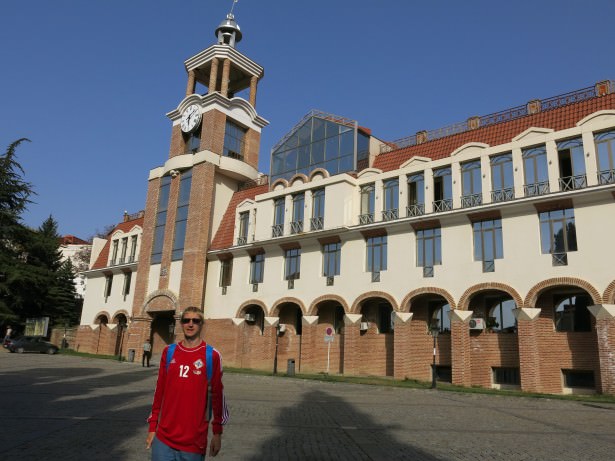 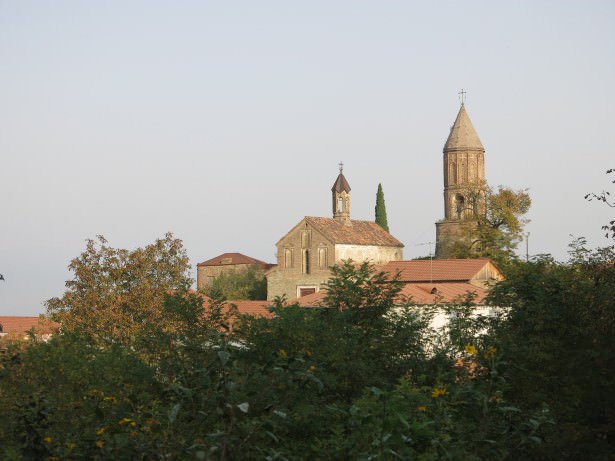 View of the Tsminda Giorgi Church from near our hostel. 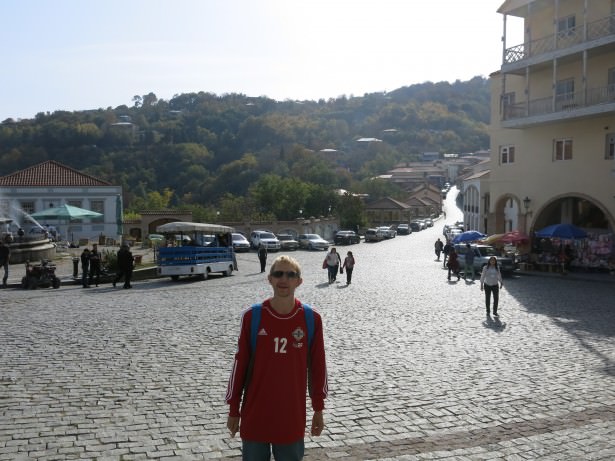 On the streets of Sighnaghi. 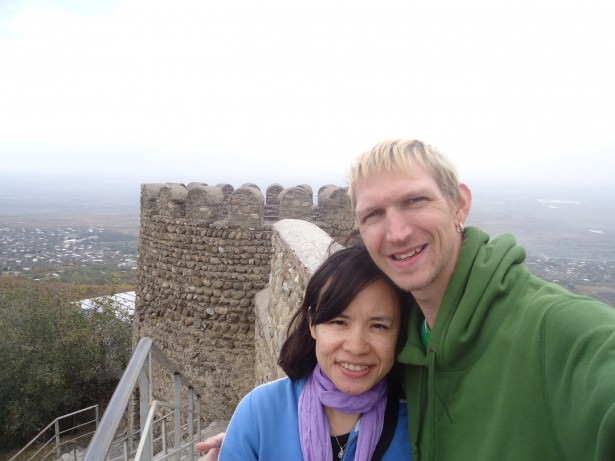 Panny and I on the walls at Sighnaghi. 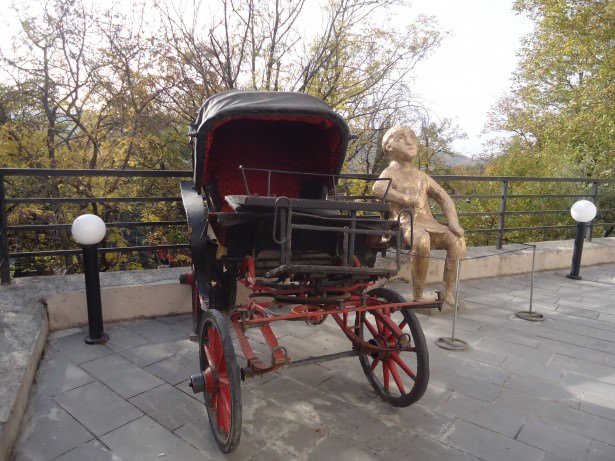 Once you’ve had your fix of Sighnaghi, sign out and head to either Tbilisi (the capital) or Telavi in the wine region. Or hop over to dreamy Azerbaijan, as long as you had no trouble getting an Azerbaijan Visa.

Here are some of my videos from backpacking in Sighnaghi, Georgia:

7 thoughts on “The City of Love: Backpacking in Sighnaghi, Georgia”