Having spent 10 epic days in Azerbaijan, it was time to head back to Georgia. We were heading early morning, north west from the city of Seki (Sheki) and aiming to be in Sighnaghi in Georgia by the afternoon. Here’s an overview of our journey which saw us use the Balaken to Lagodekhi crossing – a guide on how to get from Azerbaijan to Georgia overland, using buses and taxis. Part by part to make things easier for you, and this shows my journey, yours may of course be completely different! 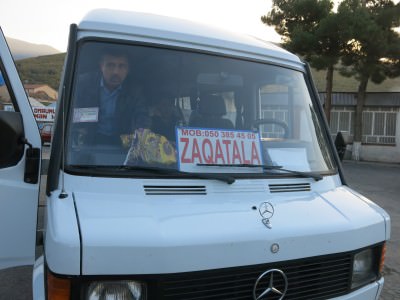 The day began in Seki at 8am. We left our hostel (Karavansaray – recommended) and took a local taxi for 1 Manat to Seki bus station. That much is easy – hail one down in the street and bargain with them. Most locals pay 1 Manat for a local taxi. They’re normally Ladas. 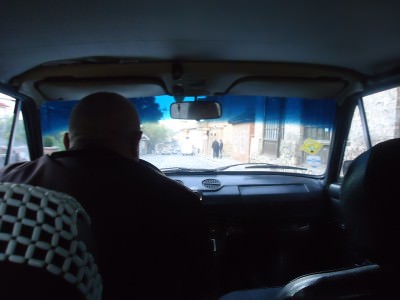 Booking the Seki to Zaqatala Bus

We opted for the 9am Seki to Zaqatala mini-bus/marshrutky, which costs 1.7 Manats per person. Just tell the ticket booth attendant Zaqatala and they’ll understand. In Seki, nobody speaks English nor have they heard of it. 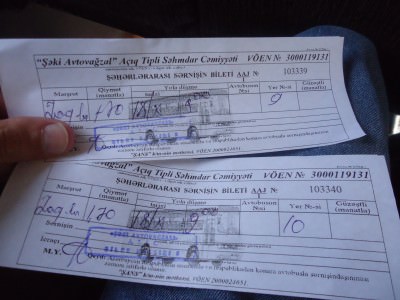 You can also go straight to Balaken, which is closer to the border but oddly this costs more, so you’re better to split your journey into two separate buses and journeys. Buy the tickets from the ticket booth on arrival at Seki bus station. Payment in Azerbaijani Manat only. 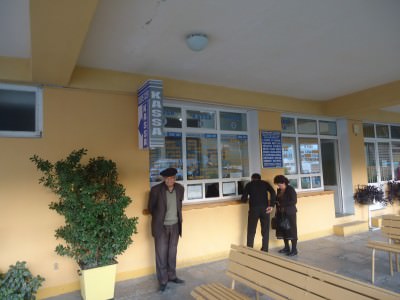 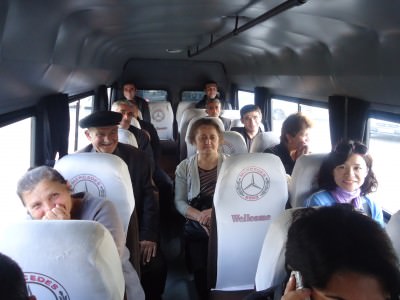 The local bus from Seki to Zaqatala in Azerbaijan! 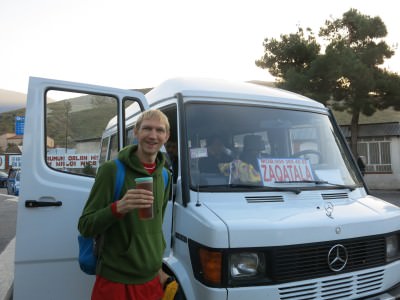 The bus left on time, was full and we were off! I had grabbed a cup of tea for the journey (filled my flask up). We arrived in Zaqatala about 1 and a half hours later. 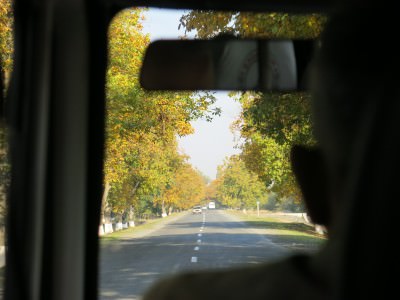 The road from Seki to Zaqatala, Azerbaijan.

If you want to explore Zaqatala, you have time of course. We wanted to head straight to the border and back to Georgia. As well as this, we had our big backpacks on. In terms of sightseeing, there’s a Russian Fortress, an Old Town Square and this is the hazelnut capital of Azerbaijan so try the local nuts! 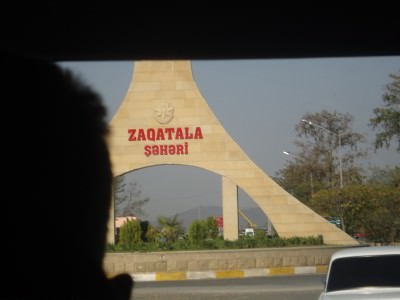 We didn’t linger long in Zaqatala – about 40 minutes at the most and most of that was waiting for the mini-bus to fill up. It leaves when it’s full – you’ll get used to this when you’re backpacking in Azerbaijan. 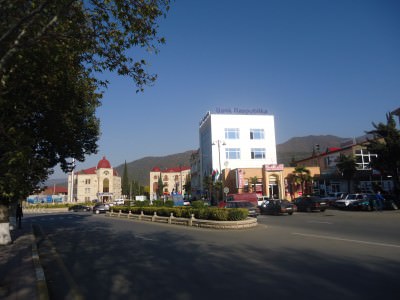 On arrival at Zaqatala a load of taxi drivers will approach you. Avoid them and walk on – to the main bus station. If you get stuck ask for Avto Vagzal, once there you board another mini-bus/marshrutky for Balaken. There is unlikely to be any other backpackers about. Again the bus should be around 1-2 Manats (subject to change of course). 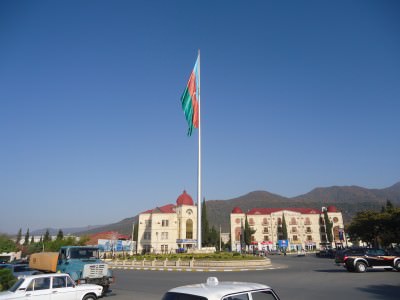 The journey from Zaqatala to Balaken is fairly quick. I cannot remember exactly to be honest, but less than 45 minutes for sure. The roads are decent enough. 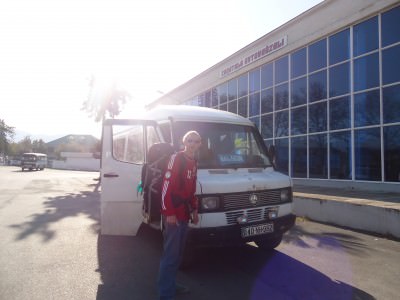 Balaken is still a few miles from the border and you will be dropped off in the city centre. Share a taxi and bargain it down. We paid 2.80 Manats for our taxi. The ride is short – I’m thinking about 10 minutes. Again, sightseeing in Balaken is also an option for you but we missed it and moved on, to head back to Georgia! We were in Balaken city centre for all of three minutes. 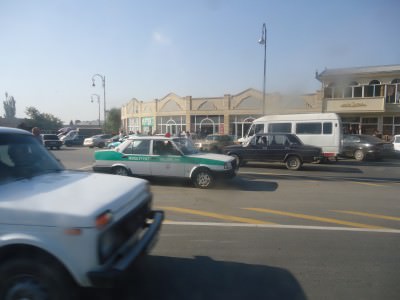 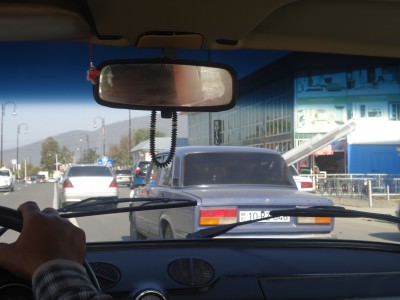 The departure from Azerbaijan north west of Balaken is smooth. You see the massive exit gate/arch and head along the security path on the right hand side. Passport stamped on exit and your bag will be checked. That’s it. You’ve now left Azerbaijan. The entire process took about 10 minutes – no paperwork required. 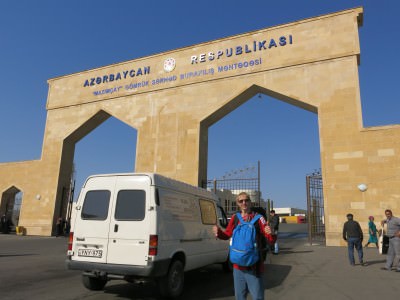 World Borders: On the path from Azerbaijan to Georgia north of Balaken.

The Bridge Between Azerbaijan and Georgia

This is the cool touristy part!! Sneak a few photos on the border bridge which overlooks some spectacular scenery. Behind you, Azerbaijan. In front of you, Georgia. 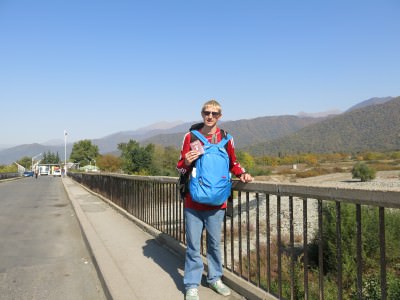 Crossing the actual border from Azerbaijan to Georgia – on the bridge. 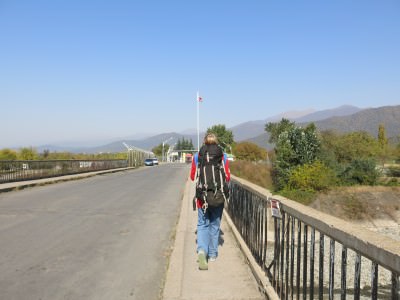 World Borders: Walking across the border back into Georgia. 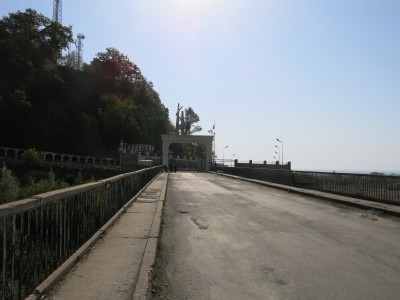 The bridge itself – looking back at Azerbaijan. 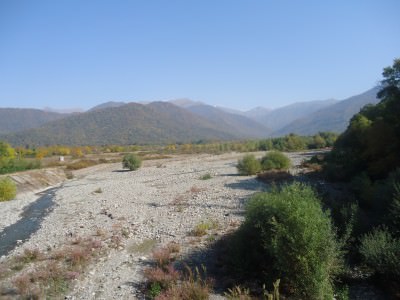 The picturesque mountain area at the Azerbaijan to Georgia border.

Arrival into Georgia Near Lagodekhi

Your passport will be stamped as saying Lagodekhi on it, but that’s a few kilometres away. You’ll just be stamped in if you have an EU passport, or even a Hong Kong one. No visas needed for lots of nationalities. Check in advance. The arrival procedure takes about 5 minutes maximum. By 12.30 pm we were on our way to Sighnaghi. A very smooth and fast border crossing despite the language barriers. 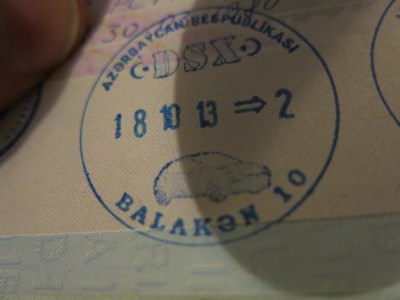 Departure stamp from Azerbaijan at Balaken. 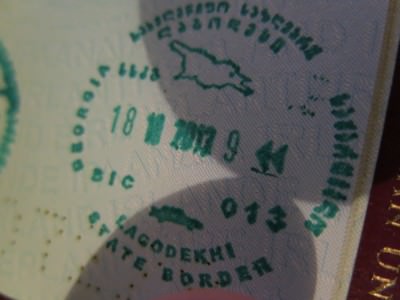 Arrival stamp at Lagodekhi in Georgia.

You have a few options from here, either stay in the city or move on. Most people seem to head to Telavi or Tbilisi but we decided to head to Sighnaghi. It was only marginally cheaper to get a Marshrutky than a shared taxi so we took the shared taxi option for once and it worked out well. I’ll be writing more about Georgia over the next few months, here’s a photo from Sighnaghi (also termed “city of love”) 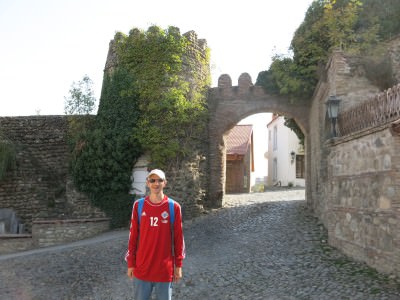 My Videos from Crossing the Border from Azerbaijan into Georgia:

How to get from Azerbaijan to Georgia – the border bridge

20 thoughts on “World Borders: How to Get From Azerbaijan to Georgia (Balaken to Lagodekhi)”