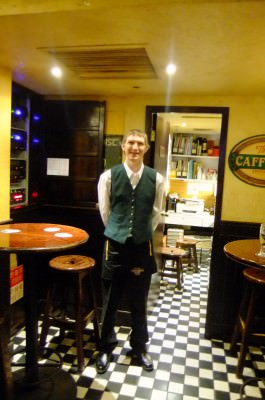 Working Wednesdays: Ready for my first shift at Delaney’s Irish Pub in Tsim Sha Tsui, Hong Kong back in 2011.

Today on Working Wednesdays, I’m finally getting round to telling the tale of how I came to Hong Kong in the first place and why I ended up staying there, working there and using it as my base to backpack all over Asia including lots of adventures into China. It’s a story which I’ll separate into three parts, such is the need to cover yet another topsy turky journey on this planet. Here’s part one. 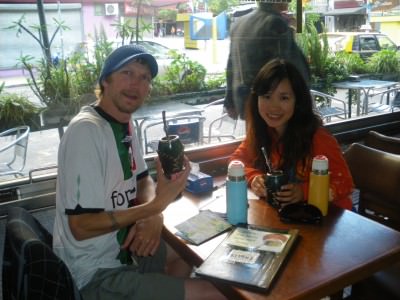 After meeting Panny Yu in Antarctica and Uruguay, I headed to Hong Kong to visit her.

So the story began when I met my girlfriend Panny Yu in Antarctica in 2010. After meeting up together in Uruguay, we kept in touch online and after I was done with my South American (and African) adventure, I headed back to Australia to work. That was early 2011. Panny came to visit me on my only weekend off work over the next few months. It was then my turn to return the favour and head to her home – Hong Kong. 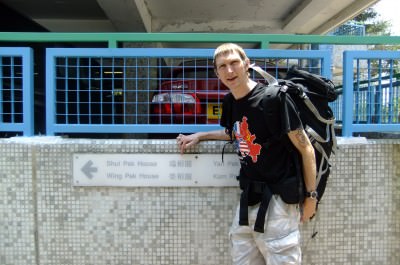 One day I arrived in Lam Tin, Hong Kong with a backpack and a valid working holiday visa.

Despite what you may have expected of me from my crazy backpacking jaunts down the years, as of May 2011, I had NEVER been to Hong Kong, not even to change flights. I’d been to China, Taiwan of course and I’d visited cities like Kuala Lumpur and Singapore a few times over. But Hong Kong eluded me, so I was excited when I booked the flights from Sydney (to Melbourne to Singapore to Hong Kong – with the bonus of a day with my cousin Chris in Singapore). 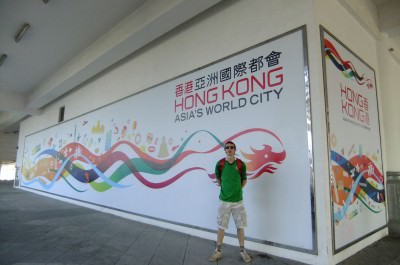 Northern Irishman in Hong Kong, Asia’s World City, this photo from my first day in HK back in May 2011.

I turned up in Hong Kong with my backpack. The plan was to go backpacking, see Panny’s home, hang out with her and then head back to Australia to work. However things changed dramatically for me over the course of a few days and I found myself with more options than life had thrown at me before. 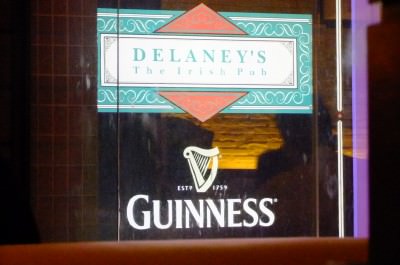 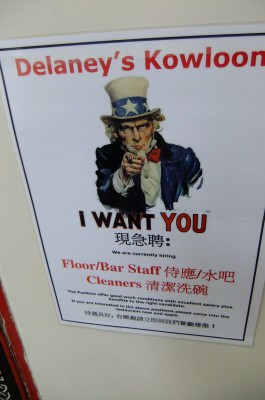 The advert I saw in Tsim Sha Tsui while walking down the street – it changed my life, though I didn’t know it then.

After just 2 days in Hong Kong, we were walking along Peking Road in Tsim Sha Tsui and I just happened to see an advert outside a pub saying they were looking for staff in the Irish Pub there, Delaney’s. It was already at the back of my mind that I could get an easy passage into the country by having a job in a bar. I had just turned 31 in fact, yet through foresight I had decided to get my Hong Kong Working Holiday Visa sorted while I was still 30 (31 being the cut off age). In I went to Delaney’s, spoke to Jack at the bar, showed them my Hong Kong Working Holiday Visa and then I met Colin the manager. Knowing I was from Northern Ireland and had worked in a load of bars before, including 3 Irish Pubs, he got me to fill in some forms. I was still on holiday and backpacking as I saw it. 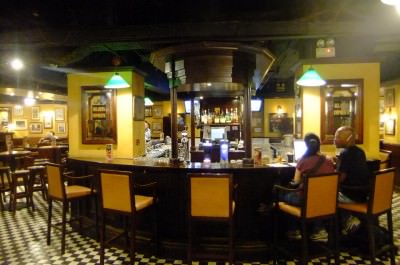 The interior of the bar at Delaneys, Tsim Sha Tsui, Hong Kong.

Panny had kindly sorted me out with a Hong Kong phone, just in case they happened to call me. Panny went to work the next day and I headed sightseeing round Hong Kong Island. I’ll never forget the moment I was walking around Causeway Bay, answered my phone and it was Ivy from Delaney’s Irish Pub. Not only offering me the job, but they wanted me to start the following night. I had only had 4 days off work in the end and on my holiday and backpacking adventure, I was suddenly working! It was all a bit crazy. However one thing I hadn’t told them. I had flights booked to Singapore that Sunday at 7am… 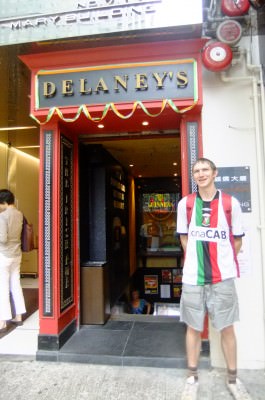 Outside Delaney’s about to start work in Hong Kong for the first time.

So I did my first Friday night shift in the pub (6pm to 3am) and then the next night I was also working 6pm to 3am, however at 3am, I’d basically have to go straight to the airport. I was a backpacker working. I earned my money on tips, had a few after work Guinnesses, and I had done 2 shifts working in Hong Kong. Colin the manager was on holiday though so whether or not I still had a job there lay in the hands of the Gods. 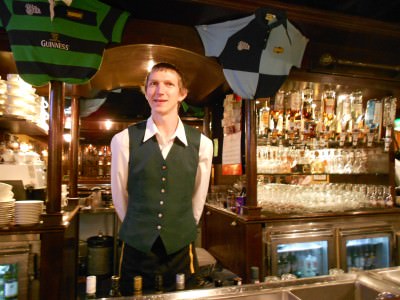 I knew Colin wouldn’t like it when I’d ask for a week or two off when I’d only just started there. I was told to phone him that Wednesday to check I still had the job. I felt I’d worked pretty hard those 2 nights and loved the job. I was confident. But he said no on the phone and I had to hatch a new plan. There will be another twist in this story, but for the meantime I bounced through Singapore and headed back to the land down under, to work in…yes PJ Gallagher’s Irish Pub in Parramatta. I basically had 2 jobs in 2 countries, in 2 continents, in 2 different Irish Pubs at the SAME TIME. There’s something else I kept quiet from Colin at the time, and I’ll come clean on it in one of the next instalments of this story, but that was the first part of my Hong Kong Irish Pub Adventure. 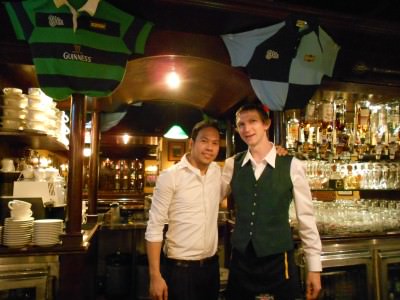 On the bar with Jack working on my first weekend at Delaney’s in Tsim Sha Tsui, Hong Kong

I worked 2 shifts, on the bar, loving it. I met Jack and Anna and liked working with them. I liked the pub, the food, the menu and the customers. I got to watch some live football and tennis as I worked. I tried the awesome Guinness Pie. I got after work drinks. I got some great photos from those two shifts as you can see. I thought it was meant to be. But after 2 shifts, that was it. My stint as a barman in Hong Kong had been and gone, because I was off to Singapore… 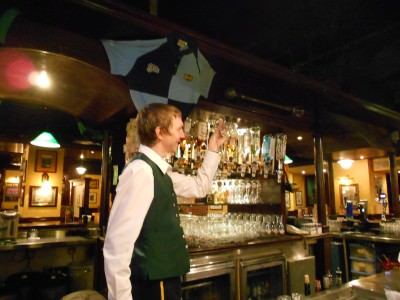 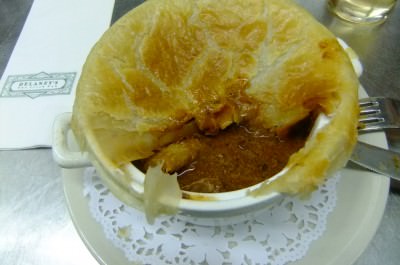 Great food in Delaney’s – when I worked there I tried them all – including the Guinness Pie! 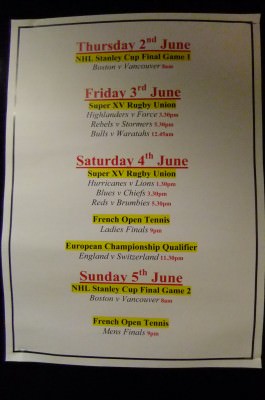 As a bonus I got to watch live football as I worked in Delaney’s Irish Pub in Hong Kong.

I mean who would trust a globetrotting backpacking Northern Irishman. You never know where I’m off to next. Because I also don’t. 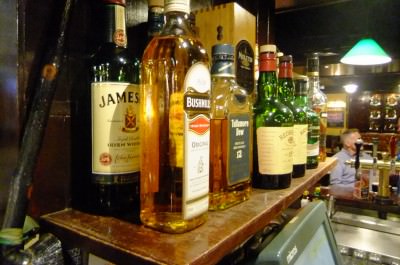 Plenty of whiskey including Bushmills from Northern Ireland.

Look out for part 2 of this story, more twists than a Poirot thriller this one…