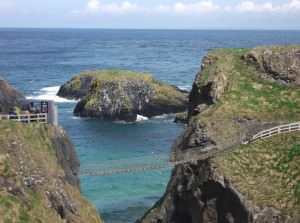 Travelling in your home country is something people often overlook and despite the fact that I don’t live in Northern Ireland anymore, I still LOVE the tourist sights that we have to offer. On every trip back I make sure I visit at least one tourist attraction. Crossing the Carrick-a-Rede rope bridge on Northern Ireland’s north coast is a well known and popular attraction for visitors to the country. Here’s a quick overview of my visit, which was on a rare trip home in April 2012. I loved walking across the bridge at Carrick-a-Rede! 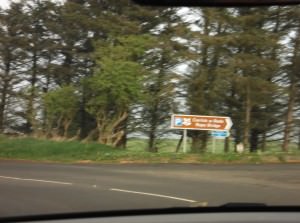 How do you get to the Carrick-a-Rede rope bridge? Well you’ll be glad to hear that it’s signposted these days, took this photo on the way in!

How do you get to the Carrick-A-Rede Rope Bridge?

It’s on the north Antrim Coast of Northern Ireland. One thing I like about Northern Ireland’s transport system is that it makes places difficult to get to, meaning you will have to go off the beaten track a bit to reach places like the Carrick-a-Rede rope bridge. It’s not on a train route nor is it in an actual town or village so the best way to reach it is by car. Either hire a car, hire a driver or go with friends who live there and have cars. 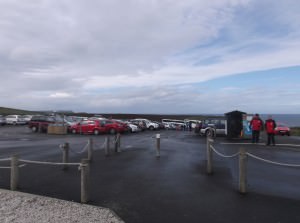 There’s a massive car park at the Carrick-A-Rede rope bridge, car is the best way to get there.

Drive along the B15 road from Ballycastle to Ballintoy. The turn off and obvious sign posts for the Carrick-a-Rede rope bridge are about 5 miles west of Ballycastle and 7 miles east of Bushmills, just past the village of Ballintoy. It is all signposted to be honest but you can still get lost. If you see tour buses on the road, I’d say follow them as they are probably heading for it as part of a north coast tour which will also include the Giant’s Causeway! 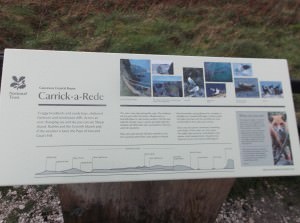 Surprisingly there are actually 3 bus routes that head to, stop at or pass the Carrick-A-Rede rope bridge! This is the proper travellers way to do it by the way, here are the Ulsterbus routes: Ulsterbus 172 from Coleraine, Ulsterbus 252 and 256 from Belfast. Please check the Ulsterbus timetables when you’re in Coleraine or Belfast though, I won’t put the current routes and times up here in case they change. 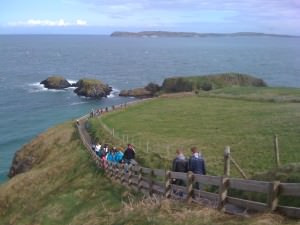 The path down to the Carrick a Rede rope bridge in Northern Ireland.

Going as part of a tour or tourist bus is also an option you might want to look into if you don’t want to go by car or take the local bus. Tours head regularly to the north Antrim Coast. 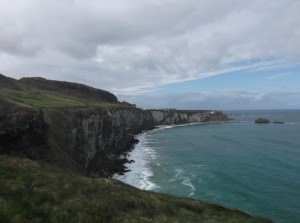 On the walk down you will LOVE the immense north Antrim coastline. The unsung beauty of Northern Ireland.

Once you get to the entrance there is a short walk down from the ticket office on a pretty coastal path to the bridge itself. Enjoy the views – they’re stunning.

What is the Carrick-A-Rede Rope Bridge?

It is a rope bridge (now made also with a lot of wood by the way for safety reasons!) that connects Carrick-A-Rede island to the Northern Irish mainland. 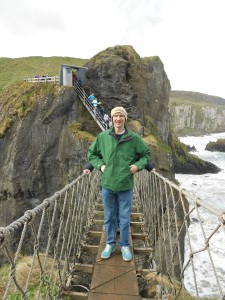 Crossing the Carrick-A-Rede Rope Bridge in Northern Ireland – only slightly more rope than wood these days!

There is an epic cliff top walk down from the car park, the views are fantastic. There is a downward ascent to the entrance to the rope bridge. The Rope Bridge is over 20 metres long, and stands at a height of around 30 metres above sea level. There is a limit of 8 people on it at any one time. 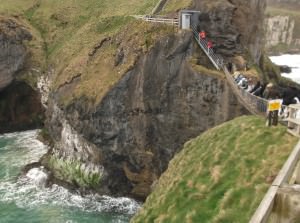 The first glimpse of Carrick A Rede rope bridge on the walk down.

While it’s not really suitable for those with a fear of heights, it’s perfectly safe. I wouldn’t advise paying entry to it and then not walking across! You have to walk across it!! 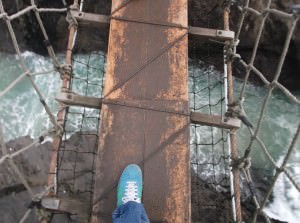 Walking on the Carrick A Reed rope bridge – probably not for those with a fear of heights but you HAVE to cross it!

By the way, it’s used primarily for tourism of course these days but it was built and used initially by salmon fishermen who were able to get much better catches from Carrick-A-Rede island. In the 1980s it had a reputation for being a shaky and dodgy dangerous bridge with a slight adrenalin factor. Since a tourist boom to Northern Ireland post 1998, it is now totally safe, not scarey and basically just a bridge connecting to the island. Don’t be scared! 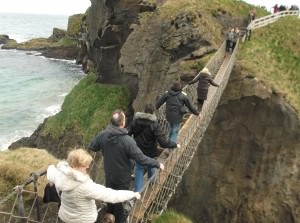 The views from the island are fantastic and getting your photo taken on the bridge are something all tourists like to do. 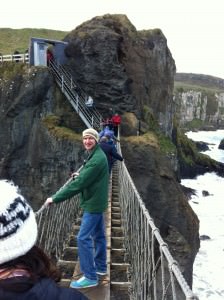 How Much Does It Cost to Walk the Carrick-A-Rede Rope Bridge?

It’s owned by the National Trust so members may get it for discount or for free, but here are the current prices (as of April 2013): 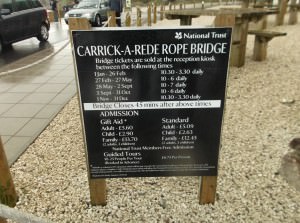 When Is The Best Time of Year To Visit the Carrick-A-Rede Rope Bridge?

It is currently open from 10 am until 6 pm most of the year. On bank and public holidays it is also regularly open, but seriously I’d avoid it on the 12th July, 25th December and any major Northern Irish or UK holiday as it will either be busy or the roads will be busy, or even blocked with parades. 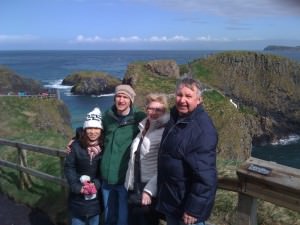 With my parents and my girlfriend enjoying the wind on the North Antrim Coast with the Carrick-A-Rede rope bridge in behind!

If you want my advice, I’d say mid September is a good time to see it in late summer and to get your winter chills experience of it, I’d head on a freezing cold day in January. Northern Ireland does suffer from extreme weather conditions at times and it snows in winter so there is also the possibly of it being closed or no access due to snow. Just keep that in mind! 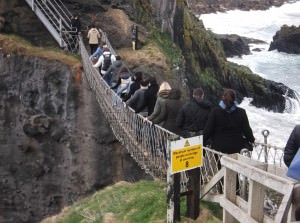 The view of the bridge and mainland Northern Ireland from Carrick-A-Reed island.

Other Tips for Crossing the Carrick-A-Rede Rope Bridge

Bring a poncho or an umbrella as it rains quite a lot. Also be aware that if its busy you have to move in single file quickly across the bridge so if you want your photo taken while crossing the Carrick-a-Rede rope bridge have your camera ready. Crossing it only takes about 30 – 40 seconds! 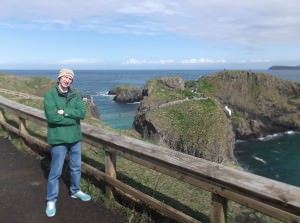 Admiring the Carrick-A-Rede Rope Bridge from afar. Really worth seeing!

What Else Is There To See Near the Carrick-A-Rede Rope Bridge?

There is a lot – this is Northern Ireland after all – one of the best off the beaten track tourist countries in the world!! Even the area nearby is littered with an abundance of top sights. For example the World Heritage Giant’s Causeway which is a mere 7 miles away and will literally blow you away. There are also the white cliffs along the coast, scores of decent beaches and a ruined castle – Dunluce Castle. 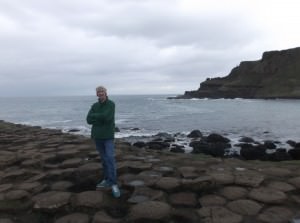 Don’t miss the Giant’s Causeway as well if you’re in the north Antrim Coast of Northern Ireland.

The town of Bushmills houses Ireland’s Oldest Whiskey Distillery which is great for a tour and the pubs in the town serve up great Irish food and Guinness. You’ll need to stay overnight in the area if you want my advice. You could do them on a day trip from Belfast – but chill out and have a night in a place on the North Antrim coast such as Portrush, Castlerock, Bushmills or Coleraine. It’s a truly beautiful part of the world.

My Videos from my visit to the Carrick-A-Rede Rope Bridge:

Walking down before crossing the Carrick-A-Reed Rope Bridge:

At the wet entrance to Carrick-A-Reed Rope Bridge: