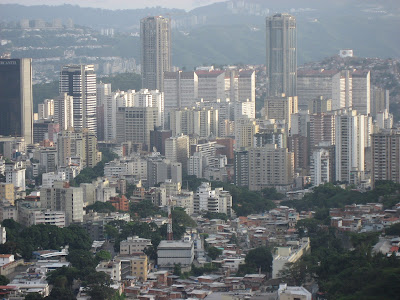 Short post here for probably the shortest ever tour I did of a capital city. Unimpressed by Venezuela and due to some problems faced there, I never got to actually see the country properly, or indeed its capital of Caracas. In the end I had to use Caracas as merely a city to get my visa for Suriname. However in the crazy struggle to get that visa, I ended up in the downtown part of Caracas. Photos and short captions only. Venezuela has probably already had more coverage than it deserves on here! 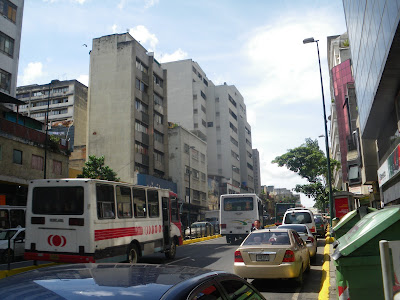 Traffic runs through downtown Caracas. First time I’ve looked at these photos since I was there. I got in one of those buses actually, here’s me inside one: 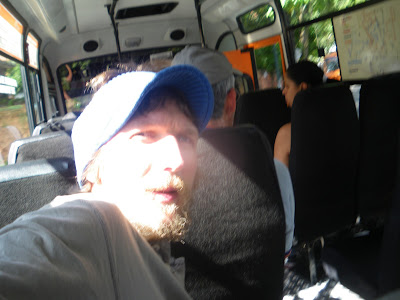 I took the photo myself though I got on the bus with Luisa, a tour guide I bumped into while sitting on a pillar in Altamira. The lady who played a big part in helping exchange my Venezuelan Bolivares for US Dollars. 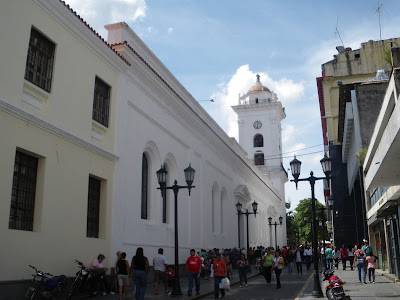 The Cathedral in Caracas. Or at least the side of it.

Dodgy wee shop including drugs, guns and money conversion. This pawn shop was dodgy as hell, on an alley somewhere and it’s where Luisa and I got my money changed over. I seen guns for watches, cocaine smugglers and escaped some dodgy characters bound to be pickpockets, druggies or ex convicts. I wanted to get photos and videos, particularly of the guy with a gun and the odd conversations taking place in this area, but alas I was a foreigner and I didn’t want to attract attention. 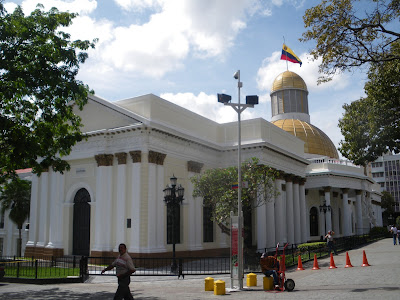 A Venezuela flag flies over the National Assembly building, near Plaza Bolivar. It definitely wasn’t touristy there. I couldn’t be arsed going into any of these buildings. Caracas was a bad enough experience, never mind pretending to enjoy sightseeing in it! 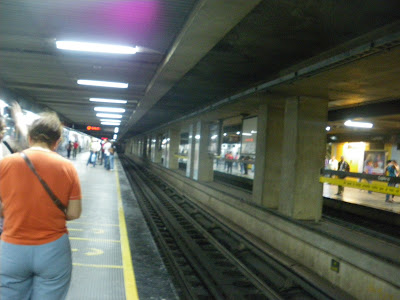 The metro system in central Caracas. Despite what you think, the metro system in Caracas was very safe. This was odd to me, given that the city outside was dangerous. I only used the metro 3 times however, and one bus. The rest of the time was taxis or walking. 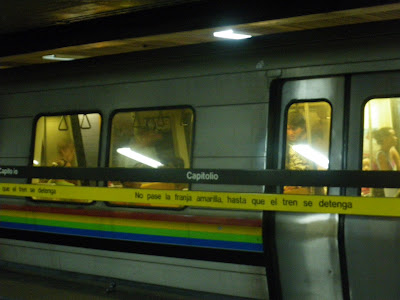 The trains have a rainbow stripe in the middle of them. I took this photo when it stopped at Capitolio. 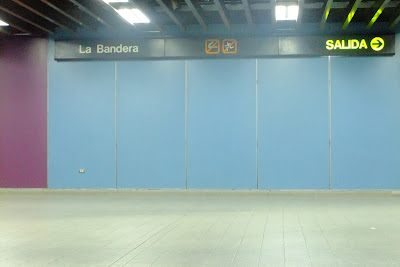 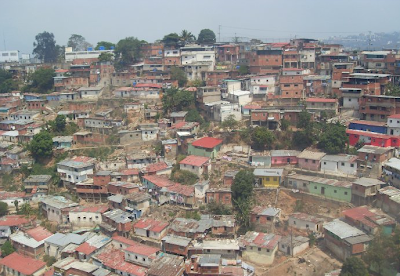 There are some decent free things to do in Caracas including getting the free cable car (NOT the Teleferico touristy one) over the city. Thanks to my girlfriend Panny Yu for a few of these photos including the excellent one above – a view down into those barrios – the not so safe parts of Caracas shall we say! 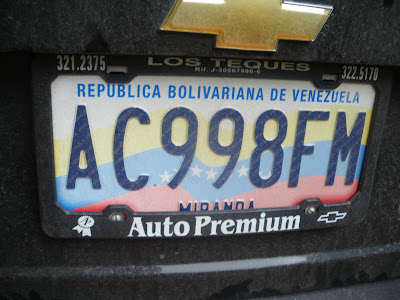 I just took this photo for the sake of it. Liked the fact it was 99.8 FM like a radio station. 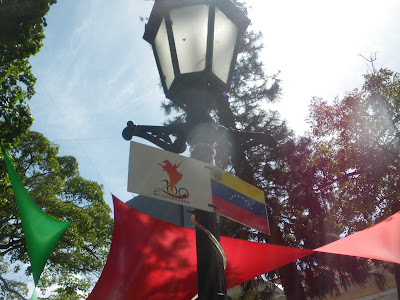 They were celebrating 200 years of something (this was January 2011) but I really didn’t care what it meant. 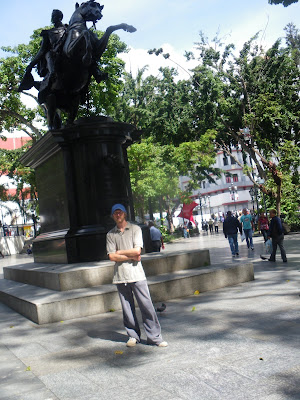 This is me at the horse statue of Simon Bolivar (I think) which is in Plaza Bolivar bang in the city centre. It’s probably the most touristy photo taken of me in the whole time I spent in Venezuela. My facial expression says it all! Something like “here I am at a famous square and monument in Caracas, Venezuela and frankly I don’t give a fuck!”. 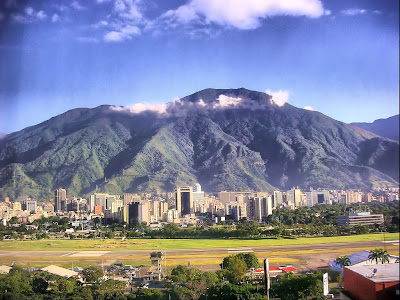 Caracas is nestled into a very flat area next to these mountains and looks rather pretty from afar as this photo shows. My only real glimpses of this were looking up from Altamira Square, from my morning taxi in darkness and from my flight out. 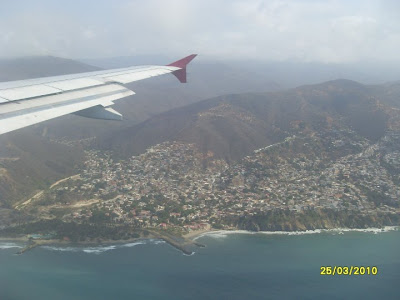 From my girlfriend Panny Yu then here are some more of her snaps. She was in Caracas about 10 months before me, she flew into it (while later on I flew out of it). Great shot of Caracas with its mountains in behind from the plane. 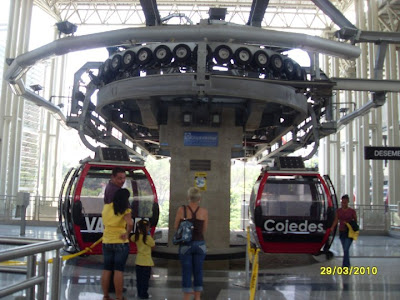 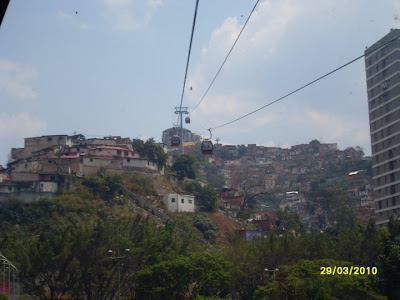 The cable car ride up through the Barrios of Caracas. While Panny was doing this, I was working on a broccoli farm in East Sassafras and hadn’t even met her yet. 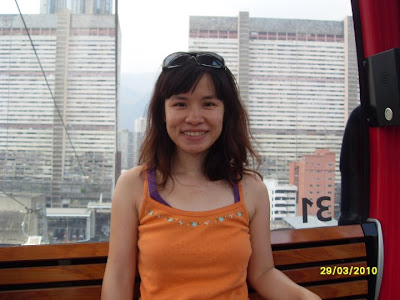 Panny Yu on the Caracas cable car going up. She was actually there a day before my 30th birthday! 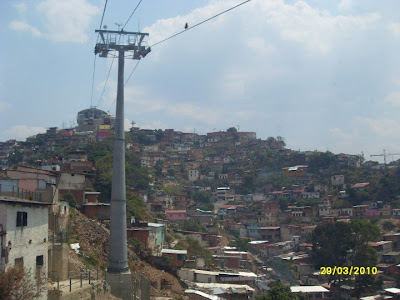 The view heading up the cable car. 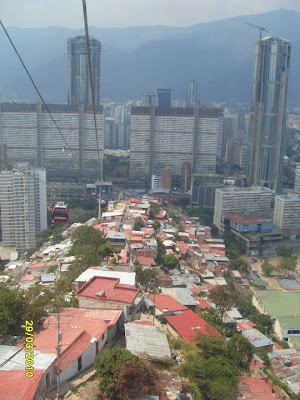 The view looking down from the Cable Car. 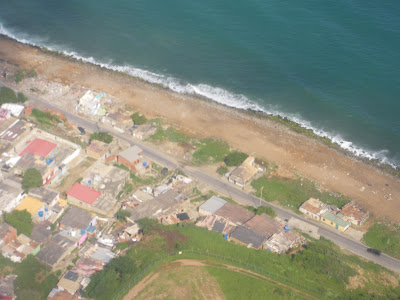 I’ll just close the post by showing my final view of Caracas from my flight out. I wasn’t particularly upset or sad to leave Venezuela. It’s not a country I enjoyed, but then travel is all about opinions and experiences and this was certainly an experience! There will be a few more reports on Venezuela however as I’ve ended up doing a lot of research into it, albeit post my visit and some of the facts and things I’ve read are horrendous. I’m actually glad I had a safe and enjoyable passage through the country and dare I say it, enjoyed the “sights” of the downtown…
CHECK THIS VIDEO OUT FOR A 1996 STORY OF TWO ENGLISH GUYS IN CARACAS:
I also didn’t take any videos in downtown Caracas, here’s what it might have been like:
CARACAS – DANGEROUS CITY:
DRIVING AROUND CARACAS:
SOME GUYS GOING TO WORK ON THE CARACAS CABLE CAR:
And here’s one of my videos from the centre of Altamira:
Join 15,017 Monthly Readers! If you enjoyed this article and LOVE travel and SAVING money, get e-mail updates from Don’t Stop Living – a lifestyle of travel! (It’s Free) 😉 Jonny