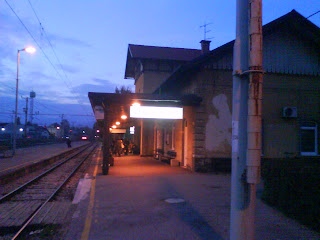 Don’t be scared by the title and don’t worry about my post-war experiences in the former Yugoslavia, it was sheer bliss and what a beautiful, breathtaking experience. I didn’t see any war, of course I wouldn’t! It was 2008, I was 28, Yugoslavia had been long gone and in a strange twist of circumstances, I found my life going full circle right before my Northern Irish blue eyes, and I couldn’t quite believe it was all happening. My first EVER Northern Ireland home football match had been back in 1990, when we lost 2-0 to Yugoslavia. That former – Yugoslavia team were probably one of the best in the world at the time. They had kicked Spain out of the World Cup, and forced the Argentina team to a penalty shoot out before bowing out in the Italia 90 World Cup. My beloved Northern Ireland played them in 1990 in Belfast and I was there. Little did I know as a naive 10 year old, that 18 years later I’d make the trip for the FIRST EVER Northern Ireland match in Yugoslavia after the break up of the Balkan states and the regime of one Slobodan Milosevic. 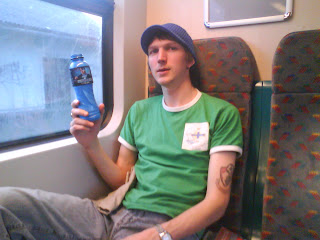 It wasn’t my culture, history and enthusiasm in my mind that day. It was pure sentimentality. If you’ve seen the fillim (movie) Back To The Future, you’d know that fate and things that happen are often absurd. We just take everything for granted, all the time. I’m always thinking and perhaps that is what destroys my method of thought. This time my eyes didn’t deceive me, and suddenly the country of Slovenia was the next one to be visited on this ongoing bandwagon of luxury I seem to lead. The preparation began in January 2008. With a broken foot and sidelined from my job, I booked a £42 (ish) return from Birmingham (England) to Trieste (Italy). It was a cheap and simple way to get to the former Yugoslavia. I was on my way to Slovenia and like a child I was very excited… 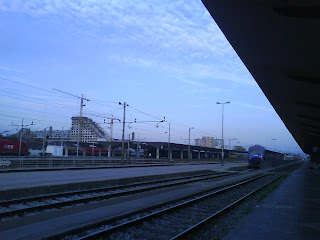 A post on this blog reveals how I ended up at Trieste train station for my 2 pm “train”, which ended up being a bus, as I got a bit confused. Soon we were on this “party bus” through hills so high I dreamt of clouds, friends so real we make each other laugh, and countryside so gorgeous, you’d think you were fucking dreaming. Well you weren’t I wasn’t and here we were on a bus from Italy to Slovenia. I wouldn’t have dared to do that back in 1990 now would I? Imagine a 10 year old travelling to Yugoslavia pre-break up. Those hills saw us pour out of Italy and wave goodbye to the scenic Trieste, those friends who make me laugh are Graham Anderson, John “Vive le J Hart” Hart, Andrew “Moby” Milliken and Nial “Nolers” Coulter, four fine Northern Ireland fans now living in various parts of England and Scotland. On the party bus, Moby leant me a beer, put on some classicly unfashionable shades and began singing Ocean Colour Scene songs on a quiet bus. 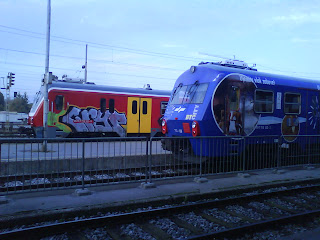 I wore a green wig, had sweat in my armpits from the previous nights alcohol (probably) and was my usual hyper self. If you don’t see me like that, then something is wrong, or as Pulp once sang “something changed.” People DO change me, and I like it when they do, it makes me realise bad things about me in life. On this particular day, nothing was bad, we got this excellent bus to Ljubljana, which wasn’t full, was really relaxed, the driver was excellent, the music mine, the conversation Mobys, the border was Yugoslavian. Not that it was majorly apparent. No border checks, no passport stamps, it wasn;t even obvious. But hold on…Jonny Blair was now in Yugoslavia, well the former Yugoslavia. For the first time. Hello Slovenia. Severna Irska is here. The first place we stopped seemed to be the town of Koper, near the border and up some mountains. Then it was on to Ljubljana, I think the total journey time was 2 hours and 6 minutes or something… 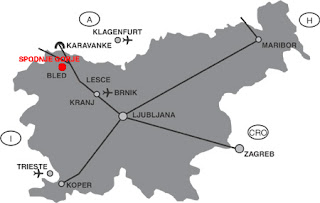 Moby told me on the bus “Jonny do you ever shut up?”, and there is an honest answer to that: “Yes, when I’m with people I don’t like or don’t appreciate, then I shut up!” When I’m with people I like and enjoy I’ll never shut up. Life is much too short for that. Share some stories and wisdom with people. Let them enjoy you and you enjoy them. We can all contribute to each other’s smiles. Soon the bus had left us in the very spaced out city centre of Ljubljana, the capital of Slovenia! I got out, we got our bags and Graham and I said our goodbyes to Moby, Nolers and John, all of whom would stay in Ljubljana that night. Graham and I had however had a different idea, and decided we wanted to head north west to the small town of Bled. Bled in Slovenia is a breathtaking wee place, it must be seen, in fact we didn’t even know that before we went there! There were a few reasons for going to Bled, and from me these were:
1. You can go white water rafting there
2. The BBC (British Broadcasting Corporation) would be there to do some filiming and I love being filimed
3. There is a bar there called “The George Best Bar” and George Best is a Belfast hero of mine
4. I wanted to experience Slovenian trains
5. To do something different on route to a Northern Ireland away match. 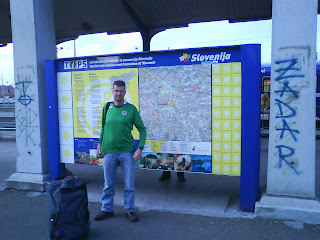 Once at Ljubljana station, where the bus left us, we then had to find the train station. Well that was easy – they were both pretty much the same place. Then we had to find the next train to Bled! That was just as easy. In my ignorance I called into the train ticket office and admitted “I’m really sorry I cannot speak Slovenian”, the guy there was great, he spoke some English and helped Graham and I, saying yes there is a train to a place called Lesce Bled, but not Bled. We really did wonder if it was the same place and booked two single tickets anyway. This is the time in life when mobile phones really are good and they really do work and sometimes we need them. We had a friend called Andrew Gilmore, and his wife Trudy who were both staying in Bled.We had spoke on the phone a few times and texted but never met, we were both Northern Ireland fans living in the south of England. Anyhow Andrew had organised the white water rafting in Bled for us, and we were due to meet him. Having never met, I can honestly say he is one of the nicest guys I have met randomly ever. For here’s why. 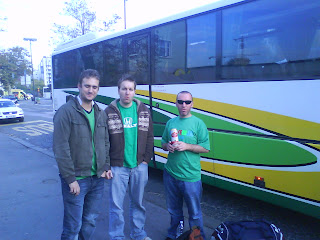 Him and Trudy had hired a car and they offered to pick us up from the train station at Lesce Bled and take us straight to our hostel, the backpackers at The George Best Bar. So I called him and arranged it, before confirming by text message. Then Graham and I grabbed some soft drinks. I had a blue energy drink and was running on high metabolism and adrenalin! We moved over to the platform we needed for Lesce Bled and waited for the wonderful train. It was smooth, smart, sleek and graffited. It was the 17.42 train to Jesenice in Slovenia. Leaving from the capital city of Ljubljana, this train was full of business men and day workers returning home. Still, the train arrived on time, it looked good, Graham and I even got front row seats, enjoyed a relaxing journey through some darkeningly picturesque countryside and drifted away in this ex-Yugoslav world. 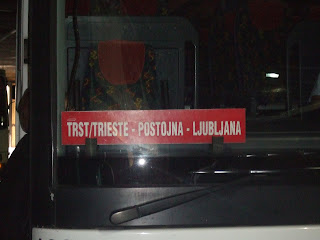 The conductor checked our tickets as we stopped in some really random stations. If you picture its Northern Irish equivalent, the train would stop in the Craigantlet Hills or by a field in deepest Newtwonards. More and more people got off and as we neared Bled, the train was emptying little by little. I noted that in Slovenia, you need to be near the door when the train stops, as they don’t give you a lot of time to get off and on. It’s a fast turnaround, and perhaps why Slovenian trains are so exact and rarely late. I only had one bag, a small rucksack (I always travel light) while Graham had a bigger bag which was more hassle, either way, we both neared the train doors as it slowed down in some obscure mountainage where a barely lit lampost scaled dimly over the station entrance. This was Lesce Bled… 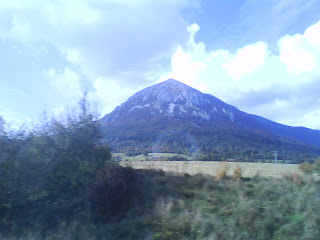 And there he was, waiting. Drumquin Andy, Andrew Gilmore in his bright green Norn Iron (Northern Ireland) tap accompanied by his pretty wife, Trudy. We were four together, SOE NISC in Bled. How odd, how bizarre, how amazing. These are the moments in life that I can reflect on, when I sit sipping a rum and coke watching my grandchildren. We parked at Andy’s hotel and dandered through streets which were paths, up back alleys that were mountainous, past houses which put British builders to shame, and past a river with ducks and wildlife. It was dark, but you could see the beauty. You could see Lake Bled, and we slowly worked our way through these paths and lanes until finally Graham and I rested ourselves in The George Best bar where the BBC were waiting to fillim us, and we had a relaxed beer and pizza to follow the long journey from Italy to the former Yugoslavia. We could finally relax, even if we did have some more beers, and were due to go white water rafting the next day. 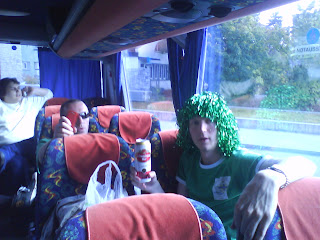 The next part of this story will tell of the never to be forgotten night in the George Best Bar in Bled, the white water rafting experience through some amazing countryside and the trip back to Ljubljana, where our cultured hearts wilted further into golden golden dreams…

What was it – A Bus from Trieste, Italy – Ljubljana, Slovenia. Then a train from Ljubljana – Lesce Bled station. Then a lift from Andrew Gilmore from Lesce Bled to their hotel by Lake Bled. Then a dander till that there George Best Hostel.

Train from Ljubljana to Lesce Bled:

Getting our tickets checked on the train: