While working in PR in London, I often heard tell of new, trendy and different types of bars that were opening. There are so many cool and different bars in London, that we are spoilt for choice. During the year while I worked in London I enjoyed the night life there, some of my favourite bars were the easy Princess of Wales at Charing Cross, The Portherhouse at Covi G and the cheap Green Man at Lesi’s Q. I had heard of the “Ice Bar”, from Vodka brand Absolut. A few people from work had been there, and I had planned to take a friend there back in May 2007. I got all the details from their internet website, but also from a short clipping in the London Lite. We were all set to go one Friday night in May 2007 when the lady pulled out. I had wanted to take her, and I had kind of wanted it to be a “date”, however she had been out with me a few times before, and in fact this was that month was the last time I saw her, almost two years ago. So fast forward… 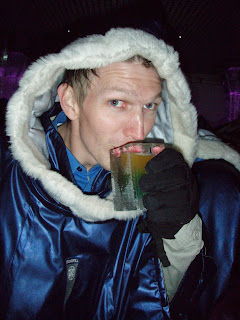 To Summer 2008 and an e-mail I sent to my German friend Mona, who was coming to stay with me last year. On the e-mail I suggested the “Ice Bar” and she seemed really keen. The only problem would be the timing and both getting time off work for it, but it all fell into place quite easily. Mona came to stay in July 2008, and I had two tickets for Kylie Minogue at the Millennium Dome (O2 Centre) in London in the first week of August. I booked the buses from Bournemouth and we both got the two days off work, and could stay for free at my friend Steve and Flavia’s place. On the bus on the way up, Mona and I talked about what we would do in London, and this is when she remembered my e-mail about the “Ice Bar”, which I’d forgotten about. We decided straight away we should go there, but we didn’t know where it was! That was easy, at Victoria Station I popped into the WH Smith shop there and opened the Time Out Bars and Clubs guide to London and wrote down the address and the nearest tube station, as well as the opening times. We were in luck – it was open Fridays from 12 noon. 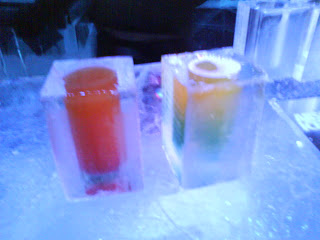 We got a tube to Oxford Circus and walked along Regent Street, where the Absolut Ice Bar was off. On the way we decided to stop for some photos, and then felt the need for a quick pint of Guinness in the O’Neill’s Irish Bar on Great Marlborough Street at the corner of Carnaby Street. After that we didn’t head straight to the Ice Bar, as I popped into the Soccer Scene in Carnaby Street and was happy that they had the Northern Ireland shirt in there! Then it was a simple dash across the road and off into an unknown side street with a small square, where the Absolut Ice Bar was found on Heddon Street. It had a red sign above it, and was also part of the “Zero Degrees” restaurant. Just before we went in, both Mona and I received calls from other people! I was on the phone to my parents there, and then we walked in through the doors! 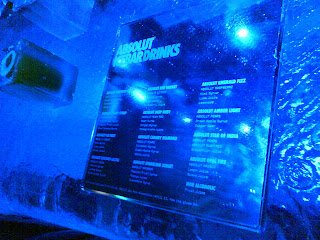 The first bit wasn’t cold at all, it’s just the trendy normal bar and the reception area, where we were surprised that they were letting UNDER 18s in! I thought it would be an over 21s venue, but apparently under 18s are allowed in as long as they drink non-alcoholic stuff! Strange. Anyway we paid our £12 entry tickets, which is actually not too bad for that one off unique experience. That price includes 1 cocktail from the menu in the Ice Bar. We had to wait about half an hour for the next session inside the Ice Bar itself, so Mona and I bought a Budweiser each from the bar at the front and just relaxed. 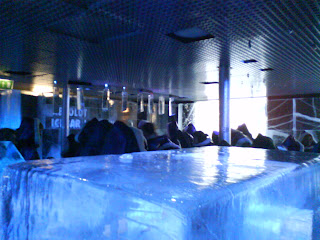 The beers were pricey in that bar, so I wouldn’t really recommend it, yet Mona and I had a nice chat there and on comfortable sofas, before a queue developed by the icy entrance to the main Ice Bar and we knew we were going to join it and go in. I made the most of the queue time by taking a short video, which is on You Tube below. Mona went first and as you approach the door and hand over your ticket, you have to hold your arms out to get your coat. TO KEEP YOU WARM! The coat reminded of two things:
1. An Eskimo from the North Pole
2. In 1998 when I worked in Tesco it was the freezer section coat. 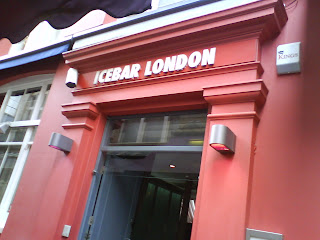 Either way we both now had these trendy navy coats on with silver, white and grey trimmings, and a pair of built in black gloves. Once we went inside the cold hit us straight away! We were cold. My feet and hands froze, not to mention feeling my penis (willy) which had gone so small ha ha! We took it in turns to take some nice photos and sit on the ice cube seats. There were about 30 people in there with us. It was mid-afternoon and outside the sun was beating down, yet there we were in this baltic freezing small room in central London having a great time. There was a queue for the bar at the start so we waited a while, enjoying the atmosphere and experience before deciding to get our drinks. We both had tokens for a free cocktail (well…included in the price). 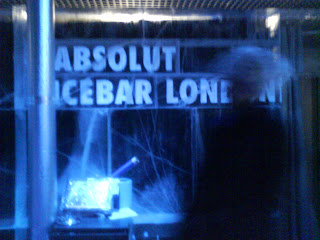 The range of cocktails was wide and varied, and looking at other people’s they looked amazing! In the end I think we choose the “Deep Ruby” and “Sparkling Sunset” drinks. Mine was the sunset, coloured green, yellow and blue. Mona’s was bright red. The cocktails were a decent measure and came in very cool, special “ice glasses” Everything in there really is made of ice! The glasses were made of ice and as we sipped our cocktails, you could feel the ice melting on the warmth of our hands. The bar staff were wearing a lot of clothes, I spoke to one of the guys saying “you must be FREEZING!!” and “How can you work here?”, but he said it was OK because they only do short shifts in the ice bit before heading back to the other bar or the restaurant, so they only really spend 30 minutes at a time in the Ice Bar itself. 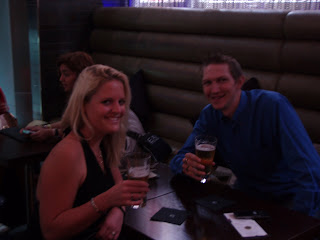 The bar man took a nice photo of Mona and I, and I have to say that the experience we were having was great! We both loved the drinks, the design of the small room and the entire strange feeling of being cold together in this little enclave in greater London. The sessions are timed in the bar, so that nobody gets too cold or risks hypothermia or pnemonia (never was good at Science, so which ever one applies…) and I think the limit was one hour. Anyway Mona and I had a lot to do, including more walks round London, some photo opportunities, a mini pub crawl and dinner before heading to south London for the Kylie Minogue concert that night. We took a last quick walk round the ice bar before finally facing the fact that we had now done the experience and wanted to be back to reality…and warm again. 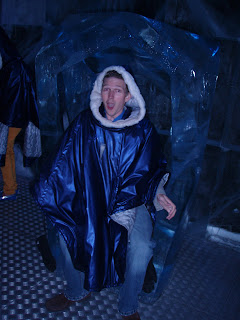 On exiting we handed our coats and gloves back in, before we had a quick toilet visit back in warmth. Then we realised we were hot again and stepped back outside into reality. It was a totally fantastic experience and well worth it. I would love to go back and do it again. Maybe this time I would like to go with a girlfriend so we can enjoy that passionate ice bar kiss, erect nipple and baby penis experience. I’ll leave that for next time, and if anyone wants to go there with me, let me know, we shall sort something out. It’s a great way to spend an hour! 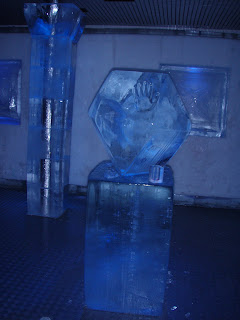 Once we left the Ice Bar we chose McDonald’s of all places before going through gardens with a carryout and then a short pub crawl before we both watched Kylie Mingoue live that night. I haven’t reviewed the concert yet, I shall leave that for another days, my hands are frozen…

Inside the Ice Bar: