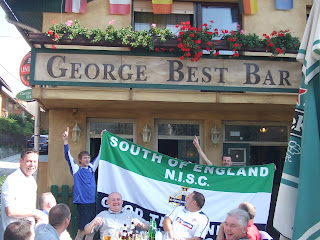 It all became a bit of a dream, and a rollercoaster ride which carries on forever. Who provides me with these memories and this sort of inspiration? I’ll never ever know, but this particular blog post sits high on my experiences from life. I’ll take you back to early 2007, when a mate of mine, Dave King took his girlfriend to the sublime location of Bled in deepest Slovenian mountainside. While there, Dave, from Downpatrick in Northern Ireland stumbled across a “George Best Bar”, surely not?! A bar in the middle of the former Yugoslavia named after Belfast’s finest son, the man who was “the fifth beatle”, the man where childhood dreams became reality, when he “set the world alight.” George Best. But who cares that there is a bar in Bled? Its not as if I would EVER go there was it? If I want to go to the pub, I’ll pop down till my local. Then a screwdriver was thrown into the works when my beloved Northern Ireland were drawn against Slovenia in the World Cup group. I was going, and come October 2008, I was there… 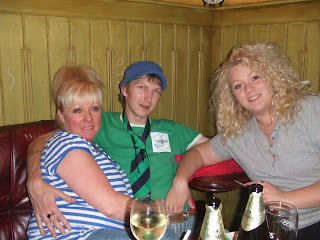 If you care to follow previous posts on my blog, you’ll note that I went from Birmingham to Trieste to Ljubljana and then onto Bled, all on a quest to find the George Best Bar, and even better, me and my great mate Graham Anderson had booked into the wee hostel there. It was in the middle of nowhere, yet it was the middle of something. I had got in touch with the Northern Irish BBC and arranged for them to fillim me and 3 others down the river of Slovenian mountains to go white water rafting, all on route to the Northern Ireland match. Anybody that meets me and thinks that my life of football is purely ALCOHOL and FOOTBALL is much mistaken. You may just find that I have a passion for the places I go, the people I meet and the sights I see. Its also in the things I do. I never ever want to be the un-noticed face in the crowd. At least, not for now… 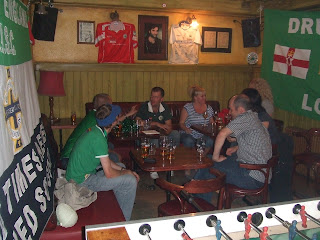 So the party train from Ljubljana arrived in Lesce Bled one Thursday afternoon with me and Graham Anderson on board. And there was Andrew and Trudy Gilmore in their rented car to meet us and take us to the George Best Bar. Un-nervingly, nonchalantly and totally expected in some ways, the little sight of “George Best Bar” shot up at us against a calm and breathtakingly gorgeous Slovenia sky. My heart grew fonder as we made our way inside this bar. IT had Northern Irish and Belfast references in any corner, and the BBC were there awaiting us as part of a documentary. We booked into the hostel upstairs and relaxed in the bar in the back corner where a Cliftonville Football Club shirt accompanied many Boxing memorabilia from my little country. Why? 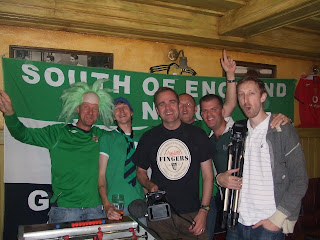 The answer came from bar owner, John Murray, an East Belfast man, who had given up his life in Northern Ireland to set his family up in Bled, Slovenia. I can’t blame him, a great life he leads now. And actually the boxing memorabilia is his. He is an ex-boxer…! We settled into the bar with the local Union lagers flowing, and there we met a few travellers. I spoke to another Graham, an English traveller from Bristol, who I invited to the Northern Ireland match. He couldn’t make it, but was enthused by our country’s passion for what is basically a shit football team. Its not about the glory, its about being there and being a true supporter. Nobody on this planet can ever take that away from me. I’ve spent most of my life on the Northern Ireland football team. We also met Tony, an Australian traveller who joined us for beers and enjoyed a bit of our craic. A Belfast girl, Holly also joined us, this turned out to be John’s daughter and her Belfast accent was strong enough for me to sip wine with her, while her Mum looked on. 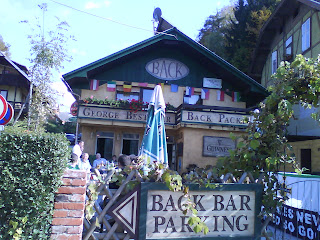 In between times, myself and Drumquin Andy (Andrew Gilmore) bonded and got to know each other. we must have been cut from the same stone. The guy is a fantastic person, and his pretty lady wife, Trudy has a true gent of a husband! I get jealous when I see couples like that! Me and Andy were telling each other stories all night and singing songs, interspersed by the BBC interviewing us. It was Nigel McAlpine from BBC NI and the excellent camerawork from Warren Bell that followed us round that night. Being a journalist (as I should know) is a 24 hour job. They almost sipped each pint with us, and got to know what we were like. This was all ahead of the following morning’s “Green and white water rafting army”, where we would be hungover in a raft through the rivers of the mountains and fillimed by the BBC. This night in the George Best bar, they fillimed some clips of us, to be included in the documentary, and I really enjoyed the company of Warren and Nigel. They are journalists that actually know what they are doing, know what they want AND build a rapport with people. That is an important part of my PR career. 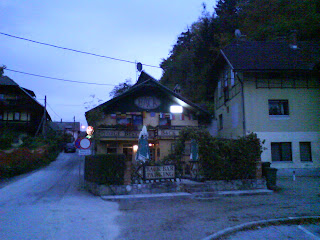 Then amidst all this Northern Irish ness, emerges a robust sincere looking figure wearing a T-shirt with the words “First Far East NISC” written on it. This was Neil Burnett, a member of the First Far East Northern Ireland Supporters Club. Based in Hong Kong, Neil had travelled all this way just to watch Northern Ireland. And he wasn’t even from Northern Ireland! An Englishman, whose best mate came from Cookstown, or maybe Ballycastle! Stories like this are what makes supporting a football team so incredibly interesting. Its the journeys, the people you meet and the memories. Neil took a seat beside us and told of how from Surrey, and supporting Charlton Athletic he is now travelling thousands of miles to watch Northern Ireland. I will invite anyone to watch a Northern Ireland match with me. It is an experience you would love. Football culture. 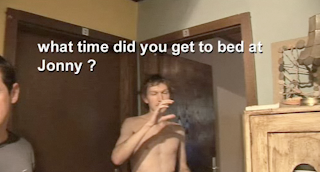 So that’s as surreal (almost) as an October Thursday in 2008 got for me. There I was in The George Best Bar, Bled, Slovenia with our SOENISC group, some other NI fans, the BBC, the bar owners, a former professional boxer, a shirt signed by Norman Whiteside, beer that we got billed for at the night’s end. As the bar closed, we were invited back to a house just up the road to continue drinking, knowing we were up sharpish at 9 am to be fillimed rafting in the mountains at 10 am by the BBC. Graham and I kept the bandwagon going a little bit longer and I ended up (as the BBC clip shows) getting to bed at 7.14 am. they fillimed me topless before I got a shower the next morning. In truth I quite enjoyed that…as for the previous few hours, where for one night only, Belfast girl Holly and I got close on a sofa. With her hands on my penis and my hands on her breasts, it was surely a dream to far for this culture driven man here, and so the story remains as it is. We got our sleep and then it was off to the rafting, which will take up a full blog entry of its own sometime. 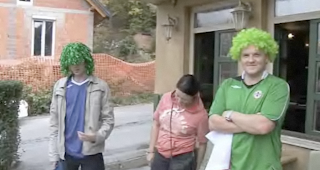 Where was it – The George Best Bar and Back Packers, near Lake Bled, Bled, Slovenia.

What was it – Somewhere random to stay the night, a bar named after a hero and some frolics in the peaceful surroundings.

Why was it – Because life’s fun.