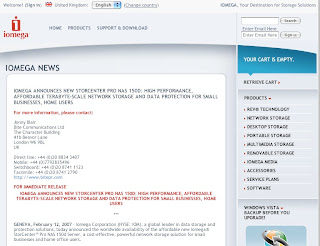 While working in London for Bite Communications, I also did some PR for prestigious data storage specialists Iomega. My time in PR was taken up largely by Apple, Sonos and CPP, but every now and then, my monthly hours on my timesheets would include Iomega, a leader in data storage, based in Switzerland. It was deemed that I would do some good work for Iomega given that I had done quite a lot of technology PR in my first few months working at Bite. However time spent on Iomega was hard to find, as I squeezed my hours to fit my schedule, or more often than not, I stayed late in the office. I didn’t know a lot about Iomega to start with, but workmate Paul Thompson showed me all the products we had, and the new releases. I sent some of the press releases out, and for a month or so, became the UK point of contact for Iomega. I worked alongside Paul Thompson and Clare Gayner at Bite to do this, and although they often chased me for coverage, it was actually quite easily run. The journalists all knew about Iomega.

At the start I would send out data storage systems to journalists for them to review in the magazines such as Computer Shopper, iCreate and Micromart. At the time I was getting more and more into computers and storage, and even had my own hard drive back up. You need it for when your computer breaks! I would encourage EVERYONE out there to make multiple copies of photos, files etc. that are important. Otherwise you could lose them forever. Use Iomega hard drives. They really are a world leader, and mid-priced in the market. The company itself was based in Geneva, Switzerland so I never actually met the client, though I did appear on their website on a few press releases (see images posted). Paul Thompson was lucky enough to fly to Switzerland and do a presentation on the UK team while I worked there, but soon Iomega had taken the account away from Bite and decided to do their own PR, and save money and resources, so the account was gone by March 2007. It was good fun though, and although I wasn’t the best person in the world at doing it, I enjoyed it and will cherish the brief time I spent working on the brand “Iomega.” 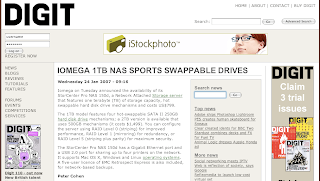 What did I do – Sent products out to journalists, phoned journalists, sent press releases, took enquiries and helped with the account maintenance in house for Iomega.

A video of Iomega: