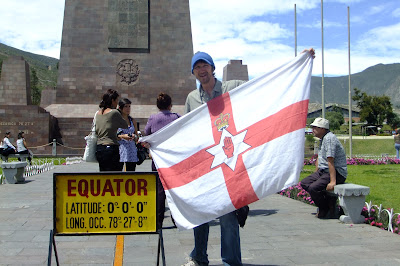 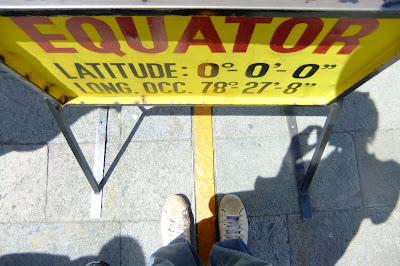 I had crossed it by plane every time I’d done it before, and Ecuador is one of three South American countries that straddles the equator, but by its very name, its probably the best one to cross it on. For those lacking common sense or basic knowledge, Ecuador means Equator. 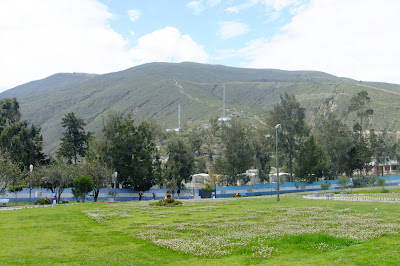 On a hot Wednesday morning, around 11 am, I made it back safely into the Northern Hemisphere, some 25 kilometres north of Quito (pronounced Keeto by the way) in a custom built city on the Equator known as “Ciudad Mitad Del Mundo” (City In The Middle of The World). 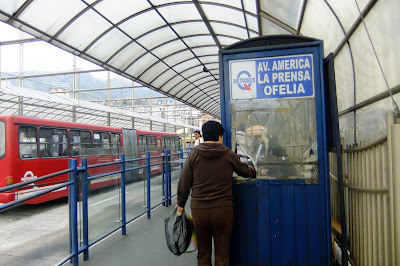 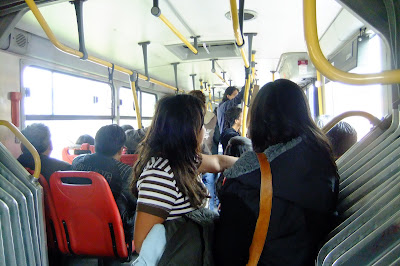 The route to the middle of the world was easy. From my hostel (Colonial House) in Quito’s Old Town, I caught a bus from Mariscal all the way east to Ofelia. At the busy terminal there, I simply caught a bus for “Mitad Del Mundo”, once the bus reached an epic roundabout with a city of murals in behind, it became obvious that I was on top of the world. 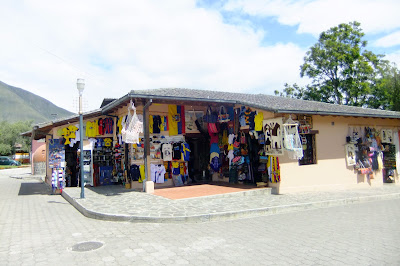 More touristy than you would imagine this to ever be. And I had to pay $2 US Dollars to get back into the northern hemisphere! That was fine given that me flight to the southern hemisphere a year earlier had cost way more (that was Kuala Lumpur – Sydney incidentally). It was worth every cent as I was on the same side of the world as my family and homeland for once, though it would be a year until I would see them again (when they visited Hong Kong). 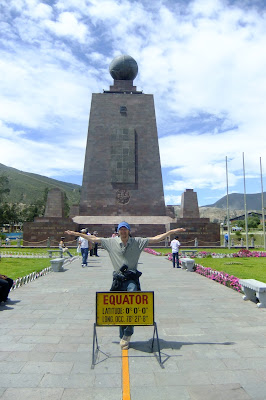 Once I paid my entrance fee into Ciudad Mitad Del Mundo, done my typical “on the Equator poses”, visited the church in both hemispheres, I went into the first of 2 museums. 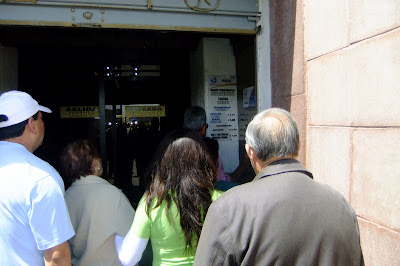 This was the Ethnographic Museum, the tower itself sits in both hemispheres. 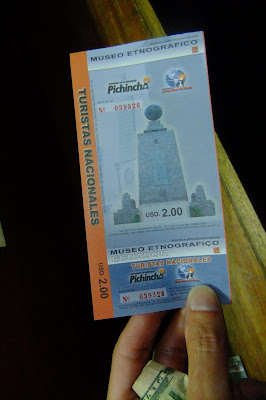 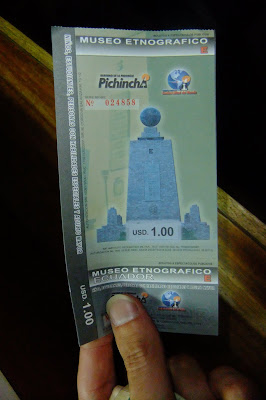 My ticket for the Museo Etnografico. There were two tickets – one for museum entry – one for the top floor viewpoint. 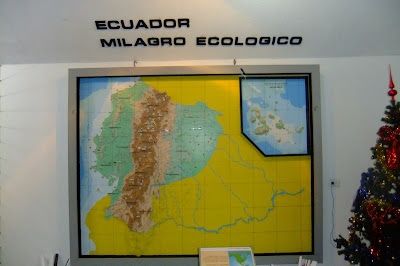 Photos were actually banned inside the museum, but I took a fair few anyway. 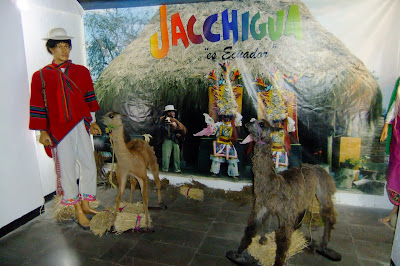 One of many displays in the museum. 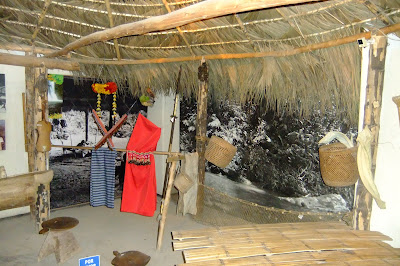 A history of the formation and old housing styles in Ecuador was the main point of the museum, which spans about 5 floors on the walk up the tower. 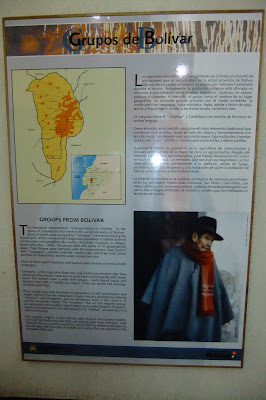 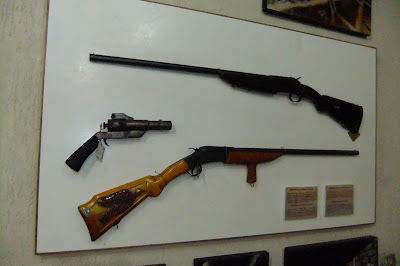 Although the museum was interesting and my only real read up on Ecuadorian history during my stay in the country, I was much more keen on the view from the top of the museum, which was a tower. 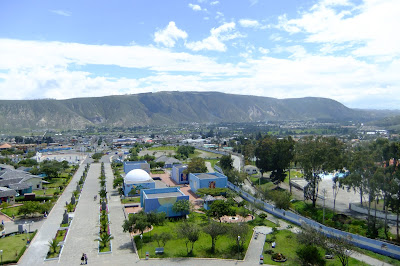 And it lived up to expectations. That was my first glimpse of glaring at the middle of the world, from a height. Not bad eh? 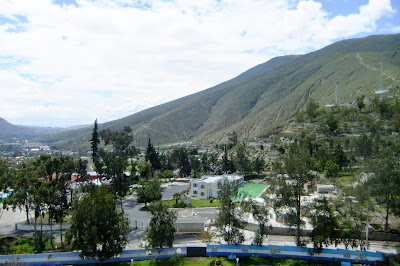 To my right, this is the southern hemisphere. 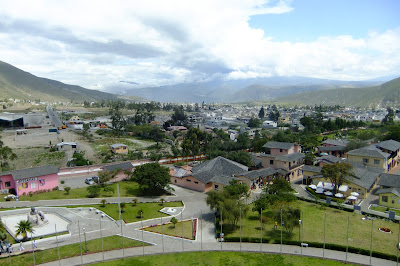 To my left, this is the southern hemisphere. I seriously hope I’ve got those two the right way round… 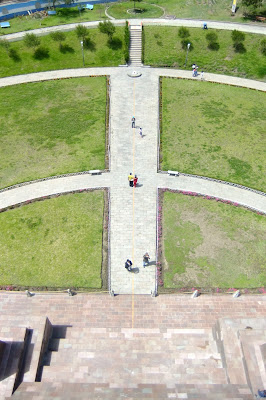 Staring down on the equator, you can see the yellow line that marks it. 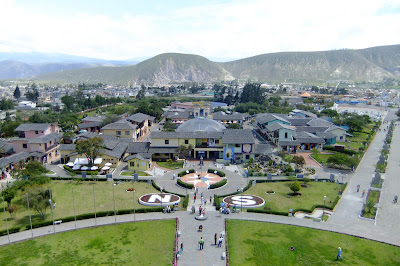 Staring at both hemispheres, clearly marked by the N and S. This journey and experience was much better than the photos show. I was living a dream doing all this. 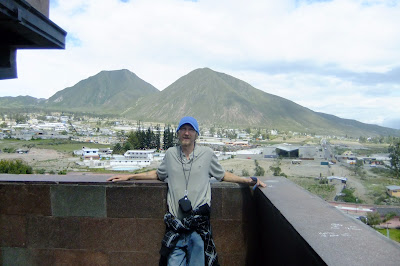 As mentioned before Quito is colossal, and is the world’s second highest capital city (I am lucky enough to have been to the top 3), and these mountains are just 30 kilometres from Quito itself. Here I stand in awe of the view around me. This was taken in the southern hemisphere. 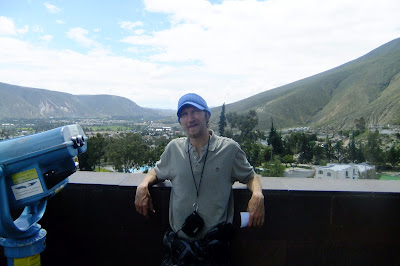 This photo was taken in the northern hemisphere. 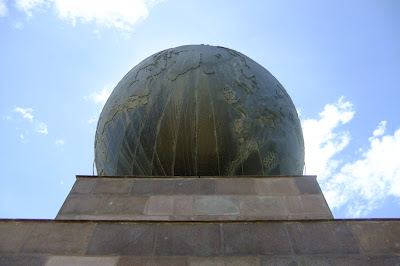 A globe is on top of the monument, with a map of the world on it. This globe itself, is right in the middle of the world. 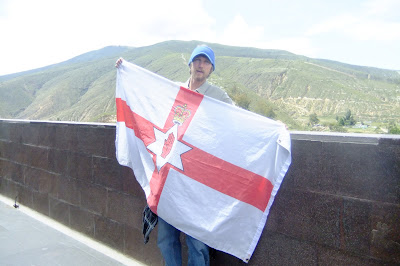 My Northern Ireland flag goes with me everywhere, time for one last photo of it in the southern hemisphere, ironically this photo is back to front, so could probably be viewed from the correct way round in the northern hemisphere. 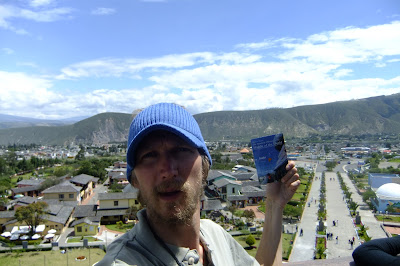 There weren’t actually many tourists who had paid the 3 point fee. 1. to get into the city to “cross the equator” 2. to get into the museum tower and 3. to get out on deck. It was $5 US Dollars to do all 3 and I thought I’d not be there again, so worth every cent. I took a self photo from the top as there weren’t many others around. I had the freedom of both hemispheres for a few lonely moments. 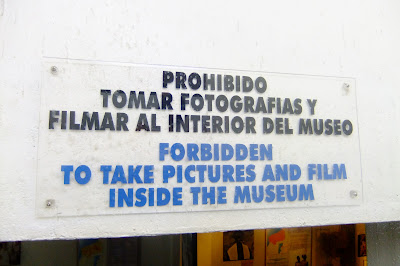 I took a photo of the fact you’re not allowed to take photos. I wondered why you couldn’t take photos inside. 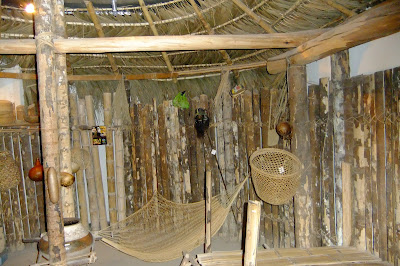 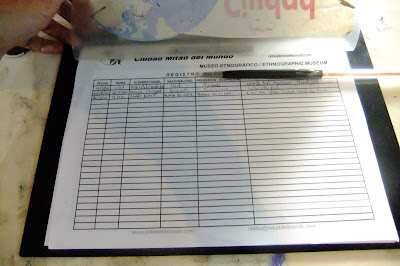 I make a habit of signing guestbooks, today was no exception. 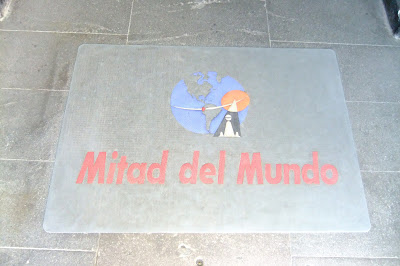 I was safely back in the northern hemisphere and after the Museo Etnografico, I decided to do the other museum, a lot more fun, and situated mostly in the northern hemisphere. The other museum, called Museo Intinan includes some tricks and facts about this bizarre area around the equator, such as what way the water goes and why we weigh less on the equator as well as a flirty guide called Yvette who told us some stories about swimming naked in Ecuadorian lakes and scarey fish that swim up your willy or vagina…that will come in part 3.
Hemispheres Visited – Both the Northern and Southern
Countries Visited – One (Ecuador)
Cities Visited – Quito and Ciudad Mitad Del Mundo
Transport Used – Buses only
Strange Currencies – US Dollars
Nationalities Met – Ecuadorian, Canadian, English, Dutch
Part One of The Trip Is Here:http://jonnyscottblair.blogspot.com/2011/10/ciudad-mitad-del-mundo-journey-to.html
Part Three is still to come…
Key Song –
MACROSS FRONTIER – NORTHERN CROSS:
MY VIDEOS –
LEAVING QUITO FROM OFELIA BUS STATION:
MY BUS THROUGH QUITO TO MITAD DEL MUNDO:
VIEW FROM TOP OF MUSEO ETNOGRAFICO:
MIDDLE OF THE WORLD MUSEUM:
CROSSING THE EQUATOR – CENTRE OF THE UNIVERSE:
Join 15,017 Monthly Readers! If you enjoyed this article and LOVE travel and SAVING money, get e-mail updates from Don’t Stop Living – a lifestyle of travel! (It’s Free) 😉 Jonny