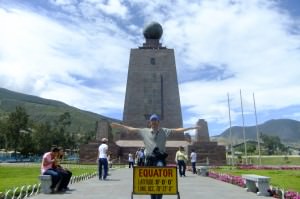 World Borders on Don’t Stop Living – standing on the Equator at Ciudad Mitad del Mundo in both hemispheres. 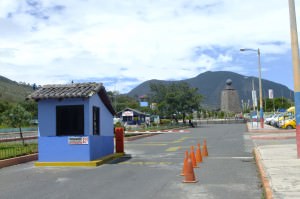 The Equator obviously stretches all the way through Ecuador, so in theory you could cross it and not even know it, but I loved the idea of knowing where it was, and of course doing the traveller thing and getting my photo taken on the Equator itself and of course in both hemispheres. For that reason, and since I was based in Quito (Ecuador’s capital city), I decided to head to Ciudad Mitad del Mundo. Ciudad Mitad del Mundo literally translates as City in the Middle of the World, and that’s exactly what it is – it is a “city” which sits on the equator and naturally has houses in both. However it’s not really a “city”, more of a custom built town in fact. But that aside, I headed off on my travels to it… 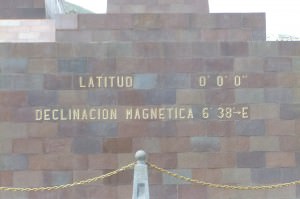 How do you get to Ciudad Mitad del Mundo?

Since I went there from Quito (and I’d imagine most travellers will), I’ll tell you how I did it – just copy me and you’ll get there. Quito is a colossal city – it stretches far and wide and can be easy to get lost in (I didn’t – but I’m just letting you know that you can get lost there). I stayed in the Old Quarter of Quito. Quito is around 25 kilometres south of the actual equator. To get to Ciudad Mitad del Mundo from Quito you will need to head to Ofelia Bus Station, which I did. I was backpacking and on a cheap budget so I did it all myself, travelled alone and found the route as I went. It wasn’t too difficult. Here’s how to do it: 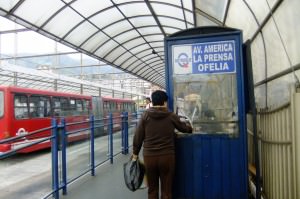 – Head on a blue line bus north out of the city of Quito in the direction of Estacion Ofelia. On the map I had, it also shows that the football stadium Estadio LDU is here. I boarded my first bus at Estacion Marin Central. The bus ticket was less than 50 cents (the currency in Ecuador is the US Dollar). You buy at the booth then go through the turnstile. Once you are on this bus, the good news is you don’t need to look out for your stop – just stay on it until the end. Ofelia is the last stop! That journey should take you just over an hour – I did mine in rush hour. 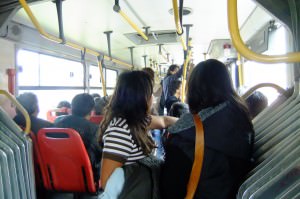 – Once you are at Ofelia bus station (it’s quite a big station) look for the bus that says Ciudad Mitad Del Mundo on it. When I was there in 2010, this bus was fairly easy to spot. I managed to get a bus within 5 minutes. 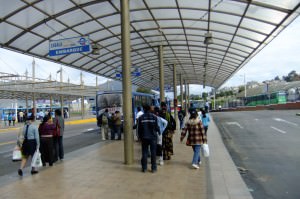 I didn’t need a ticket, nor did I pay to get on. During the journey they come and ask you for the money – it was less than 30 cents. The bus actually heads to Pululahua – the famous volcano (worth seeing as well) but for Ciudad Mitad del Mundo you should get off before that – you’ll be out in the countryside miles from Quito and the place to get off is at a roundabout. I was the only tourist on my bus – it’s a local bus so I was the only one that got off here. I simply asked the driver to stop. There are mountains all around you. That’s how you get there (and you follow the exact same route back by the way). This bus took around 45 minutes. 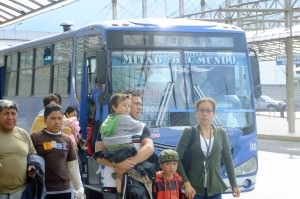 My bus to Ciudad Mitad del Mundo from Ofelia in 2010

I actually wrote a mega post on this trip a while back, and while it’s more descriptive than informative it’s also worth checking out: Getting to Ciudad Mitad Del Mundo 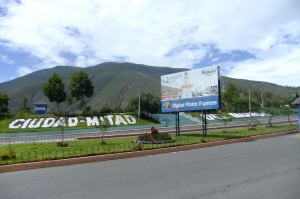 After getting the bus from Ofelia you will arrive here where Ciudad Mitad del Mundo is embedded into the grassy banks. You are within minutes of crossing the Equator!

How much does crossing the Equator by foot at Ciudad Mitad del Mundo cost?

It costs $2 Dollars (US). This might sound ridiculous to some of you, but remember, Ecuador is not a rich country and this is a monument and tourist attraction they have set up, so in seriousness it’s worth paying – this is the cost just to get into the town itself. 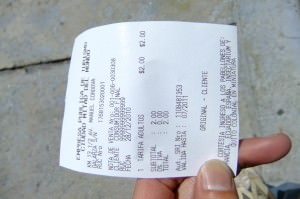 My ticket to cross the equator on foot and make it back safely into the Northern Hemisphere. $2 US Dollars at Ciudad Mitad del Mundo

You can of course cross the equator anywhere you want for FREE but there isn’t a line drawn, nor is there an obvious Equator sign. So just pay it and enjoy it. You get a ticket at the entrance.

What is Ciudad Mitad del Mundo?

It is basically a ‘fake’ town – yes a place constructed for tourism purposes as I see it. Yes, people live there and it’s a town, but you can’t help but feel the artificial vibe of a town created only because it lies on the Equator. Don’t let the fact it’s slightly fake take away from your experience – you will love it! The town has a church, a town square and a load of souvenir shops. Everything is written in Spanish and English too, which helps with the tourism aspect of it. Even bumped into a guy from the US who didn’t know that the name Ecuador means Equator!! 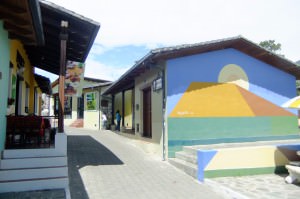 The streets of Ciudad Mitad del Mundo in Ecuador

What is there to do at Ciudad Mitad del Mundo?

Once you have paid your $2 US to get into Ciudad Mitad del Mundo the main thing to do is crossing the Equator on foot, marked by an obvious line, a sign and flooding with similar tourists doing the same thing. Aside from getting your photo on the equator and doing both hemispheres, here’s a short list or a top 11 on things to see and do in and around Ciudad Mitad del Mundo, it’s a great spot actually!:

1. Visit a church which has the equator running through the aisle, with half the congregation in the northern hemisphere and the other half in the southern hemisphere. Quirky, even if slightly ‘fake’. 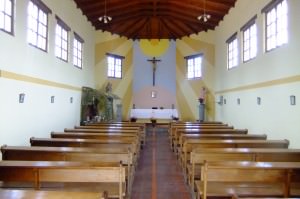 Crossing the equator on foot: visit a church which sits in both hemispheres

2. Pose by the Equator sign and stand on the equator. A must do really… 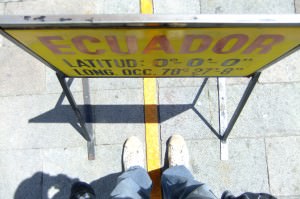 Here I’m standing in both hemispheres on the Equator/Ecuador

3. Go inside the Museo Etnografico – basically a monument in the middle of the world, built in 1979 and instantly recognisable. You pay $3 US Dollars to go up it, but it has great views, sits in both hemispheres and has a 4 storey museum. You may not get another chance in life to see the world from the Equator. My report: 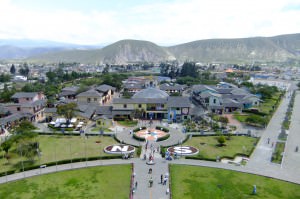 Head to the top of the Museo Etnografico for a view from the middle of the world!

4. Go to the Museo de Sitio Intinan – a museum just outside the town itself where you can balance an egg on the equator and watch how water goes down the plughole a different way on either side of the equator. You also have to pay $3 US Dollars to visit the museum. I have to say it was worth it. My report: 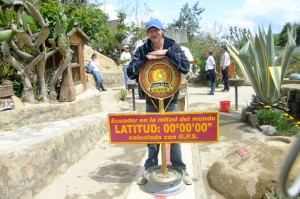 5. Have a beer and a bite! There are tons of restaurants in Ciudad Mitad del Mundo – admittedly all touristy and much more expensive than those in Quito, but hey, this is a great moment for a beer! 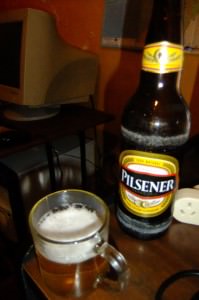 You can have a beer and a bite in Ciudad del Mundo in a restaurant in the middle of the world. In Ecuador I drank Pilsener.

6. Weigh yourself! Apparently you weigh less on the Equator – something to do with gravity or forces. You have to pay for it though.

Weigh yourself on the Equator – apparently you weigh less. One for the fatsos to feel confident about.

You can get your passport stamped inside Ciudad Mitad del Mundo

8. Post a postcard. If you know what I’m like, I post postcards to my brother and family from everywhere I go, so this was another special one.

Post your brother a postcard from the middle of the world!

9. Buy some souvenirs. Despite travelling light, I am still a sucker from cheap, small souvenirs and I collect flag patches and general patches from every city I visit. They had an Ecuador one and a Ciudad Mitad del Mundo one so I bought them! 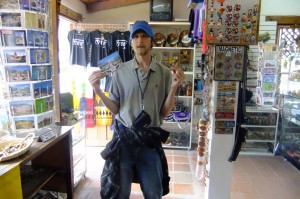 10. Visit Pululahua. The nearby countryside known as Pululahua has a volcano and a hike. I didn’t stay overnight but the option is there, there is a hostel inside the actual crater! The bus from Ofelia heads all the way to Pululahua by the way and it’s nice to say you stayed overnight in the middle of the world. Make sure you head to Mirador de Ventanillas where the crater begins.

11. Visit Rumicucho. If you’re into your ancient history, this is a very small pre-Inca site, north of Ciudad Mitad del Mundo, so it’s in the northern hemisphere, just before Pululahua. Note – if you have just arrived from Peru, this will seem somewhat mediocre in comparison to places like Machu Picchu, but none the less…

Ruins at Rumicucho in Equador

So that’s a rundown of my trip to the middle of the world in Ecuador. It’s a fantastic place and another of my travelling highlights for sure – crossing the equator by foot is something I had always wanted to do, and now I’m gagging to do it again, but hopefully in Africa next time. Here’s a list of countries that straddle the Equator (believe it or not but Equatorial Guinea does NOT lie on the Equator! Neither does red herring Qatar):

6. Republic of the Congo

7. Democratic Republic of the Congo

Another point to note is that when crossing the equator by foot at Ciudad Mitad del Mundo you are not entirely sure this is the real equator, it is rumoured to be about 300 metres north, so I walked for half a kilometre up the road to see if there were any additional ‘real’ equator markers, but there weren’t so while I know I crossed the equator on foot, I have no idea exactly where I did it – the touristy thing could be a total fake after all…but you will still love it. Safe travels and happy border crossing!

Some of my Videos from my trip to Ciudad Mitad del Mundo:

In the city in the middle of the world at Ecuador:

Crossing the equator by foot at Ciudad Mitad del Mundo:

Balancing an egg on a nail at Ciudad Mitad del Mundo:

At Ofelia bus station in Quito waiting for my bus to Ciudad Mitad del Mundo:

My bus to the middle of the world: