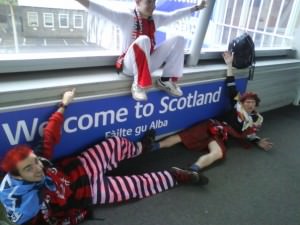 World Borders: me and some mates at the Welcome to Scotland sign back in 2008!!

On my series where I cross borders of the world, this ranges from passport stamping borders, internal country borders and indeed the Equator. While England and Scotland are very much separate countries, they use the same currency (British Pound) and are both part of the United Kingdom. That doesn’t stop there being a border though! I’m going back a few years with this post on my last trip from Scotland to England! I was with some mates on the train from Glasgow to Carlisle. We went there for a football match. While the border passed by fairly un-noticed, the trip didn’t. Not so much a “how to get from Scotland to England” but a general overview of our trip and some decent ideas for you, what’s more impressive is the landscape in the north of England… 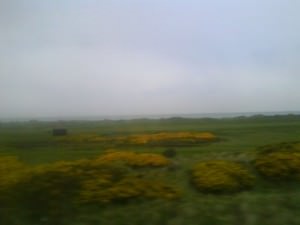 How to get from Scotland to England:

Get on a train, get on a plane or drive. You don’t need me to tell you…really you don’t! Oh OK then, here’s the route we did, we went by train and it was an excellent journey:

Train from Glasgow Central to Carlisle

Book it in advance on the internet and print off your tickets, or collect them from one of the listed train stations, or book them on the day you leave. Booking them on the day is normally more expensive. You can currently buy tickets for under 10 pounds online for a single ticket. As cross border trains go, that really ain’t all that bad you know! 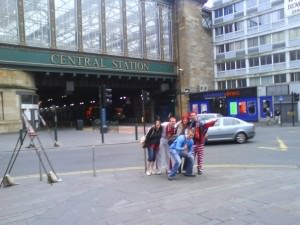 What Visas do you Need to get from Scotland to England:

Zilch. Until Scotland becomes independent (which may or may not happen), the visa regulations remain the same for both countries. If you’re legally in one of them, you’re legally allowed in the other one (this goes for Wales and Northern Ireland too by the way).

Is there a passport check or stamp available?

No, the train glides past the border without you even knowing where it is! You are now in England, and will probably arrive at Carlisle station. 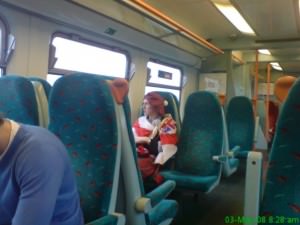 Admiring the countryside from the train because there are no visa checkpoints between Scotland and England.

OK, so we were on a football trip but we got a bit of sightseeing in on the trip, these are my top 2 ideas once you’ve crossed the border into England (and before you head as far south as Manchester):

1. Carlisle Castle – not sure why this stuck out but we loved it. A medieval castle in Carlisle which once acted as the border in some way. Your train will stop in Carlisle first, more than likely. 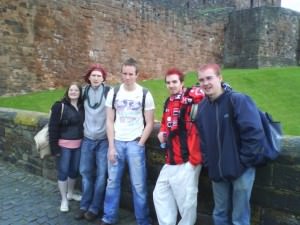 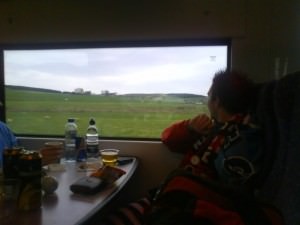 You can get to the Lake District by train! Carlisle, Penrith and Oxenholme are the main 3 stations.

I will be writing more about these places separately at some point so keep your eyes peeled.

Places to stay once you’ve arrived in England:

1. In Carlisle you could try a local Bed and Breakfast or good old Travelodge which is where we stayed in Carlisle.

2. For the Lake District, treat yourself and seriously relax, there’s a really decent site here:

And yes, the views and fresh air in the English Lake District are fantastic. 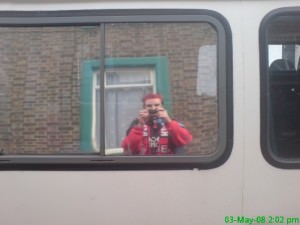 OK, so that’s it on this occasion – I mentioned that all border crossings are different and the Scotland to England one is epic for the landscape and the fact that…you don’t even need to brandish your passport. I’m dedicating this post to my friends who I haven’t seen in a while – they joined me on this epic journey. Patrick Hogan. Dan Darch. Neil Macey. Gemma Mornin. Corinne Luescher.

A bit of football in Carlisle: