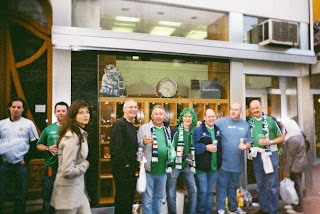 In 2005 I had gone to Austria, Vienna to be exact with Northern Ireland fans to watch our last World Cup Qualifier with Austria. It was an away trip that I went on with my Dad and some of his mates. I knew a few of them, but not all of them. One of the lads was big Johnny McKee, whose son Adam played football with my kid brother Daniel. 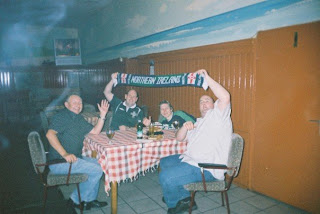 It was a great few days in Austria despite the 2-0 defeat for Northern Ireland. We enjoyed cheese on toast in a Turkish bar, a boat cruise of the Danube and a champagne limosine to Belfast City Airport (while it was still called that, and while George Best was still alive). 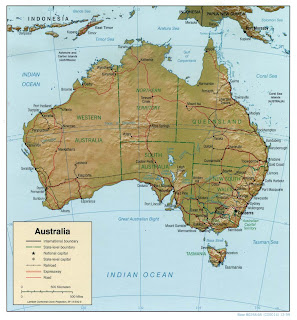 Somehow 5 years later it led to a reunion of sorts. My parents had kept in touch with big Johnny McKee, who had since emigrated to Australia with his family, and his dog, Bruno. They passed on his e-mail address, knowing that he lived in Brisbane in Queensland. By random coincidence after 8 months in Australia I was headed to Queensland to stay with Owen Millar. 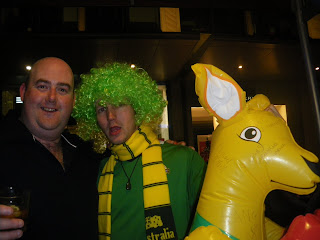 That meant the reunion would be inviting Johnny down to the Brisbane Bangoroo NISC launch one Friday night. There I met up with Johnny again, and he invited me round to his place for some food and drink later in the week, knowing I was hanging around in Brisbane for about 8-9 days. 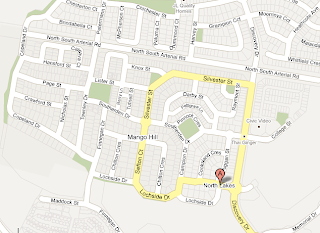 Johnny lives north of Brisbane in an area called North Lakes. I told him I had my car and he had invited me up on the Thursday night of the following week. On route I stopped at the excellent Glasshouse Mountains, a town called Beerburrum and to watch the sunset at Scarborough. 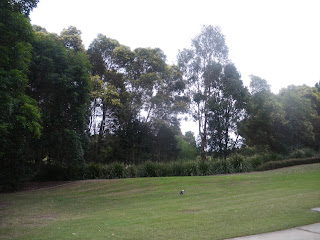 By around 6 pm I was driving around North Lakes looking for Johnny’s house. I eventually found it, on a small street in a nice housing estate in the area of North Lakes. The housing estate I would say was a mixture between something in Bangor, Northern Ireland and the impression you get from Pin Oak Court (better known as Ramsay Street) in Melbourne (scene of TV Show, Neighbours). It was a nice modern wee area.
On arrival I was greeted with typical Ulster hospitality. “Bring your stuff in, make this your home for the night, and here’s a beer!” said Johnny and Vivian (his wife) when I turned up. I was staying the night in a nice comfy bed in the back room. Harry had let me have his room for the night, kindly. 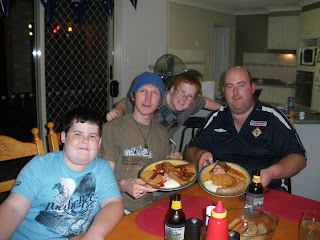 So Johnny had supplied me with XXXX Gold and we chatted while he cooked. Johnny could probably cook with his eyes closed having owned chip shops in Northern Ireland. What was even better and the biggest surprise of all was that he was cooking an Ulster Fry! Oh really?? 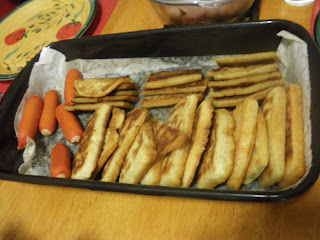 Yes and there was me thinking you could ne buy soda bread and potato bread in this land down under. I was wrong. Well, you can actually buy it at a high cost, but this wasn’t Australian made sodas and potato farls. This was genuine Belfast grub. It had travelled on a plane and been frozen in their freezer! What a great idea. You miss that sort of food when you’re away from Northern Ireland. 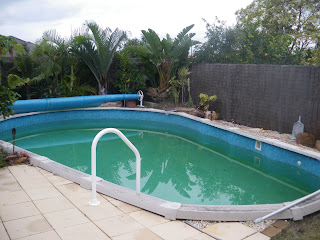 The house was excellent – modern and spacious, and with a swimming pool. We’re living in Australia remember! So we sat down for dinner. I had also met Bruno the dog, brought all the way and imported through quarantine at a high cost, here he was the Northern Irish dog in Australia! A bull terrier I believe, though my knowledge of dog breeds is seriously shit. 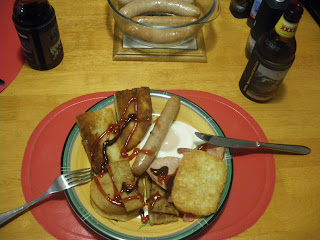 It was the full works. Sausages, eggs, bacon, hash browns and those two special ingredients of an Ulster Fry – Soda Bread and Potato Bread!! I munched it all and fairly quickly. Easily the nicest food I’ve had since leaving the UK. If you’re used to a certain type of food, you’ll always relish and enjoy it. I bet the tow boys, Matthew and Harry loved it as well. Adam had been out at football training.
Then I sat down in the lounge and caught up with Johnny and Vivian on how they had moved away for this better lifestyle in Brisbane. I agree that the lifestyle over here in Australia is much better than in the UK. The UK is full of obnockshis, posh, stuck up people who are working too hard for no reason whatsoever, maybe just to make themselves look and feel good. Life can be enjoyed just as much at a much slower, relaxed pace. No need for the rat race of London or Birmingham.
Having a house with a swimming pool would be a dream for most Northern Irish people. Yet here in Australia it can be done, and much more cost effectively. There is a world of opportunity in this land down under. Anyone who is willing to move here and take the plunge will realise that. As Johnny said “a lot of the Aussies are so relaxed and a lot more lazy”, which is only  a good thing for us, as we will come here prepared to work harder having come from a busier environment in the UK. 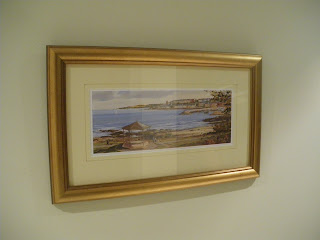 On the wall Johnny and Vivian had a painting from Northern Ireland which my parents had bought them. They moved everything over with them. 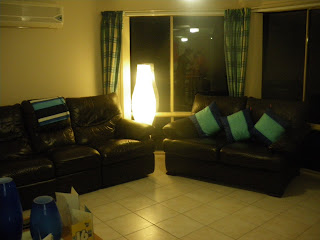 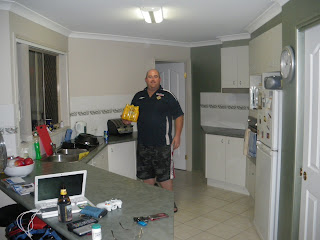 Johnny getting the beers in. I was treated to fantastic hospitality! I think I owe them a few drinks! 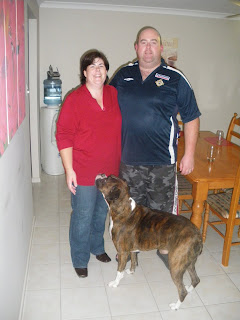 Johnny and Vivian in the dining area with Bruno. 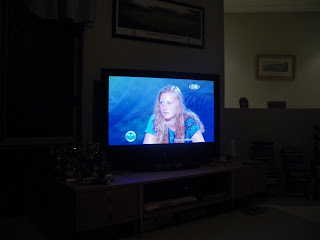 Watching Wimbledon on the LCD TV screen in the lounge. 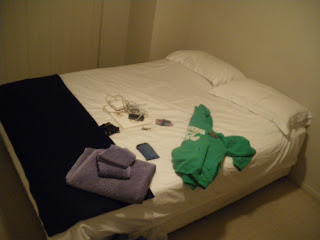 My comfy bed, in Harry’s room. 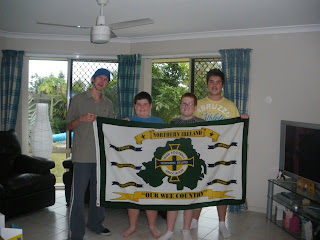 With Matthew, Harry and Adam and our proud Our Wee Country flag. 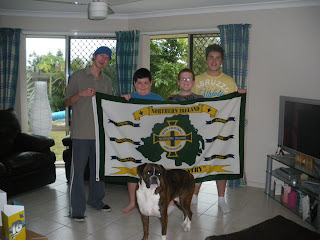 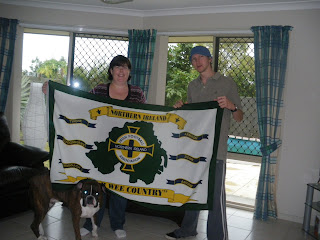 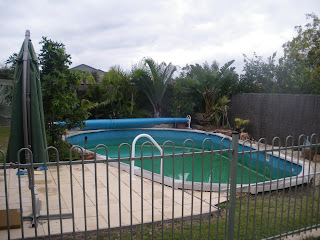 The token Australian swimming pool in the rear… 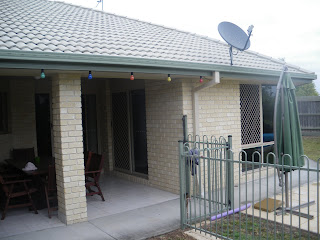 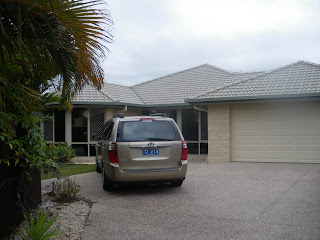 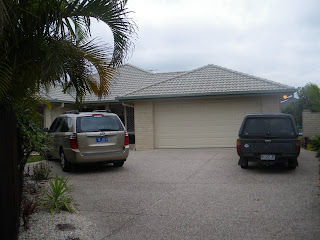 Driveway and my car parked at McKee house! 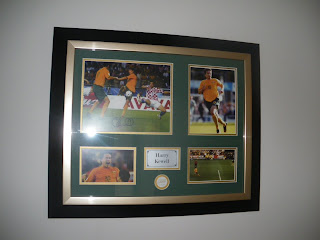 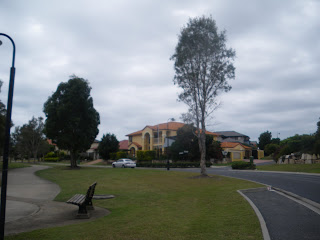 The North Lakes estate area where they live. 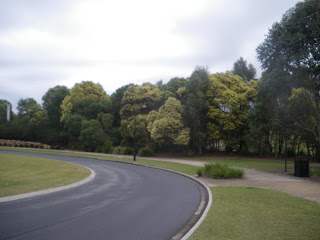 Pleasant setting at the back of the estate. 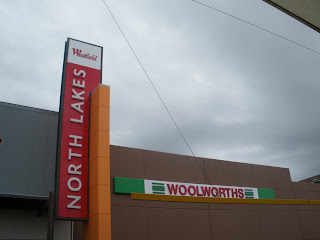 The North Lakes supermarket or shopping centre, only about 8 minutes drive.
It was a great night and one I won’t forget. You always miss a bit of your own culture no matter where you are. For one night it had been restored. A big thanks to Johnny and Vivian and family!
I headed back to Brisbane the next morning to stay with Owen for 3 more nights before moving back to my flat in Parramatta.
Where Was It – North Lakes, 25 kilometres north of Brisbane
Where I Stayed – Johnny and Vivians place
Food – Ulster Fry with a mixture of Belfast and Brisbane products
Drink – Tea
Beer – XXXX Gold – Queensland Brewed
Who was there – Johnny, Vivian, Adam, Matthew and Harry McKee, Jonny Blair, Bruno the dog.
A VIDEO INSIDE JOHNNY AND VIVIANS PLACE:
Join 15,017 Monthly Readers! If you enjoyed this article and LOVE travel and SAVING money, get e-mail updates from Don’t Stop Living – a lifestyle of travel! (It’s Free) 😉 Jonny