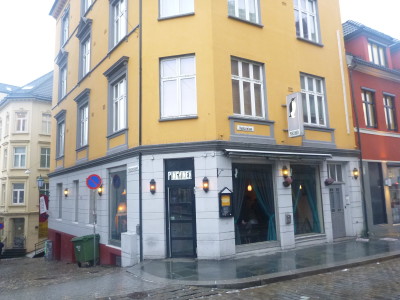 In catching back up to my huge catalogue of meals I’ve eaten yet never written about on Friday’s Featured Food, I thought I’d do a recent one – my only meal eating out in Norway. There are a few reasons why I didn’t eat out in Norway. One was that everywhere I stayed included breakfast, another was that the Clarion Collection Hotel Christiania Teater included two massive meals and another was that I still stick to my budget and light diet. However when I was backpacking in Bergen, I heard about this awesome bar/restaurant to try local Norwegian food and a place that is popular with locals and tourists alike. It’s called Pingvinen and is situated in the city centre of Bergen on a corner at Vaskerelven street. 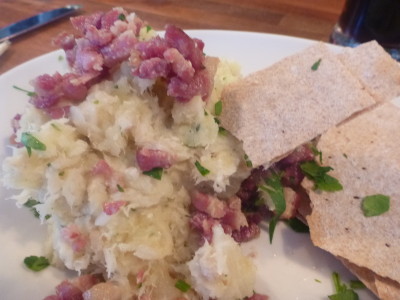 Once inside I chose to sit at the bar and I studied the menus which were on a blackboard. There is no menu in English or a paper menu – pick what you see. I know Norway is famous for fish so I chose the Fish Stew, known as Plukfisk with bacon and buttered flatbread. The price is 159 Norwegian Kroners, which is about £13. You might have heard that Norway is a dear country, so expect to pay over £10 in most decent places for a meal. 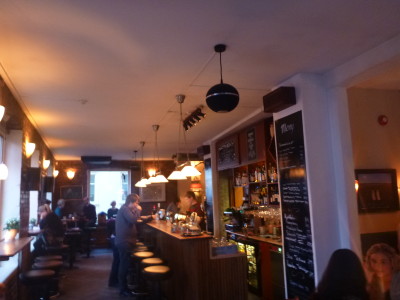 I decided to try two beers and went for one dear and one cheap beer. For the dear one I went high and chose the locally brewed Norwegian Waldemara Porter which at 98 Norwegian Kroners (just over £8) is the dearest beer I’ve ever bought. I was served by local lady Thea who was very pleasant and talkative. 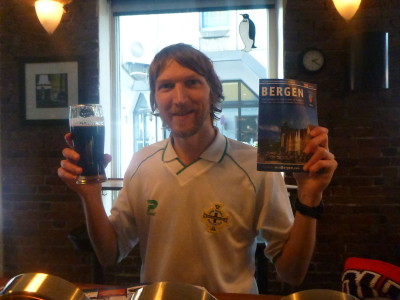 £8 a beer in Bergen in Pingvinen (but I picked the dearest one!)

Still, I thought that was OK as a lot of wannabe travellers that have never been to Norway hit you with scare stories of £19 a pint, £35 a pizza bullshit. None of that is true. It was actually a struggle to find a beer priced over £8 and indeed this was the most expensive beer I found or drank in Norway. My hostel was selling cans of lager for 25 Norwegian Kroner (about £2). So yes, it’s dearer than most countries but don’t believe the £12 a pint etc. bullshitters – it’s bollocks. 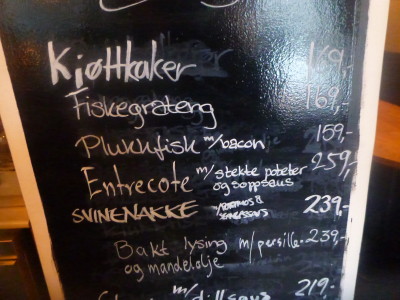 Then the fish stew comes and it’s delicious, well for the price it should be! It is mixed with potatoes and a sauce. It is mostly boneless and also comes with bacon and buttered flatbread. A decent meal. 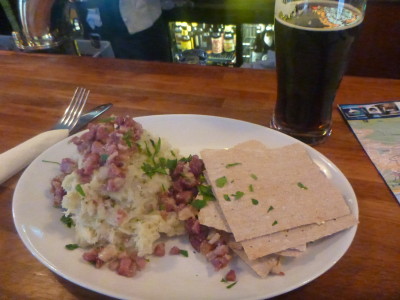 I decided on another beer and this time I chose Hansa the cheaper Norwegian lager which is around £5.80 and comes in at 66 Norwegian Kroners. 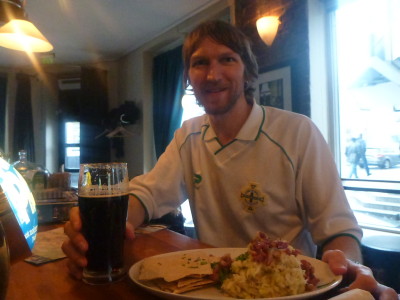 Enjoying my dear meal in Norway 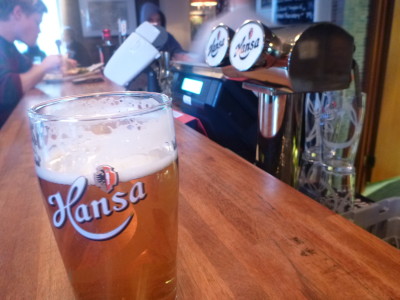 Despite the hefty price, I enjoyed my experience in Pingvinen and am glad I broke my backpacking budget for once just to try eating out in Norway. Bergen is a great city and I stayed at the Hostel Montana – I hope to write about the sights of the city too. 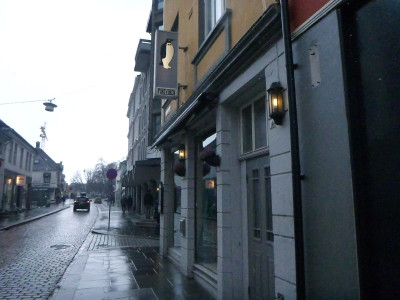 Here is a video I made in Pingvinen: