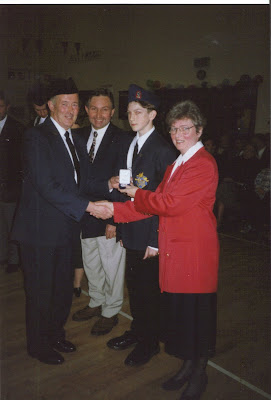 Northern Ireland Days: Getting My President’s Badge (May 1996)

Growing up in Northern Ireland meant going to church, the local Ballycrochan Presbyterian Church in Bangor (perhaps ironic now as I usually attend Catholic churches in Poland – Presbyterian is a branch of Protestantism – all Christian none-the-less). I was a member of 10th Bangor Boys Brigade (BB) from 1990 – 1999 (before this I had been in “The Bears” at Ballyholme Presbyterian Church). My main motivations for joining were my parents, but also my love of football. I got to play football every week for the BB. The BB was the main part of my social life away from school and living with parents. I had already had a few awards at BB through the years, these were gold and silver badges (during Junior Section as a 10 – 11 year old), my target boys awards (Target 1 and Target 2) and then I began to work on various achievements towards the President’s Badge. The Queen’s Badge is the highest BB accolade as a boy, the President’s Badge is second to that. To get the President’s Badge you need to do quite a lot, and it is centred around five main components, all of which are badges you need to get for your left armband. It starts off as just a naked black armband when you are a “private.” Then if you get two credits in the same field you get a badge. Then you have to get all five badges, and a further four credits in each to get two surrounds for each badge. The components are: Adventure, Leadership, Community, Interests, Physical. So basically to get them all with surrounds, you need 6 credits in each x 5, which is 30 credits. During this time, you will also get stripes on your black armband, first one as a “lance corporal”, then another one as a “corporal.” You become a “corporal” when you get all 30 credits, and your President’s Badge is gained. Here’s how I recall getting my credits for each section:
Adventure – Ganaway Weekend Camps, Treks, Treasure Hunts, Day Trips.
Leadership – I was a squad leader the whole way through, I also did Drill, marching with the colours and hosted my own “class” for the junior members on Friday evenings (normally in football or computing), captaining the football team on ONE occassion only.
Community – Helping the elderly, community service, helping do logs for Christmas, Church attendance, charity collections, jumble sales.
Interests – Collecting football programmes, chess, computing, heritage and history.
Physical – Football, weights, cross country, athletics. 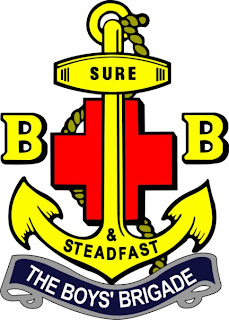 Will your anchor hold in the storms of life?

By 1996 I had represented my BB in so many different things from drill to football to chess to local President’s badge meetings to Bible Class. I was the leader of Squad 2 (my squad) and had become a “lance corporal.” Come the end of year display in 1996, I had gained my President’s Badge (a photo which thankfully appears here) and had been promoted to a “Corporal” (I would later become a “Staff Sergeant” as well). Despite what you might think, it didn’t mean I got to go to Buckingham Palace and meet anyone in the Royal Family, nor indeed did President of the USA Bill Clinton pop down to Bangor to present me with it. However at the BB end of year display in May 1996, my parents came up onto the assembly hall floor and I was presented with a rather nice red, blue and silver badge by the Captain of one of the Belfast Battallion BBs. I had already represented my BB all over Northern Ireland, and even in the Irish Republic (a chess competition) and it was a proud moment looking back. That was a particular high for 10th Bangor Boys Brigade, which is possibly the most successful BB in Northern Irish history, as lots of my year got their President’s Badge that night, and it made the local paper. I’m proud to be the owner of a BB President’s Badge, I never got my Queen’s Badge though…

What is it? – Boys Brigade Presidents Badge
When did I get it? – May 1996
Who else got one that night? – Keith Freel, Michael McClelland, Steven Wilson, Colin Walker, Aaron McQuade, Peter Bell (hope I’ve not left anyone out?!)
Any information on what it is? – http://43belfast.boys-brigade.org.uk/company.php?Mode=Badges
Join 15,017 Monthly Readers! If you enjoyed this article and LOVE travel and SAVING money, get e-mail updates from Don’t Stop Living – a lifestyle of travel! (It’s Free) 😉 Jonny