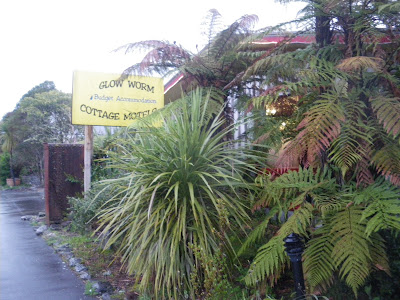 First night in the cold misty township of Franz Josef and I’m staying in Glow Worm Cottages. Quite mystical and spooky, and in total isolation seemingly from the parties of New York, the business meetings of London and the flair of Milan. Franz Josef Township is an extraordinary little place. 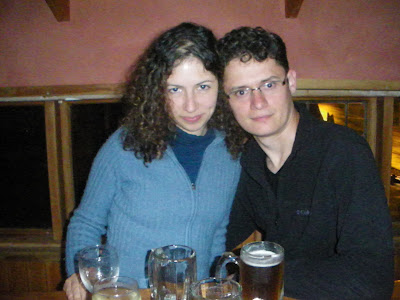 Over dinner I met an Israeli couple, who I enjoyed soup with. I suggested that since we were staying in Glow Worm Cottages, we really should go on the Glow Worm Trek, which was listed on my map, and fairly close by. I’m not sure I would have gone on my own actually, but it was great to have the three of us agree to go in search of Glow Worms. 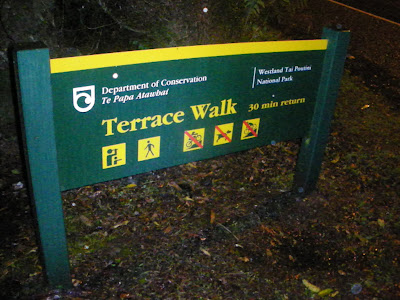 You can pay to see them in Waitomo Caves in the North Island and also at Jenolan Caves in The Blue Mountains (Australia), but here the Glow Worm experience would be self guided and best of all…free. I spoke to the lady from Sheffield on reception and she told me that to see the glow worms you need to jump over a fence, past a sign that says “Dangerous – do not enter”, and you then need to navigate past a steep and dangerous cliff edge. It was to be some experience then! 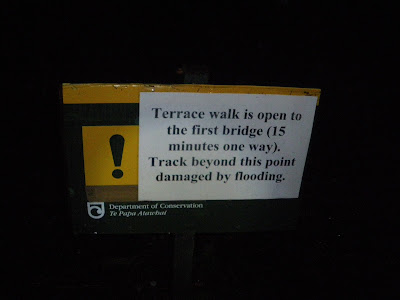 The three of us headed out towards the edge of the town to where the Church is. This is where there is the start of a trail/trek known as The Terrace Walk. It was dark, very wet, damp, misty, ill-favoured weather conditions and hardly the warmest of nights on the exposed west coast of New Zealand. It was at the entrance that we met Kylie and Nick asking if we knew where the glow worms were. I was the guide and held the map. I also had my torch – a really excellent gadget and essential for a traveller. I haven’t changed the batteries in my torch since buying it in Tasmania some 9 months ago… 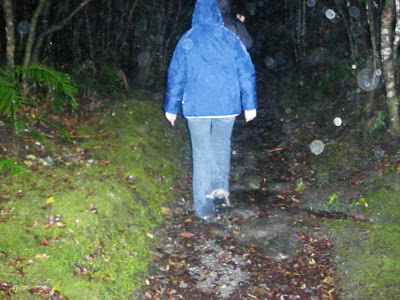 So now there were five on the glow worm trek. We were all in raincoats but not umbrellas. We were getting soaked, but I was enjoying the nature, the discovery and the trek was a nice comfortable one, if a bit slippy and wet at times. 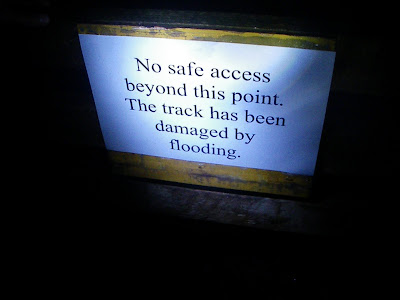 Fifteen minutes into the walk and right enough there was a sign saying the path was closed due to excessive flooding! Never stopped a nosey Ulsterman, 2 Israeli wanderers and 2 curious Kiwis. So on we went, ignoring the signs, climbing over the gate and having to navigate our way through a forest which had seen better days. 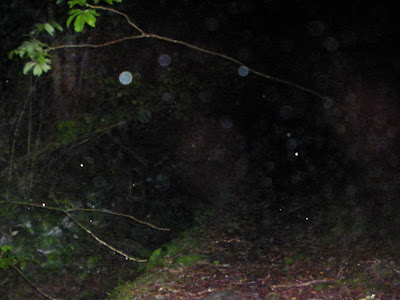 Excessive winds had caused many of the trees to fall down, and within 7 minutes we got to the dangerous cliff edge. I went first and navigated round it, noting the steep drop to one side, the view of a low lying river and the potential glacier in behind – the venue of tomorrow’s big adventure – Franz Josef Glacier itself. Another 7 minutes or so and suddenly we could see that greeny yellow glow of the glow worms… 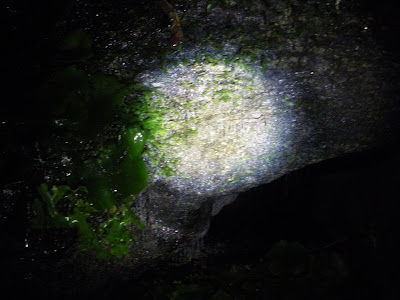 If you’ve seen glow worms before in abundance in a small area, you’ll understand the true beauty of it. They light up the forest, like a long line of Christmas Trees lights, yet these one use no electricity. It was magical. Of course the camera doesn’t pick up the glow worms – but there’s an actual glow worm I photographed using my flash, thus defeating the purpose of the glow worms very benefit. 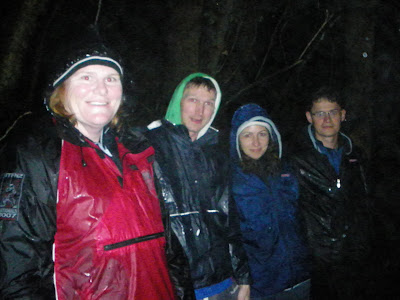 Walking back from the trek we met a group of non-English speaking Chinese people all stood freezing wearing raincoats, umbrellas and hoods. They seemed to look at us as if we were mad. Nick wished them good luck and told them there was a fence to climb over. 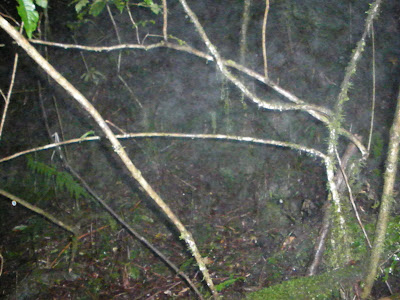 Though deep down, we all knew there was no way this group of middle aged Asians would have climbed over the fence or navigated the dangerous cliff in order to satisfy their evening’s entertainment. They walked on towards the glow worms, while we headed to the bar. 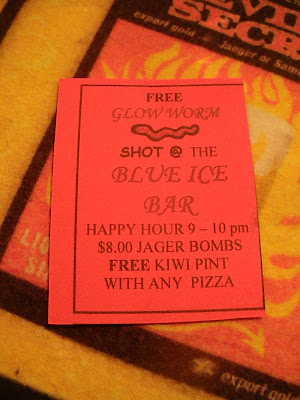 I am always one for bargains, and not only that but I look out for coupons on ANYTHING. I read leaflets and earlier that day I had picked up 2 coupons for FREE “Glow Worm Shots” in the Blue Ice Bar, which by cool coincidence was on our walk back to the cottages, so all five of us agreed we had earned our free shot, and despite only possessing the two coupons I had, we had to chance getting five free shots. 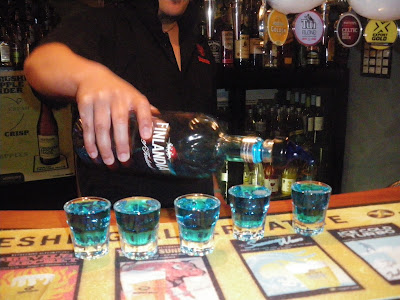 A friendly bar man in the upstairs bar was only too happy to oblige, before telling us that it was happy hour until 10 pm, we had another 20 minutes or so, and beers were just $3 a pint, and wine $5 a glass. SOLD. 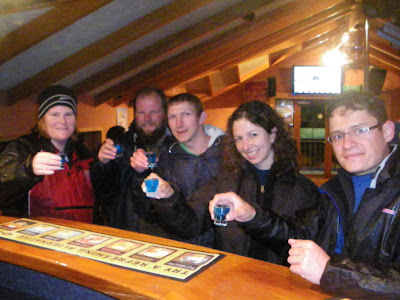 Toasting our glow worm night with our glow worm shots in the Blue Ice Bar. We had a happy hour beer as well before calling it a night in the dark dark mysterious mist of Franz Josef. 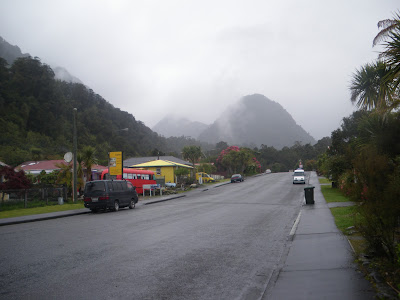 If it wasn’t such a beautiful place, it could surely have been the setting for a darkened Jonathan Creek murder mystery in days gone by. Somehow the beauty of Franz Josef would be immune to such an event.

Why does a glow worm glow? – You tell me…something to do with chemicals on their outer skin perhaps…
Essentials for the trek – a map, a torch, wet weather gear, a sensible head, decent shoes
Advice – go in a group, more fun and you won’t get lost
Number of glow worms we saw – not really sure I’d say between 50 and 100, though possibly more
Time taken – 50 minutes or so, but add a wee bit on as we lingered because we were in awe of the lighting
Bar – Blue Ice Bar, Franz Josef
Free shot in Blue Ice Bar – a “Glow Worm” which is blue curacao and vodka
[Improve]

The lamps of insects that produce light usually have a function in the insects’ reproduction. Adults have an average life expectancy of only a month and, during that short time, they need to attract a mate and reproduce to form the next generation. The adult form eats only small amounts during its life, using the energy it has accumulated during its larval stage. It spends all of its time trying to attract a mate by flashing with its abdomen. Different species flash at different time intervals, so that each one can recognise the opposite sex of the correct species. One Thai species of gloworm uses the property of being able to synchronise the flashing of its light as a sign that it is a fit mate. Colonies of male glow worms collect together and start flashing to attract a mate. After a while the males adapt the frequency of their flashing to match those around it, and all of the colony flashes on and off at the same moment. The females chose their mates from the synchronised flashers at random but they avoid those that can’t get their rhythm right as unsuitable fathers for their offspring. Glow worms (usually the larval stage but sometimes the adult females) glow (usually in the lower abdomen) throughbioluminescence (a chemical reaction during which chemical energy is converted to light energy). The chemical reaction is very efficient with almost 100% of the energy turned into light (the best light-emitting diodes can only manage 22%).


ON THE GLOW WORM TREK: