“I want to dance with somebody” – Whitney Houston.

On my other project and the blog about my life in Poland, I am proud to announce that my latest book, I Went To Gdańsk With Somebody is in its final edits and should be released at some point in early 2022. Following my “Backpacking Centurion” series, this is the story of how I ended up in Poland. This is all brand new. My “Backpacking Centurion” series covers my life and journeys from 1980 – 2015. It covers my story from growing up in Northern Ireland to living in places like Bournemouth, Hong Kong and Parramatta. That book series ends in March 2015. It was on the 27th March 2015 that I landed in Tunisia, to celebrate my 100th country. At that point, the “Backpacking Centurion” dream and series ended. I had done it. But writing never stops with me. Nor did the journey. By the end of 2015, just months after reaching my 100th country, I had been to a further 10+ new countries and was documenting my journey. When my long term relationship ended, and Hong Kong was no longer my base (2015), life changed. I was homeless, nomadic, restless and lost. This new book is all about my route to Poland. It covers my childhood days, my first trip to Poland, my Polish friends from my many jobs, my 100 country journey and then it tracks that period of my life from March 2015 up until December 2016, when I relocated to Poland.

I Went To Gdańsk With Somebody:

How A Northern Irishman Ended Up In Poland. 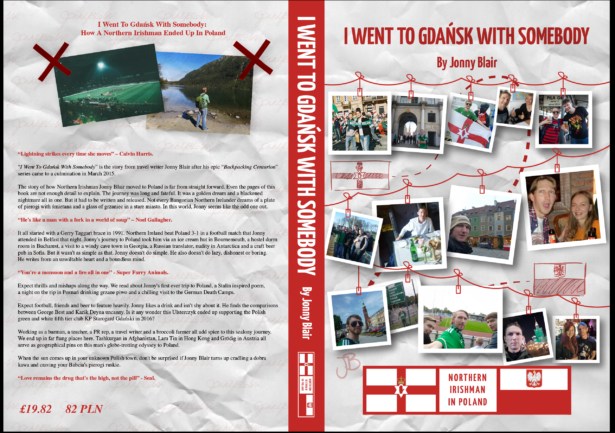 I Went To Gdańsk With Somebody: How A Northern Irishman Ended Up In Poland

I Went To Gdańsk With Somebody: How A Northern Irishman Ended Up In Poland

“I Went To Gdańsk With Somebody” is the story from travel writer Jonny Blair after his epic “Backpacking Centurion” series came to a culmination in March 2015.

The story of how Northern Irishman Jonny Blair ended up in Poland is far from straight forward. Even the pages of this book are not enough detail to explain. The journey was long and fateful. It was a golden dream and a blackened nightmare all in one. But it had to be written and released. Not every Bangorian Northern Irelander dreams of a plate of pierogi with śmietana and a glass of grzaniec in a stare miasto. In this world, Jonny seems like the odd one out.

“He’s like a man with a fork in a world of soup” – Noel Gallagher.

It all started with a Gerry Taggart brace in 1991. Northern Ireland beat Poland 3-1 in a football match that Jonny attended in Belfast that night. Jonny’s journey to Poland took him via an ice cream hut in Bournemouth, a hostel dorm room in Bucharest, a visit to a windy cave town in Georgia, a Russian translator, nudity in Antarctica and a craft beer pub in Sofia. But it wasn’t as simple as that. Jonny doesn’t do simple. He also doesn’t do lazy, dishonest or boring. He writes from an unwiltable heart and a boundless mind.

“You’re a monsoon and a fire all in one” – Super Furry Animals.

Expect thrills and mishaps along the way. We read about Jonny’s first ever trip to Poland, a Stalin inspired poem, a night on the rip in Poznań drinking grzane piwo and a chilling visit to the German Death Camps.

Expect football, friends and beer to feature heavily. Jonny likes a drink and isn’t shy about it. He finds the comparisons between George Best and Kazik Deyna uncanny. Is it any wonder this Ulsterczyk ended up supporting the Polish green and white fifth tier club KP Starogard Gdański in 2016?

Working as a barman, a teacher, a PR rep, a travel writer and a broccoli farmer all add spice to this szalony journey. We end up in far flung places here. Tashkurgan in Afghanistan, Lam Tin in Hong Kong and Grödig in Austria all serve as geographical pins on this man’s globetrotting odyssey to Poland.

When the sun comes up in your unknown Polish town, don’t be surprised if Jonny Blair turns up cradling a dobra kawa and craving your Babcia’s pierogi ruskie.

“Love remains the drug that’s the high, not the pill” – Seal.

Full details of I Went To Gdańsk With Somebody: How A Northern Irishman Ended Up In Poland will be revealed in the upcoming months.

In the meantime, get tore into the back catalogue – my Backpacking Centurion series is currently available in three volumes.

Chapter Listing for I Went To Gdańsk With Somebody: How A Northern Irishman Ended Up In Poland