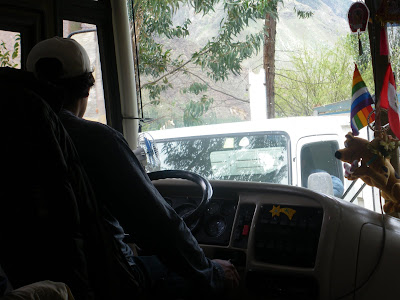 After leaving Ollantaytambo, the bus veered us down mud and rock roads not wide enough for 2 vehicles, but just about ok for the bus. Here the driver had to squeeze through the gap as did the oncoming van. Nice Cuzco and Peru flags at the front of the bus there by the way. 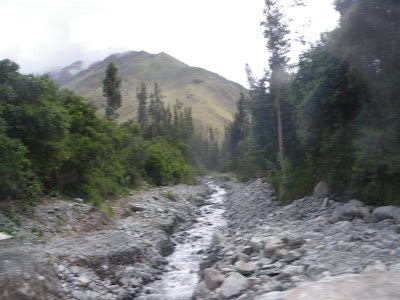 This was a very pleasant bus journey, through immense mountainside, and by many rivers. It was just a taste of the real beauty that lay ahead in this zone of the Incas. Along with Sark, and possible Tasmania, this is one place that I have been which I could easily class as a separate country. There is no resemblence here to Peru. 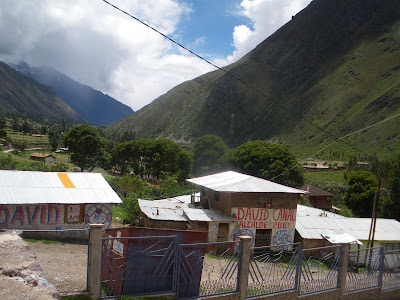 The landscape, the language, the flambouyant colour of the rest of Peru is not here. They speak Kechuan, not Spanish, they are at one with nature, there are no modern buildings and there is a more natural colour element to the attire of the locals. No mix of purple, orange and green all on the one pair of pants. The Sacred Valley is out there on it’s own. If it’s a country, this was the trek all the way to it’s astounding capital city, Machu Picchu. 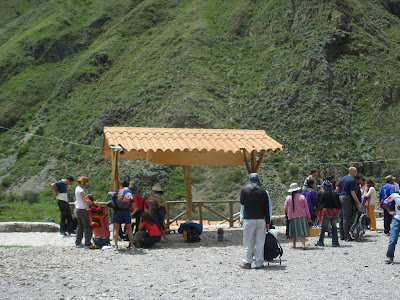 So we arrived at Q’Orihuayrachina, where the trek would begin. There are remains of an old Inca Village there, discovered as recently as 2001. This is therefore a revised version of the Inca Trail. It was at Q’Orihuayrachina where we were introduced to our leaders, given our tickets, given a briefing, put into our groups, ask any pre-trail questions and off we went. 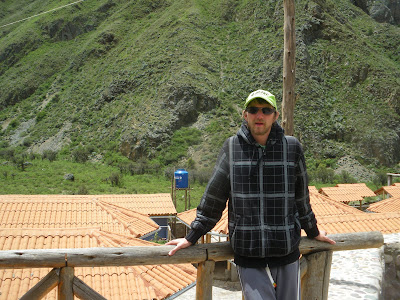 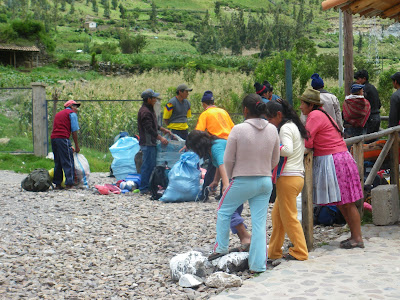 The porters carried all the tents and supplies for the entire 4 days, which would obviously get lighter towards the end. 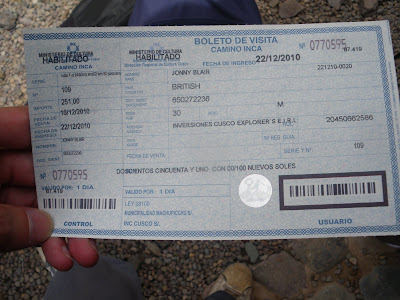 Like a ticket from Roald Dahl’s Charlie and the Chocolate Factory, rare, special. A treasured memory. Gateway to Picchu… 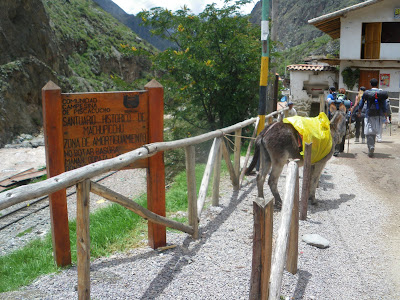 The very start of the 4 day hike. 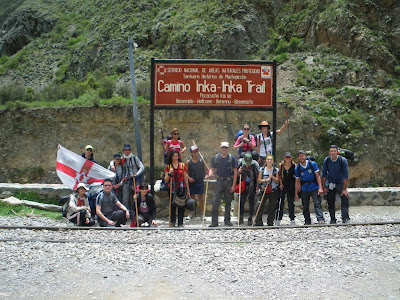 Group photo by the railway line at Q’ Orihuayrachina, where the Inca Trail began. Over the next 4 days, these 17 people would be our group. Nationalities were wide and varied, spanning 5 continents (only Africa and Antarctica unrepresented), if you look closely you’ll spot the Northern Irish man there. 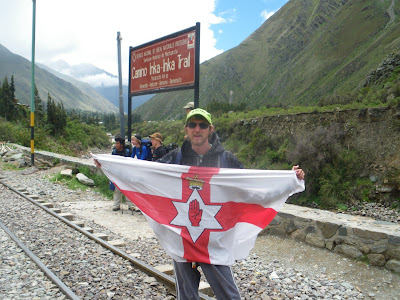 Hardly the first Northern Irish person to be here, but still, flying the flag at the start of the Trail. 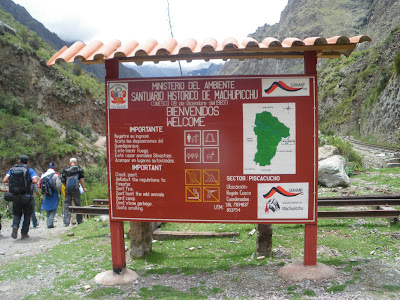 Welcome sign and some guidelines for the 4 day hike. 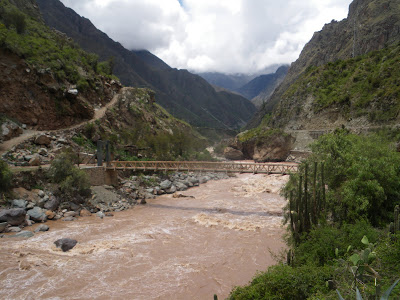 The gushing rivers through The Sacred Valley, this bridge marked the starting point past the passport check. Passports and Inca Trail tickets are essential to get to this point. It’s limited to 400 walkers per day. 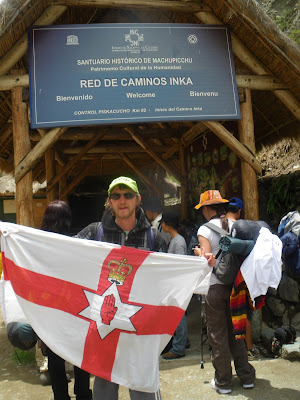 Queue for passport control – another reason why it felt like entering another country – the queue, the restrictions, the passport check, the bridge “border” (almost), the fee (like a Visa almost) and of course the passport stamp. 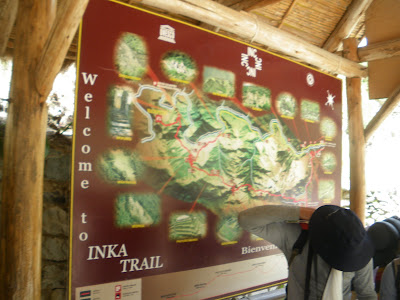 A map with most of the Inca Ruins along the trail. I noticed at this point that there is a variation of usage of the spelling of Inca Trail to Inka Trail sometimes. For the basis of my blog and writings, I will continue and always will use the spelling of Inca Trail, using the English “c” letter, for no reason other than this was the first way I knew how to spell it. 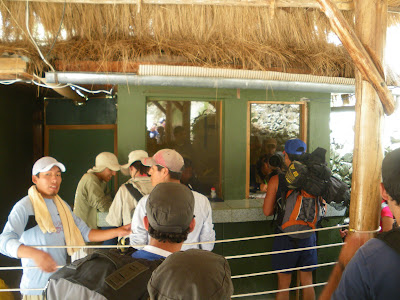 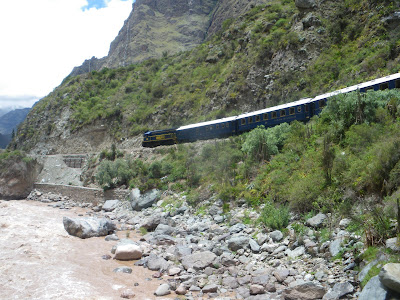 The cheater’s way to Picchu would be to get the Hiram Bingham express train through The Sacred Valley from Ollantaytambo to Aguas Calientes, and then a bus up the hills to Picchu. At no point during the hike did I wish I took the easy option, and besides the train cost almost as much, and my package included 2 buses and a train all the way back to Cuzco after the hike (later found out that many of the others didn’t have this included, and they also made a mistake on my return date to Cuzco – possibly my own fault – but all ran smooth later on!). It was fun to stare up at the cheater’s though as we hike our way through hills, valleys and across unknown ancient Inca settlements, in fact those on the train didn’t really get a feel of Inca culture at all in my eyes. 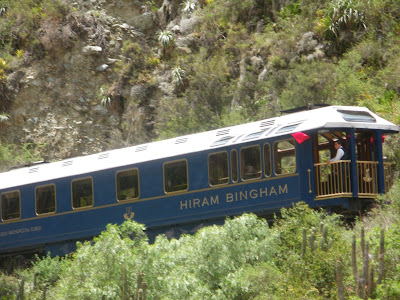 And you know what, just seeing the word “Bingham” in this sublime location made me think of more glory days in times gone by for my wee country on the world stage. The masterful Northern Ireland football manager Billy Bingham somehow steered our team to punch above our weight for almost 10 years, culminating in winning 2 British Championships and qualifying for 2 World Cups. The extraordinary behind that feat is still hard to grasp. A country of 1.6 million people, we are still the smallest nation ever to reach the quarter finals of a World Cup. I spared a moment for the God like Billy Bingham as this train sailed gallantly by into the Peruvian countryside. 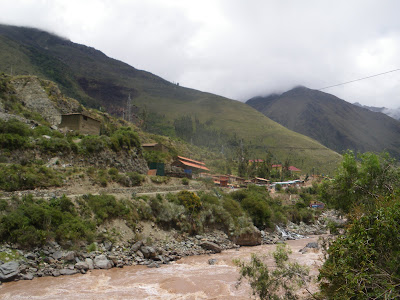 Looking back to where the trek started. 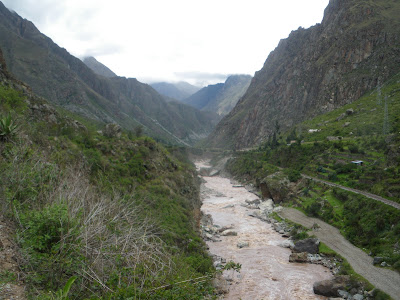 And onwards down the ravines by the river, Rio Cusichaca, which would flow with us for a while on Day 1. 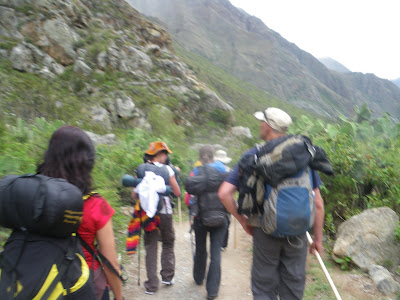 And so the real Inca Trail began…
From – Ollantaytambo
To – Q’orihuayrachina (start of hike)
By – Bus
Nationalities Met – Dutch, Peruvian, Czech, Australian, Taiwanese, Brazilian, Canadian, Spanish, Argentinian, Vietnamese, Phillipenes.
Proud Moment – Seeing the Bingham Train, flying my Northern Ireland flag
By the way – Hiram Bingham is the US explorer who discovered Machu Picchu, only 100 years ago, in 1911. Bit of a story behind that which you learn on the way…
Key Song –

THE TIGHT ROCKY ROAD ON THE BUS FROM OLLANTAYTAMBO TO Q’ORIHUAYRACHINA:
Q’ORIHUAYRACHINA:
Join 15,017 Monthly Readers! If you enjoyed this article and LOVE travel and SAVING money, get e-mail updates from Don’t Stop Living – a lifestyle of travel! (It’s Free) 😉 Jonny