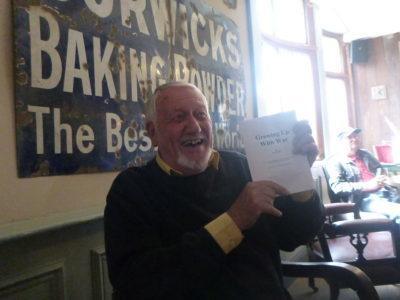 If nothing on this site ever inspires you, perhaps this one can. It was a joy, privilege, and honour to meet up with, interview and sink beer with Ron Hands. Ron is an 83 year old blogger and can tell a story or too. Ron is based in Southbourne, Bournemouth, Dorset, England. First up you might want to check out Ron’s website and blog: 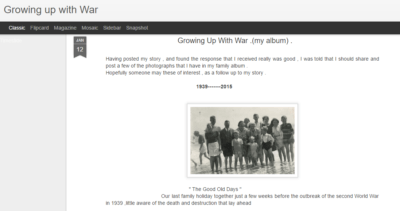 My barmy lifestyle led me by chance to this meeting with Ron. Everyday is an adventure since I started whackpacking, and sometimes we do crazy things and we don’t look back into that there sunset. Because we don’t have time to waste. Sat in a flat in Hong Kong in 2015 with the option of becoming the owner and editor of a local website in Bournemouth, I jumped at the chance and took it. I was taking on extra work and it turned out I didn’t really have time for this new project yet it got me back in touch with people from Bournemouth, and from Southbourne, as the site I’ve been managing is Southbourne.net. 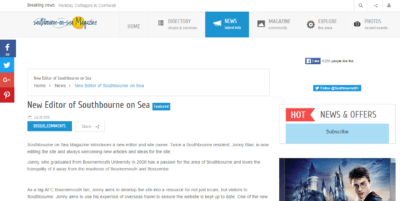 My new project is editing a Southbourne Magazine

I meet interesting characters all the time. There was that time in Israel where I met the hero of the country, then I met Jonny Evans and Michael O’Neill in Turkey and earlier this year I met Nate Jacobs, a wild traveller and teacher from the USA who has backpacked through Abkhazia, Afghanistan and North Korea. 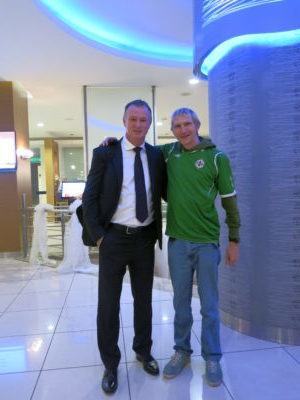 These people have inspired my journey somewhat. People from Bournemouth email all the time now because of the site and my history with the town. And so, an email came in from Ron Hands, a local legend and writer from Southbourne and so, Ron and I met up over a few beers in one of Southbourne’s newest brewing houses, the Brewhouse and Kitchen. This was another “full circle” for me, as at one point in time this was my local pub under its old name “The Malt and Hops”, a venue I once drank in with Hungarian dancer Noemi Linzenbold, goodbye baby. The timing of the meeting with Ron, worked out well. After visiting the Kingdom of Lovely in London, doing some running and meeting my brother in Liverpool, I was back in Bournemouth on route to Senegal. 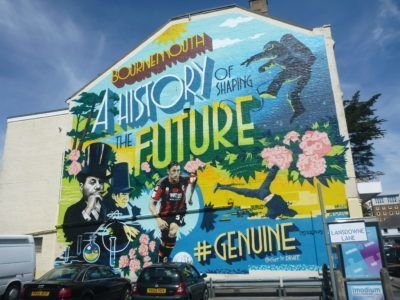 I interviewed Ron and loved what he had to say. He has written a book called “Growing up with War” based on his experiences of living  in England during the Second World War. Having just whackpacked my way through Munich and Auschwitz, lots of relevant parts of his story were fresh in my mind. Here is a quick video and then some of the things I asked Ron:

I wanted to get a feel for Ron’s entire lifestyle, away from the war bunkers, away from his writing so I asked him just questions about life, Bournemouth and modern “either-or” questions, to which Ron seemed genuinely keen yet curious about. In fact in the end, it was just a few lads down the pub having a chat! 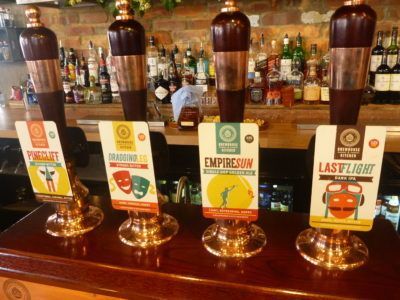 Beers on tap in the Brewhouse

Football – AFC Bournemouth
I learn that Ron is an AFC Bournemouth fan and he speaks of his first memory at Dean Court when he was at the Brighton beach end on the first night the stadium had floodlights. Through the years Ron has met Ted McDougal, Eddie Howe and the afmous Trevor Watkins, who saved AFC Bournemouth from extinction in 1997. 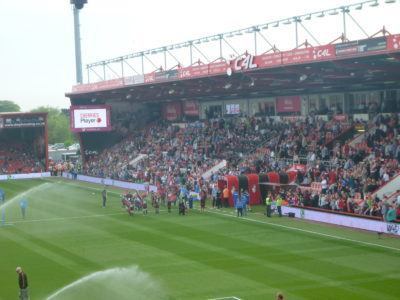 Early Years – Pre War
Ron Hands was born in the Queen Victoria Hospital on York Road, Waterloo, London. He’s a lovable man, evident from the fact that he was born on Valentines Day, the 14th February 1932. Ron was 7 when the Second World War broke out. Ron’s grandmother went to school with Charlie Chaplin and they once did cartwheels together. 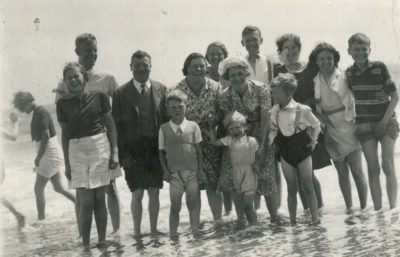 Ron’s Book – Growing up with War
Ron delightfully gives me a copy of his book, both in digital and in print. It’s a memoir of a young boy who grew up with the war all around him. What makes it remarkable for me is that many many people in England are still alive that were born pre-World War Two. But sadly, as Ron says “very few of them wrote about it”. What this means is the future generations don’t have as much to go on as they could. The entire interview feels like a blast to the past. 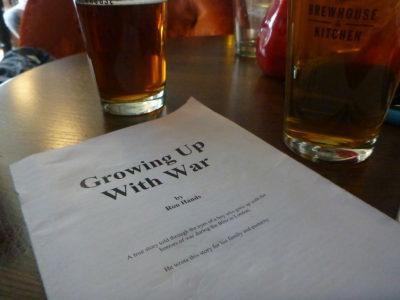 Ron’s book – Growing up With War

During the War – Stories
You can read Ron’s stories in his book and blog, but he told me a few good ones. Some off the record and some on here. When Neville Chamberlain made the announcement that Britain was going to war, he was around family. His father was some character. Ron tells of the Canadian Army coming over, and in custom built villages, there was often a “friend or foe” issue when you saw someone you didn’t know. Of course the Canadians were friends. One day, when hearing a shot, a genuinely scared Ron, ran for cover. Someone came in and asked him if he wanted some beef steak. The shot was of a soldier killing a cow. The Nazis hadn’t arrived. 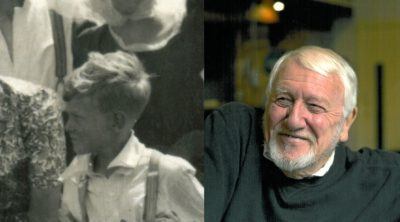 Ron recalls being buried underground with his family in an Anderson’s Air Raid shelter, rations and all. His Aunt and cousin survived a bombing in South London at Balham. 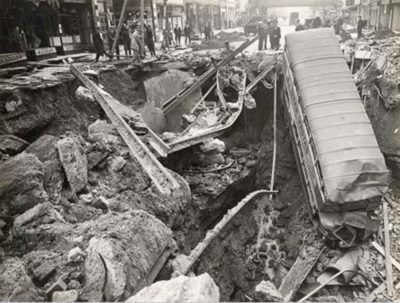 A crater in Balham, where Ron’s Aunt and cousin almost died

Post-War – Marriage and Work
Once the Brits and their allies had got rid of the Nazi threat, 1945, it was time to get back to a normal life. Ron joined the Post Office in the 1950s, got married  to his wife Mary and moved to Bournemouth, where he has lived ever since. 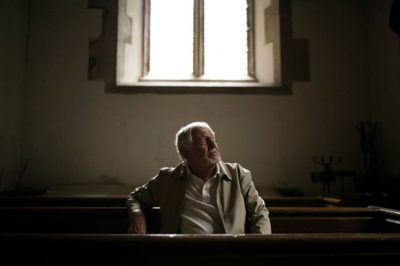 Ron ponders, 75 years on from a village church in Sussex

The Venue – My Beer
My friend Austin Sheppard joined me on the interview day and he delivers me a beer. The beer, Austin says by coincidence has Ron’s name in it – I drink a SynchRONicity Ale. 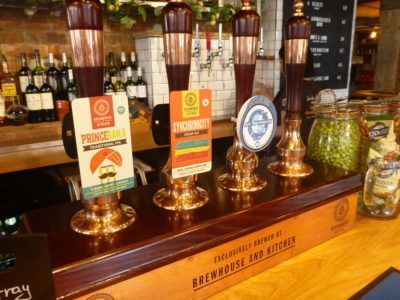 Family – Grandchildren
Ron is blessed with a large family, and both his daughters live nearby in Bournemouth, so unlike me as a globetrotter, Ron sees his family often. Amanda was born in 1960, Lindsay was born in 1962. Ron has 7 grandchildren. His wife Mary sadly died in 1989.

Ron the Celebrity
Having worked in the Royal Bath Hotel and in places of such prestige after leaving the Post Office, Ron has mingled with the rich and famous, nonchalantly so. Ron tells me he once met the Pope. “Which one?” I asked, “all of them!”, he replies. Other celebrities of note that Ron has mingled with include Pele, Maggie Thatcher and Billy Pearce. 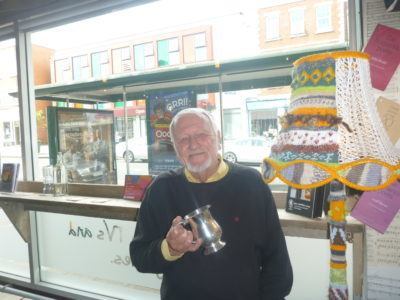 Ron Hands in his local pub, the White Bear 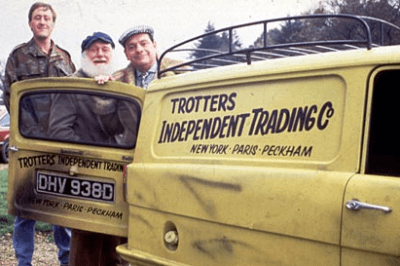 Why do only fools and horses work? Ah na na na na

Ron is an ambassador for the UK’s leading bus and coach company, National Express and his local pub is the White Bear in Southbourne. After a few jars in the Brewhouse, we head to the Grove Tavern and into Ron’s local pub the White Bear for a few jars of real ale. Ron has been a total sport and a barrel of laughs! 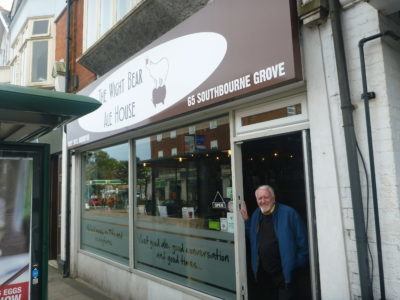 Ron outside the White Bear in Southbourne

Ron’s final piece of advice and the best inspiration he gave me was :

I simply loved that!

The interview with Ron Hands took place in the Brewhouse Kitchen in Southbourne, Bournemouth, Dorset, England on 6th May 2016. Photos appear courtesy of and with thanks to Ron Hands. 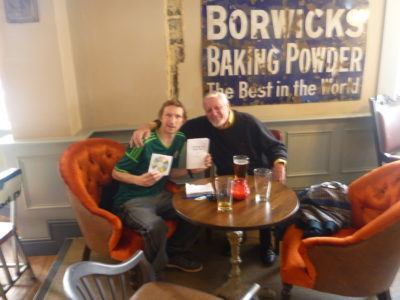 Ron and I in the Brewhouse, Southbourne, England