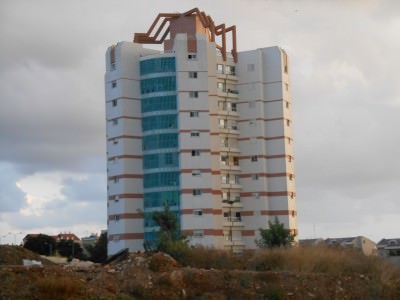 Tower block housing in Haifa near where the hero of Israel lives and protests daily.

It’s not everyday you meet a hero. While nonchalantly backpacking on the west coast of the country, I met the “Hero of Israel” in Haifa, or at least the brother and media guy for the hero of Israel. It was all a bit confusing and odd, and in Hebrew. But I got a kind of interview with him as an exclusive. Via my friends, I got to interview the enigma of a man who is the self proclaimed “hero of Israel”. A very insightful and interesting day on my travels and I’m glad to share this little experience with you on Don’t Stop Living finally. 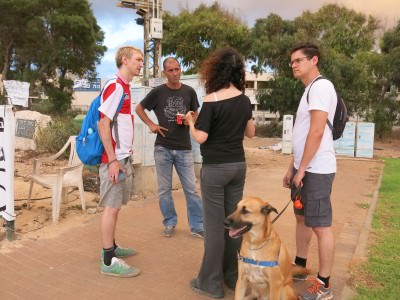 Interviewing the hero of Israel in Haifa!

Most backpackers in Haifa head to the beach, to the Stella Maris Monastery and to the Baha’ai Shrine. Yes we did that as well, but I got away from the usual backpacking trail by staying with my cool friends, Alex and Natali in a local area. Not a more welcoming couple could you meet. 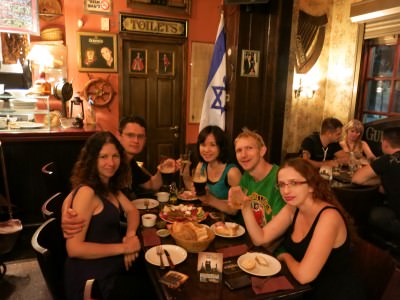 Drinking in Haifa with Alex and Natali.

I first met Alex and Natali while backpacking in the South Island of New Zealand in 2010 when we did the Franz Josef Glacier Hike together. Three years later and it was time for that reunion as we did a cave tour in northern Israel, an oil lamp tour of Caesarea, met the Druze religion in Isfiya and tried the best humus in Israel in Akko. Some totally amazing trips. On our last night in Haifa, after a WELL needed afternoon sleep in their flat, we decided to head to the beach and walk Paul, their dog. 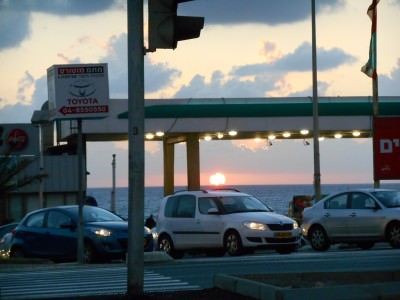 Sunsets in Haifa and I head to meet a hero. 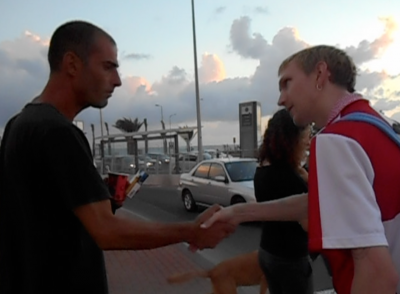 Shaking hands and interviewing Shomi, the Hero of Israel, in Haifa

You can watch the quick video clip (think it’s 8 minutes long) at the bottom of this post (it’s all in Hebrew). The thing is though, this was a bit of a scoop, as this dude refuses to talk to ordinary people and will only tell his story to the media that he trusts and believes will not exploit it or mis-tell it. He wants an outlet for his story, which is why I share what I know on here today. As we met up with him, I told him I am a travel writer backpacking through the Middle East and keen to hear his story. So he agreed to open up. 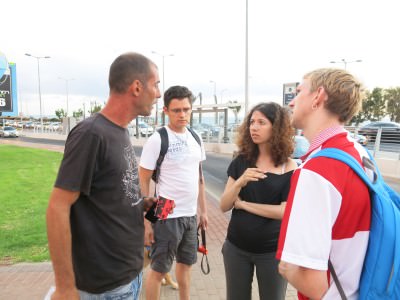 Chatting with Shomi, the hero of Israel in Haifa

We speak in Hebrew, through my friends Natali and Alex they translate for me into English and here’s roughly what I found out, I have put this in point form as it seemed the best way to sum it up, and I also must apologise for any inaccuracies in the story due to language barriers etc., I’ve done the best I could to tell the story: 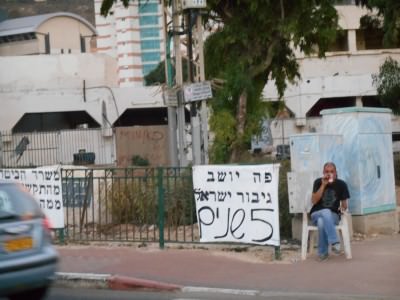 Shomi sits by his protest banners in Haifa

– It took the Israeli Police a year to actually act upon what the Hero of Israel was telling them.
– He tells about a soldier who tried to commit suicide a hat-trick of times.
– His parents treated this soldier after the incident because he had a post-trauma experience.
– The soldier is his brother.
– Local people don’t respect him, his brother or his family. 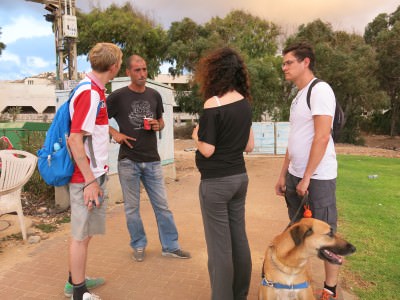 Chatting to Shomi in Haifa, Israel 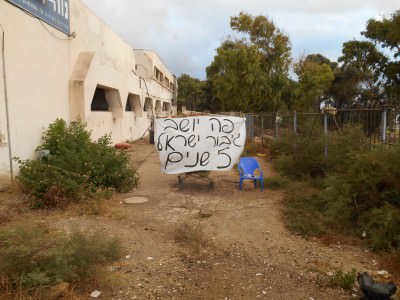 One of many slogans that the hero of Israel has placed near where he lives.

– The Hero of Israel wants the media to listen but needs to trust and hope that they tell his tory in the correct way.
– The Hero of Israel is called Shomi (hope that’s the correct spelling in English) and his brother is called Shy El.
– His brother Shy El was stabbed one night in the place where they stay in Haifa.
– His brother Shy El was sleeping in this building the time of the interview with Shomi.
– At the end of the interview he asked for my business card, I gave it to him, shook his hand, thanked him for the interview and off we went to the beach. 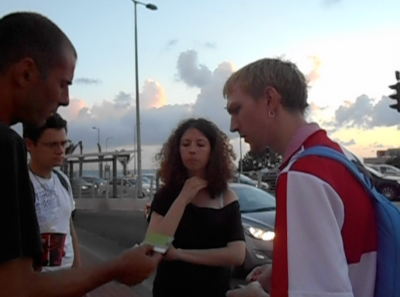 Handing my business card to Shomi, the Hero of Israel.

I told Shomi I would share his story on my site, and here it is. Apologies that it has taken 9 months or so. I felt I had to sit down, listen to the interview properly and type it up with a clear head as I have done tonight. I wanted to do the story some kind of justice. 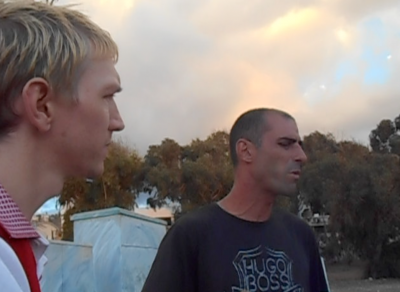 Interviewing Shomi, the Hero of Israel in Haifa.

If you’re a journalist and you want to listen to and cover Shomi’s story in the correct way, head to Haifa and track the man down – he sits near the memorial down by the beach – you’ll find him. And please tell it like it is – neither myself nor Shomi have time for liars, fake or wannabes.

Here it is – the full interview with Shomi, the Hero of Israel: