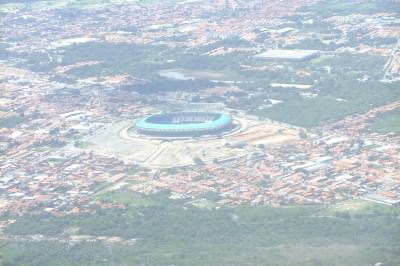 Is this the way to Fortaleza? DSL goes full circle.

I cast my mind to my trip to Suriname in 2011. On the way to meet my friends in Recife, Brazil I had a stopover in a city unknown to me at the time, Fortaleza. It was a four hour layover and I was back in Brazil after the magic of tropical Suriname. It was always a dream of mine to go to the World Cup someday. I had an option to go to Germany in 2006 as my best mate Neil headed out there with a tent and backpacked it properly on the cheap. Sadly, I had just got a new job in London for a PR firm so timings didn’t suit me and ashamedly work got in the way (crazy I know, I know but that was then and this is now). In 2010 when the World Cup was in South Africa, I was busy planning my Antarctica and South America trip. But I set my sights on the 2014 World Cup in Brazil. I hoped Northern Ireland would qualify. But realistically we don’t have a decent team anymore. It didn’t matter now. I just wanted to go to the World Cup. I was adamant I would do it. 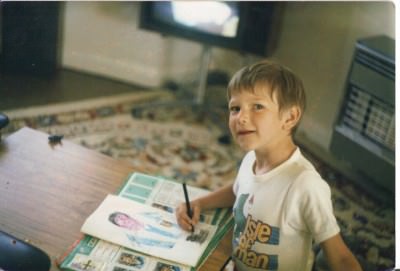 In 1986 with my Mexico 86 sticker book open at the Northern Ireland page, but I’m drawing the hero of that World Cup – Diego.

I started planning early for it, monitoring when the tickets would go on sale and applying as soon as they did. I made sure I was awake early and in a place with decent internet. It was August 2013 when they went on sale and I was back in my Hong Kong base after a trip to Africa. I applied, then that week we headed backpacking in North Korea before heading on a flight direct to Amman in Jordan to tour the Middle East for the next few months. 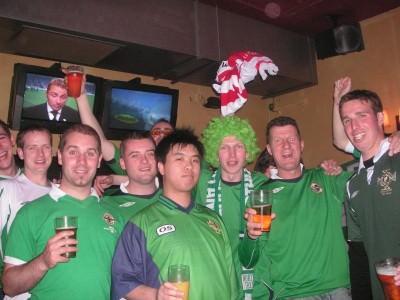 I was in the Why Not hostel in Tbilisi Georgia one night. It had been a good day. I had given up drinking that week after some carnage in Nagorno Karabakh. And there it was. In my email inbox – tickets confirmed for a World Cup match to be held in Fortaleza!!! I was so excited but it’s only sinking in now! As a big Northern Ireland fan, sadly my team won’t be there this year – we have qualified twice during my lifetime though – 1982 and 1986. I still have my Mexico 86 scarf that my Dad bought me. I wasn’t there back then – I was only 6 when we played in the 1986 World Cup. The biggest irony of all is that Northern Ireland’s last match was against Brazil. In Mexico. And I’m going to watch Brazil v. Mexico in the World Cup this year! 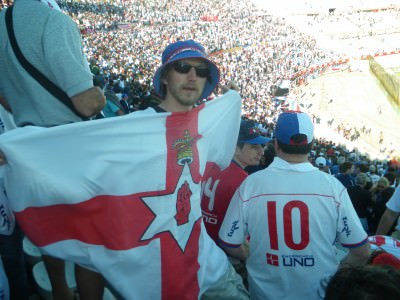 Watching Nacional in Uruguay on my travels.

I’m sure I will have more World Cup previews and posts to come, but just a quick overview on this year’s competition! The 20th FIFA World Cup is due to kick off on 12th June in Sao Paulo in when the hosts, Brazil, play Croatia, in Group A. The competition hasn’t been hosted by Brazil since 1950, so it’s the first time in the modern era and it promises to be a spectacular tournament. In 1950, Brazil lost the Final 2-1 to Uruguay, a win which has haunted them since. They have made amends though, lifting FIVE World Cups since then and have to be the bookies favourites this time round. In 2010 I visited the awesome World Cup museum in Montevideo, Uruguay – in the stadium where the first World Cup was held. In 2011 I also made it to the football museum in Sao Paulo in Brazil. 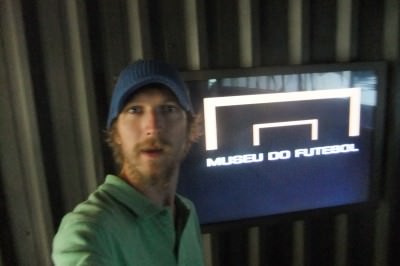 Inside the Museu Do Futebol during my second visit to Brazil in 2011.

In many ways, it’s the return of football to its “heartland”. The game may have been invented by the English, but it is most loved and revered by the Brazilians, an opinion which is hard to argue against. As Northern Ireland fans we sing “We’re Not Brazil, We’re Northern Ireland”, an ode to the team that play the people’s game the way it should be played. With passion, with style, with flambouyance, with skill. Brazil is also the only nation that has qualified for all 20 World Cup tournaments so far. Before the bookies change their odds when the squads are announced, it’s a great time to get an early bet on the World Cup and I’ll be honest I’m not sure who I’ll pick. 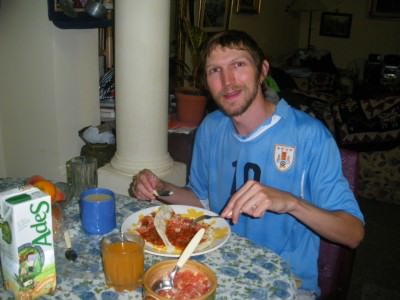 Wearing my Uruguay shirt in Montevideo in 2010, but I’m not sure who will win this year!

As already mentioned, Brazil are the favourites, followed by Argentina, Germany and Spain. But if you’re looking out for a value punt, then consider the Italian team, which during history has been the second most-successful nation, but is currently priced at around 25/1 because their squad for this year’s World Cup isn’t considered to be as strong as normal. They could be a dark horse, and despite their tough groups Cameroon and Ghana also have to be fancied. Ivory Coast should get through the group stages. My English mates will tell me England have a chance. But then so have Portugal. And Uruguay, who incidentally play Northern Ireland in a friendly just before the World Cup. 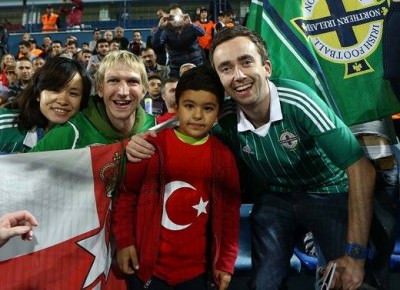 So guys and girls, the madness awaits. It’s just under 6 weeks until it all kicks off!! If you can be in Brazil during the world cup, even if you can’t actually get tickets to any of the games, the atmosphere promises to be electric, with the footballing action going on in 12 different venues around the country; from the rainforest city of Manaus through to the beach resorts like Recife and Fortaleza, to the world-famous Maracana stadium in Rio where the final will be held on July 13th. Just being in any of those cities while the games are on will be an incredible experience, with partying going on in the streets all through the competition. I’m going to do my best to catch up with a few mates out there too – both Brazilian mates and some travel buddies down the years that are heading out there – Carlo, Ray, Moby, Leif. Plus my girlfriend and 2 of my best mates Neil and Chris.

Should your team get knocked out early, then you still have the amazing experience of exploring different regions of Brazil while you are there. It’s a country with such a myriad of different landscapes that you could take months to see it all, I’ll be aiming to do some non-football backpacking as usual too, read about my Iguacu waterfalls trip here.

To be able to say I was there in Brazil for the 2014 World Cup will be one of those travel memories that I know I will never forget and I’ll be sticking a few bets on to hopefully gain a bit of extra cash for my upcoming backpacking adventures. More likely though, it’ll go to help cover the costs of this blow-out Brazilian tour. It won’t be cheap. For that you can be sure. 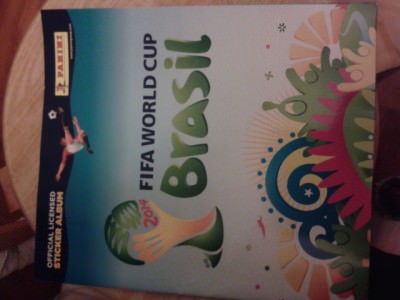 Got my Panini Sticker Album ready!

On a side note, I’m still on target for my 5 travel dreams this year and seriously aiming for my 100th country. While in Brazil, I plan to have side trips to Guyana and French Guyana, two countries in South America that I missed first time round!

Life has truly gone full circle for me this time. It was my love of football that started me travelling. It was the Mexico 86 Panini album that I read and thought I wonder what Uruguay, Iraq, South Korea and Hungary are like. I’ve now been to a load of these places and ticked off some travel dreams. The big one is to go to a World Cup match now. The fact that it’s taking me back to Fortaleza is uncannily freaky. But I’m ready for it!

See you all in Brazil. Bring it on!!

11 thoughts on “Is this the way to Fortaleza? Don’t Stop Living goes full circle again, my World Cup Travel Plans!”