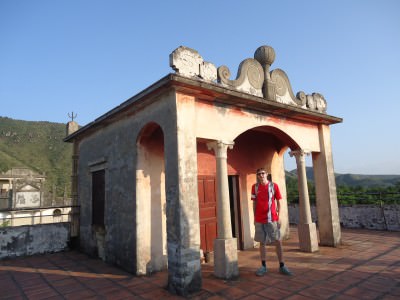 Continuing on from my first post on the historic town of Chikan on the Kaiping Diaolou Tour, we headed to MaJianglong next. This is basically a cluster village within the Kaiping Diaolou range of World Heritage Sites. The Cluster village contains scattered towers and is situated deep in the countryside. You will need a ticket and you pay to get inside its compounds, whereas entry to the town of Chikan of course is free – as it’s just a town. The entire Kaiping Diaolou range are situated near the city of Kaiping in Guangdong Province of China. 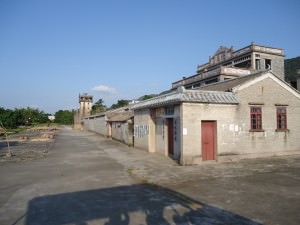 How to get to Majianglong Diaolou Cluster

As I mentioned on the previous post there are really only 3 ways to get to these places and those ways are:

If I was travelling alone I would choose option 2 there as it will work out better value and you might also meet fellow travellers to share the experience with. On this occassion myself and my girlfriend had a member of the family taking us round, so it was a case of chip in some petrol money and off we went! 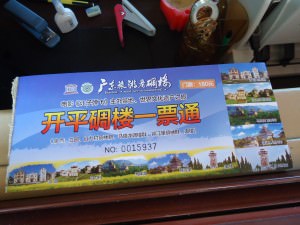 A ticket which includes entrance to the other Kaiping Diaolou Sites.

In terms of where Majianglong actually is, it is south west of the city of Kaiping firstly along the highway 325 and then on the smaller road (like an A road) which is the S275. I wouldn’t like to find it on my own. All signposting is in Chinese but without stress, fuss, hassle or getting lost we arrived at the entrance to the Majianglong Diaolou Cluster! 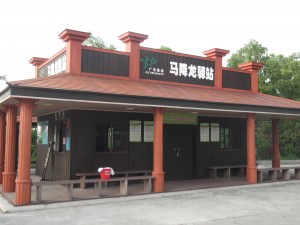 The ticket office at the entrance to Majianglong – you can get your tickets for the entire Kaiping Diaolou here.

Once you get there your entry cost includes a motorised cart which takes you through the village and stops off at different points for you to get out. 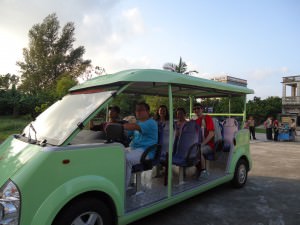 On the motorised cart getting driven around Majianglong Village in the Kaiping Diaolou of China.

Majianglong: The Most Beautiful Village in the World

Well the self entitled “most beautiful village in the world” is certainly off the beaten track. There were NO (zero) other tourists at the entrance when we pulled up into a non-descript car park! 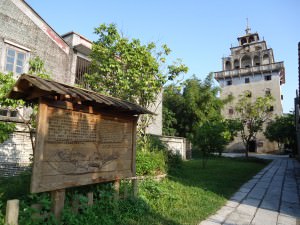 This was my first glimpse on the actuall arrival in the most beautiful village in the world! Majianglong!

A Bit of an Overview on Majianglong Diaolou Cluster

OK so you will need to understand a bit about what this place actually is rather than just visit. I had done a bit of research and picked up a leaflet from out hotel. This set of World Heritage buildings is included in the current China Lonely Planet Guide so I read up on it through that. The leaflet at the hotel was a lot more detailed, even if it included some errors lost in translation. 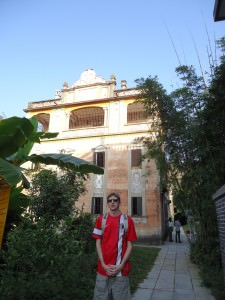 Inside Majianglong Village within the Kaiping Diaolou.

The Majianglong Diaolou Cluster is situated alon the eastern coast of the Tanjiang River and are under the jurisdiction of the Baihe Township. This is actually an area composed of five villages (yes it’s quite complicated but when is China not?) which were all established during the Qianlong period (1736 – 1795). The village of Majianglong is often pronounced “Ma Long” for short and that’s what we were calling it. The original name of the village was actually Fengsuilang which means “good harvest every year”, however since 1949 it has been known as “Majianglong” and a lot of the villagers emigrated to USA, Canada, Mexico and Australia. 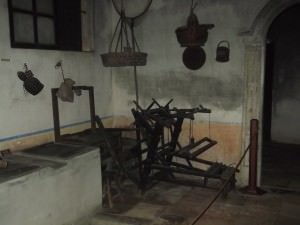 One of the kitchens in a Majianglong villa.

Majianglong has seven Diaolou (the tower blocks) and eight Villas (smaller housing with less floors) and they were all built in the start of the 20th Century. 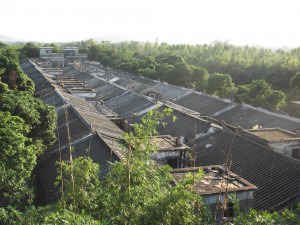 The view over the village of Majianglong from the top of one of the villas. 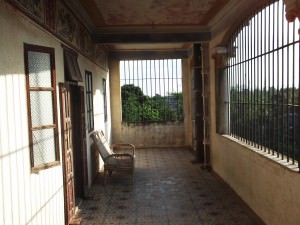 One of the balconies in the villas at Majianglong Diaolou Cluster, Kaiping, China.

How much does it cost to enter Majianglong?

OK so at the entrance you will buy a ticket which includes entry to 5 of the Kaiping Diaolou so you are better off visiting a few of them (we visited 4 of the 5 and also added Chikan and Kaiping City which are free of course). 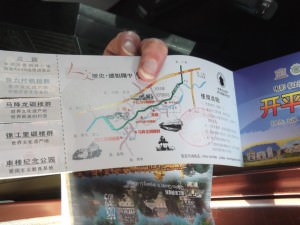 This ticket costs 180 RMB/Chinese Yuan per person. The ticket includes one visit to each of the five main sites, of which Majianglong is one. They actually have a website believe it or not, but everything is pay on arrival: Kaiping Dialou.

What is there to do at Majianglong?

You basically tour the village, entering the buildings, reading what it’s all about and admiring the architecture! You do it at your own leisure. Here are the three main buildings within the village:

An elaborate 7 storey tower this one seems to be the focus and centrepiece of the village. While there is some information in English, the translation needed a bit of tweaking: The Tianlu Lu is a classic example of a communal tower in Kaiping, the most perfect representation of this genre. 29 households donated funds to build it, in 1925. 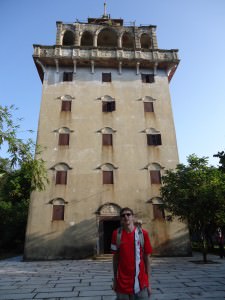 In front of the 7 story Tianlu Lu tower, the centrepiece of Majianglong.

It is built of reinforced concrete and is 7 storeys (21 metres) high. It occupies 105.5 square metres, and its built floor area is 488.12 square metres. On the lower five floors there are 29 tiny rooms, one for each household. In those days, men from all the donating households would go into the tower each night to keep a lookout for bandits. The sixth storey of the tower was left open for communal activity, and the top floor had a watch-turret. 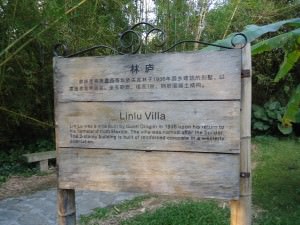 This Villa was built by Guan Dinglin in 1936 when he returned to China from Mexico. e went inside – it’s a three storey building and offers good views of the countryside. 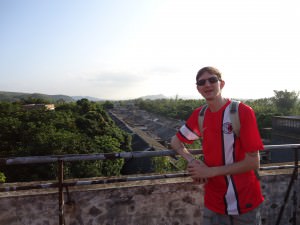 Admiring the view of remote and obscure Chinese countryside from the top of the Linlu Villa in Majianglong.

This villa was built by Guan Chongjun on his return to China from Canada. Again we went inside – it’s 4 storeys high and again offers great views. 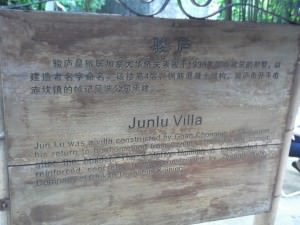 There are a load more villas that you can go inside in fact, a lot of them are now open to the public – 3 was enough for me and to be honest inside they all kind of look the same! 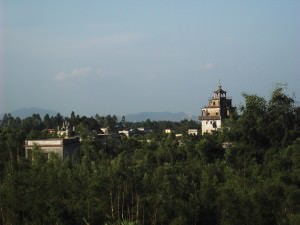 View from the top of the Junlu Villa over the village of Majianglong and the countryside.

After seeing the villages of Chikan and Majianglong within the Kaiping Diaolou in China, we returned to the city of Kaiping for food and a night out and we stayed in the Milan Hotel there. We would be up early the next morning to complete three more parts of the Kaiping Diaolou Tour. If you were really in a rush you could do 5 of them in one day I guess. But I was pretty glad we spaced it over two days with the bonus of a night partying in Kaiping!

Here are some of my videos from Majianglong Cluster Village in Guangdong: