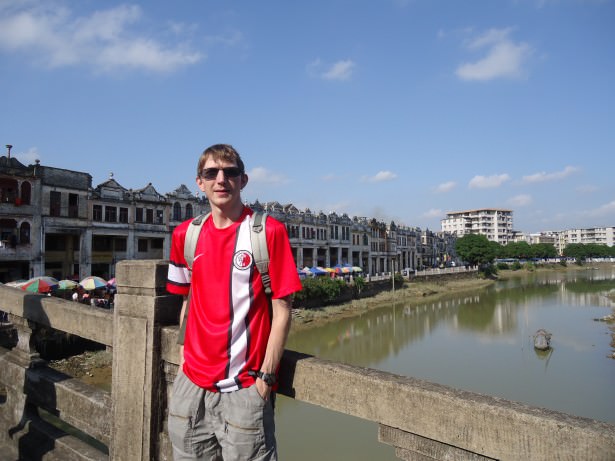 Relaxing on the Kaiping Diaolou Tour at the historic town of Chikan, GUangdong, China

My recent China adventures have been wide, varied and definitely “off the beaten track”. I feel blessed by my visits to the country which houses a sixth of the world’s people and I’m happy that I can share all these stories with you. This will be the first of an installment on the incredible Kaiping Diaolou Tour which covers historic buildings in China’s Guangdong Province. All the Kaiping Diaolou are included in UNESCO’s World Heritage Site series. It’s touristy as far as the Chinese are concerned. But when you’re a foreigner or a travelling Northern Irishman, it just seems somehow more inspiring and special. Now I report on the first part of the Kaiping Diaolou Tour – my trip to the historic town of Chikan… 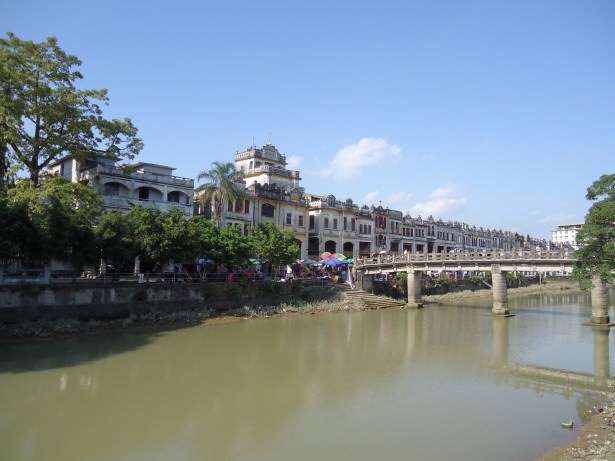 How to get to the Historic Town of Chikan

For the purposes of my entire posts on the Kaiping Diaolou Tour, I based myself in the city of Kaiping. You should do this too – we stayed in the Milan Hotel in the city centre and you can organise all your tours from there. I’m sure the other hotels will offer the same service. I was with an extended family member who was able to drive us everywhere in his private car so got a bit more of a look than you would on the guided tour. Don’t book anything in advance before you arrive in Kaiping. In terms of getting to Chikan, well it’s by a river off the main highway 325, south east of the city of Kaiping – you won’t need to know that as you will more than likely be with a tour! 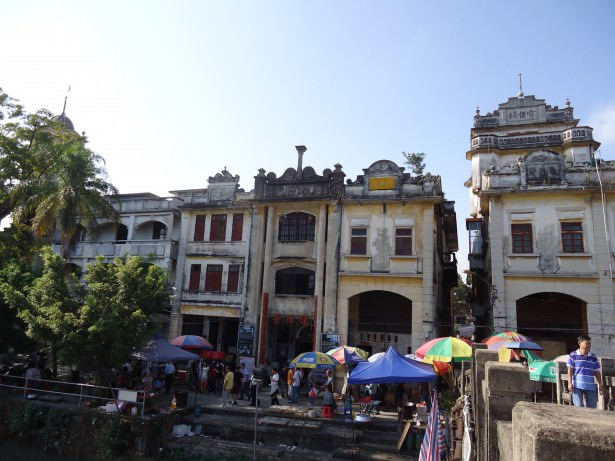 Buildings such as this one make Chikan stand out a mile – there is no commercial aspect to this old style town. Leave your iPods at the door please!

What is The Historic Town of Chikan?

You might have guessed it’s an old Chinese town and yes, that it is. The big difference between a town such as Chikan and Shaoguan (for example) is the lack of commercial advertising. Here in Chikan, you won’t be seeing a lit up Sony or Panasonic sign at night and the local shops sell fish and fruit rather than iPhones and Kindles! Leave your modernity at the door please, as you are taken back in time. 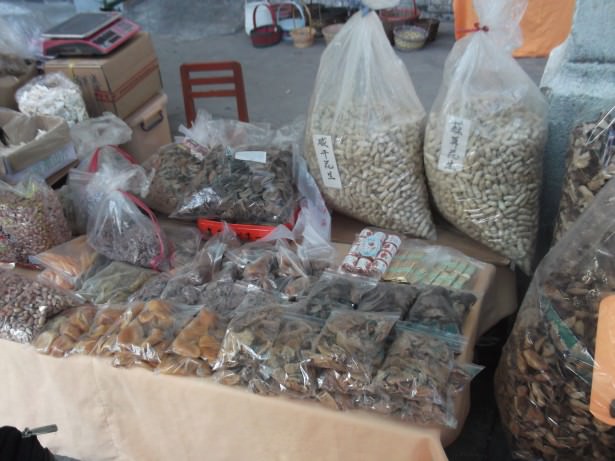 Local market stalls in Chikan – Chinese fruit instead of packaged brand names is a breath of fresh air.

Chikan was established during the Qing Dynasty, governed by Emperor Shunzhi. The streets and buildings of the current Chikan Town were built at the end of the 19th and beginning of the 20th Centuries. Despite being Asian to the core, the residents of Chikan did something slightly unusual for the Chinese. They modelled their buildings on what they call “Western Architecture” and this is clear to see. The three storey buildings alongside the river give us reminders of parts of Europe somehow. I couldn’t put my finger on it, but these buildings are unique. They are a rarity in Asia and the local people in Chikan and in the Kaiping Diaolou have certainly been creative and inventive in their design.

How much does it cost to visit the Historic Town of Chikan?

In essence it’s free and believe it or not, I didn’t spend a penny there (the food I tried was bought by one of our group!). Essentially it’s just a village by a river and therefore the entrance is free. If you’re on a real budget and are doing the Kaiping Diaolou Tour then you could just do Chikan, which is one of the few free parts of the tour. As you will read on my future posts, you need to pay for Jinjiang Li Village, Zili Village, Li Yuan Gardens and Majianglong. Chikan is free – you pay for your transport there and back and any food or drinks you buy. 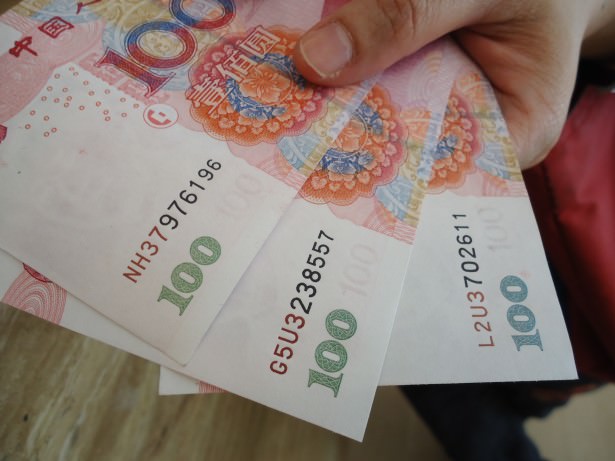 You want the good news? Chikan is entirely FREE to visit! Leave your Chinese Yuan at home…

Things to see and do in the Historic Town of Chikan

For me, admiring the design of the buildings overlooking the river is the high point of your visit to Chikan, but here’s a quick top 5 things to see and do there. 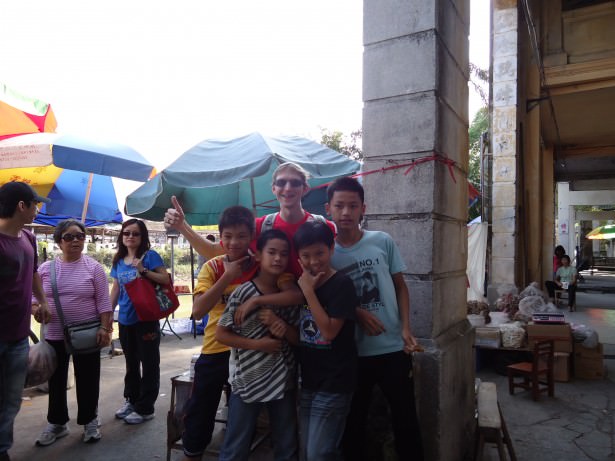 Things to do in Chikan: Meet the locals – here I am with the kids enjoying each other’s company!

If you are foreign and have a “western face” the locals will be intrigued. All the kids wanted their photo with me, some of them even flashing posher phones than my one (a Motorola C168) to get photos with me. I was the only foreigner in town. You can chat away, and in all honesty if you wanted a job teaching English for a few hours, you could probably do it and get a free meal out of it. 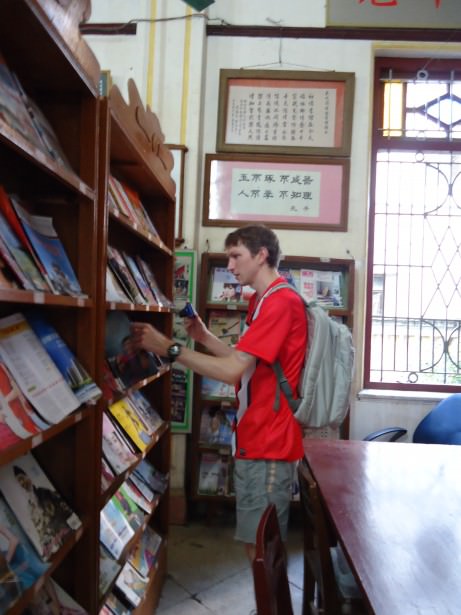 Reading the books and magazines in the old style library in Chikan, captured without knowing by my girlfriend!

As someone who used to love libraries (before the internet took over), the library in Chikan is something else. Old books and magazines, dusty shelves and no sign of any computers of internet, this is a proper old school Chinese Library. Really worth seeing. 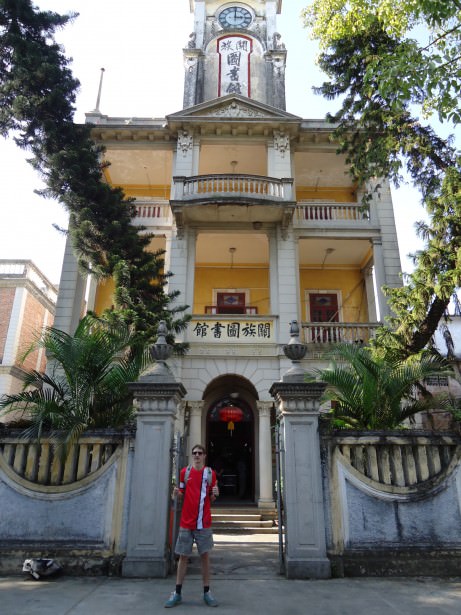 Outside the library in Chikan, Guangdong Province, China.

3. Walk by the Tanjiang River

The river that runs through Chikan is called the Tanjiang and there is one main bridge across it. You can just walk along it on both sides, admiring the view. Or stop for a tea or a cold drink and relax. You’re miles from the commercial world! 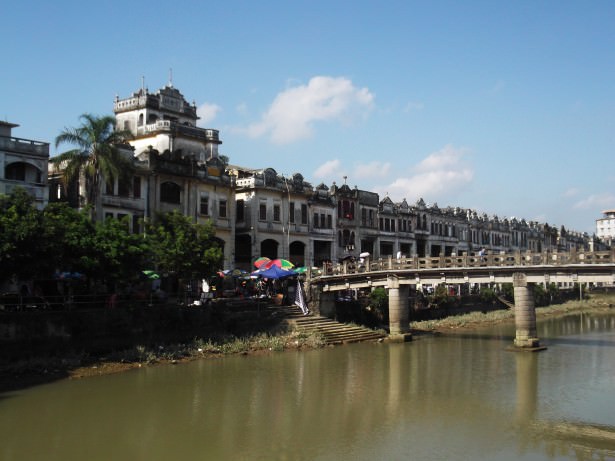 4. Visit the “Newer” Part of the Historic Town of Chikan

What? Go all the way to an Old Town and then see the new town? Yes, mainly so you can see the difference. You can walk a few streets up and see places selling Coca Cola and with a few advertising boards up. It’s a sublime difference BUT even the newer part of Chikan isn’t commercial. As I say, you’d be hard pushed to find a shop selling iPods. In fact, I’m pretty sure you won’t find one. 🙂 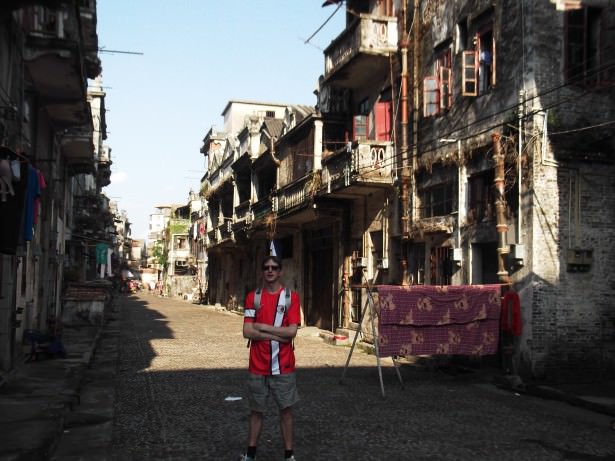 Taking time out to see the “newer” part of Chikan. Even here, it’s still gloriously bereft of any commercial impact. I’m a 1980s boy 😉

There are loads of outdoor stalls in Chikan selling local street food. By this I’m talking mainly about dried fish and dried mandarin skin. 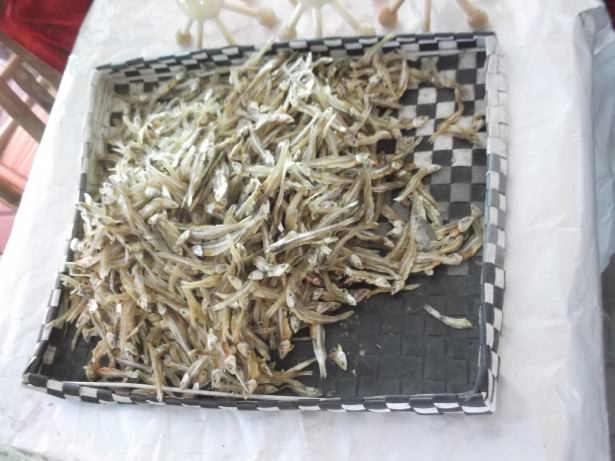 If you’re into it, get your fix of dried fish and all sorts of old school Chinese dried fruit and seafood.

I’m not a fan of fish in general and definitely not mini Chinese fish which has been sitting out with flies swarming round them all day in the hot sun. But for those adventurous you can sample all sorts of fishy delights. 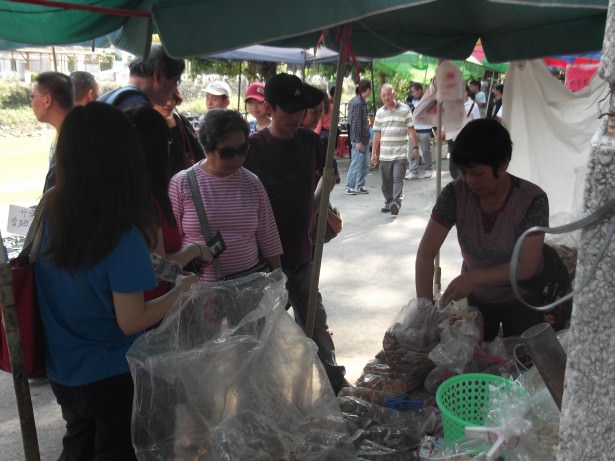 Shopping locally in the many fruit and fish stalls in Chikan – lots of local and unusual dried foods to try.

I stuck to eating dried fruit, of which mandarin skin was the nicest. Sweet and tasty. The Chinese, to their infinite credit can make food from ANYTHING! 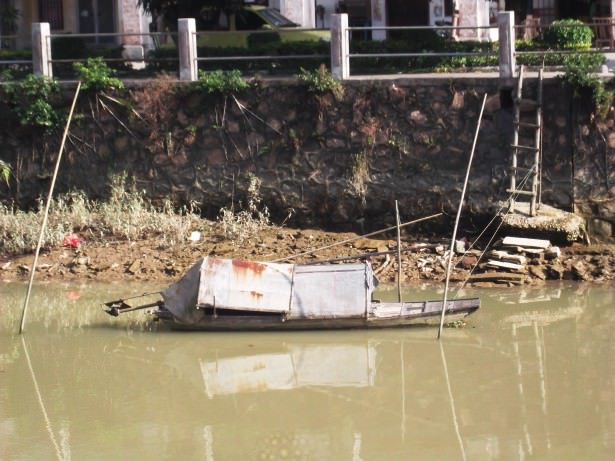 For a bonus point you can also possibly enquire about a short cruise on the river on one of the boats. You could try asking one of the locals – we didn’t actually do this as I’ve done Chinese rivers and lakes before but worth checking out to add to your unusual travel repertoires! 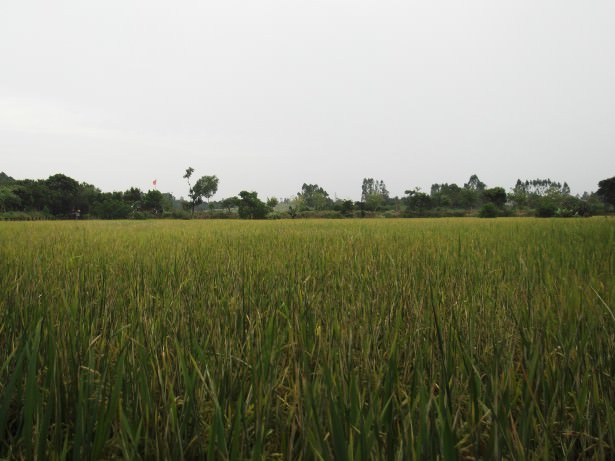 On the edge of town crop fields keep the local employed as does the impact that tourism has on the community. The locals are extremely friendly and this is a safe place for you to visit. I simply love places like this as it is only through going to places like the historic town of Chikan that I feel I am really travelling. I live a lifestyle of travel and I wouldn’t have it any other way 😉

My Videos from Chikan: