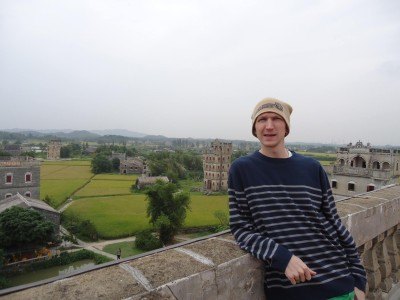 On my series of touring the impressive Kaiping Diaolou in China’s Guangdong Province, we headed next to Zili Village in some truly remote countryside. We had already toured the historic town of Chikan, the beautiful village of MaJianglong and the JinJiangli Village. As well as this we managed to eat turtle soup, eel fried rice and have a night out in Kaiping City! Zili wasn’t even the last stop of the two day long Kaiping Diaolou Tour. 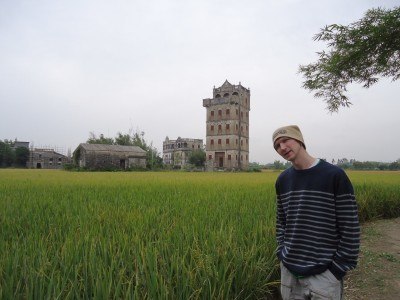 Touring the Zili Village of the Kaiping Diaolou in China

Zili Village is basically a cluster village within the Kaiping Diaolou range of World Heritage Sites. The Zili Cluster village contains scattered towers and is situated deep in the countryside. You will need a ticket and you pay to get inside its compounds, whereas entry to the town of Chikan of course is free – as it’s just a town. The entire Kaiping Diaolou range are situated near the city of Kaiping in Guangdong Province of China, we based ourselves there in the Milan Hotel. 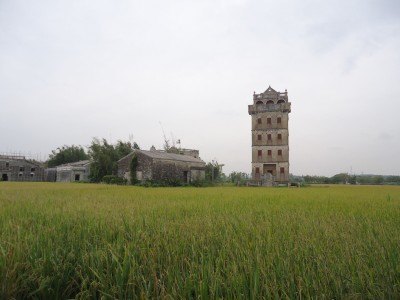 Zili Village is in remote countryside

How to get to Zili Village
As I mentioned on the previous posts on Kaiping Diaolou Tour there are really only 3 ways to get to these places and those ways are:
1. Hire a car and drive yourself.
2. Go as part of a bus tour.
3. Hire a driver.

If I was travelling alone I would choose option 2 there as it will work out better value and you might also meet fellow travellers to share the experience with. On this occassion myself and my girlfriend had a member of the family, her brother Gok) taking us round, so it was a case of chip in some petrol money and off we went! 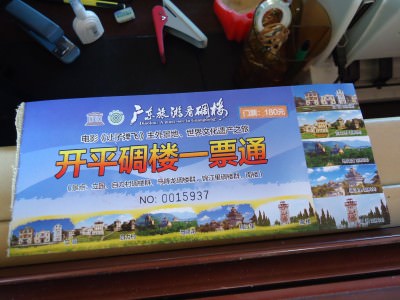 My ticket which includes entrance to the other Kaiping Diaolou Sites.

In terms of where Zili actually is, it is west of the city of Kaiping firstly along the highway 325 and then on the smaller road (like an A road) to the right which is the X555. I wouldn’t like to try to find Zili on my own. All signposting is in Chinese but without stress, fuss, hassle or getting lost we arrived at the entrance to the Zili Village in the Kaiping Diaolou Cluster! 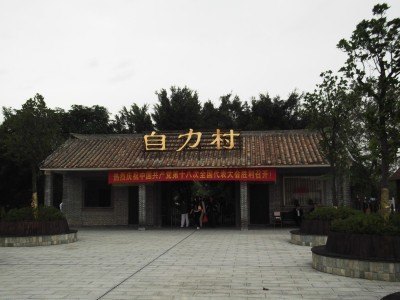 The entrance to Zili Village

Once you get there, just show your ticket and pass through the gate and then you can walk to the various Kaiping Diaolou buildings within.

Touring Zili Village, Guangdong Province
OK so you will need to understand a bit about what this place actually is rather than just visit. I had done a bit of research and picked up a leaflet from out hotel, but I was able to buy at book at the shop in Zili village, this was only 25 Chinese Yuan/RMB (£2.10) and contains a lot of photos and information on the Kaiping Diaolou series, however most of it is in Chinese. 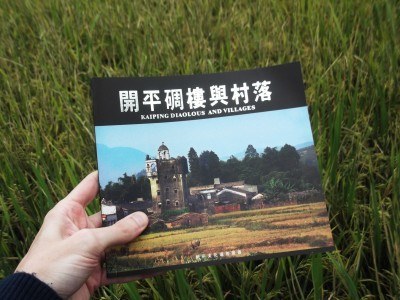 My book on the Kaiping Diaolou Village

so I read up on it through that. The leaflet at the hotel and my book was a lot more detailed, even if they included some errors lost in translation. 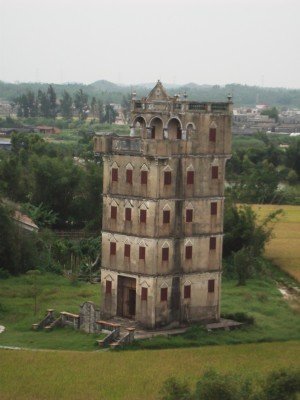 Despite the fact that I loved the previous three places we visited on the Kaiping Diaolou tour, Zili is the most popular one and the most recommended. It has the largest collection of Diaolou and is only 11 kilometres from downtown Kaiping. 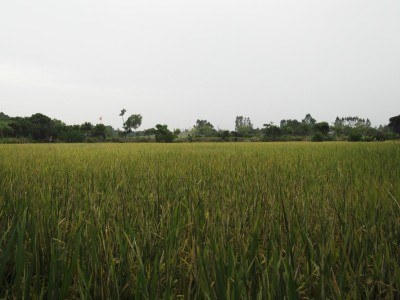 How much does it cost to enter Zili Village?
OK so at the entrance you will buy a ticket which includes entry to 5 of the Kaiping Diaolou so you are better off visiting a few of them (we visited 4 of the 5 and also added Chikan and Kaiping City which are free of course). 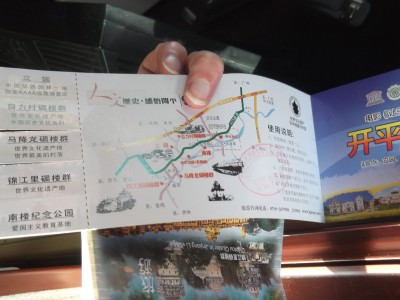 This ticket costs 180 RMB/Chinese Yuan per person, a fee which might seem expensive but it’s un-negotiable. The ticket includes one visit to each of the five main sites, of which Zili is one. 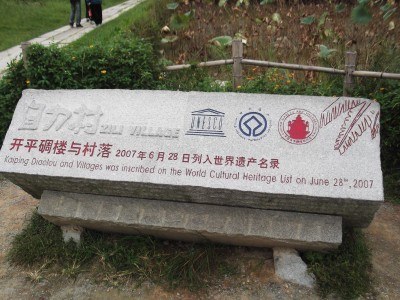 What is there to do at Zili Village?
You basically tour the village, entering the buildings, reading what it’s all about and admiring the architecture and the views! You do it at your own leisure. Here are the four main things to do and the three open buildings within the village:

1. Paddy Rice Fields
What was different about Zili was that it has a setting amongst gorgeous Paddy Rice Fields. China is superb for this type of landscape, you might have read about my time in the Canola Fields of Luoping or the Rice Fields of Yuanyang. Outside the countries I have lived in (Northern Ireland, England, Australia, Hong Kong), I have spent more time in China and made more visits to China than any other country and it is not hard to work out why. 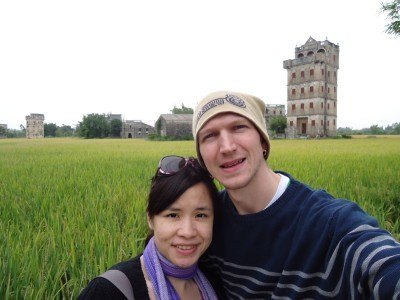 2. Mingshi Lou
Zili Village has more Kaiping Diaolou than any other in the series and indeed there are fifteen towers here. When we went (November 2012) only three were open to the public, but that may change. Mingshi Lou is the tallest one and therefore offers the best views. It was built in 1925. 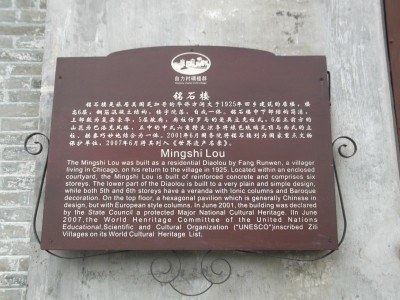 Information board at Mingshi Lou

The top floor offers great views – there is a hexagonal pavilion which has influence from European and Chinese architecture. 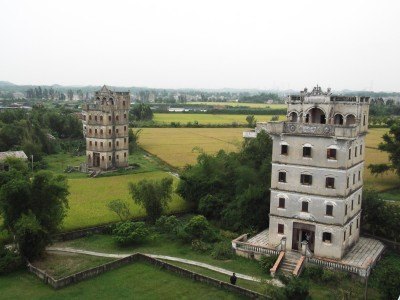 View from the top of Mingshi Lou

3. Yesheng Julu
This shorter and stubbier villa is called Yesheng Julu. All of these buildings were built by the Fang clan, who left China to make their money in Malaya and Chicago before returning to Guangdong to construct these buildings. 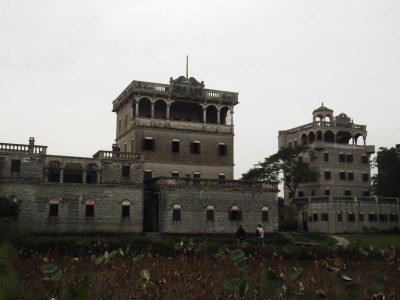 4. Yunhuan Lou
The last of the three buildings was the Yunhuan Lou which translates as “mist and mirage”. This is the more isolated one and my personal favourite. 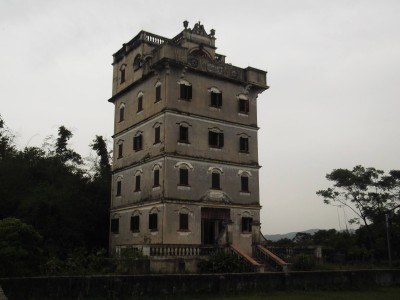 If you want to know what is inside the buildings – they are of course family homes so we are talking bedrooms, living rooms, kitchens etc.. These Kaiping Diaolou were built by wealthy Chinese families to house their clans within. It reminded me a bit of the Fujian Tulou that we toured. 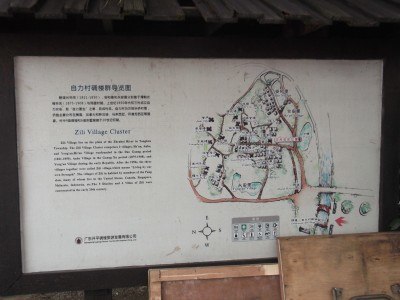 A map of the Zili Village Cluster

There are a load more villas here of course but 3 was enough for me and to be honest inside they all kind of look the same! Here are some photos from in and around the Kaiping Diaolou in Zili Village. 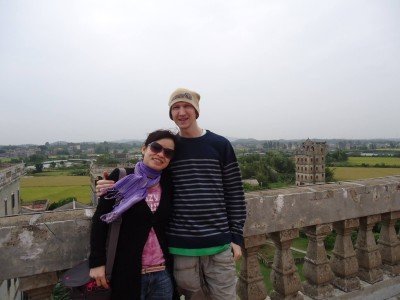 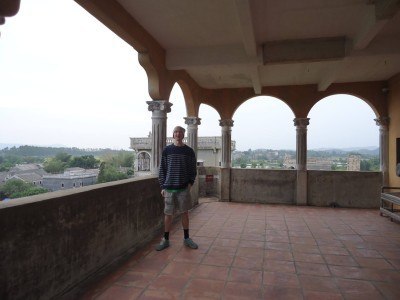 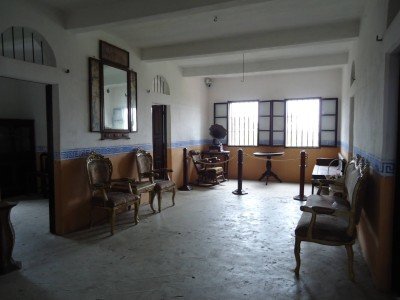 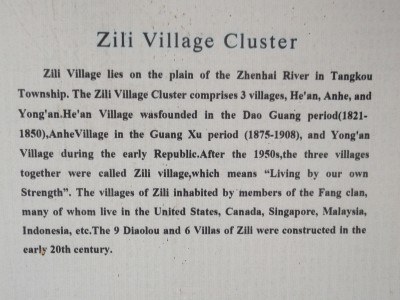 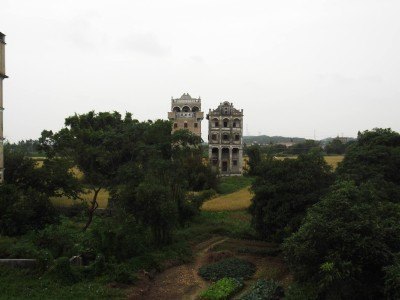 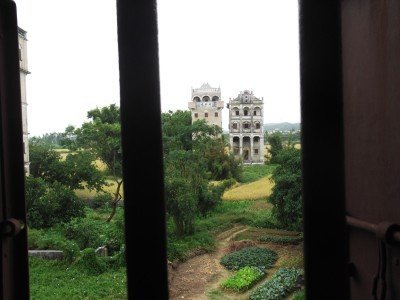 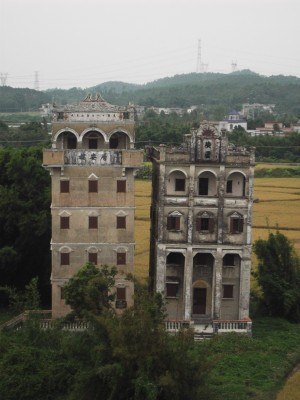 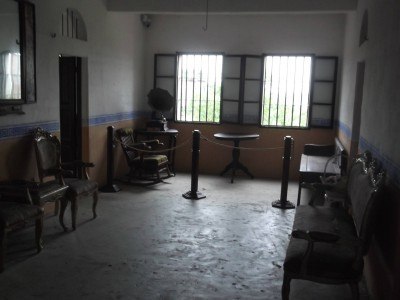 After seeing the villages of Chikan, Zili, JingJiangli, and Majianglong within the Kaiping Diaolou in China we next headed to the more modern Li Garden which has no Diaolou but serves as a museum and a pleasant garden. If you were really in a rush you could do 5 of the Diaolou in one day I guess. But I was pretty glad we spaced it over two days with the bonus of a night partying in Kaiping! 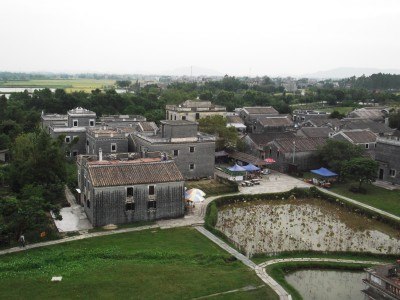 View from the top of the Kaiping Diaolou in Zili Village

Here are some of my videos from the Zili Cluster Village in Guangdong Province, China: