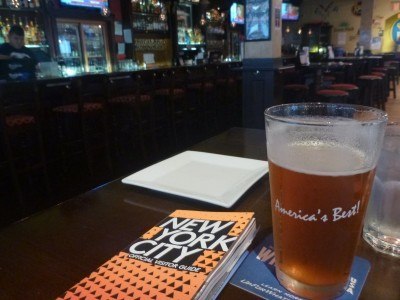 New York City is definitely not one of those “cities less travelled” and it crops up repeatedly in tourist magazines. However, aside from the touristic sights, coffee shops, and skyscrapers, one well-known fact about New York is that it has a fantastic night life and despite some drinking laws, it is generally a 24-hour city. If this really is a city that never sleeps, there might be some great bars that stay open when most of us are asleep.

So just for once, forget the diners and the chains of restaurants and bars, and head out to a good old Irish pub in Manhattan to have a good time. Come St. Patrick’s Day, the Big Apple literally turns green, but what are the best Irish pubs in a city with dozens of them? Check out this lucky six Irish pubs once you have checked into your hotel in New York City.

The Dead Rabbit seems to have won more awards than any other bar in New York City, and has twice been named as the best bar in North America. The downstairs Taproom bar is a traditional pub with craft beer, bottled punch, and whiskeys of the world. Upstairs, there is a massive range of 72 cocktails served, as well as some excellent food and good old “Irish craic.”

O’Hara’s Irish Pub is the most poignant and sentimental Irish pub on this list. Due to its proximity to the former World Trade Center Twin Towers, this pub was badly affected during the 9/11 tragedy. Like a Phoenix from the flames, the pub has risen as one of the finest pubs in New York. On the walls there are images from September 11, 2001 and a book of photos to act as a tribute and reminder of those New Yorkers who lost their lives in the tragedy. This pub is not for the faint hearted. Have a quiet pint and a “wee whiskey.”

Yet another Irish pub with a bit of history to it, Dorrian’s Red Hand takes its name from the red hand of Ulster (the red hand of O’Neill). It’s a popular bar at happy hour with draft beers from $4. If you ask the owners, they might even tell you the story of the famous red hand.

While some of the other Irish pubs on this list embrace modernity and serve up 21st century food and drinks, Donovan’s Pub levels the scales! This place takes you back in time. Unusually, it’s also a single tiered building as it is in Queens, so you’re not getting sloshed in a New York skyscraper.

Photo by Steve Rahaman via Trover.com

It doesn’t get much more blatant than calling your Irish pub, simply “The Irish Pub” and this place is a cosy, well-decorated pub with all the usual aspects of a bar from the Emerald Isle. Guinness, live sport, live music, and happy bartenders.

The last bar on the list is arguably the most authentically Irish pub in New York. McSorley’s Old Ale House claims it is the oldest Irish pub in the city, dating back to 1854 according to some sources. The pub often features in the New York media and was one of the last pubs in NYC to open its doors to women, with women sadly banned from the premises until 1970. Along with Donovan’s on this list, your visit to this place might seem like you have stepped back in time, which is no bad thing.

So those six Irish pubs should get you started if you want to embrace your Irish roots without leaving the country. There are many more in a city which has certainly warmed to Irish culture down the years.