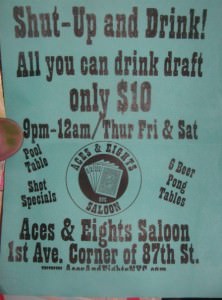 Right it’s back to crazy stories again and just looking back on my travels, the amount of mayhemic stories I have had that have never been aired or seen the light of day is hard to fathom. So here’s another one!! And the rest of them will all be featuring at some point believe me – inspired by my best mate Millwall Neil – he told me “keep blogging but put all the crazy stories up!”. Luckily today’s post doesn’t need an warning notice with it. There’s no sex, nudity, fraud or passport loss. It’s just a tale of me getting drunk with my travel buddies in New York City. FOR $10. That’s drunk. New York City. In a Bar. For $10. Yes I got drunk in New York City for $10 in a bar on draught beer! 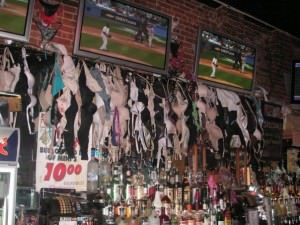 For $10 US Dollars, myself and 7 others drank the bar dry on a special “All You Can Drink Night” in New York City. As this backpacking adventure reaches its 6 year anniversary, how the hell did I do it? How the hell can I remember it? Here’s a full account of the night I…got drunk in New York City for $10!! 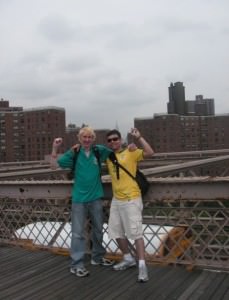 Backpacking it in New York City with Cassiano my Brazilian travel buddy.

I was on a backpacking world tour at the time and New York was one of the first cities on my hitlist that time so I made my way round all the sights the first few days and settled in – I had 8 days in the city as I wanted to do it properly. Nothing major in terms of spending – cheap and cheerful and have a few quiet beers. However my best mate just happened to be working outside New York City at the time and was very busy, but he could spare a night to come and visit me. “It had to be good” I remember thinking. I didn’t want my mate Neil to come all the way to NYC for a drink and me, who was backpacking there at the time have nothing planned. So I left the hostel for the afternoon and went for a walk looking for inspiration. On that walk some kid hands me a flier for a $10 All You Can Drink Night!! Are you kidding? This was a gift from the Gods. Neil and I had no way to contact each other in those days, we didn’t use Facebook much and certainly had no mobile phones, but my previous message to him was to meet in Mr. Bigg’s Pub at 7pm on the Thursday night. That plan remained and I knew he would be there. He knew I would be there. 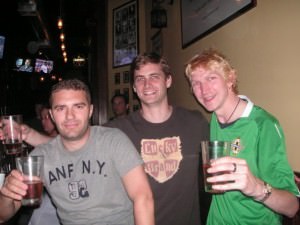 Inspired by this flier for $10 all you can drink, I headed back to the hostel to chill for a bit and play online blackjack then thought about just rounding up people from the hostel to come out and join the party. I mean there was no catch – I had been handed a flier for $10 All you can drink. Who would turn that down? There weren’t a lot of people around late afternoon and time was getting on and I didn’t want to be late for Neil so I rounded up a crazy Aussie guy called Simon (who was in my room), and downstairs another Aussie called Zisis and a Welsh dude called Marc and we headed to Mr. Bigg’s, which was on the corner of 10th Avenue and 43rd Street. 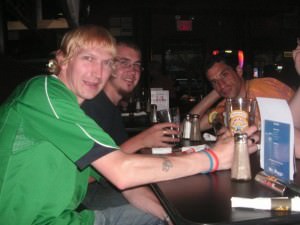 Where it began – Mr Biggs Bar in NewYork City, USA.

That’s when I told them the surprise. “Have you got $10?” I asked. “Yes, why?” “Oh just that’s all you’ll need to get pissed tonight – we’re drinking this bar dry”. Have some of that and me and my new Welsh mate and Aussie mates high fived as we ordered a beer in Mr. Bigg’s. Which by the way was a buy one get one free beer for $1 at the time. That’s right! Hence why I arranged to meet Neil there initially. 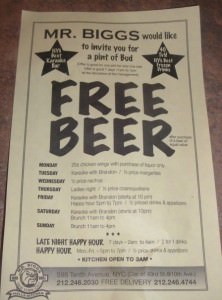 We were getting the beer down and loving it and then I told them – “oh my best mate’s coming – haven’t seen him for ages – used to live with him in England. Hope he can find this place!” “Is he English?” they asked “Yes!”. “Then he’ll find find it”. True to his word Neil my best mate wasn’t even late, he saunters in with a Canadian mate and suddenly there are six of us. “Get these buy one get one frees down you lads and let’s go to the next pub!!” It’s an international drinking night. Simon says to me – Aussies, an Irish lad, an Englishman, a Welshman – we’ll drink them dry!! 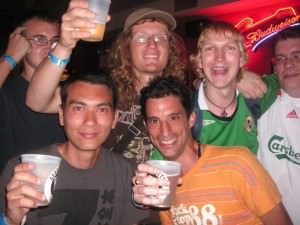 We headed on the subway to the Aces and Eights Saloon , the bar which had the “Shut Up and Drink” night. The Aces and Eights Saloon was on the corner of 1st Avenue and 87th Street. The “All You Can Drink” thing started at 9pm. I told the lads we were turning up on time and milking it. We got there at 8.58pm. “Your two minutes early” says the doorman. “Oh that’s ok” I said to him “We can wait two minutes – we’ve all got our tenners ready!” And that was it – we paid $10 US at the door, got a stamp on our hand and were given a glass. We were told if you lost the glass you’d have to pay another $10 for a replacement. Bollocks to that said Neil and I as we just asked the bar girl for extra glasses. Nobody had to pay for another glass. The party was on. 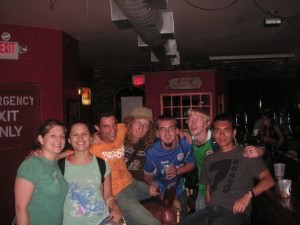 Betcha By Golly Wow! All you can drink for $10 in NYC! Smashed!

We met some girls from the US and a Jamaican lad called Ricky, plus a few others. We played beer pong downstairs while continuing to drink and drink and drink. It was hardcore I’m telling you. We were all so happy and so young and free. It was easy! 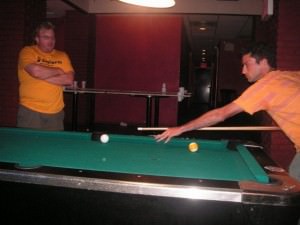 Another lad who played in the pool competition at Aces and Eights Saloon all you can drink night in NYC.

Then we played an international pool competition. There were about 8 or 9 nationalities – most of us from our group plus a few others (one of whom is in the photo above, not the guy playing – that’s Simon). 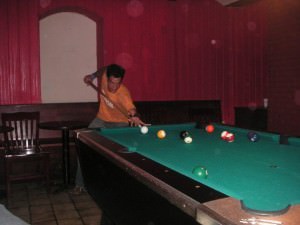 Simon wins the International Pool Competition for Australia in the Aces and Eights Saloon in New York City!

I remember getting to the semi final of the pool competition and being beaten by Simon the Aussie. Simon and I then went up to get another beer and a keg had run out so we were onto a new keg, another beer, it was endless. Still hadn’t spent a penny or a cent inside. Only the $10!! We were milking it and it was three solid hours of drinking! 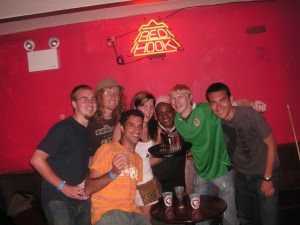 Then the song “Land Down Under” by Men at Work comes on, Simon necks his beer, gets another one (free of course) and we head to watch him in the final against Ricky from Jamaica. The Jamaican lad must have been a dead cert to win having been a New Yorker now having emigrated from Jamaica. Home soil and all that. But we were all necking our beer and cheering Simon on. 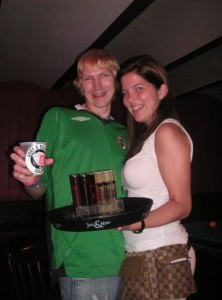 One of the bar girls then brought down some shots. Simon the Aussie won the pool competition, the beer flowed and that’s the last I remember…I got drunk in New York City for $10. 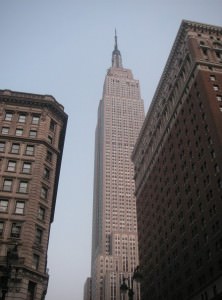 Thanks to all who attended this manic night – no videos exist of it, but the photos serve their purpose. Cheers to Millwall Neil Macey, Simon Panossian, Zizis, Marc Beard, Justin, Ricky, Caitlin and all the other guys who we won’t remember…BECAUSE WE WERE TOO DRUNK in New York City!

As my travels progressed since then I later lived with Neil in Australia (Parramatta) caught up with Zisis in London for a beer once and also travelled round Taiwan and Korea with Neil. I spent almost 2 years living in Australia yet never met up with Simon – promise he will be the first person I contact if I make it to Perth sometime. Since that night I have had a load of wild nights and more crazy stories will come, but come on, back in 2007 to get drunk in New York City for $10 must have been pretty damn good. I won’t forget that night for as long as I live, which is ironic because the last few hours of it, I don’t remember! Cheers guys, and happy safe travels…if you want to read some more of my crazy stories I’d start with the drugs in Argentina, naked in Antarctica and shitting in Australia ones, plus the full list so far here.

Here’s a video that should bring back the memories of the memorable night at Aces and Eights Saloon Bar where we got drunk in New York City for $10 back in July 2007: