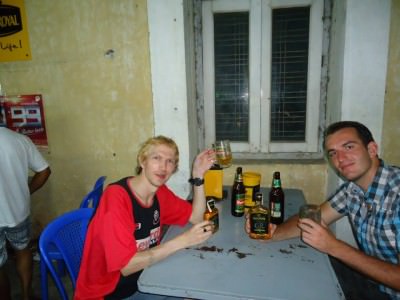 Tonight I recount yet another alcohol fuelled night of backpacking, as I recollect a night in Mandalay in Myanmar. While staying in the Royal Guest House (much less posh than its title suggests), I met Gijs, a cool Dutch guy who was doing Korea and some of Asia. We decided on a few beers out on the town and a bite to eat. 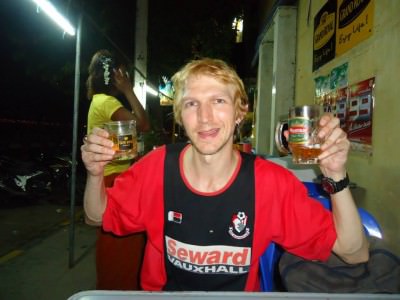 Beer for starters in Mandalay, Myanmar.

We headed down to the palace area, where there is a moat surrounding the actual palace. Along the rim of the moat are a load of local off road bars. There were certainly no other backpackers about so we sat down for a beer with the locals. Beer was cheap enough at around 1 US Dollar. The biggest surprise was the whiskey… 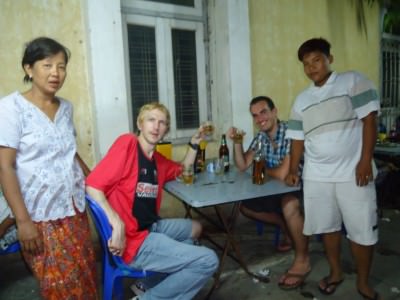 Gijs and I drinking the cheap whiskey in Mandalay, Myanmar

So some locals came over and there were PR girls offering bottles of Mandalay Rum and Whiskey. As a cheapskate I initially wanted to turn them down until we found out they were 50 US cents for a triple shot!! Crazy stuff. I had a day of temples and touring up the next day but we still launched into them! 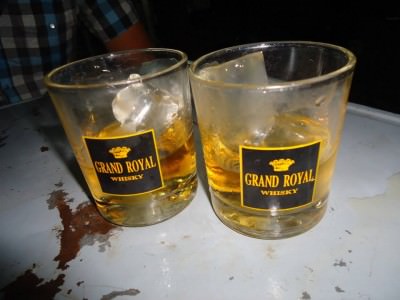 Grand Royals on a Thirsty Thursday in Mandalay.

It was Grand Royal whiskey and went down well. As we sipped them in the heat by the palace, I had a slight feeling in me that nights like this wouldn’t last forever. And they don’t. I’m 33 now, and my nights on the town and the heavy booze need to slow down. While Thirsty Thursdays will be full of a load of archival drinking tales for years to come, there was a realisation as I sipped the whiskey that I wanted to slow down a bit. 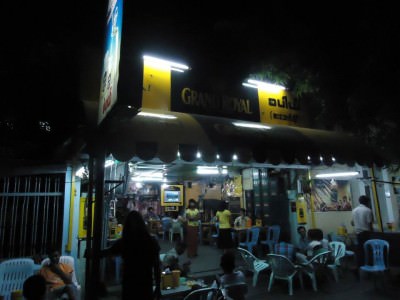 One of the recent and hopefully last crazy Thirsty Thursdays!!

I didn’t go mad on the triple whiskeys on this particular night but it reminded me of all those crazy all you can drink boozey nights from my early backpacking days, that I’ve recounted a few times on here.

This is a poignant post actually tonight and I type it deliberately about a boozy night because I’m off the drink again. I had a horrendous crazy night in Stepanakert in Nagorno Karabakh last week on Armenian brandy and haven’t touched alcohol since. 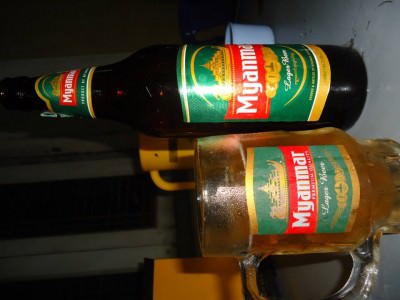 Right now I’m relaxing with a cup of tea staying healthy for a bit. I’d estimate if my girlfriend reads this she might raise a smile. I hope she knows that I’m giving crazy nights a break for now. From thirsty thursdays to a teetotal Thursday tonight, it’s a mad world, but be careful not to milk the cheap booze and freebies. Your liver might not recover!!