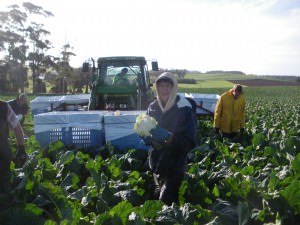 My final flirt with cauliflower harvesting and indeed working on Tasmanian farms came at Phil’s Farm on Loanes Lane, Ambleside in East Devonport in Northern Tasmania. I had spent almost 6 months living in Tasmania, working on farms almost the entire time and still fitting travel and sightseeing in on my days off. As a torrential rainstorm cut short my final day of wages in Tasmania, I packed up my cauliflower gear for good, and within hours of working my final shift at Ambleside, I was on the Spirit of Tasmania ferry heading back to Melbourne, the same route I had entered the island from some 5 and a half months earlier… 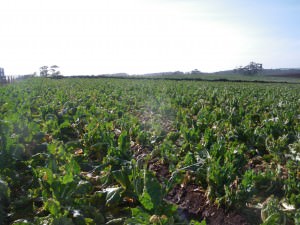 Endless cauilflower fields like this were how I spent one and a half months working at Ambleside.

The farm at Loanes Lane, Ambleside was owned by the farmer Phil. I got to know lots of the farmers during my five months of extensive farming work in Tasmania. Phil was a really good bloke and I was actually the only foreigner that he allowed to become part of the full time crew on his farm for the period. A French couple came and went, leaving me to be the only non-Tasmanian on a huge farm of never ending cauliflower paddocks. 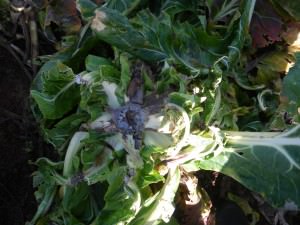 While working on cauliflower fields, you have to cut thousands of caulis every day! It’s tough but rewarding work!

Days were long, hard and mundane. But I liked them. We had some sort of routine and system. I would arrive for work in my own car around 6.45 am and join the crew. You would do four runs filling up endless blue boxes (lined with white bags) of fresh cauliflower. Utensils were a paint stripper and gloves. I also carried my iPod and listened to 5 live Podcasts and loads of music as I worked! 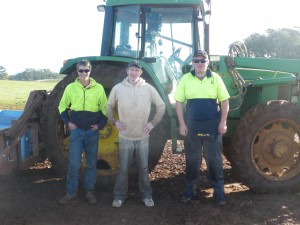 After work with the two main tractor drivers – Sam and Kaiden at Ambleside.

The main tractor driver was Sam, a younger lad and there was also Kaiden. Our main team consisted of 8 cauliflower cutters as I recall: Greg, Helen, Jai, Sean, Chris, Tim, Ulson and myself. I became decent mates with Greg and Sean and had a wee pint down their local at Turner’s Beach the night before I left. I also went to watch the local Aussie Rules football with Chris in Forth. 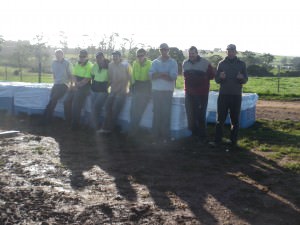 With my team on the final day of cauliflower harvesting at Phil’s Farm.

When I told the farmer Phil that I was leaving he was surprised as his cauliflower fields had another 5-6 weeks work left in them and I could quite easily have worked 6 days a week and saved another load of money. But the football World Cup was on, I had arranged a road trip to Brisbane to stay with my old mate Owen Millar and watch the matches with him. Then I had decided to head back to Parramatta to work in the pub for a while before heading on my next adventure. Everything worked out the way I planned. 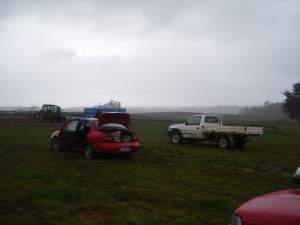 The place where we parked beside the cauliflower fields taken on my last day – the storm clouds emptied from the heavens and the field got waterlogged and that was my final flirt with cauliflower harvesting…and Tasmania.

If you want to get a farming job in Tasmania it’s pretty easy. All you will need is to have some kind of valid work visa and be hard working and self motivated. I got my work through Hayley and Diane at Work Direct in Devonport and loved my time there. Here’s a few of my posts to help you out:

– Get an Australian Working Holiday Visa 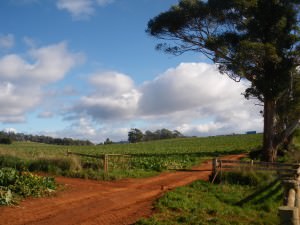 It’s totally worth doing the farming work. I was sad to leave the farming lifestyle behind and take the boat out of Tasmania, but life had moved on for this travelling Northern Irishman and I was fresh and ready for the next challenge…

Here are my videos from Phil’s Farm at Loanes Lane, Ambleside, East Devonport:

Me showing you how to cut cauliflower at Loanes Lane!: