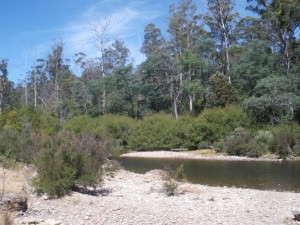 It sounds French. I’m not exactly sure what the link is there. But I’m living in Devonport, only about 10 miles from the village of Latrobe. Latrobe is the self-proclaimed world capital for the duck-billed platypus. Apparently this small village has loads of wild duck-billed platypus.

Its a weird looking mammal. Not quite a fish, not quite a land mammal, with its weird beak and slim but wide body, the duck-billed platypus is something to be seen. So I took a day trip to Latrobe in search of the duck-billed platypus. Everything you need there is on the main street. Banks, post office, shops, pubs. Its very basic and no big brand names, but perhaps its better like that.

On the main street there is a small square with a tiny War memorial on a clock tower (a small one). This is the area called Latrobe Station Square, as apparently it used to be a train station many years ago. There were no signs of trains, train tracks or could I have imagined this part of Tasmania having trains. There is a train track and a railway in Devonport called Don River Railway, but its a gimmick. There is no railway here and no train network on the island of Tasmania. Although a false and misleading train is sometimes stationed by Devonport Harbour. “Tasrail” it reads on the side of the train, but its used only for cement and freight. There is one train track.


Off the main street in Latrobe, there is a road leading to a park or nature reserve on the outskirts of the Latrobe area. It’s Shale Road. This area is the Warrawee Reserve. So I drove down and parked. There were lots of people swimming in the river/lake there. It was a very hot day and the lake was similar to the place I went swimming in the Australian Capital Territory, a place called Casuarina Sands.


There was a map of the area and some information on the Warrawee Reserve. I was parked at the last place that cars could go – the rest was all on foot. I was hoping to catch a glimpse of the famous Duck-billed Platypus, the water mammal only found in the wild in Australia. I asked a man and his wife if they knew where I could see them. They said I was in the right place but you had to be lucky. Their daughter came out of the river, and said the same thing.


So I had a wee dander for about 15 minutes around the lake and the general area, but I didn’t see any sign of the duck billed platypus. And I still haven’t…they have them on the back of a 20 cent coin here, and you can buy fluffy and cuddly duck-billed platypuses in a lot of shops in Tasmania. But I have to see the elusive creature…


I will try Latrobe once more before I leave Tasmania, and then just pay to see them in an aquarium.


What Is It? – Latrobe, a village near Devonport, Tasmania.


Why is it famous? – It is the WORLD CAPITAL OF THE DUCK BILLED PLATYPUS


LOOKING FOR A DUCK-BILLED PLATYPUS AT WARRAWEE RESERVE:

A REAL DUCK-BILLED PLATYPUS IN LATROBE: