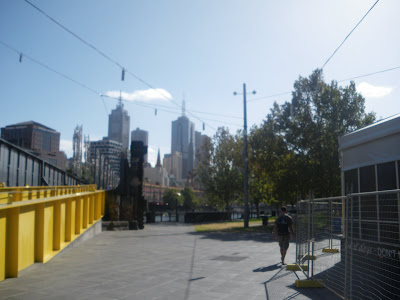 Melbourne the city is in itself very different to Sydney and Canberra, the other two main cities we had visited up to this point. Melbourne seems to be slightly older and traditional, evident from the fact it has trams and traditional streets not dissimilar to London. There is a lot to see and do in Melbourne that it may happen that I go back there again sometime and check out the things that I may have missed, including going up to the top of the Eureka Tower, the highest vantage point on land in the southern hemisphere from a building. 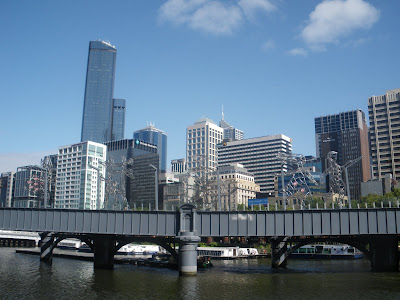 But what of the city itself? Well yes I was impressed, as I normally am by new places. I had my Berlitz Australia Guide highlight the main things to see and do, as well as having spoke with various other travelers, tourists and co workers over the previous few years. Plus, on arrival at the trendy Urban Central backpackers hostel we were given a full map and 4 page guide to Melbourne. At the time I was on my two week break from work (I had just left PJ Gallagher’s in Parramatta and my next job would be my current one as a harvest worker in Tasmania), so I was on a strict budget at the time. And found Melbourne to be cheap enough! 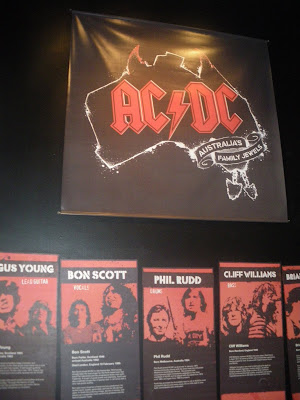 As usual lots of free things to see and do. We went to the theatre, actually called The Arts Centre and saw a free AC-DC exhibition and well as an Australian Hall of Fame for musicians. The AC-DC exhibition was like a small tribute hall to the band. They had everything you wanted to know about the band there. Of course we all thought AC-DC were a totally Australian band. But actually only one of them was born in Australia, the others all hail from bonny Scotland! Yes that’s right AC-DC are probably Scotland’s hidden gem. 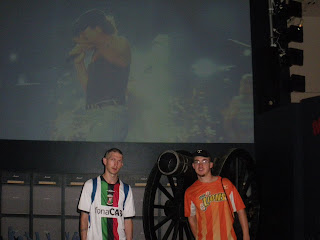 The exhibition had jackets and clothing items worn by the band on their many tours, copies of old vinyl and cassette singles were there. There was music blasting out and videos of the band on. Neil was probably more enthused than any of the rest of us that day (there was me, Daniel, Canadian Greg and Gemma). But I have gotten into AC-DC a lot more. My first Australian flat mate here, Orrin let me have all their albums TNT and Dirty Deeds Done Dirt Cheap, which I copied onto my iTunes library and have since given a few good listens. 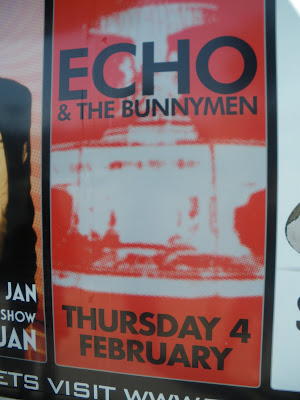 The song “Its a long way to the top if you want to rock and roll ” is probably my pick at the moment, it has pleasant memories of our “Wolverine” night in Canberra. Inside the Arts Theatre I was also to learn of the venue for the big concert that Thursday night…Echo and the Bunnymen, one of my favourite bands happened to be playing at the Palais Theatre, but that Thursday night proved to be our last in Melbourne and nobody else wanted to go to the gig, which would in the end have cost me around $100 to spend an evening on my own watching Neil McCullough belt out “Nothing Lasts Forever”, so I didn’t go to the gig, and I still haven’t ever seen Echo and the Bunnymen live. I’ll not let it get me down… 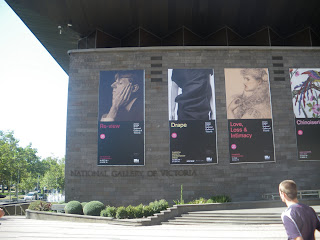 We also did the free Art Gallery, the National Gallery of Victoria. The most exciting things in there was the way the water dripped down the glass on the entrance and a section of Egyptian Art and Models. Opposite that is the Queen Victoria Park – the perfect place to relax on a hot sunny day. Down by the river. There is a few statues in this area as well including one of King Edward VII. It was actually just after we relaxed in the Botanical Gardens of Queen Victoria park that we met the one and only Roger Federer. If you can be bothered you can read on this very website here the story of meeting Fed. 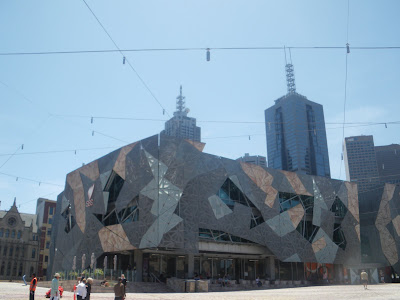 It is perhaps the northern part of central Melbourne however that stands out. The abnormal and elegant appeal of Federation Square is an area to be cherished. Again at lunchtime, a great wee place to sit and chill out away from the horrors of life. The square itself is made up of unusual shapes and is very different to “squares” in most other big cities. If you go there I hope you will see what I mean. A bar there called Transport overlooks the busy square and is also very abnormal. Silver style robotic era decor makes it look like the Future Zone on Channel 4’s “The Crystal Maze” programme, if you were around in the late 80s you’ll remember that show. Vague memories of it came back recently. 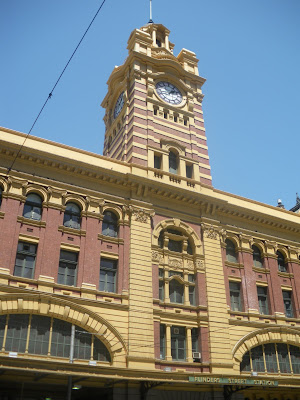 Opposite Federation Square lies the yellow and brown artistic out-terior of Flinder’s Street Train Station. And behind the square is St. Paul’s Cathedral. Further back on Swanston Street we also find the “town” hall. It always confuses me how “Cities” have “Town” Halls. Why not change the name of it to the City Hall once the town gets city status? As far as I could tell, the Town Hall is actually Melbourne’s City Hall. 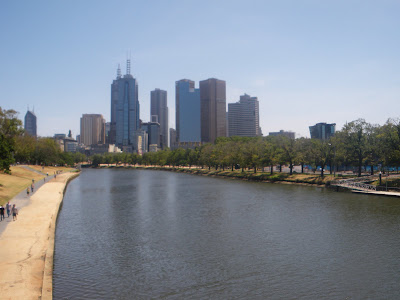 The history of the naming of Melbourne was also something which struck me as interesting. The original aboriginal name for the first settlement in that area, by the Yarra River was Bearbrass. It had then been the idea to change it to Yarra Yarra. This never happened, but a Tasmanian called John Batman was almost to blame in calling the city Batmania. Of course this was back in the day before the comic book, and was more to do with the fact that the latin letters “ia” are often added to the end of settlements down under: TasmanIA, AustralIA, VictorIA, so BatmanIA wouldn’t have been out of the question. 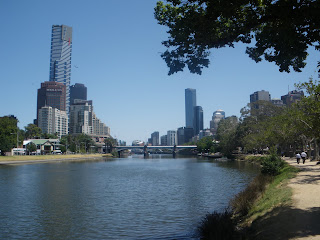 John Batman bought 100,000 acres of the area from the Aborigines and so Melbourne was nearly “Batmania.” However the governor of New South Wales decided that the British roots and traditional had to be maintained and it needed a British title. At the time, back in 1837, it was named after the British Prime Minister – Lord Melbourne. Nowadays that would mean calling the city “Brown”, or before that my surname “Blair.” There is still a Batman Street in most Australian towns and cities however, and in Melbourne itself a Batman park lies in front of the river. Not even Jack Nicholson or the Joker could have prevented this kind of comedy from arising. 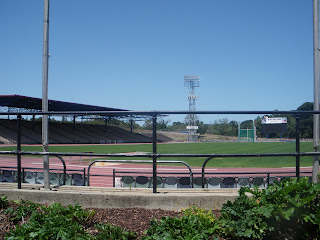 Melbourne also is the home of AFL (Australian Football League) – Australian Rules Football. There are quite a few teams in the area, but sadly when we were there the season hadn’t yet begun (it normally runs March – October). I work with a few guys who play Aussie Rules locally here in Tasmania and I hope to make it to a game sometime. Tasmania unbelieveably doesn’t have a team in the AFL, as its all down to money mainly and the bigger cities on the mainland seem to have it. 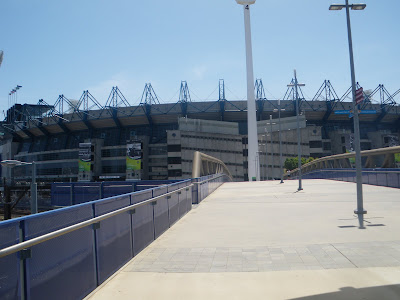 Melbourne is massive on sports. The football team, Melbourne victory also play in the A-League. The cricket ground in Melbourne is the largest in the world – the MCG (Melbourne Cricket Ground). Its in Yarra Park and we visited it, but didn’t go inside or get a tour. There was a cricket match happening when I was there, and we could gaze in and see it. The stadium holds 90,000 people. To watch cricket thats a phenomenal number. 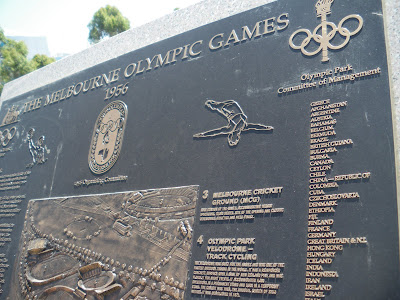 Melbourne hosted the 1956 Olympics, and you can visit the Olympic park. It has been out-dated, naturally and still hosts a lot of sports, but even the size of the Olympic area would have to be much bigger nowadays (I visited the one in Sydney – a lot bigger obviously given that they had the 5 hoops back in 2000). 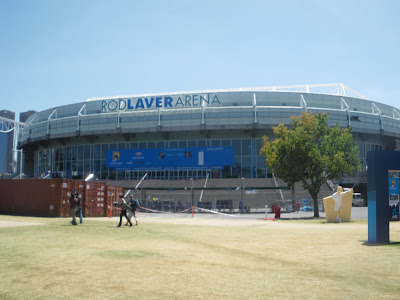 The area of Melbourne east of the Swan Street bridge is where all the sports centres lie together. I have never seen a city with so many sports venues in such a small area together. The Olympic Park lies between Batman Avenue and Swan Street, where we also see the Melbourne Sports and Entertainment centre. Opposite that is the Rod Laver Arena, which hosts all the major tennis tournaments in the area, and once a year the Australian Open is here. Beside it lies the Melbourne park and the Hisense Arena. Behind this is a railway line and there lies the world’s largest cricket ground. Within a 20 minute walk, you have seen the biggest venues in Australia for about 5 or 6 sports. 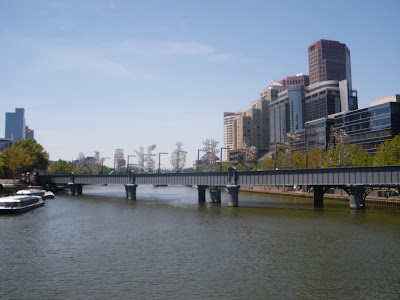 The bridges of Melbourne are also pretty. Some of them cross the river diagonally, and on one bridge (Queens Bridge) there is the history of how travellers from many countries came to be residents or immigrants of Australia or Melbourne. It was upsetting to see no mention or special glass plaque for my country Northern Ireland there. They had Wales, Scotland, England and even the Channel Islands represented. They had then shoved Belfast, Londonderry and Armagh onto the Ireland glass plaque. Clearly unaware that there are two countries on the island. I spent more time looking for the city of Debrecen on the Hungary glass plaque than the “Ireland” one. Mis-education is common in Australia. I found Debrecen on the Hungary plaque. 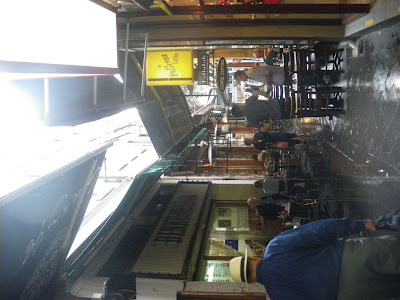 In between Collins Street and Bourke Street on the north part of the CBD you can see many traditional poky streets with souvenir shops, cafes, pubs and restaurants. This is something to enjoy. It is similar to London, without the horrible yuppy, business man with briefcase effect. Aussies wearing shorts and t shirts here is more common than suits, ties and an idiot munching an apple while on his phone between meetings. 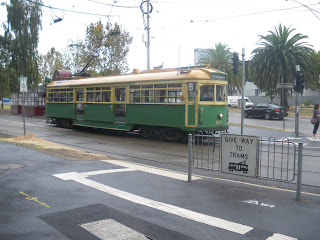 An Indoor Shopping Mall near Elizabeth Street has a massive Australian flag rotating underneath a glass ceiling. Flinder’s Street Station is fancy and worth visiting. You should also try the tram system in Melbourne. Trams are fantastic and that is the one thing that stands Eastern Europe above many other parts of the world. There is also a free bus service round the city of Melbourne (as there was in Parramatta). And a whole lot more – Neighbours, the ferry boat to Tasmania, St. Kilda beach and many many massive suburbs. 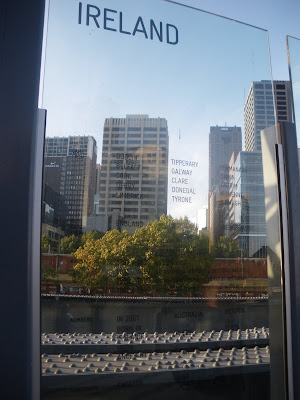 I simply havent seen it all there yet, so I will hope to go back sometime. Apart from the glass plaques on the bridge which neglect to recognise Northern Ireland, it really ain’t a bad old city. It will be a pretty cool spot to be in 2015 for the cricket World Cup as well so check out the ICC world cup venues & hotels.


Key Song – Pulp – Common People (will always remind me of Melbourne, and how I won a karaoke competition there)