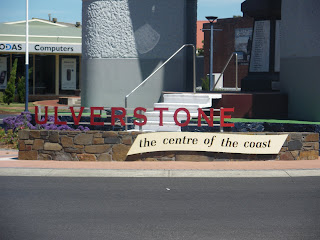 Ulverstone is really the next town up from my current base at Devonport. Without doubt it is nothing really special, but I felt it would be worth a drive at least to suss it out. The towns and cities here (with the exception of Hobart) all seem to have low buildings and a lot of the housing is on one floor, they’re mainly bungalows. Ulverstone is like this too. These types of cities are simple. 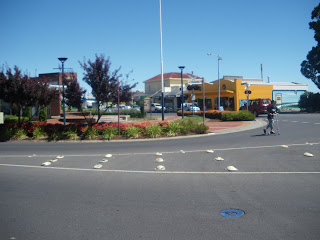 You have a few main streets with the main shops. Here that means Woolworths and Coles, the two largest supermarkets and also K-Mart the store for more general items, and electrical goods and clothes. You’ve also got the banks there – ANZ (Australia New Zealand), Bendigo, Commonwealth and St George appear to be the largest banks here. They all feature along Ulverstone’s High Street. 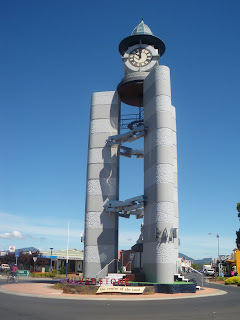 The centre piece of Ulverstone is the small clock roundabout. A well designed clock that triples up as a roundabout decoration and as a war memorial. The Clock’s foot carries the slogan – Ulverstone – The centre of the coast. Of course you cannot argue with geographical claims. But you can doubt how exciting a town can be when its main boast is that it is in the centre of a coast. One of the roads from here leads to the very friendly Tourist Information Centre. The other road leads to the library and the main pub in the town, which was so unimpressive I don’t remember it’s name. 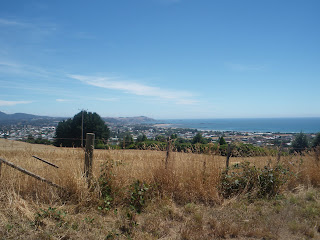 Perhaps the best parts of Ulverstone are the vast array of farming fields and hills overlooking the town. From there you get a fantastic view of the town itself, the fields leading down to it, and best of all the fantastic coast line, beaches and water in north Tasmania. 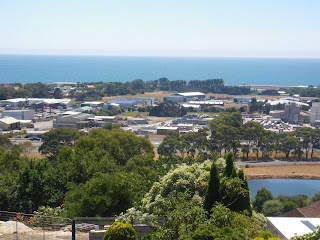 Or as I continue this post I will have to comment on the village right next to Ulverstone – the tranquil Turner’s beach. It’s odd that places in Australia can get away with calling themselves something like that – where I’m from you would never call a place something like that – for example there’s is Groomsport, a small village near Bangor my home town. If you had called it Jason’s Beach or something, it just wouldn’t feel right. Turner’s Beach, east of Ulverstone, somehow works. And it’s OK. 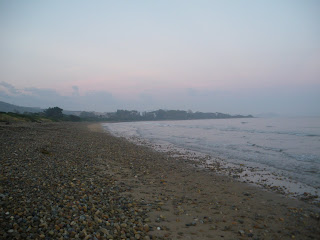 For me the significance of the title made more sense – “Turner’s” Beach as it was clearly a turning point in my life. The previous night I had said goodbye to Daniel, Neil and Paul in Hobart’s Pickled Frog Hostel. And as Daniel put it “it’s the end of an era.” He was right. This was my new era beginning. I watched sunrise there. At Turner’s beach. Alone. 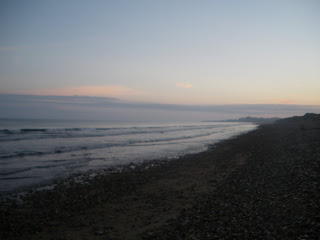 I didn’t know what was ahead for me in life. In 2003 I had left Northern Ireland behind. In 2009 I had left the entire United Kingdom behind. In January 2010 I had left mainland Australia behind. Now I wasn’t sure what was around the chimney corner. It was a poignant moment on life’s corridor. As I gazed into the warming Tasmanian atmosphere I became at ease with the fact that I was going to make it happen.


From that moment on, I gave myself a new challenge and desire. I wanted to work on a farm. And quickly. I got back in the car, moved into Tasman House (a hospital which has been less than elegantly turned into a Working Backpackers Hostel) and having made a few calls and enquiries I landed myself a job within 2 days of that moment. Having filled in the forms I needed at Work Direct on Devonport’s Formby Road, I was now going to become a broccoli picker. Something which was never my dream in life. But a new challenge to cherish and grasp with both hands.

Life had turned following the trip to Ulverstone and Turner’s Beach.

What Is It? – The village of Turner’s Beach and the town of Ulverstone, both on Tasmania’s northern coast.

What can you do there? – Go to the beach or the town centre.