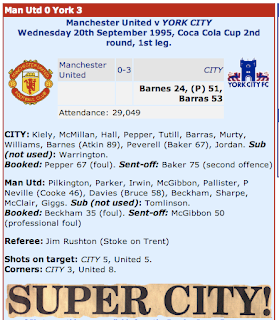 This post warps us back to Wednesday 20th September 1995, and a football match, which is potentially the biggest footballing upset in my lifetime. Manchester United, who had finished as Premiership Champions in 2 of the previous 3 seasons, and had also won the FA Cup twice in those two years, were at home to York City FC in the first leg of the League Cup, then sponsored by Coca Cola. Manchester United, playing at home rested only Peter Schmeichel (for Kevin Pilkington) and Steve Bruce (for Pat McGibon) and boasted a team full of superstars:

It was expected to be a walk-over for Manchester United, perhaps a 4-0 or 5-0 home victory. A chance for the team to show their class against a struggling and very poor York City team, positioned near the bottom of Division 3. Bookies had it 100-1 for a York City win. In the end they weren’t even close, as York City totally outclassed and outplayed Manchester United in their Old Trafford fortress! A 3-0 rout, inspired by a Paul Barnes brace showed them how to play football and left the football world shocked, and Alex Ferguson severely embarrassed! At the time a few of my mates from school (particularly Peter “Magoo” McIvor) were big Man United fans, and we all bought Yorkies bars for the next month or so, displaying them as badges with the “IE” taken off, just to read “YORK” as a reminder of this embarrassing defeat. Of course, it was a flash in the pan, as Man United won the second leg, but only by 3-1, meaning York went through, and have their name embedded into the history books forever. I doubt Man United have lost many matches at home since then, and even if they did, only by the odd goal or two, York dicked them 3-0 that night!!! And I remember it well.

Here’s the full story taken from (and copyright of) the York City Fc website:
This was not only a night to savour for every single City fan in the whole world, it was also a night for every non-Manchester United fan up and down the country to bask in City’s glory after completing an unbelievable 3-0 victory over eventual double winners Manchester United. It was also a night when millions of whinging glory-hunters from just about anywhere other than Manchester were silenced.

United put out one of their strongest sides with the intent of mauling City but the tables were turned as City, assembled at a cost of just over £100,000 and with odds of 20-1 to win, gave Alex Ferguson’s men a footballing lesson.

Manchester United chose to make just two changes to their side that had thrashed Premiership Bolton a few days earlier with Pat McGibbon making his full debut in place of Steve Bruce and Kevin Pilkington making only his second appearance for the reds as Alex Ferguson made a brave decision to rest Peter Schmeichel ahead of United’s European Cup conquest – a decision which was to backfire on him. City fielded an unchanged side from the one that had beaten Swansea 1-0 at the Vetch Field the previous Saturday with the Minstermen lying just second from bottom in 23rd place in the second division.

A sell-out crowd of 29,049 – with one stand under construction, included a massive 5,000 strong army of City fans and they helped cheer on their heroes to glory.

City settled quickly and made a steady and solid start, having the best of the early attacking chances and almost sneaked ahead after just a couple of minutes when long-range specialist, Scott Jordan, curled a shot just over Kevin Pilkington’s cross-bar after good work from Graeme Murty, Darren Williams and Paul Barnes. Barnes was causing McGibbon all kinds of problems with his clever play whilst at the back, Tutill and Barras were dependable as usual, coping well with United’s attacks and snuffing out any signs of danger.

City had another chance minutes later when Andy McMillan put in a deep cross which found Barnes but the five-goal striker fired wide and then the Minstermen came even closer still as a 25-yard free-kick from Nigel Pepper screamed agonisingly wide of the upright. At the other end all United could muster in the way of scoring chances was a tame header over the bar from Gary Pallister following a corner. United could hardly believe what was happening as City continued to out-class the English champions and the reds were made to sweat again as Graeme Murty made space in the box but his low shot was blocked by Paul Parker.

Gradually City were forced to defend deeper and deeper as United began to get their attacking game together although their shooting had obviously gone to pot as Sharpe blazed over and then Giggs managed to miss an open goal from a couple of yards. The Premiership side did manage to force Dean Kiely into one spectacular save, however, when McClair’s nimble header from Beckham’s cross forced the ‘keeper into a brilliant save at full stretch as he tipped the ball over the bar. From the resulting corner, Gary Pallister headed over when well-placed, once again. United had one further chance minutes later as Ryan Giggs ran through but the Welsh ‘wizard’s sorcery came to nothing as he wasted the chance, spending too much time dwelling on the ball.

Those misses were to prove costly for United as City sensationally took the lead moments later as Phil Neville’s poor control allowed Graeme Murty tosteal in and the pacey winger played a great ball to Barnes who turned brilliantly and then from all of 25 yards the striker unleashed a powerful shot which may have taken the slightest of deflections on the way towards goal but it was enough to fool dozey keeper Pilkington who managed to somehow dive over the ball and the ball squirmed away from the feminine-looking keeper’s grasp, sending jubilant City fans wild and simultaneously shocking the footballing world. Arrogant United fans and players alike were clearly rattled but in truth it was no more than City deserved for their gallant efforts.

As half time approached, it was City who were continuously causing United problems as United struggled to get to grips with City’s solid midfield, which saw David Beckham booked as United became increasingly frustrated by City’s flowing football. On the one occasion, in the remainder of the half, that they did manage to venture forward Ryan Giggs blasted high and wide to the delight of City fans whilst York gave the reds’ fans a huge scare as Nicky Peverell tormented debutant Pat McGibbon before charging down a clearance from ‘keeper Pilkington but fortunately for United, the former Hartlepool striker was forced wide and the chance went begging.

In the second half, United, on the back of five consecutive Premiership wins, started to put City under intense pressure with Ryan Giggs causing York’s defence all kinds of problems but they were still unable to break York’s resistance and the pressure was soon relieved moments later as the Minstermen doubled their lead

Andy McMillan picked up the ball in his own half and played a fantastic long ball from deep which found Paul Barnes who got in front of McGibbon and the young defender panicked and as Barnes homed in on goal, McGibbon committed a professional foul inside the penalty area and there was never any doubt that the Irishman would be sent off and that a penalty would awarded to City – despite ignorant protests from big-headed halfwits like Beckham. Barnes picked himself up and stroked home the resulting penalty in style, sending Pilkington the wrong way from the spot.

And if that was hard enough to believe for football fans around the world, it was to get better still as City fans were left pinching themselves as moments later City scored a third as Pallister fouled Peverell 40 yards out and Pepper’s free kick was met with a firm header from Tony Barras who beat dozey keeper Pilkington to the ball and send City fans into dreamland as they taunted the shocked United fans with chants of “what’s it like to be outclassed?” and the ultimate insult – ‘are you Scarborough in disguise?’
At this stage City were toying with United as the European giants almost went four down moments later as Nicky Peverell burst through the shaky United back three but, staring glory in the face, he shot over the bar when well placed inside the area.

United brought on Steve Bruce to tighten up their defence but within minutes of coming on, Bruce found himself rounding his own ‘keeper as Pilkington once again dithered and had it not been for Bruce, Peverell would have made amends for his miss moments earlier. City should definitely have found themselves sitting on a four goal advantage moments later however as Darren Williams dissected the reds’ international backline for Barnes to smash the ball past Pilkington but linesman, Mr Haxby, who had not put a foot wrong all night (despite the opinions of a handful of United fans – obviously oblivious to football), ruled that Barnes had strayed offside although video evidence later proved that Barnes’ third should have been allowed to stand and City’s victory should’ve been even more emphatic.

Late on Kiely made a couple of superb saves to deny Beckham and McClair when both seemed certain to score and even with ten men, after Paul Baker had received two highly debatable bookings after coming on as sub, City held out and even had one further chance to increase their lead as Pilkington once again hesitated and Williams’ almost nipped in to head a fourth but was denied by the young ‘keeper. Afterwards, club officials declared the win was the greatest achievement in the club’s 74-year history, as City had not only beaten one of, if not the best club in football, but comprehensively thrashed them.