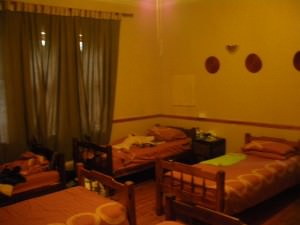 As a backpacker one of the best ways to constantly save money is to book into hostel dorm rooms (dormitories) in hostels. As a general rule of thumb and as an experienced backpacker, I know that the dorms with the most beds are the cheapest. I once stayed in a 34 bed dorm in Manila in the Philippines at a cost of just a few dollars a night. I have also stayed in a 6 bed dorm for really cheap in Australia and been the only person in that dorm for a couple of nights, so in essence I had my own room for the price of a dorm! 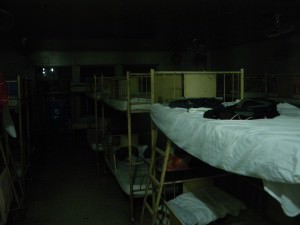 To makes things clear for you today on this edition of Monday’s Money Saving tips, here are my top 10 reasons for staying in dorms in hostels.

1. Dorms are cheaper than private rooms. Almost always when you go to book into a hostel, you will pay less for a dorm room as you are sharing. Immediately you are paying less than the person who is staying in the exact same hostel. 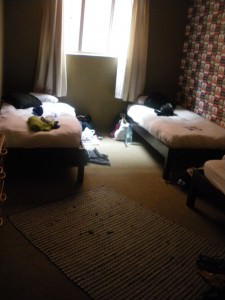 Another dorm, another dollar saved. Staying with two girls in the Happy Hippo in Durban, South Africa.

2. Dorms are sociable. If you are staying in a private room, you may not end up talking to anybody else in the hostel. However in a dorm room, it’s an easy conversation starter as you already have roommates and new travel buddies. I’d estimate that about 70% of my travel buddies down the years have become good friends just from staying in dorms. I’ll name drop a few of them as they won’t mind – Martin from Ireland, Suzuki from Japan and Jesper from Denmark. 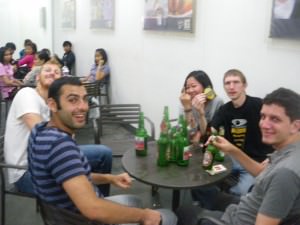 My mate Martin who I met as I was sharing a hostel room with him. Here we are out partying in Jakarta, Indonesia!

3. Sightseeing in groups. When you stay in dorms, your roommates will naturally ask you about sightseeing, where you’ve been etc. and you will ask them too. This automatically means you will get loads of chances to go sightseeing with new friends. 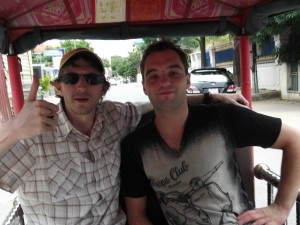 4. Waking up early. I hate lying in or sleeping in when I’m travelling and while I always try to set an alarm, there have been a few occasions where I slept through them, or forgot to set an alarm, cutting into valuable backpacking time. When you are staying in dorms you can ask your roommates to waken you up, or even more likely at least one of them will also be getting up early and you won’t sleep in. 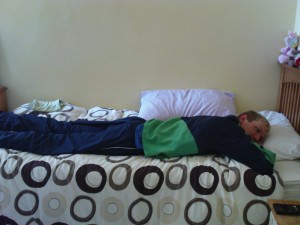 Less chance of lying in when you’re in a dorm – someone will waken you up! 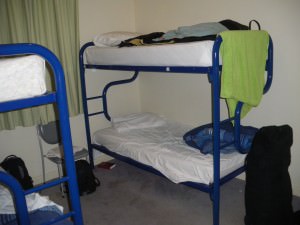 I was the only one in my dorm here – private room for cheaper!

6. Free gifts. When you’re rooming with others, you’ll find travelers help fellow travelers out. I booked into a dorm in Cuzco in 2010 and had only 5 hours before starting the Inca Trail. I had no time to buy anything but my roommate David from Ireland gave me his two liter bottle of water as a gift! What a legend. These types of things can’t happen when there’s nobody else in your room.

When you room with others, saving money becomes a lot easier – you can eat together, go into the city together and book tours together. Doing these things in bulk and with money saving in mind, means you’ll always get it cheaper when you’re in a group. Get talking to your roommates. 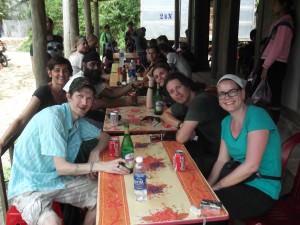 Travel buddies get together and save money – you meet them most often in dorm rooms!

8. You don’t want to become a posh “flashpacker” – I have to admit that I don’t really buy the term “flashpacker” as I find it a contradiction. I’ve met so called “flashpackers” and they will book into a hotel or a private room in a hostel and then try to save money on a meal or a tour . That’s not flashpacking guys – you’re a backpacker who likes a bit more privacy! My opinion of course, feel free to disagree. 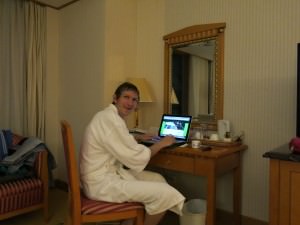 Flashpacking!! I hate it, but every now and then…this is really me. Dressing gown on. Posh Laptop. 5 Star Hotel (the only time I’ve stayed in one – it was in China!).

9. Sex. Mixed dorms are great places to pop your pencil out and get down to business. Be careful not to wake your room mates though. My full post on ways to get sex on your travels is here.

(Photo banned due to nudity)

10. Book into the dorms with the most beds.

Again obvious stuff here but you save more money and meet more people by booking into the biggest dorms.

And of course there are downsides by doing this, I won’t pretend it’s all bliss, here are my 6 downsides of dorm rooms.

2. Sharing crap toilet facilities. Having to queue to use a shower etc.

3. No privacy. You can’t just walk around naked (well you can) as there are others in your room. You might not get the space to read that book either.

4. Security. Other travelers as much as you hate to believe it, they STEAL things. Don’t leave laptops, cameras or Lonely Planet books lying around. An ex girlfriend of mine also had money stolen in Australia while she took a shower – there were 5 others in her dorm – hard to find a culprit.

5. Sleeping – maybe harder to get a decent night’s sleep.

6. Lights. You can’t come in late and turn all the lights on and waken up your roomies. Carry a torch.

So that was my 10 reasons to stay in dorms then! That’s it for Monday’s Money Saving Tips this week. Safe travels, whether its dorms or privates you prefer…