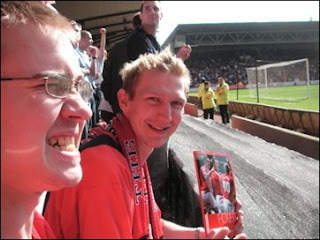 I met Lock In Lee (Lee Adams) in December 2003 as we both auditioned to be in “The Lock In” (Bournemouth University’s Big Brother), where we both got voted into the house, lived with each other for 48 hours and then Lee won and I came third. Lee became one of my best mates and he is a massive Nottingham Forest fan. Things turned sour for Lee, when in 2005, once European Champions two years in a row, Nottingham Forest fell into the third division and would be nestled alongside mediocre teams such as Yeovil Town, and ahem, my team of choice, AFC Bournemouth. Suddenly Lee and I would be in seperate sides of the stadium at the same match. When we realised this we decided to do both games in the first season for Nottingham Forest in the third tier (at least for a long time). Most people assumed stupidly that Nottingham Forest would bounce straight back up and win the league, however they hadn’t bargained on the newly promoted and Freddy Eastwood inspired Southend United, who fired there way to a second consecutive promotion, playing some great football in the process. The pundits had also failed to recognise the free scoring Colchester United, who warped past most teams in the division to finish in second spot. All this meant Forest weren’t even good enough to make it into the play off places. As I once remarked to Lock In Lee during that season “this is your league now. enjoy it.” And I fucking bet he did! Another time I shall recount that season’s November home match with Nottingham Forest, where we drew 1-1 and by all accounts could’ve won it. This post is all about another fantastic AFC Bournemouth away trip…to Nottingham! 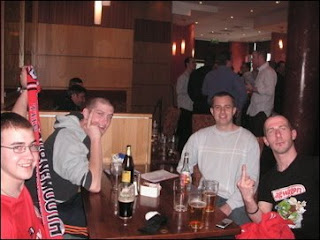 I didn’t often drive to Cherries away matches as I like to drink, so on this occassion on checking the bus and train prices, driving was the cheapest and easiest option, so I did it. The night before I had stayed with my mate Ben in Southampton and had managed “The Waves” (who at the time were the best band in the world) so I was on the piss the night before and then faced a drive via Dartford, Kent al the way to Nottingham. This was because none of my Bournemouth based mates (and at any rate I hadn’t met Dan Darch at this point, who would have went with me) were going, and I offered to pick up James and Neil. James and Neil had been waiting at a roundabout in Dartford for about 2 hours 44 minutes. I had woken up at 10 am and somehow bombed it up the M27, M3 and then M25 to meet them, probably just before midday. Once in the car, James put his iPod on (it was the first time I’d seen an iPod; I now own one and love them!) and we were pumping up towards Nottingham to watch the Cherries and meet Lock In Lee!! 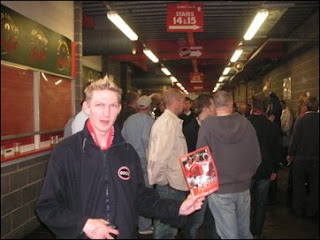 All I remember about the drive up was that we were all pretty tired and hungover and that I stopped for fuel near Milton Keynes somewhere. We were running late as it was, I then had to find the stadium, a decent parking space and make it to the ground before kick off. Lucky I had the tickets already then! At the time AFC Bournemouth were down at the bottom of the league and a draw was likely to be enough on the day to secure staying up for another season. Forest were on form though and the overdog for the day. It was AFC Bournemouth’s first trip to the County Ground, Nottingham for years and years and probably decades, and I was there, or almost as my car torpedo-ed itself along the M6. As we approached Nottingham it was almost 3 pm, so we had to admit defeat in missing the start of the match, and indeed a pre match pint. However as we drove past the City Ground, it was like 3.01 pm or something, then we had to find a parking space… 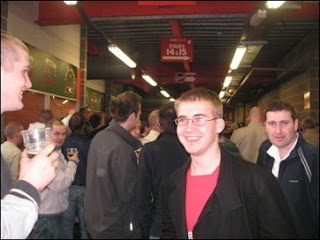 We crossed the river Trent, passing even Notts County’s ‘Meadow Lane’ on the way and managed to find a space in a retail park, which was no charge and also a maximum stay of 2 hours. We were risking it, but we didn’t want to miss any of the match. Neil, James and I ran quickly across the bridge by the river Trent and straight into the away end at Nottingham Forest FC. The match was still 0-0 and we took front row seats as we watched the Cherries (dressed in navy blue for the day) battle it out until a half time stalemate. We were right in the thick of the action, in a fantastic stadium, with great atmosphere and craic “Are you Derby in disguise?” was the chant to the Forest faithful, who welcomingly DIDN’T pour beer down on us, from their higher tier in the corner of the big stadium. I had texted Lock In Lee and we gave chants of “Can we hear Lock In Lee?” To be honest he wouldn’t have heard us, such was the atmosphere that day. We needed a win or a point to stay up, they had to win to fluke any chance of still making the final play off spot. The ground was full, the English sun was beating down and Neil and I wanted a half time pint, even if it was shit Carling in a shit plastic glass. This is British football league, and this is a cultured Saturday. 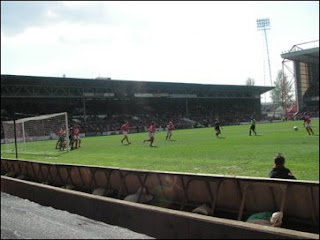 I think James and Neil joined the pint queue, while I got us the match programmes, which I often get on away matches, but not always at home, it gets too costly really. At half time we did indeed learn that as things stood we would be staying up, I met a few Cherry regulars at half time. Loud Nonny was there as was Paul the Loyalist and many pissed up Cherries fans in what was a party atmosphere. As Neil, James and I finished our pints, we had now managed to miss the start of the SECOND half as well, so really it was a madly rushed and hectic schedule of a day. Normally nothing would divert me from the 90 minutes of football. A loud cheer went up just after 4 pm and you know what, Steve Fletcher had scored for the Cherries!!! We went 1-0 up at Nottingham Forest in a crackin atmosphere. We made it back into the stands for the goal celebrations and as things calmed down, Forest began on the attack again, so much so that an equaliser was on the cards. And then it came… 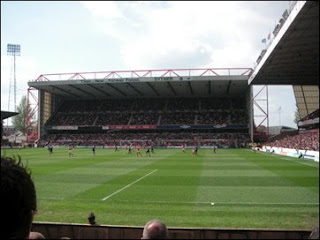 It was 1-1 and a nervous final few minutes saw Neil Moss save us a few times and we clung on for the point and the third division status. It was a great match and a great day out. No trouble, some sunshine, some beer, terrible drive, missed our goal, but then there was Lock In Lee to meet!!! And he wasn’t hard to spot with his mohican hairstyle we met up with Lock In Lee outside the City Ground, we dandered across the bridge to the Notts County stadium, where I posed with my Northern Ireland hat for a photo by Meadow Lane, before deciding a quick pint was in order before heading back to my car and departing ways. We didn’t get to see much of Nottingham (and indeed last week, I managed to miss our trip to Notts County v. AFC Bournemouth, but Lock In Lee and Ian Cupples (his mate who we met that day) took us to Hooters Bar, where ladies get their boobs out. Well they don’t but we can stare at them and wish. Me and Lock In Lee “love boobs” as we once told two Czech Republic girls. Unfortunately Hooters wouldn’t let us in with football tops on, so we had to make do with a pint in the posh bar of an even more posh hotel. Hilarious! And just the sort of place Lock In Lee and I fit in! The lads enjoyed a few beers in there, before we headed back to my car for the drive home to Bournemouth. On arrival at my car, James had stupidly left the passenger door open (in the rush not to miss the match!) and in the crime capital of Nottingham, nothing had been stolen. I was grateful for that, though next time I go to Nottingham, me and Lock In Lee will be on the piss together and his football team are now two divisions above. You get what you want out of life. But you fucking like what you get. Here’s to the next one!