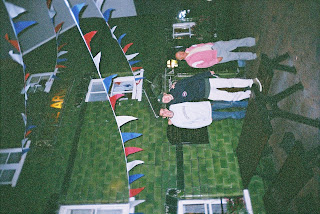 It was a quiet Monday evening in mid-August 2004. I was living with Neil, Jody and Austin on the Holdenhurst Road in Bournemouth. It was quite rare that we would all have the same night off, so when we did we normally would go into town, go to the football or go to the pub together…and on this one night we originally thought we would do a bar crawl via a train to Southampton. On arrival at Bournemouth train station, we changed our minds and so the “Poole Pub Crawl” was created. There were three of us, just, Jody, myself and Neil. 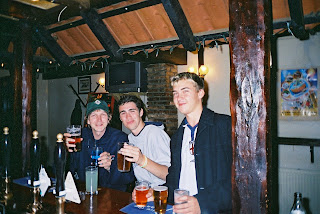 A stupid trip on the train involved sitting in first class and not buying tickets whilst also putting our heads out the windows to get a waft of the cool cool dorset air as we passed from Bournemouth through Branksome through Parkstone and then arrived at Poole train station in search of alcoholic places. If a song had to be played on that train it was “teenage angst” by Nirvana, even though none of us were actually teenage, or knew what Angst meant. Is that a real word? 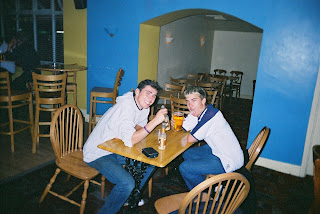 First bar we found was The Antelope on the main Pedestrian Precinct. So we popped in there and in the summer rain drank bitter under the umbrellas of a beer garden, which is not an oxymoron as we did drink beer in the garden, even if the weather tried to force us indoors. Another venture and we were again in a pub on the main street this time THE PUB NAME NEEDS ENTERED where more bitter/lager/cider was consumed on the second bar in a pub crawl where no bars were busy and the alcohol and jokes flowed. As I remember there was no football on the TV to distract us from our drinking and so we continued with a beer in the (usually avoided) Yateses. 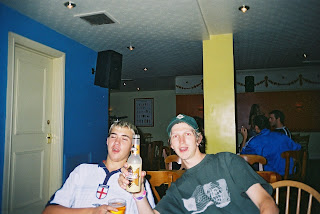 Yateses was a quick stop before the bright red Hog’s Head stood out at us on a street corner. In there another bit of pintage had to be done as we remarked on the friendliness of Poole’s pubs and the total lack of commercialisation which is more prevelant in Bournemouth (Poole and Bournemouth are not sexually related, though could be brothers). The deal was just one pint in each pub, and we tried to remember to take photos in each one as well to add to the memory (4 years on I’m glad of it I tell you). 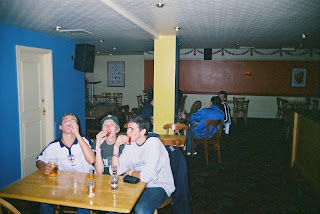 It was starting to get dark and we contemplated just getting the next train or bus back to Bournemouth and having another few beers there. However the point was it was a POOLE pub crawl so we decided against that idea and just ended up staying in Poole, and heading towards the seafront/marina/harbour which is constantly referred to as Poole Quay. On the way there was a wee pub on the corner which I’m sure has disappeared. The pub was called The Water’s Edge and the barman looked Gay. Well according to Jody he “looked gay.” Mind you he did wear a black string vest and spoke a bit camply as we ordered three beers at the unbusy bar. We’d actually turned up at a gay bar, but none of us seemed to mind as it was to be a quick beer stop then on to the next one. No time for milling around on a lads Poole Pub Crawl in August 2004. Although Jody did persist in being photographed beside the gay guy, the smile on his face tells it all, he was happy to get the photo took. Why, I’ll never know, that’s just Jody! 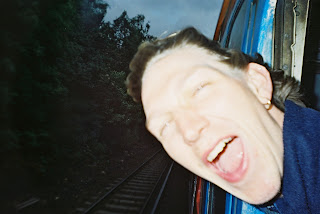 On exiting The Water’s Edge we popped into the Oyster Quay (or as I used to call it “Fish In The Wall”) where we watched live fish float by our pints as we aged ourselves drunkenly into the boatful skyline of Poole. In Poole I often gaze at the water in search of answers to questions in my mind. On this particular night the only questions were “which pub next?” and the answer was always easy – THE NEXT ONE. And along Poole Quay, it was normally next door… 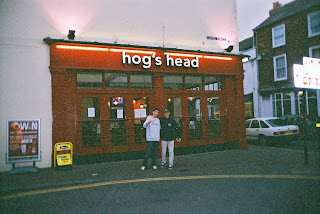 Up next was The Portsmouth Hoy, which definitely wasn’t in Portsmouth and we’re not sure if it was “hoy” or not. What I do remember is there was no toilet. Like in Pirate times we had to leave the pub and piss round the side. It was a traditional cosy wee pub again gaping across at sailors in the harbour and oversized females sipping beers which were by no means their first of the day. Nor were ours and by this stage we were all drunk and the talk couldn’t have been sensible. All three of us were due in work the next morning at 9 am, but nobody cared, we were staying in Poole till the pubs/bars shut. 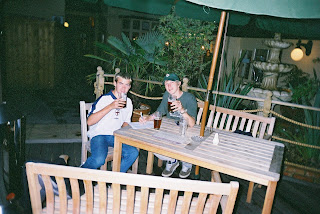 The Lord Nelson pub was next, it was also on the Quay and it was now nearing last orders so we had to consider options at this point. Walking home would have taken about 1.5 hours, the last train had gone, the last bus was due to leave soon and so we thought “well fuck it, if we’re going to have to split three ways and get a taxi home, so be it.” I hate getting taxis – they’re far too dear and taxi drivers usually don’t even want to listen till me. I’ll talk to them about anything. 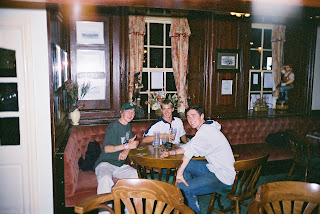 By the time we had sank the pint in The Lord Nelson, we dandered back on till the main pedestrian precinct in Poole where a shining light of a wee pub deliberately (in the days before 24 hour bars) shone on us and invited us in – it was a 12 midnight closing unlike the other pubs which were all 11 pm last orders. We had been drinking for about 5 hours or so and had visited 6 pubs, so number 7 was this little gem, where astonishingly we were sober enough to play pool in. Or perhaps not, as I don’t remember it. In there I necked a Blue Curacao and lemonade which used to be my tipple, I haven’t had one of them for years now!!! (In fact this one in Poole was probably my last) and before deciding on a taxi home, there was time for one last bar on the Poole jaunt – Chili’s! 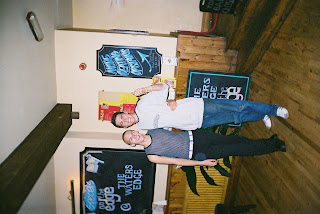 At the time I’m near sure that Chili’s was Poole’s only nightclub, it was open till 2 am, so we drank more beer in there and also moved onto those Chocolate Mudshakes, which seemed to be a fad. A craze at the time, another drink I haven’t seen for years. I could add these to my list of SMIRNOFF MULE and HUSKY’S CLEAR!!! Whatever happenned to Husky’s Clear? What an amazing teenage drink! Anyhow we drank in Chili’s and did chill out until it closed by which time, we scraped together the money for a taxi home to Bournemouth and all made it safely (even if hungover) into work the next day. What a great pub crawl, and on a random night back in August 2004. I’d recommend Poole for a pub crawl any day. Pint in each. These photos here will help fuel the memory…