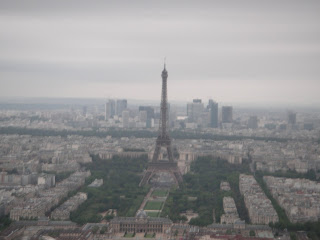 I had been to France three times before. All with my family on holidays in the summers of 1989, 1992 and 1993. During that time I had visited St Malo, Cherbourg, La Roche sur Yon, St Gilles and St Jean de Monts. The 2007 France adventure would see me breeze through Campeigne and Marseilles, before spending some time checking out Paris. A city I had neglected until now. I got in touch with my French friend Charlotte, who lives in Paris and was all set to see the sights for myself as I thought she would be on holiday, however Charlotte found a full day to show me round Paris. It was a free guided tour of a city famous for love. 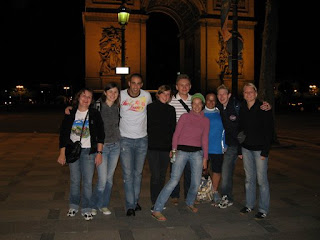 By coincidence my German friend Rene was working just outside Paris for a few days as well, so having made it back from Marseille one morning on a 3.5hour high speed train (TGV), I spent the day with Charlotte and met up with Rene for the evening. Rene had already driven me to Campeigne (north of Paris) and was going to drive down to Epinay sur Seine and book us a cheap hotel for the night. For the first time in seven weeks, I had actually needed use my mobile phone, which had been turned off the whole time, except one night in Prague where my Mummy called(!). 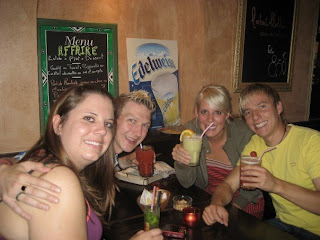 OK, everyone that has heard of Paris, knows about Arc de Triomph, Champys Elysees, Tour Eiffel and Notre Dame. So working my way round the sights was going to be easy and predictable. I bunged a hell of a lot into a four day stint in Paris, and found a lot of unobvious sights to see.

On the day with Charlotte, I went to the Louvre, which I believe is the world’s largest art gallery. Paintings of note are La Joconde/Monalisa and Madonna of The Rocks. However I found considerable more beauty in a painting by Constable of Weymouth Beach and many other less well known paintings and statues. I also saw the Venus de Milo and some Egyptian Art. However the Louvre is so massive that you could spend all day in it. I paid my 9 Euro entry and just spent 2 hours in there, for me that was enough. It sits close to the river Seine in the middle of an old courtyard, with a glass pyramid as the entrance. You are not permitted to take photographs of the Monalisa, but I did. Charlotte also took me to the Cathedral of Notre Dame (we didn’t go inside), many bridges over the Seine, Place St. Michel, Arc de Triomph (and the grave of the anonymous soldier), Champs Elysees (a street with many expensive shops and restaurants), Moulin Rouge, Montmartre (an amazing view of Paris) and the centre point of Paris (situated handily in the forecourt of the Cathedral of Notre Dame). Charlotte certainly knew the city well, and even took me to an Irish pub for an afternoon pint (this was at the top of the hill near Montmartre), an internet cafe to book my next hostel and an amazing French restaurant called Creperie des Arts (South of the river Seine, near the Fountain of St. Michel). I had both savoury and sweet pancakes in there. Lovely. 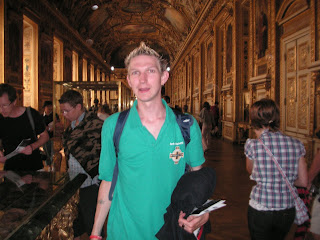 After changing a few times on the metro and RER, I finally said my farewells to Charlotte again and headed to Epinay sur Seine to meet Rene. Rene booked us a really cheap hotel just 10 minute walk from the train station there. It was Hotel Balladin and although I got lost briefly, I found him. We got changed, Rene found us two cute Americans to join us on a night out and we were off on a train doing Paris by night. Expensive yes, but also fun and you can always find an offer or a happy hour. We got a carryout for the train, including Desperados, Brauburger and Pelforth Brune. We then walked round in search of a cheap bar, and found O’Sullivan’s Irish Bar to be a good place to start. It was near a large Opera House (at metro station Opera) and we sat upstairs with our beers. After a few in there, we hopped on a metro to Bastille, to check out the bars there. We found one with a hapy hour on cocktails so that was where we went next. It was a rather small bar eponymously named Bastille’s Pub. I enjoyed sex on the beach and a bloody mary in there. Then Rene, Erin, Trisha (the two US ladies) and I headed in search of a cheap club. There weren’t many cheap clubs, the one we found was OK, and was called Wax. We got in no problem, but I noticed some people were turned away. I think having the two girls with us helped. After a dance, snog and drink in there, we were off again in search of another more chilled out bar. We did consider a night bus back to the hotel, but couldn’t find the right one. Then another Irish pub just turned up out of the blue. We went in, enjoyed free live music and I had a nice Guinness. After that it was gone 5 am, so we caught the first train back to hotel and sleep time.

I only spent one night in Epinay sur Seine, with my other 3 nights in Paris being spent in the Jules Ferry Hostel (which was in the Republique area and very nice). It took a bit of work to find a hostel at first, at such short notice and on the busiest August weekend of the year, I finally got sorted. Some cheap lunch from LIDL, which also did 330 ml cans of lager for 23 Euro Cents!! We drank quite a few of them. That’s 15 p for a beer!

In the Hostel at Republique, I met so many amazing people, including the simply perfect Jill (from Luxembourg) and another great Polish guy Kamil (from Warsaw!). I toured the city with Kamil one day and we visited Mont Parnasse (Europe’s highest building used for commercialism I believe), Luxembourg Palace, Bastille and the Parc des Princes (home of Paris St Germain). We also went to La Coupole for a beer (expensive and famous restaurant and bar). We teamed together a great crowd one night to go drinking and visiting to the Champs Elysees and Arc de Triomph, which at night is beautiful. Our crowd included a guy from Israel and some Austrian ladies. Plus this random Northern Irish guy with a passion for people.

I also tried some random drinks. Coffee in a small cup for 3 Euros, which goes in two sips, yet the French make it last for 20 minutes somehow. The Biere de Monde (Yes, the French make the STRONGEST beer in the world at 12%. Nice but a killer). A strange Vodka/Beer mix which was surprisingly OK. Some cocktails in a bar called Place Verte. 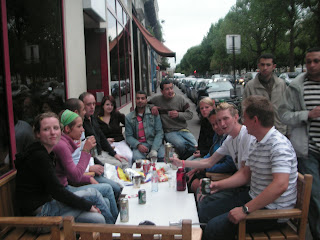 Soon though my Paris dream was over. I bore some gifts to Jill, Kamil and Yoshinori. I received in return a Luxembourg bracelet, a Canada keyring, a Japanese coin and a fan. Like I had done in Lake Taupo a month before, I felt I left a part of me in Paris. I’ll go back and find it some day, or at least seek the reason from the people I met there.

Strange Currencies – Euros and Euro Cents. The French Franc joined the dustbin of history many years ago.

Where I Stayed – First night at Hotel Balladin, Epinay Sur Seine (Fab, but out of the way) rest of the nights at Jules Ferry Hostel (Republique)

Moving Moment – Seeing how many people queue just to see La Joconde in The Louvre, when they are many nicer paintings around. For God’s sake it’s only the bloody Monalisa. To be fair I got my photo took we it as well.

FACT – The Germans were going to bomb the Cathedral of Notre Dame during World War II, but on flying over it, found it too beautiful to destroy and chickened out.