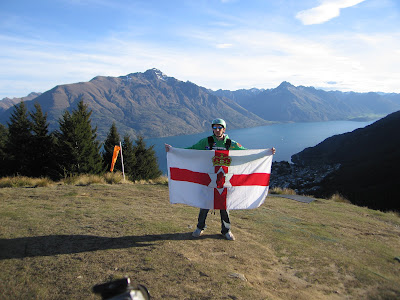 Well I certainly didn’t mean to do Para Gliding. But then life is better when its all spontaneous. Queenstown, by the way is a very popular tourist resort nestled in between two massive mountains ranges and national parks near the south of New Zealand’s South Island. 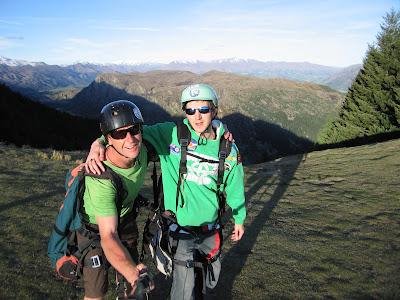 Over the years, Queenstown has developed into a party town of extreme proportion. Adventure sports by day, adventure bars by night. And a good mix of both is what makes people tick in this town. You really need to embrace both in order to have sampled Queenstown. 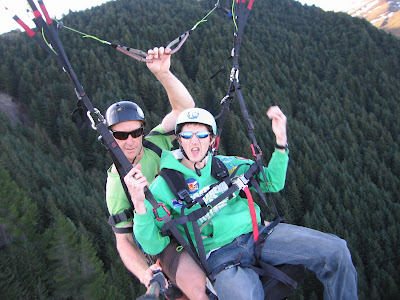 Now Queenstown is the HOME of the Bungy Jump, it was here on the edge of the town at Kawarua Bridge, that AJ Hackett (now a multi millionaire) developed the elastic rope adrenalin plan to start a new trend in adventure sports. I would say that most people who have visited Queenstown have done a bungy jump (or at least know someone who has). For some their sole purpose of visiting Queenstown is to “do the nevis”, the world’s second highest bungy jump, and probably the scariest. 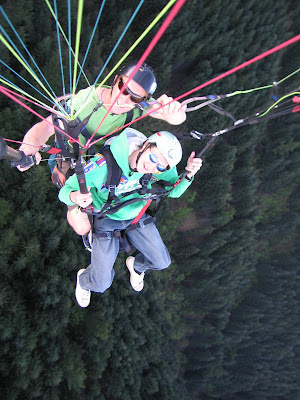 Set deep in a creek over the Nevis river, this is NOT for the faint hearted, those scared of heights, or those nervous people. However it’s also not for those on a strict budget, which is probably why not everyone does it. If it was a touch cheaper, I probably would have “done the nevis”, but I bungy jumped before back in 2007 at the splendid setting of Auckland Harbour Bridge. Staring at the whole of Auckland from a height, I jumped off as the only one in my group to have the balls to do it. 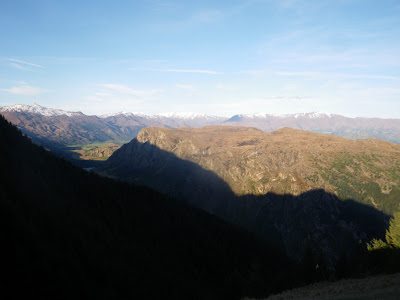 It’s called a bungy jump, so I believe one should do that, just step or jump off. Most people dive off dramatically, as you’ll no doubt have seen from the many videos. So my bungy jump experience had been done. It was time for something different. White water rafting perhaps?? No, sorry I done that for BBC back in 2008 in the mountains of Slovenia. Sky Diving perhaps?? No, sorry again I did the famous Taupo Sky Dive in New Zealand’s North Island. There are canyon swings, parachuting, but by spontaneousness and eagerness to go mad again I ended up doing the Para Gliding, which is the point of this post. 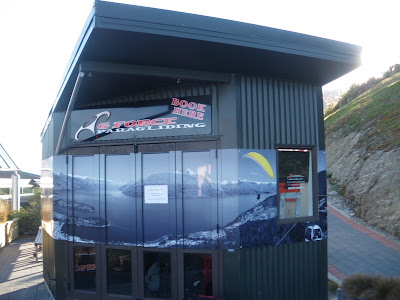 From the Summit of the Cable Car ride (or “Gondola” as Queenstown strangely calls it), I was walking round on my own looking for something to do. And there was Dan, stood by a Para Gliding Hut looking for customers. $199 it said on the sign. NO WAY. I had already decided my budget would be much less than that. But then customer service and the charm and adventure of New Zealand over ran my brain. 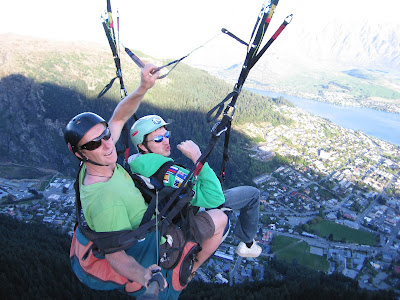 This gentleman Dan said “I’m closing up soon, if you want to go Para Gliding I’ll do a deal for $169!” Now I turned round, went into the hut and had a look and said to him “Does that include photos and DVD etc.?” and he replied…”Yep OK I can do your photos all in for that price, but the video is an extra $20, you can let me know after the Paraglide if you want the video.” I was in like McFlynn…

I asked him a favour though, I had travelled with my bag, so I got it handed in at reception, as it had my laptop in it and was a tad heavy and precious to be taking in the air with me. As I was the last glider of the day I couldn’t leave it in the hut – he really did close the hut after me!! This also guaranteed me free entry for the next 24 hours up and down the gondola ride, as it meant I needed to come back up to collect my bag. 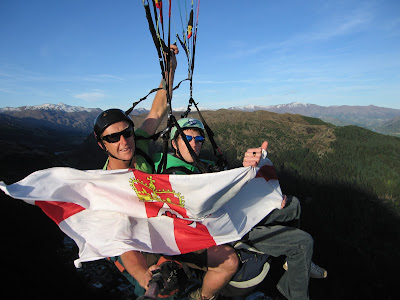 I also whipped out my Northern Ireland flag and asked if we could get some photos of it “in the air”, which he said was fine. 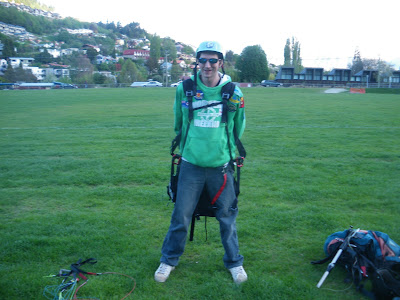 It all happened very quickly and I really should have put the flag away somewhere after the photos as it appears in every photo, and I’m gripping onto it for dear life, as the winds were a lot stronger than they look in the photos and video. 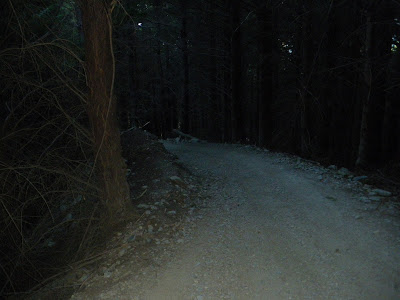 Starting the paraglide meant a dander right to the top of the hills at Ben Lomond. Dan was carrying the full paragliding equipment in his rucksack, which itself weighed 30 kilograms! It was about a 15 – 20 minute walk to the top, and the wind wasn’t particularly strong. 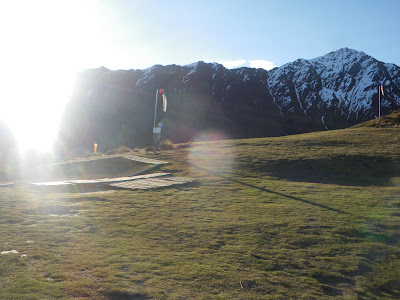 This meant I had to run harder and for longer before taking off. I ran one way to the edge of the cliff, while Dan ran the other, we were attached via a rope and then after that by a custom made “seat” within the paragliding equipment. Dan basically said “run until you can’t run any further.” 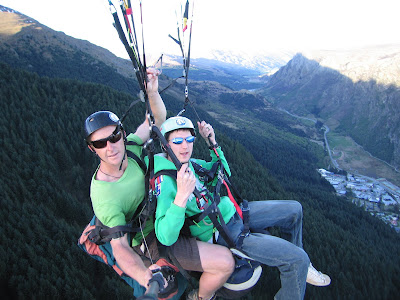 I’m not sure how many seconds it took but we were off and up into the air, gliding down through the forest. There was a cool breeze and I had opted for wearing my fleece top, well actually a T-Shirt would have been OK. 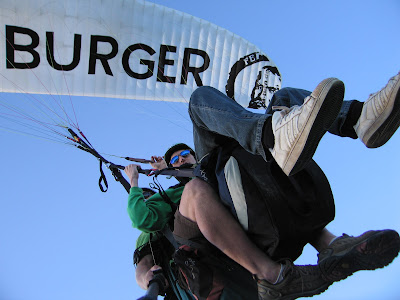 It was so different to the sky dive and bungy jumping I had done before. This wasn’t anywhere near as scary, yet you got just as good a buzz and a view on the way down. Well in a bungy jump you actually don’t get the time to savour the view. 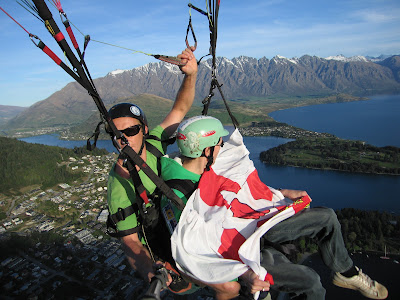 Tonight I had about 10 – 15 minutes before getting to the ground. We landed late afternoon in the playing fields of a children’s primary school. 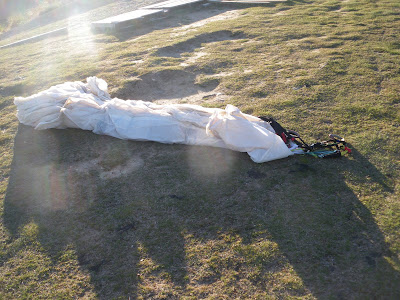 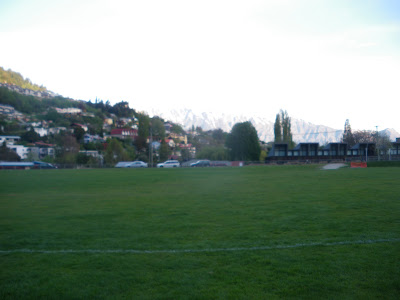 Once at the bottom, Dan sorted out the photos and videos onto a CD for me, packed up the equipment and said “that’s my last one of the day – I’m off down the pub” – that raw Kiwi culture is extreme.
It was a pretty good experience and thanks to Dan I also now had a photo of my Northern Ireland fleg in the air over Queenstown. It was time to collect my bag, then go for a wee drink (I got a free one for doing the Paraglide ) and check out the night life of Queenstown.
What Was It? – Paragliding Over Queenstown
Company – G Force Paragliding
Cost – $169 (included photos and CD)
Who Went – Jonny, Dan


GETTING READY TO PARAGLIDE: