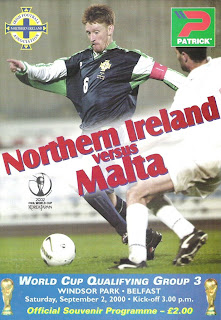 In the year 2000 there was a huge buzz. A new millennium, a new century, people started being able to afford mobile phones, I used the internet, and more importantly I ceased to be a teenager! I was now 20. In that year, I worked for 48 weeks in Tesco at Springhill as a stock control assistant. It was an easy job, a nice local store and the biggest excitement I had in life was going to the pub with my mates and going to watch my country play football. The Northern Ireland team should have been on the eve of a golden age. Inspired by captain Steve Lomas, led up front by new goal hero David Healy, and a choice of two Premiership goalkeepers, Maik Taylor and Roy Carroll. But the truth on the pitch was that we still weren’t world beaters. And so on a sunny September Saturday, with a 3 pm kick off, I headed to Windsor Park. The previous month we had played Yugoslavia for the last time ever (the break up of the state was almost complete), and had led 1-0 thanks to David Healy, before we eventually lost 2-1. For that match, we were in the West Stand (Kop). For the visit of the Maltese there was a nice crowd of us there that day. In was 2nd September 2000, our first qualifier for World Cup 2002 at Windsor Park, and expectations were high. 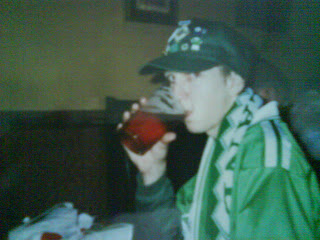 A rare Belfast sun bate down on us that day as we met in The Four In Hand pub on the Lisburn Road for pre-match pints. In those days I used to sell our fanzine outside the Windsor Park gates, but Mike and I gave the fanzine a break for this match, as we had one out the previous month for the Yugoslavia match (Issue 9 of Here We Go…Again: Are you being Serbed?) and would have one out for the next month’s home match with Denmark. So it was a nice change for me. In the pub I remember meeting Dave Smith and Richard Henry, there were some faces from those days that still go to the matches. Those were the hardcore NI fans, those who wore green and white to the matches before the term GAWA was even used. I drank some Bass with Begzi, Mike, Bob and possibly Gavin. I cant remember if Gavin was there or not that day, as he isnt in the two photos I have, but could well have took them. Bob was my English mate from Wakefield in Yorkshire, who used to come to matches with us. He was a strict church going Catholic, and I have to say that was the most pleasing aspect for me, having anyone from Northern Ireland regardless of religion supporting our national team.

After the pints in The Four In Hand (which was possibly my LAST EVER visit to that pub, as it changed owners and became a posh wine bar and restaurant the next year, and is now called Ryans Bar And Grill), we headed into Windsor Park early. I was always well decorated in green. It is my favourite colour anyway, but the fact that Northern Ireland play in green added to that. I had a green and white NI fleg which I made myself, sewed it on to an Ulster Banner fleg and cut out the letters of the town BANGOR on it. That day I put the fleg up in the lower North Stand edge by the corner fleg. On the highlights from the BBC, my fleg got on camera as Damien Johnson swung in a corner. It was a very bad fleg, with cheap material, but in those days it did the job! (Fleg means Flag if you come from Belfast by the way…). At the match also was Brian McClelland and my Dad, Joe Blair, so there would have been either 6 or 7 of us sat together depending on whether or not Gavin was actually there. We sat in the North Stand Lower, near the Railway End. Tickets would have been around £10, a bargain back in those days! 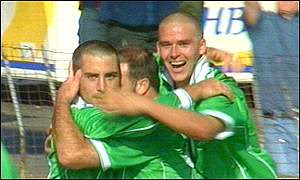 The match kicked off, we had a good team out that day, strangely Sammy McIlroy went for the 4-5-1 tactic, which left little David Healy on his own up front, and a big midfield of Elliott, Lomas, Magilton, Horlock and Johnson. We had actually played Malta away in March in a friendly and beat them 3-0. However this competitive match was proving harder than we thought, with Roy Carroll in nets having to be tested, and Malta’s George Malia missing a totally open net at the Railway End in the first half. They should really have gone 1-0 up at that point and in the fading Belfast sun, we made it to half time at 0-0. For Northern Ireland, we need to be beating teams like Malta, especially at home. It was in front of only 8,000 fans. Funny that! Nowadays we get all sorts of hangers on, glory hunters and new fans, who back in those days probably all supported England or Republic of Ireland. 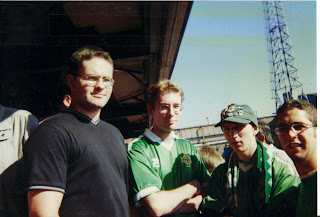 The second half was a struggle, but the longer the match went on, we knew that a single chance would nick it 1-0. Malta were not a threat to us in the second half, and attack after attack we couldn’t score. Then 32 year old sub and veteran Phil Gray came on as sub. Suddenly after 70 minutes, Gray tapped the ball in from a Horlock touch on a Magilton cross. It was a nice easy finish and we celebrated well. After that Horlock almost grabbed a second but we had done enough. We had played one, won one, had 3 points and had not conceded a goal. It was a nice win, even if 1-0 wasn’t that impressive. Phil Gray is one of very few players who scored for us in the 1990s and in the 2000s. Others I can think of Phil Mulryne and Steve Lomas. A nice goal and a great win.

The above photo…whatever happened to the likely lads?:
From left:

Bob, from Wakefield – my English mate Bob used to be nuts on NI, a Barnsley fan and he attended and even helped sell some of the fanzine issues in the 2000-2002 era. He’s an Irish Catholic actually with an English accent, and got a mention in a few of the old fanzines. I’ve seen him once in the last 4.5 years, at his 30th birthday which I made it to by total chance being in Belfast that night.

Me – Still going to every home match, the odd away match, the odd under 21 match, running a NISC in the SOE and doing the odd media press release and interview for BBC and IFA etc…”Dont ever change”

Mike – Was at the Yugoslavia home match in 1990 with me (my first match) and I continued to go to NI and Glentoran matches with Mike all through the last 18 years. Mike’s block booking is currently next to mine, so I still see him about 5 times a year. Mike lives off the Ravenhill Road in Belfast and sadly I didnt see him at the Hungary/Magyarorszag match in November 2008 as he had to work in London that week and couldn’t make the match.

I love nostalgia and looking at old photos. WE bate Malta 1-0 that day and that photo was took in the North Stand Lower!