“Close your eyes. Clear your heart. Cut the cord” – The Killers. 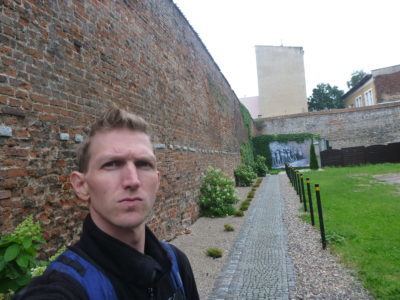 My Poignant Visit to the Polish Post Office in Gdańsk: Where World War II Began

Life continues to provide us with ups and downs on the journey. Moments of high elation and happiness and moments that remind us of the bad times that people on this planet had to endure in the horrors of yesteryear. I feel the need to visit parts of the world that have a truly horrific history to them, to get to the bottom of things, to stop and pray for a while, to thank God for the good times. This was a truly poignant visit to the Polish Post Office in Gdańsk. 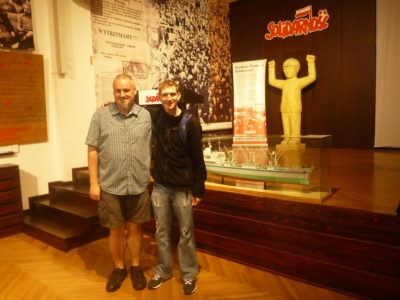 I am based here for the time being. I am studying Polish at Learn Polish in Gdańsk and I am staying at the Hostel Cycle On. I have toured the nearby area on bicycle with Mika on the Road as well as doing a Food Tour in the northern city of Gydnia. But not everything here has a happy past and it’s important to remember this. Gdańsk has a lot of history to take in. It’s been Polish, Russian, German, a free city, Napoleonic in its coloured history. This was yet another journey to add to that back catalogue of horrors. 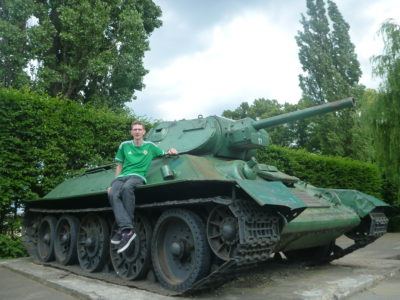 In July 2016, I visited one of the three places where people say the Second World War began. Incidentally the other two places, the Bridge in Tczew and Westerplatte, I have also visited. You can do it alone of course, and I have done, but as I often do and recommend, try and take advantage of FREE TOURS when you are a cheap ass backpacker to a new city. I teamed up with Free Tours Gdańsk on a 3 hour walking tour. Here are the times they do the tours: 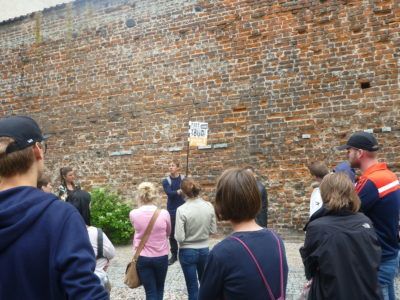 On a Free Tour in Gdańsk

The free tour was excellent and featured many cool backpacking sights too, such as the ex prison, the Town Hall, the main street in the Old Town Ulica Długa, which was destroyed during the Second World War. But I wanted to see for myself the sad place where Hitler’s Nazis came on a horrific night for mankind back in the late 1930s. The final stop on the Free Walking Tour is the Post Office in Gdańsk. Here is a bit of background on what happened. 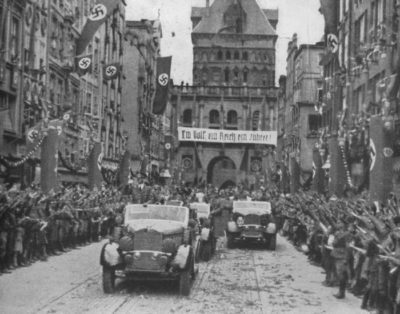 Hitler’s Nazis on Ulica Długa in Gdańsk, Poland in the 1930s 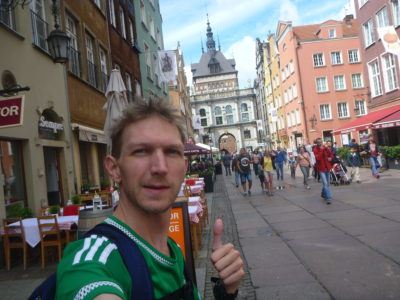 How The Second World War Began, in Gdańsk, POLAND
At just after 04:45 a.m., local time on September 1, 1939, as the Germans launched their attack on Westerplatte and WWII officially began, another ferocious assault was just beginning at the small post office in the city’s then-called Hevelius Square. 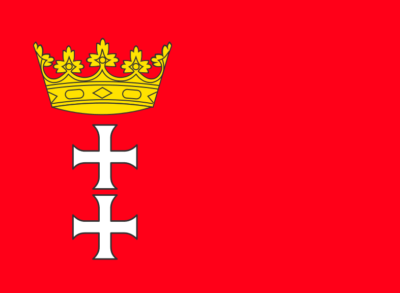 You see, Hitler felt at home in “the Free City of Danzig”, as this place was once known. It was another Wacaday Autonomous region I can add to my travel repertoire in fact. From 1920 to 1939, the area was a free city. It was neither Polish, nor German. Yet in essence it was both. But basically the Germans suffered badly (rightly so) at the end of World War I when the Treaty of Versailles decimated their land ownership and the League of Nations was formed. The League of Nations preceded United Nations. All of this sort of stuff, I learnt as a student at Newtownards Tech back in the day. Hitler wanted “Lebensraum” at any price. 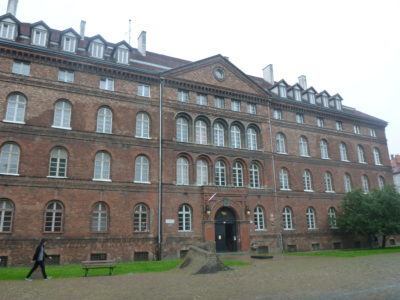 I also have to note here, that the nearby town of Tczew is also where most people claim the Second World War began, as about 11 minutes earlier on the same day, 1st September 1939, a German Nazi attack was thwarted on the famous Most Tczewskie (Tczew Bridge). I included a report of my trip here in my backpacking sights in Tczew.

So what happened on that fateful night in 1939?
Here in Gdańsk at the Polish Post Office, German Nazis came to take over in a siege to oust the 53 Polish post office workers inside. During the attack, 13 of them were killed by the Nazis, one of them was killed by a flame thrower when fleeing the building. The survivors were pushed up against a wall, and later sentenced to an unfair death for “treason” by the Nazis. 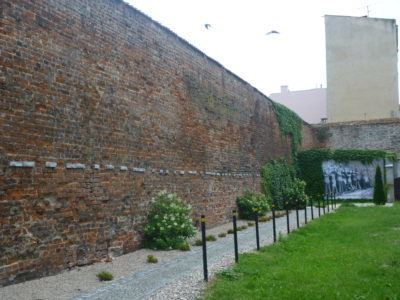 The wall where the workers were forced to line up at

The entire siege meant that Hitler had now illegally invaded Poland, taken over an innocent Post Office and declared that  Gdańsk was a Nazi city. When news filtered to the League of Nations, it was time to act and so, World War II began. On October 2nd, the surviving postal workers were sentenced to death and subsequently shot a few weeks later, for crimes they didn’t commit. Oddly, their bodies were only discovered in Zaspa Cemetery in 1991, after the fall of communism. 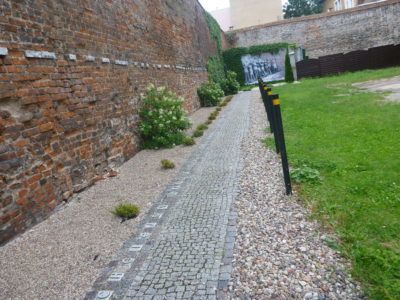 What is there to see these days at this Post Office?
The Post Office is still a fully functional one. Nothing has changed for the building itself. However, the gardens in behind are a drab and sad reminder of what happened. The Nazis took photographs of the attack and one of these is on the wall as a mural. 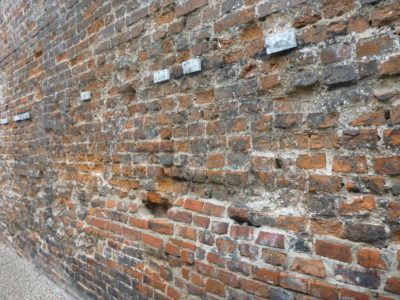 Hand print plaques on the wall 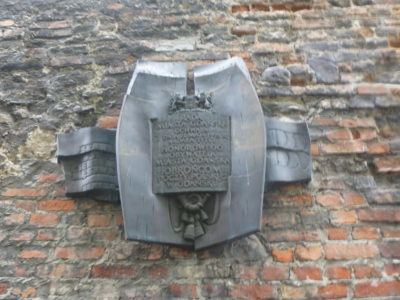 A plaque on the wall

The brick wall at the back has silver plaques with handprints on them dedicated to those brave workers who were later wrongfully murdered by the Nazis. 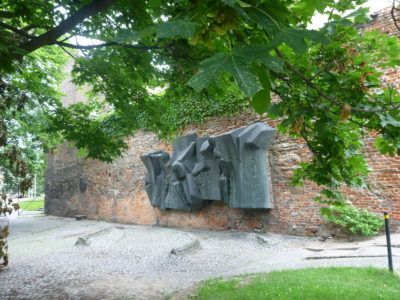 A monument dedicated to the victims 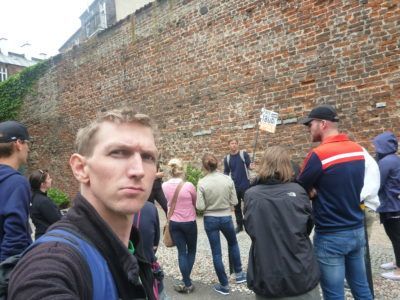 There are also two commemorative monuments to the attacks in the grounds of the Post office. I have done my best to write about what happened here, there are conflicting stories on line and this information mostly came from my tour guide. It was a sad day on my travels, but I’m glad I came here to see it and ponder what should never have been. 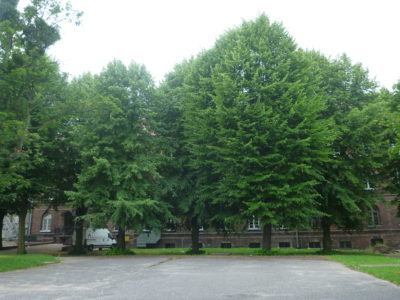 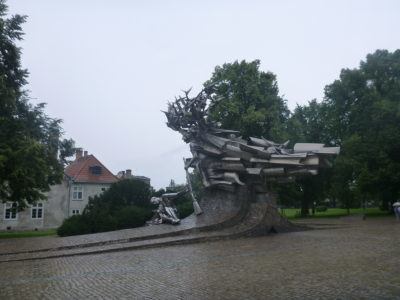 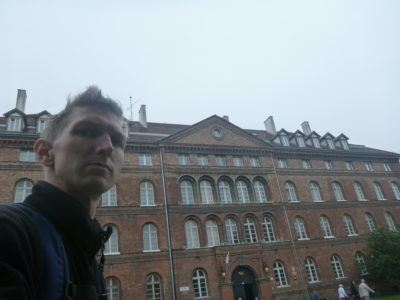 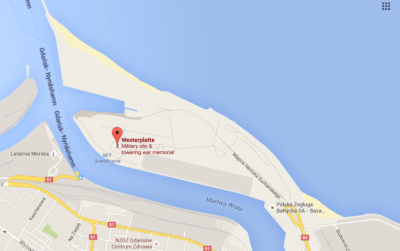 Poland is a wonderful country, it warms to me every single time and I feel so sad about the history that this proud nation has been through. Here are some videos from my tour in Gdańsk:

14 thoughts on “My Poignant Visit to the Polish Post Office in Gdańsk: Where World War II Began”