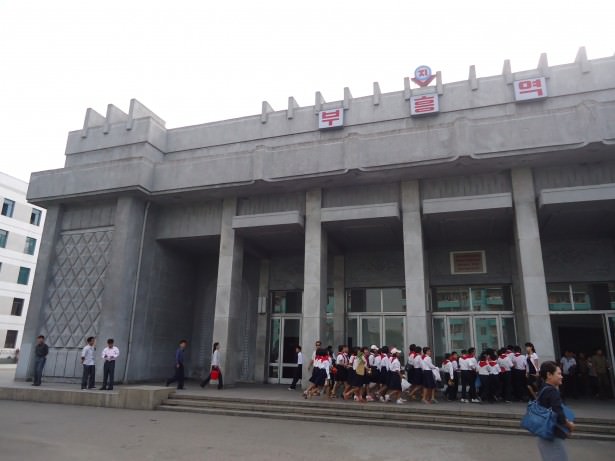 Riding on the Pyongyang Metro System is oddly a highlight from your visit to North Korea’s lively capital city. Forget the busy London tubes, the old grubby New York Subway and the soul-less Shanghai Metro, this is Pyongyang – and it has a Metro System like nowhere else on earth. Here are some facts I dug up on the “Pyongy Metro” (yes as a nomadic Northern Irishman I nicknamed the city “Pyongy”). 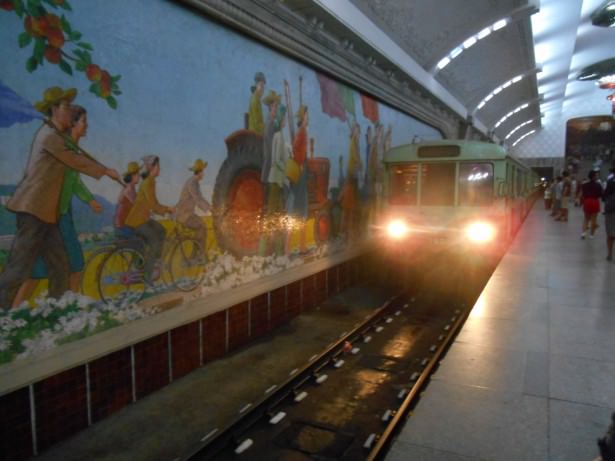 1. Pyongyang Metro is the deepest metro system in the world (110 metres underground).

2. Pyongyang Metro uses old East German trains, some of which still have German writing on them.

3. Pyongyang Metro has 2 lines (known as the Chollima Line and the Hyoksin Line).

4.A ticket for the metro costs 5 North Korean Won, at less than one US cent this is surely the cheapest metro system in the world.

5. The stations all have names related to North Korean history and culture (like Glory, Revival, Red Star, Victory, Reunificaion etc.). 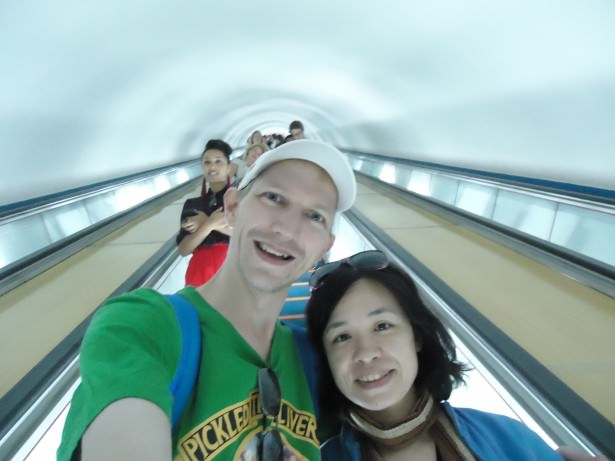 On the way down into Revival metro – the world’s deepest metro system!

6. The station names are not really related to the part of Pyongyang they are in.

7. Each Metro station has a free toilet in it.

8. The Pyongyang Metro is completely underground – no stations above ground level.

9. The metro stations are all designed to act as bomb shelters if need be. 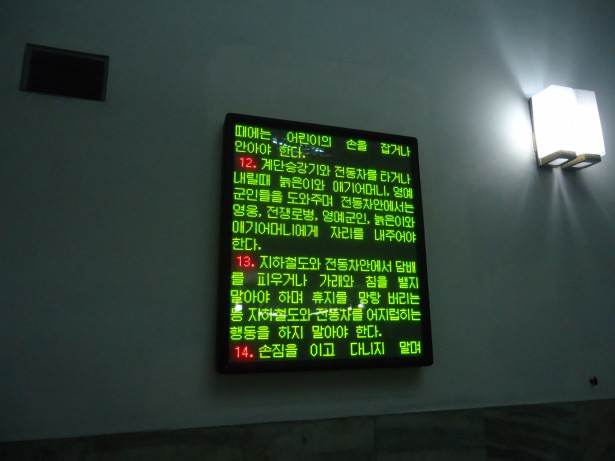 Local information board in Revival Station.

So how do you get a ticket for the Pyongyang Metro?

OK, these days, North Korea is a country that requires to be visited on a guided tour, such are the restrictions placed on backpackers like you and me. So get a tour booked with Young Pioneer Tours, easily the best and cheapest North Korean tour operator. As a bonus, book your tour quoting my website Don’t Stop Living and you’ll get an extra 5% off! 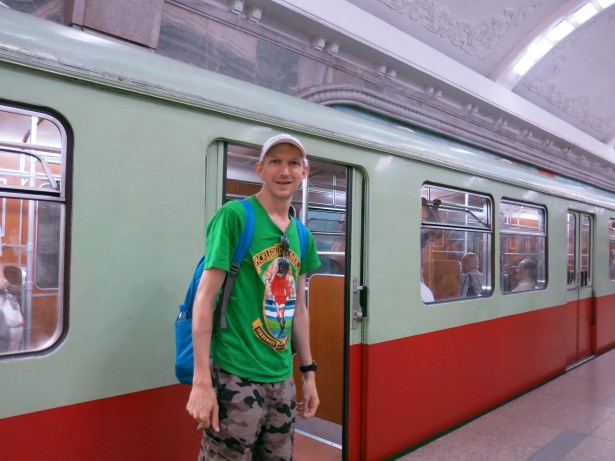 Ready to board. A lot less busy than the tubes of London, Sydney and Hong Kong!

Once you arrive in North Korea most of the tour will be planned in advance, almost all tours will allow you to visit the Pyongyang metro. Ask your tour guides if you need to. I totally recommend it and to be honest your visit to Pyongyang will be missing something if you miss it. 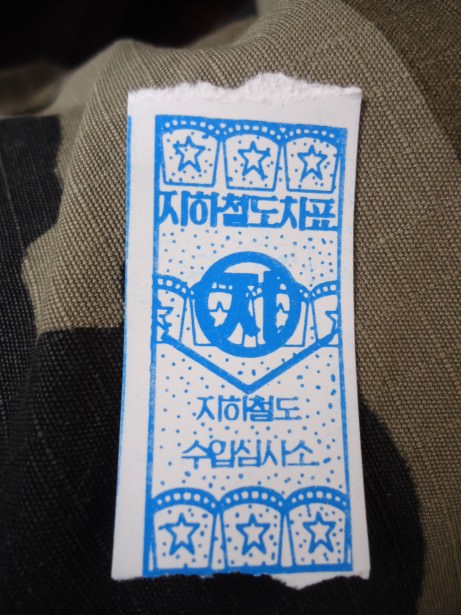 A ticket for the metro in Pyongyang – this costs 5 North Korean Won. A few cents!!

In terms of getting a ticket for the Pyongyang Metro, you don’t use cash or credit cards. Foreigners are actually exempt, since your tour covers it. You walk through the turnstiles as normal and you are given a cardboard ticket which serves more as a memory than being an actual ticket they check. Nothing is checked. 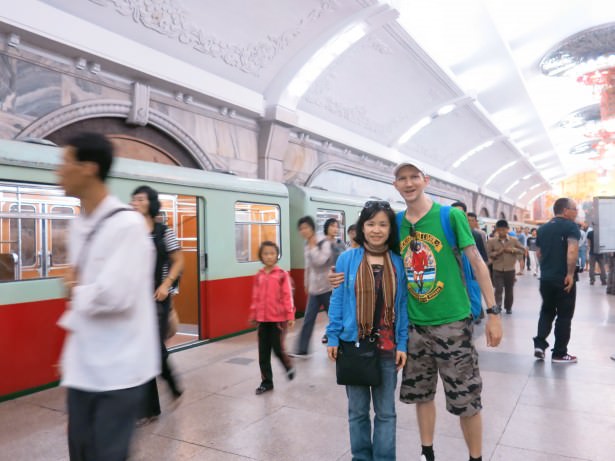 My girlfriend and I at Revival Station on the Pyongyang Metro.

How much does it cost to ride on the Pyongyang Metro?

Currently a single one way ride costs 5 North Korean Won. This is ridiculously cheap. Less than 1 US cent. That information was provided by one of our guides by the way, I wouldn’t completely take it as gospel! 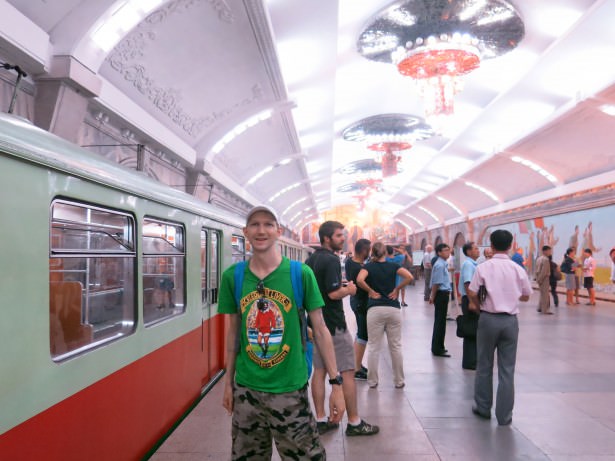 When is the Pyongyang Metro open?

It’s not entirely clear, but the entire city is pretty much dead by dusk, so assume it to be 9am – 6pm. If you get a ride on the Pyongyang Metro after 6pm let me know please! 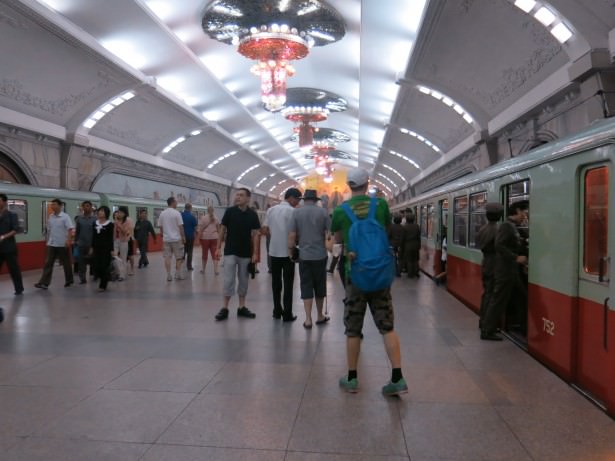 Spot the backpacker in Pyongyang Metro – actually there were a few of us!

What stations can foreigners visit?

In theory you could probably visit all of them, though it’s noted that this is not normally the case. Most tourists are accompanied on a route encompassing just two of the stations, and at a maximum of six of them. I was on the most frequent route from Revival/Revitalisation to Glory. There were no stops in between. 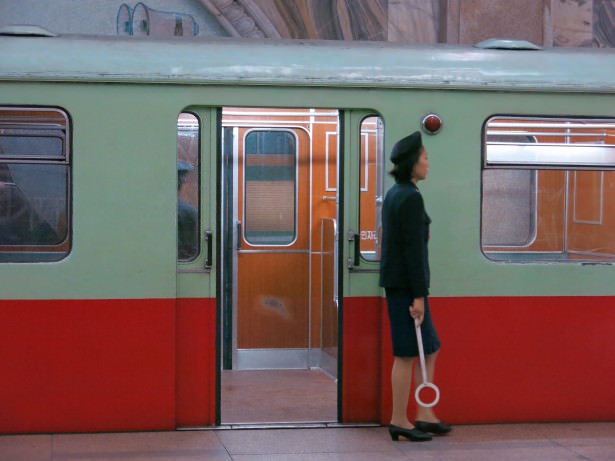 One of the metro ladies in Pyongyang.

What stations did I visit?

We boarded the Pyongyang Metro at Revival and exited at Glory. These stations are known locally as Puhung and Yonggwang. 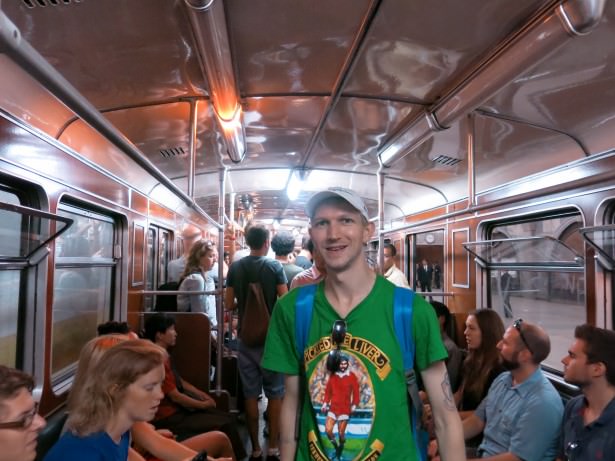 On board the Pyongyang Metro. Loving it!

How frequent are the trains on the Pyongyang Metro?

Fairly frequent – they occur every few minutes and are pretty fast and efficient. 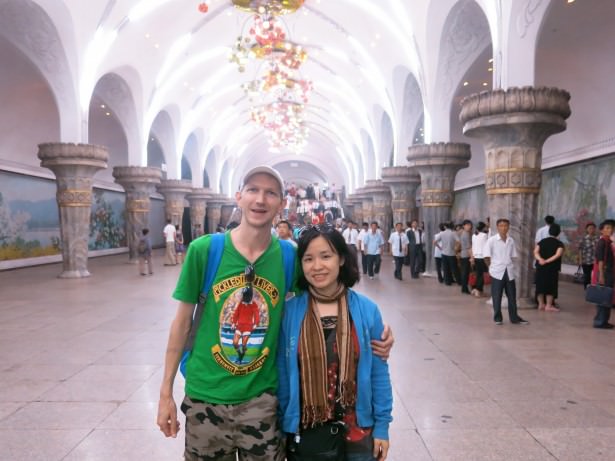 At Glory Station on the Pyongyang Metro system, North Korea.

How many stations are there on the Pyongyang Metro System?

There are two lines and a total of 17 stations, these are: 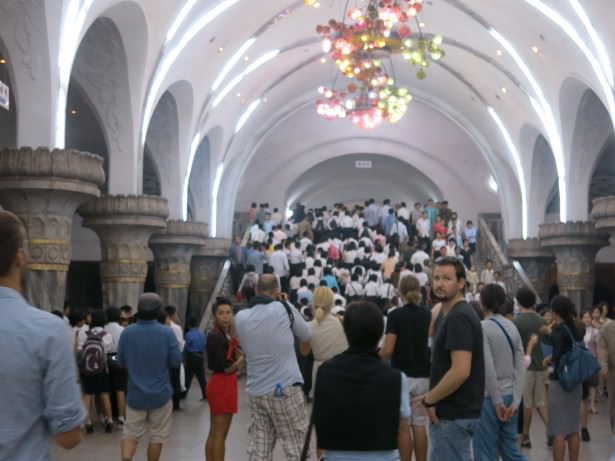 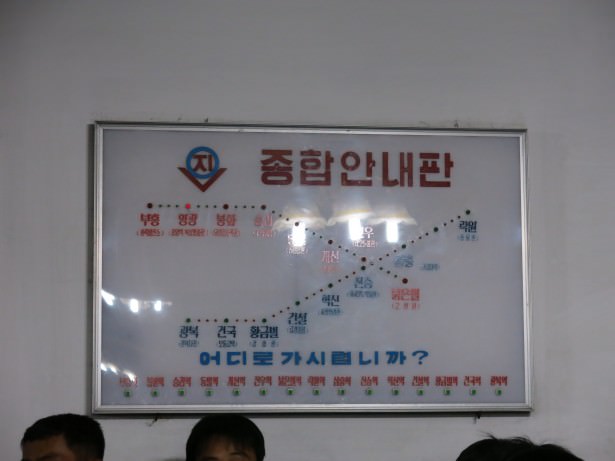 The two lines on the Pyongyang metro system in North Korea’s capital city.

Any truth in the rumour that it’s all a “big fake”?

I honestly don’t believe all this crap about the Pyongyang Metro being fake. People in North Korea are undoubtedly under the impression that their regime is the best in the world and that the USA could invade any time. So they are a proud and together nation. Everyday normal local people use the Pyongyang Metro. It’s a hell of a trick if it’s fake – it’s been going for years!! 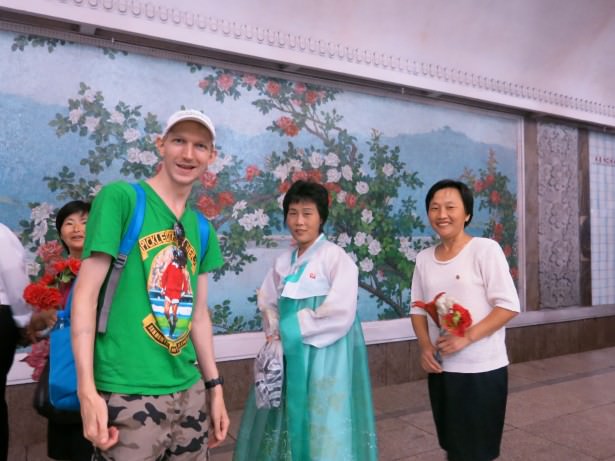 I started talking to a load of locals at Glory Metro Station – they got a bit shy!

You can stop and chat to the people all you want. If you speak Korean then you’ll even be able to have a decent conversation with them. 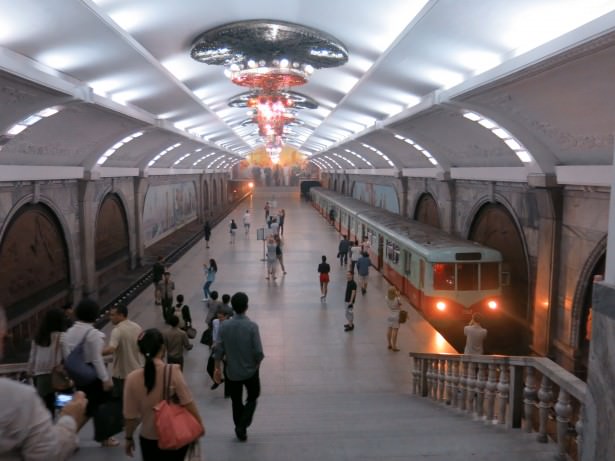 Are the passengers real or fake?

Oh come on – these are REAL people. I understand people have their pre conceptions and have suspicions that this is fake and that the passengers are all actors. If you ask me such rumours are a load of shit and often bad journalism from buck eejits who don’t travel. Yes, all the lines and stations on the Pyongyang Metro may not be complete or fully operational, but the people aren’t robots. They are humans like you and me. 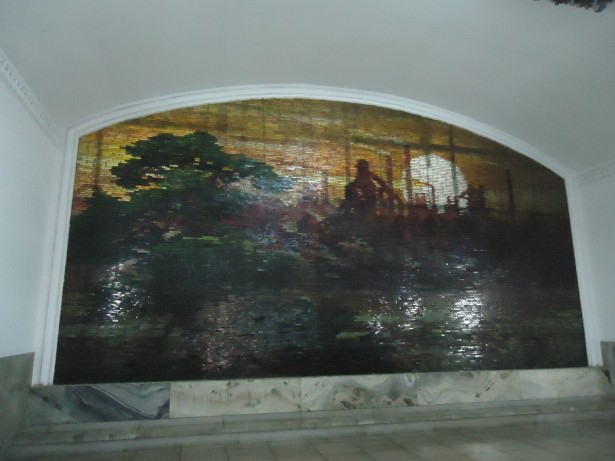 What’s cool about the Pyongy Metro?

Apart from being the deepest in the world, it is a work of art. Murals line the walls, it’s squeaky clean (as is all of Pyongyang). Every day the daily newspaper is placed in boards for the locals to read. The trains are old school – they came from East Germany so no poncy modern stuff here. Pyongy does it well. 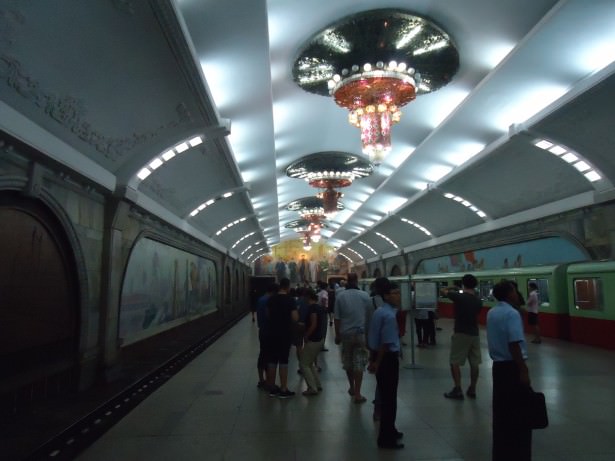 The platform in Revival Station in Pyongyang, North Korea.

What can you not do in Pyongy Metro?

– Don’t take photos of the tunnels – this was the only photo restriction in the metro and the only time I was told to delete a photo in North Korea
– Smoke
– Drink (I did have some water, which is okay bt generally try and refrain from it)
– Eat
– There are a few other restrictions but not much different from any other metro in the world. 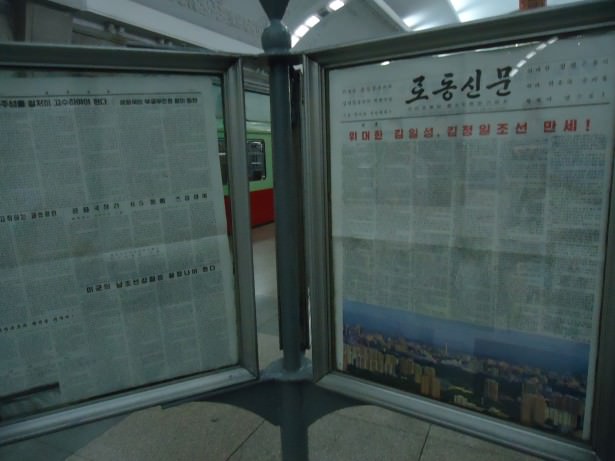 Daily newspapers in the Pyongyang Metro.

Is the Pyongyang Metro safe?

Yes. VERY safe, as is Pyongyang. North Korea is one of the safest countries I’ve ever been to. You don’t even have to look out for pickpockets. 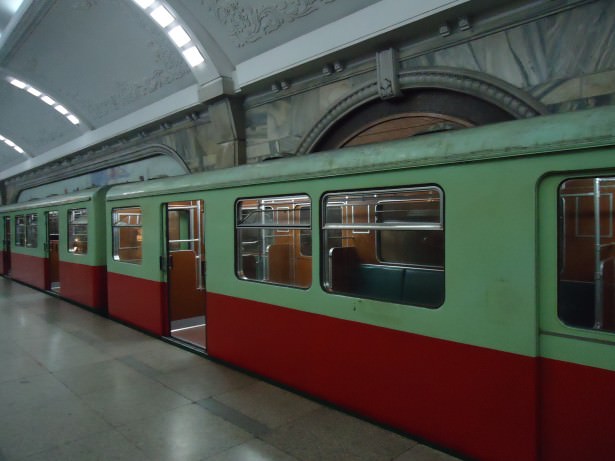 These trains came from East Germany.

Some other Metro Systems in the World I remember using on my travels: 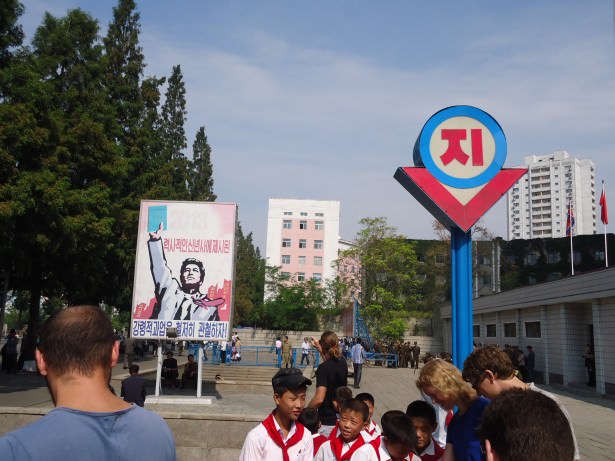 Outside Glory Metro Station in Pyongyang.

We all know what the London Underground Logo looks like, here’s the Pyongyang one: 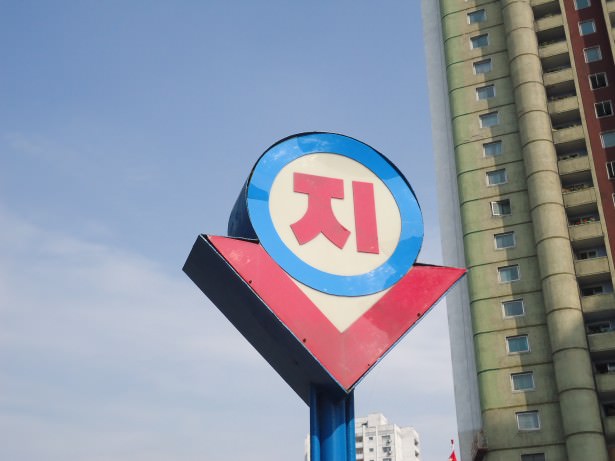 The North Korean Metro sign – not quite as famous as the London Tube. 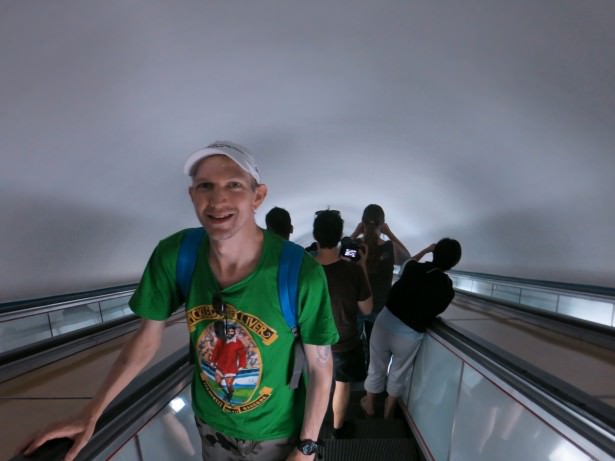 Going down to the platform.

A big coincidence for me on the Pyongyang Metro

I almost couldn’t believe it – while standing in the middle of Revival station, a guy taps me on the shoulder and asks if I’m from Northern Ireland. It’s a fellow traveller who had seen me in the Yanggakdo Hotel wearing a Northern Ireland football shirt! He was Alan from Scotland who lives in Larne!! Small world?? Yes – because he went to my mate’s wedding. My mate El from Larne who I went drinking with in Weymouth a few times back in the time when I was based in Bournemouth! 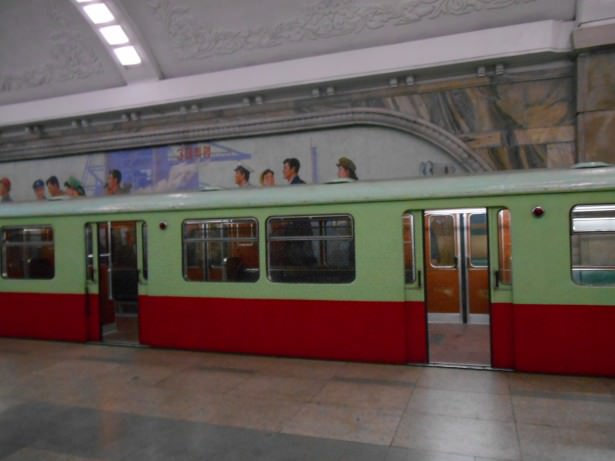 One of the Pyongyang Metro trains.

So that’s my take on riding on the Pyongyang Metro – I loved it and you should try and ensure it’s on your itinerary for your trip to North Korea. I dare say it will be a few years before hoardes of backpackers crowd the trains on a hostel night out looking for the nearest pub. On route they might even buy the Pyongyang equivalent of an Oyster (London) or and Octopus (Hong Kong) metro card. Don’t hold your breath. You’ll enjoy this ride though, that’s for sure. 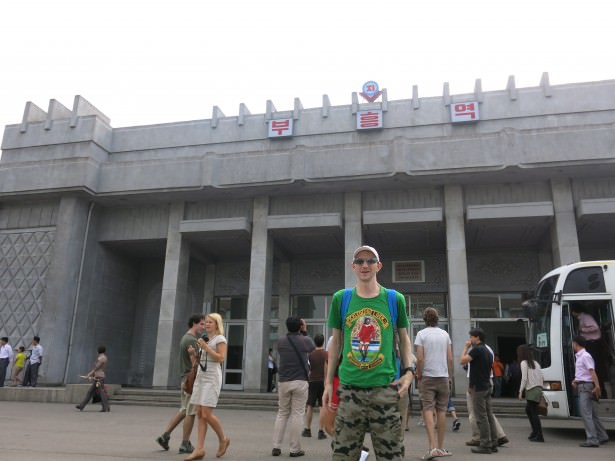 Outside Revival Metro Station in Pyongyang, also known as Revitalisation. 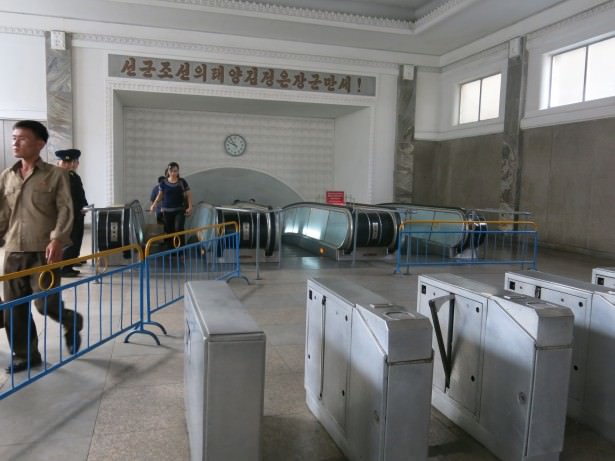 The entrance to Revival/Revitalisation Metro Station in Pyongyang, North Korea.

Here are some videos I made in the Pyongyang Metro system:

8 thoughts on “Revival to Glory: Riding on the Pyongyang Metro, North Korea”