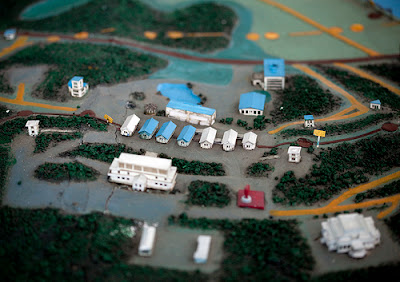 ** STOP PRESS ** since this article I’ve been properly to North Korea, including a visit to Kaesong and the North part of the DMZ. You can get a cool 5% off through my website too when you book with Young Pioneer Yours.

With any tours, there are of course some things that can be missed out. Our tour of the DMZ was truly excellent and I loved every minute of it. We got a lot out of it. However, we missed out on getting into the Dora Observatory. Basically a viewing platform on the Dora Mountain in South Korea which allows you some great views over the border into North Korea. So I felt it was only right to comment on what we missed, how excited we were on the trip and interestingly those other parts of North Korea that we are now totally aching to see. We want to go and see North Korea properly. It truly is the world’s last enigma, the one hidden nation. 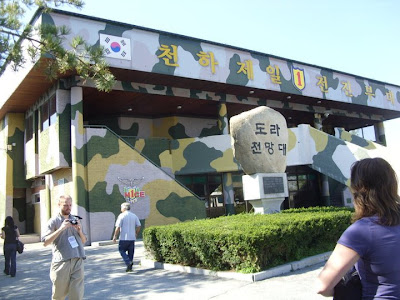 This building is the Dora Observatory. Due to the death of Kim Jong Il, it was closed the week we were there. Which was a shame as this would have been included in the tour, not an extra. 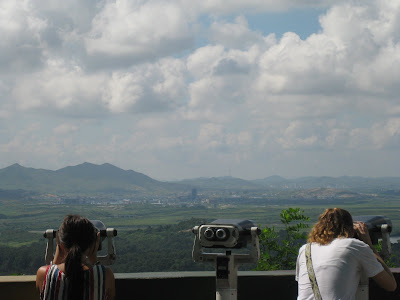 The Dora Observatory offers much better views of North Korea than the view we got near Panmunjom, due to its elevation and position on the Dora Mountain. You can also look through telescopes and spy into the North Korean village of Kijong-dong. Kijong-dong is basically just a fake village however and nobody lives there, they call it a propaganda village. 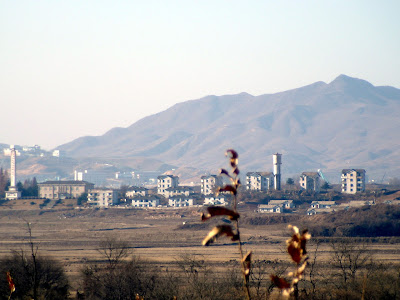 The North Korean village of Kijong-dong viewed from the Dora Observatory. The city is uninhabited with many claiming that the buildings are entirely empty and without windows. more information on Kijong-dong here: http://en.wikipedia.org/wiki/Kij%C5%8Fng-dong 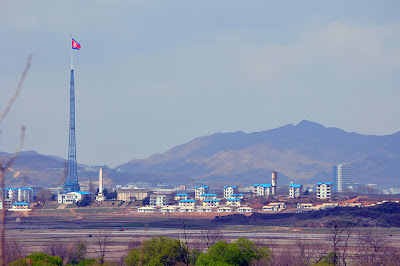 Another photo of the large North Korean flag and the village of Kijong-dong. I am not sure if the sky blue rooves in this photo are real. It’s funny though as these type of buildings remind me of those I saw in Guangzhou in China from my flight in, see the photo below… 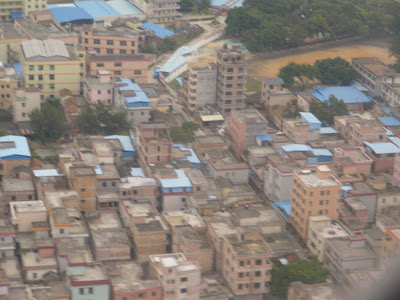 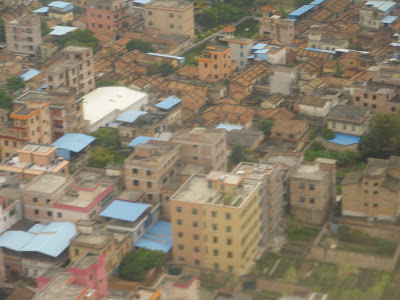 The above two photos (the only two that are mine in this report) are both of the city of Guangzhou in the Guangdong province of China. A large city used predominantly to house factories supplying goods to the rest of the world. 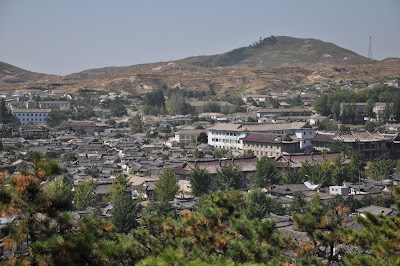 This is a photo I found online of the North Korean city of Kaesong. Kaesong is not inside the DMZ but is the nearest North Korean city to the border: http://en.wikipedia.org/wiki/Kaesong
Just being on the DMZ Tour has made me absolutely intrigued and obsessed with North Korea ever since ahead of my trip backpacking in Pyongyang. 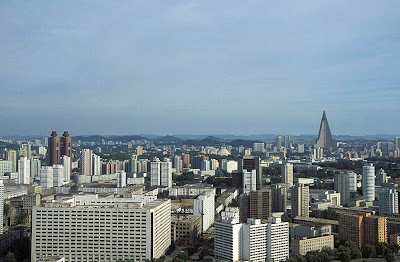 While the DMZ Tour only allows us to learn a bit of the history of the divide, it serves as an excellent introduction to the two countries. The DMZ Tour can be organised by many companies in South Korean, mostly in Seoul. It is easy and safe to organise and comes with little or no risk. It allows you to step into North Korea at the border and witness how sad this divide actually is. North Korea is basically a country closed off to the outside world. To really understand North Korea would be to go there properly, and you cannot enter North Korea properly from South Korea. Tour companies in China can organise the trip and that is exactly what Panny and I did with Young Pioneer tours. The above photo shows Pyongyang in its glory, the incredible capital city of North Korea. 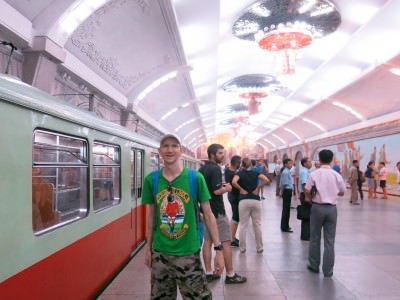 This is the metro system in Pyongyang. It doesn’t look too dissimilar to the metro system used in Moscow with its decor. However this one is the world’s deepest and it doubles up as a shelter. Although there are many stations on the line, rumour has it that only two stations are properly in full time use, and as a tourist to Pyongyang you are told which way you should go. 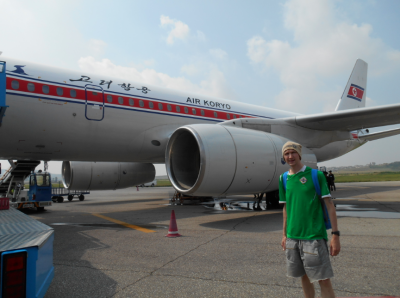 I flew into Pyongyang Airport. So intriguing – Kim Jong Il right at the top of it. Can you imagine a picture of David Cameron or The Queen at Heathrow or Leeds-Bradford Airports? 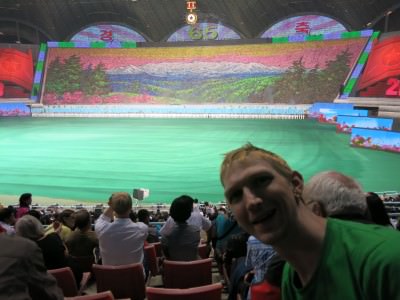 North Korea is all about the military and massive showmanship. The Mass Games held once a year are meant to be one of the most exciting shows on planet earth. You can find a lot of videos and photos of it on my YouTube page. 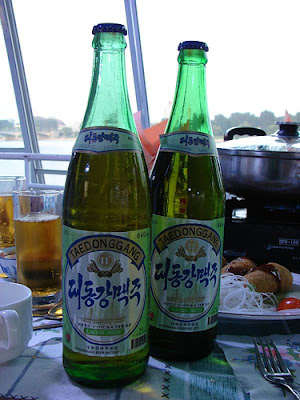 I managed to pick up a gorgeous bottle of allegedly authentic North Korean Blueberry Wine on my trip. What I didn’t manage to get was a North Korean Beer. So that one had to wait until I was out in the best bars in Pyongyang relaxing in Pyongyang before I burst open a bottle of Taedonggang (the North Korean local beer). 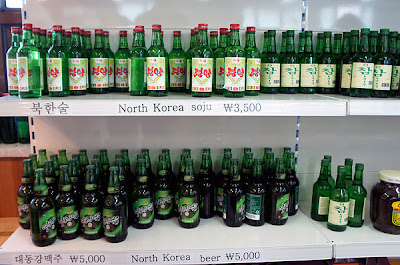 North Korean Soju and Beer. These are or were available inside the DMZ and in North Korea of course in shops and in the Yanggakdo Hotel, and we did have about 3 or 4 shop stops on the DMZ, notably at Imjingak. 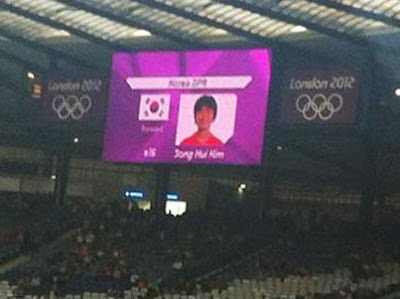 The flag confusion caused a real stir in London this year in 2012, when a South Korean flag was shown by mistake instead of a North Korean one for a women’s Olympic Football match. That is one mistake that should never be made. 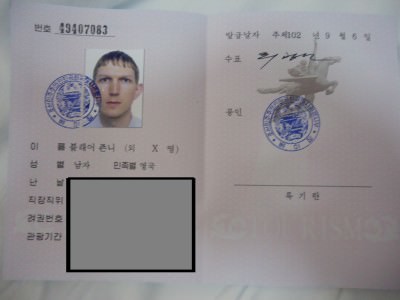 What a North Korean visa looks like. On the South Korean DMZ tour, I got my fake exit stamp from Dorasan Station in South Korea only. 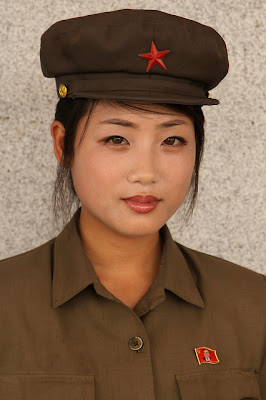 Apparently North Korean girls are the prettiest out of the two nationalities. Judging by this photo and a quick google search, I’d say that’s right. Girls in army uniform, and ones not to be messed with either. 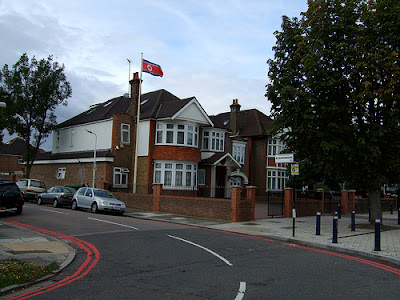 As this post is just me basically intrigued by North Korea, I’m including a few random things I found online, above apparently is the North Korean Embassy in the UK. Not sure I believe that one! 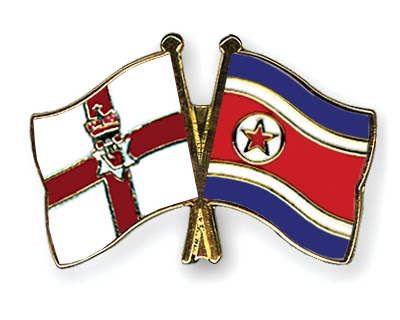 This interestingly, is a pin badge which is available featuring the flag of my country Northern Ireland and the flag of North Korea. I’d estimate that the similarities between the two end on the word Northern/North. A random website has a question on it here: http://uk.answers.yahoo.com/question/index?qid=20120311085643AAsXhj7  ) 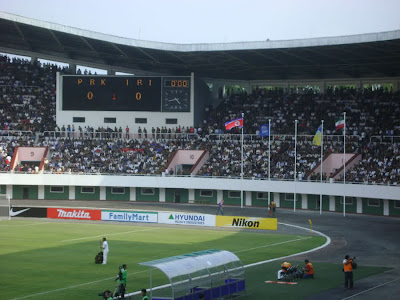 North Korea qualified for the last World Cup (South Africa 2010) and a few photos of it were posted by a Northern Irishman who got access to and attended some of their qualifying matches. I haven’t met him, but he has some pretty good stories and has posted these photos on popular Northern Ireland football fans website “Our Wee Country”. 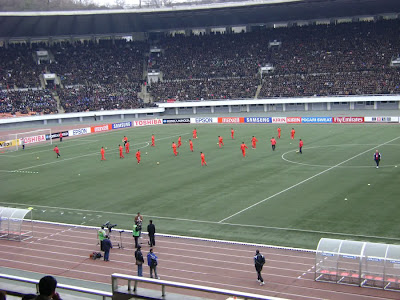 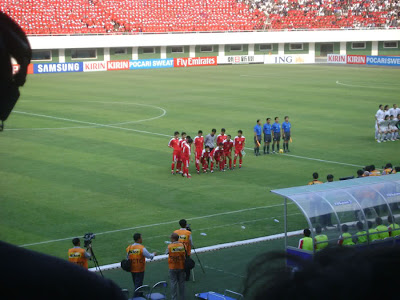 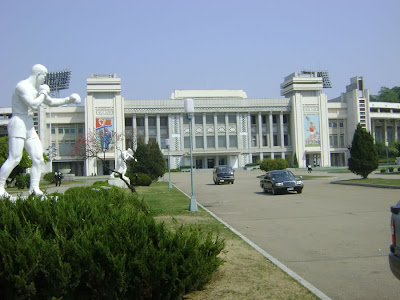 Outside the Kim Il Sung Stadium in Pyongyang, North Korea. 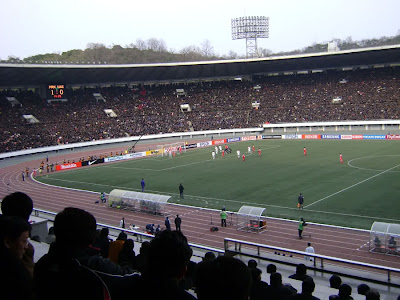 North Korea against UAE in Pyongyang. 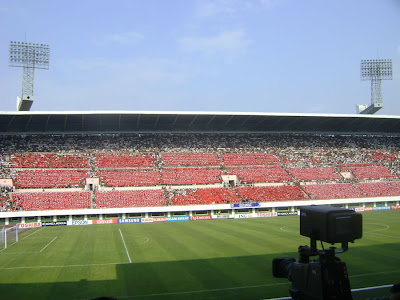 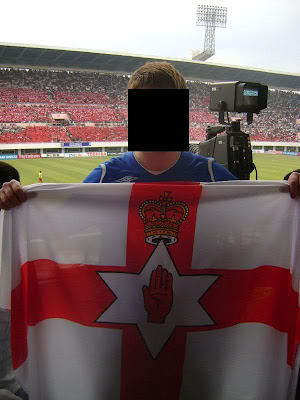 A photo of the Northern Ireland flag in Pyongyang at North Korea’s National Stadium during a World Cup 2010 Qualifier. Obviously the face has been obscured for security reasons, but I’d love to meet this dude whose name is Chris. I also took lots of photos of my Northern Ireland flag in Pyongyang but didn’t make it to a live football match.
On a final note, North Korea ended up losing all three matches at the 2010 World Cup including an embarrassing 7-0 defeat to Portugal. However they are now currently unofficial World Champions based on the “boxing match scenario system”: http://www.ufwc.co.uk/  and http://www.ufwc.co.uk/2011/11/north-korea-unofficial-football-world-champions/
So the DMZ flavour gave me a taste of North Korea and an absolute craving to go there and see it.
SOME VIDEOS OF NORTH KOREA:
PYONGYANG METRO SYSTEM:
PYONGYANG AIRPORT:
A PYONGYANG HOTEL ROOM:
STREETS OF PYONGYANG:
Join 15,017 Monthly Readers! If you enjoyed this article and LOVE travel and SAVING money, get e-mail updates from Don’t Stop Living – a lifestyle of travel! (It’s Free) 😉 Jonny

2 thoughts on “DMZ Tour Part 10: The Bits We Missed And My Fascination For North Korea”