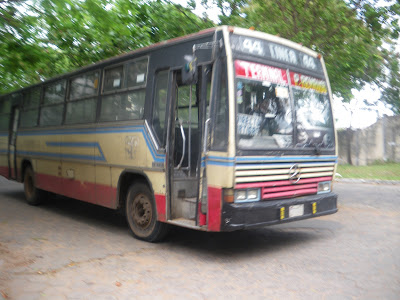 This is not my exact bus that I boarded to leave behind the city of Asuncion, as I had no time to take a photo of that. But this is what it looked like! It was a very quick process and despite being rushed for time, my departure from Paraguay came with a delay. 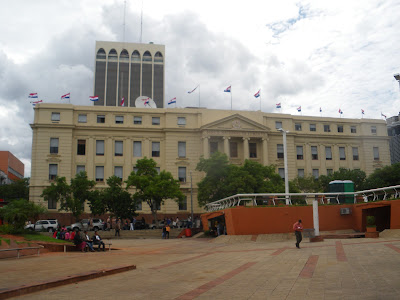 It was around 6pm when I went with Gregory, my mate for two days to wait on my airport bus. Asuncion is NOT a popular tourist spot and even getting the airport bus from the city centre of Asuncion could have proved difficult, which I found out. We got to the right bus stop, just about 3 streets west of the hostel, near Heroes Square. Gregory had come to say bye and also to make sure I was on the right bus, I never doubted myself yet a comedy moment was to come! 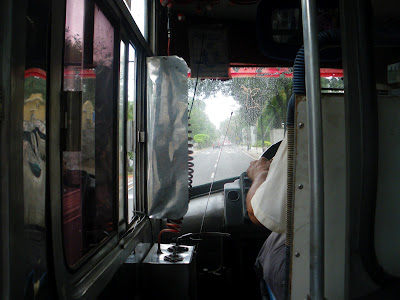 We learned from the hostel (and from my book) that a number 30 bus would take me to the airport from just behind Heroes Square. Yet Lilia from the hostel had also said to be careful as NOT ALL of the number 30 buses actually go to the airport so to check first. After 20 minutes of waiting a number 30 bus arrives, I walk on board and pay and bid farewell to Gregory. Then a customer sees my large bags and gets the driver just to check I’m heading to the airport. Gregory and I have said goodbye and he has gone back to the hostel by this point. Yet I now realise I’m on the wrong bus. Paraguay was a helpful place to be as the driver drove about 2 yards then stopped, refunded me and told me to get the next Number 30 bus only if it also said “Aeropuerto” on it. Easy then, I should have known – I just assumed the buses wouldn’t say “Aeropuerto” on them. 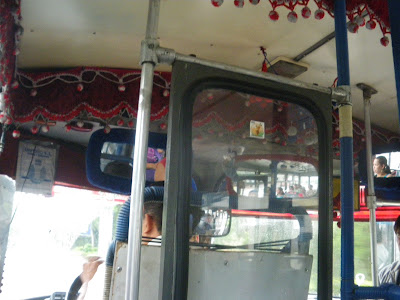 Alas 10 minutes later I got on, even got a seat, crushed my bags in and was on the correct bus for the airport. The airport is not in Asuncion but it is in Luque, another city, but which strings into Asuncion such is the outward stretch of this capital. This bus was heading for Luque the city, I would need to be on the lookout for my stop. In normal cities, an airport bus (or a bus heading to the airport) will have many customers actually going to the airport on board, and even an airport stop. Not in Asuncion, this is not a normal city! 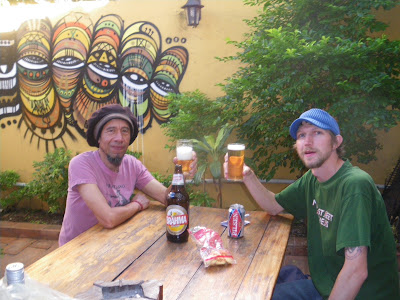 Just before this a great couple of days with Gregory was ended with us sharing a Brahma and a Pilsen beer at the hostel. I tried 5 different beers in Paraguay, and loved them all. 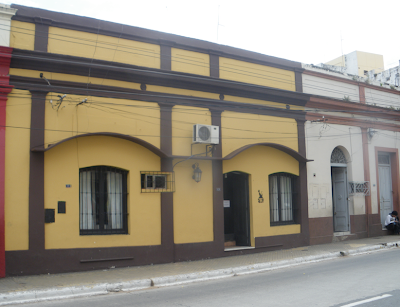 The yellow and brown building was The Black Cat! Excellent hostel where I stayed. More here: http://jonnyscottblair.blogspot.hk/2011/01/black-cat-el-gato-negro.html 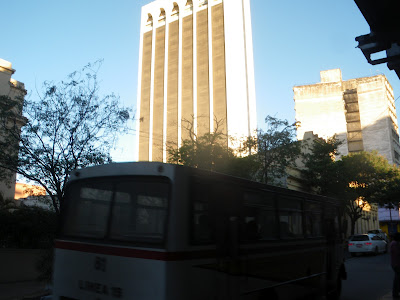 This is the exact spot where I got my bus from. The bus was small like the one above and the one in the first photo and was rammed. As we rolled our way out of the wonderful city of Asuncion, the bus got crushed and I was literally hemmed in. The bus cost 2,500 Guaranis. That’s about 45 US cents or less than 40 pence in Sterling! Paraguay was cheap and I was also a millionaire there (for less than 200 pounds it wouldn’t be difficult). As my bus veered away from the city centre itself, I knew I hadn’t booked enough time there, one and a half rushed days was too short. Asuncion was a splendid city and I also knew it would be a long time until I go back there. But I was Bolivia bound with a flight to Santa Cruz de la Sierra on Aerosur. I also stupidly assumed that my bus was direct to the airport and would be full of others going to the airport and also that the airport would be the last stop. None of those were correct of course – the infinite joys of travelling in Paraguay. 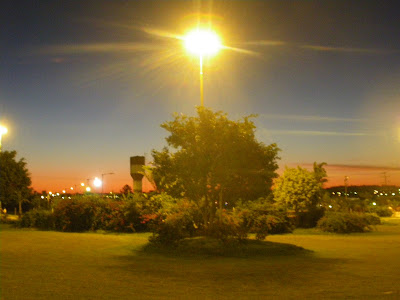 It got dark on the bus journey and I was truly crushed. I kept speaking to the lady next to me on my right asking how far to the airport. Paraguayans and Asuncionites had been friendly so far and I was confident she would tell me when to get off rather than leave me stranded in the city of Luque, where the bus would eventually stop. The journey lasted over an hour and I wasn’t able to grab any photos or videos – rare for me on my travels. Mainly because my camera was in my pocket but it was a big squeeze. I found great amusement in two local teenage girls laughing at my bags, which added to the crush. These girls were typical of the Paraguayan style and as the bus got more and more crammed, one of them was on my lap for a while giggling, and the other had her breasts almost continuously rubbing against my head. It was rather amusing and we did speak but not exchange names. I told them I was going to the airport and that I was from Irlanda del Norte. These girls got off just on the edge of Asuncion and I could breathe again, but the bus was still packed. The journey wasn’t entirely boring however as we passed bright Christmas tree lights, a nice church and impressively the Headquarters for the entire football federation for South America! Yes they are in Asuncion, Paraguay! The driver bangs to a halt on a quiet roundabout beside a petrol station and the woman next to me signals to get off. It’s a big rush and I’m the only one to get off! I’m happy and sad and the above photo was taken as soon as I got off the bus. In fact it took almost 2 hours from leaving the hostel to arrival at the airport. It was a definite fond farewell to Paraguay. 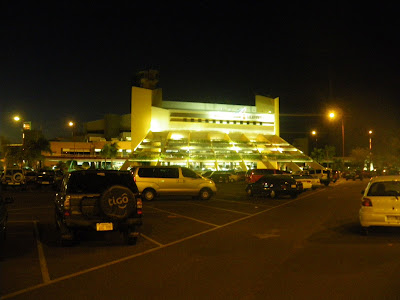 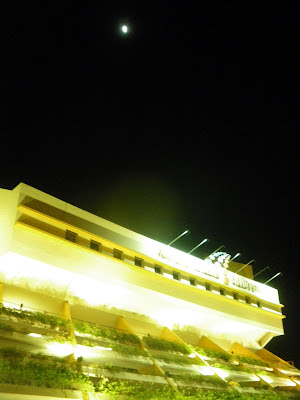 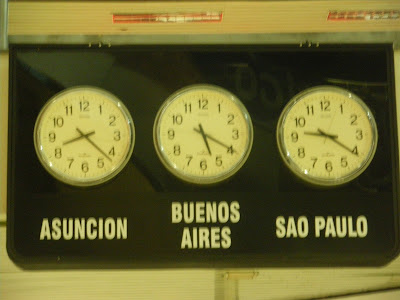 Asuncion is three hours ahead of Buenos Aires and an hour behind Sao Paulo. I would be in all three cities on this trip, and in fact also in all three airports! 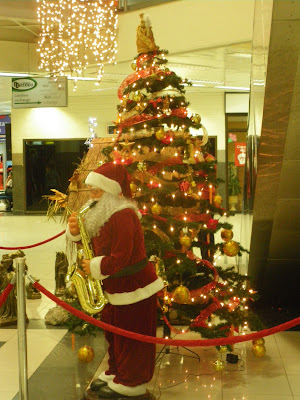 I didn’t manage to capture the wonderful lit up streets and Christmas lights of Asuncion’s suburbs from the crushed bus, but there was a nice Santa display at the airport. 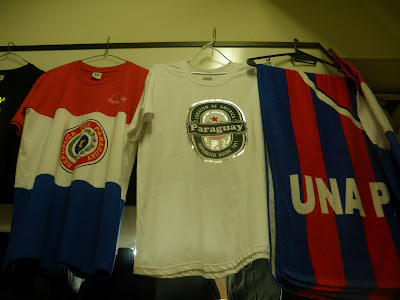 Last chance to buy Paraguayan souvenirs, but I was travelling light and chose not to. 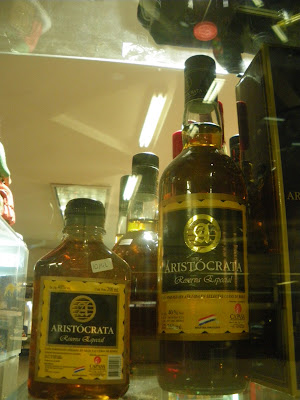 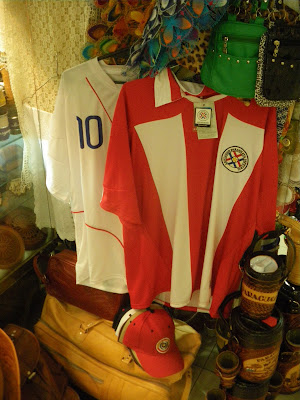 Class of 2010 (when I was there), they made the second round of the World Cup, and a year later would finish runners up in the Copa America. 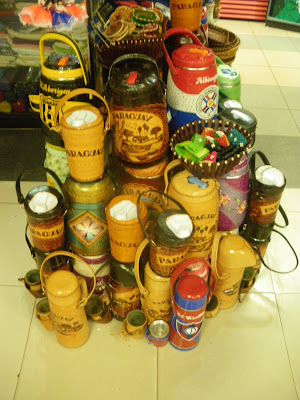 For drinking Terere, their local tea – a selection of Paraguayan flasks. 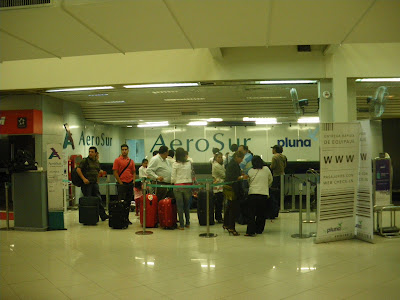 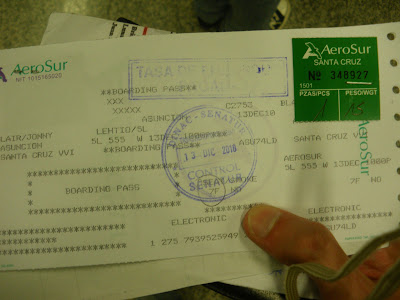 My Boarding pass for the flight from Luque (disguised as Asuncion), PARAGUAY to Santa Cruz De La Sierra, BOLIVIA. Oddly my first stop in Bolivia would not be in a city of high altitude, nor would it be in a city I would actually see. We were being provided with a free night in Santa Cruz De La Sierra! This meant free food and drink, free hotel room and free transport to and from the airport! Just amazing, thanks Aero Sur! 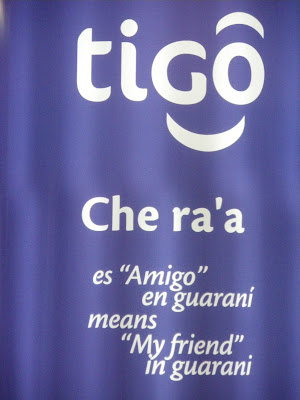 Paraguay has its own “guarani” language you know. 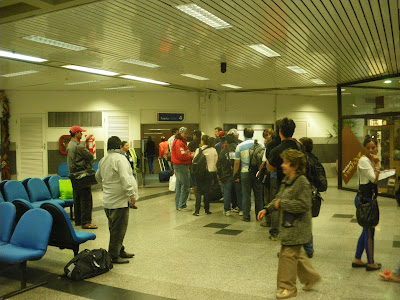 Boarding my flight to leave Luque. 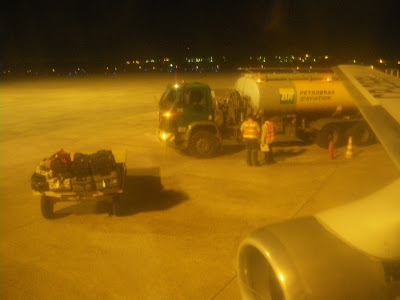 My original flights were 7pm – Luque to Santa Cruz/9pm – Santa Cruz to La Paz. The above photo taken from my seat on board was taken just before 10pm in Luque. We would have about 10 hours in Santa Cruz overnight. The joys of travel gave this added experience to me for free, story here: Santa Cruz You’re Not That Far
There was another bonus for me on leaving Luque airport and I had $25 US Dollars on me expecting to pay a departure tax, but I found out it was already included in my flight ticket. I bought a few gifts with my remaining Paraguayan Guaranis and after realising my computer was broken and couldn’t use the free wi-fi, it was almost time to leave Paraguay behind. 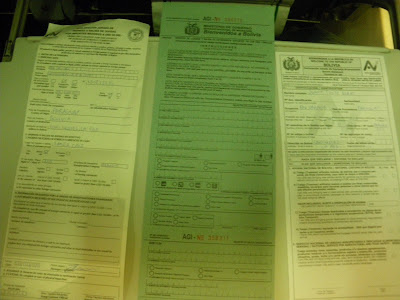 On board we were given free ham and cheese sandwich and a red wine. Amazing. Plus 3 Bolivian immigration forms, given that my point of entry into the country was now Santa Cruz De La Sierra rather than La Paz. 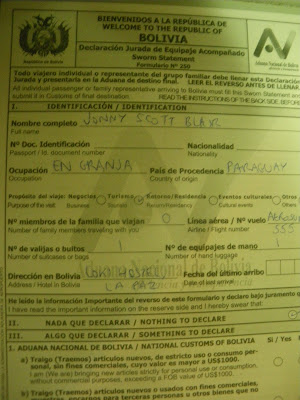 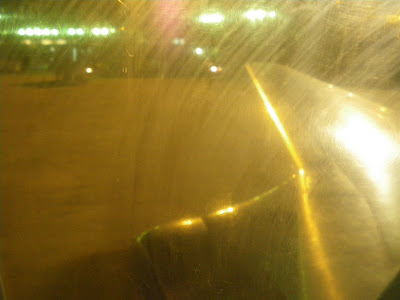 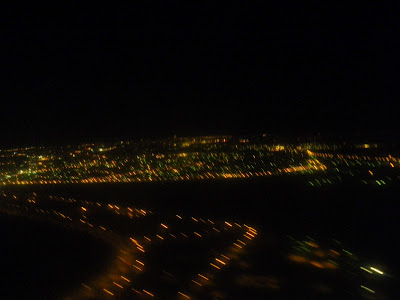 Asuncion at night from the plane. 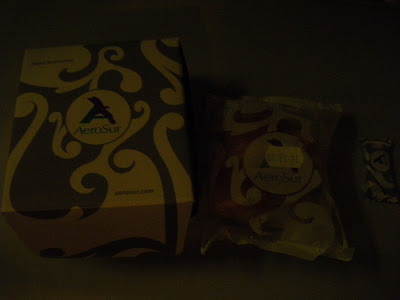 The ham and cheese sandwich and bun. Got a red wine too but not pictured. 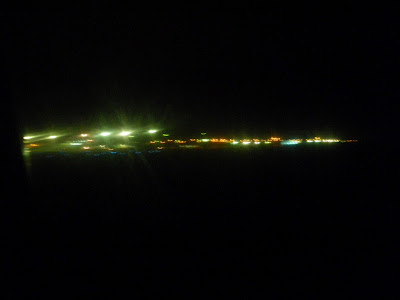 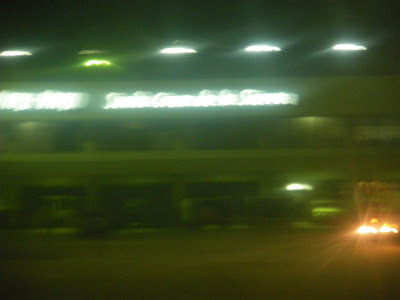 It’s all a blur but that’s the sign for the international airport in Santa Cruz De La Sierra. 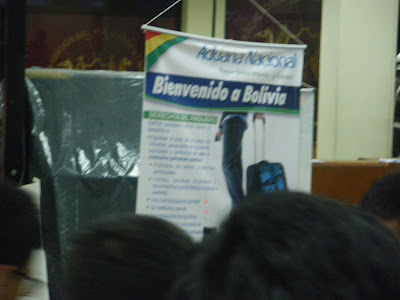