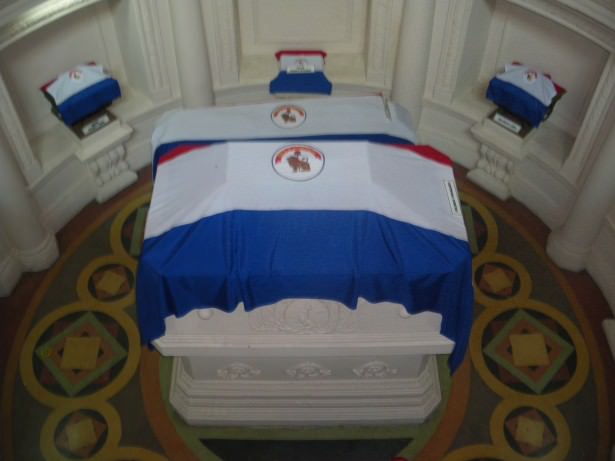 Top 5 things to see and do in Asuncion, Paraguay.

I LOVE it when people ask me about South America and they say “did you go to Rio or Bariloche?” Because the answer is “no” and quite frankly, I still don’t really care that much about “on the beaten track cities”, which might explain how I got sentimental, inspired and perky on my visit to the Paraguayan capital city of Asuncion. I still have to pinch myself sometimes to understand why the hell I went there. A love of football, and Jose Luis Chilavert might help explain it. Whatever took my Northern Irish heart to Asuncion, I’ll never know. What I will know is that I loved it. I’ve raved about Asuncion a number of times, but never done a “Top 5”, mainly because you won’t agree with my top 5, or you’ll say “you missed activity r” or “you forgot to include sight e”. Remember this is my journey… 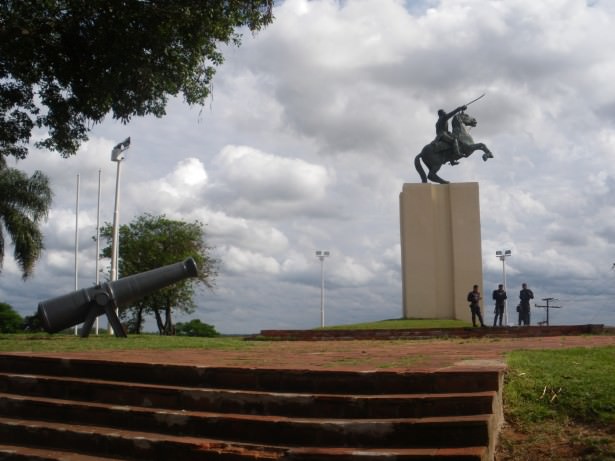 An impressive monument is manned by soldiers down near the seafront in Asuncion, Paraguay.

I love trains, but you’ll be waiting a while if you want the next Paraguay to Bolivia service to leave Asuncion. Rather than relegate this train station to history’s dustbin, the Paraguayans have opened it as a museum. You can get on an old train and reminisce. I wrote all about it here: Last train to nowhere. 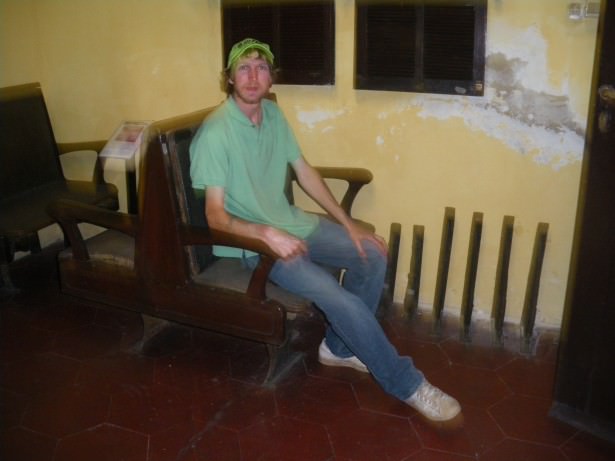 On a fake train in Asuncion Train Station Museum in Paraguay.

There’s nothing like a bit of simultaneous country viewing and Paraguay sits directly opposite Argentina. So much so than at various points you can stare over at Argentina. You’ll need to be in and around the slums to get a decent vantage point. And while this isn’t recommended at night, I must admit I loved it by day. Asuncion’s port is so untouristy, you’ll be mistaken for a native before you open your mouth. Although you can see Argentina from Asuncion, I mut mention that I came into Paraguay from the other side. I got a bus from Ciudad del Este to get into Paraguay, I then booked my flight (got a pretty cheap rate) from flightnetwork.com and got on the plane, from the airport at Luque, to leave heading to Santa Cruz de La Sierra. Crossing the border here is an option, and if you are on the other side of the country you can see Brazil, Argentina and Paraguay at the same time. 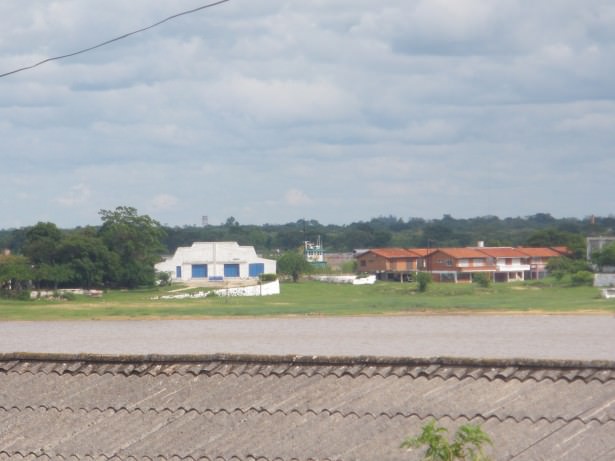 From the slums and the waterfront in Asuncion you can see across the water into Argentina. I always love viewing two countries at the same time.

Personally my Panini Sticker albums as a child influenced and inspired my football dreams. I remember seeing Paraguay in the 1986 World Cup and wondering “who the fuck they were”. Just over a decade later and their goalkeeper Jose Luis Chilavert had become one of the world’s best keepers and a vital player in their international team which qualified for 4 consecutive World Cup Finals. 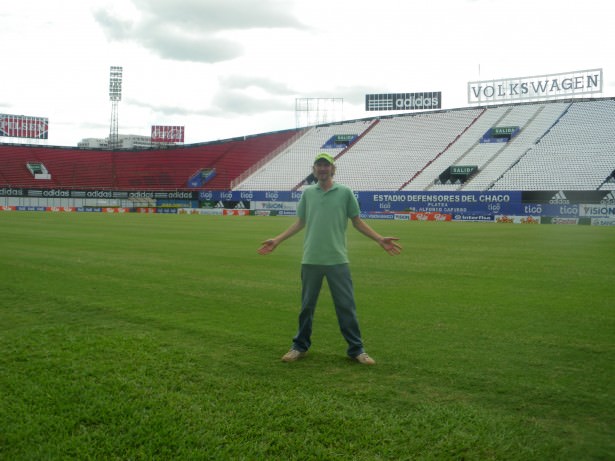 I sneaked onto the pitch at Estadio Defensores del Chaco to reminisce about Jose Luis Chilavert.

I visited the national stadium, sneaked through the gates to stand on the pitch and “do a Chilavert”. A local mused “this boys a nutcase” as I flew my well travelled Northern Ireland flag at the centre circle. “I am mate, but not as nuts as Jose” I replied, while reminiscing the time the Paraguayan struck the crossbar with a free kick in the World Cup. Not bad for a charismatic goalkeeper. My trip to the stadium here: Paraguay National Stadium.

War and politics are never far away as a tourist and I was slightly moved by my trip here. A white building in Heroes Square (Plaza de los Heroes) houses the body of Mariscal Francisco Solano Lopez, a key figure from Paraguay’s past. It’s only a small room which is a monument and memorial to Paraguay’s chosen few. I’d recommend it. Paraguay is a proud country with an army. It is a landlocked sandwich country. 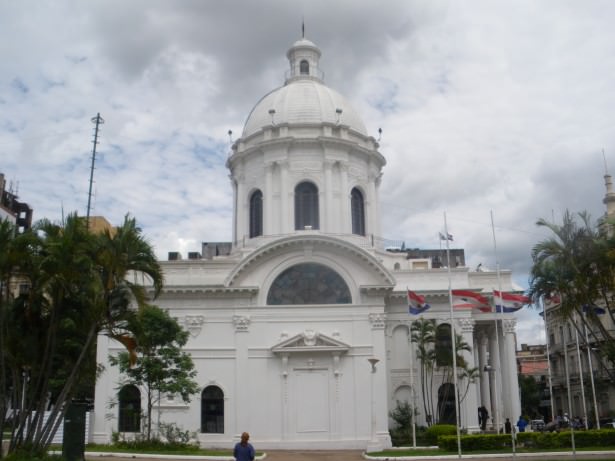 Then have a walk round and admire the other buildings in Asuncion such as the Palace (Casa Gobierno), Cabildo Rosada (former Government House), the Metropolitan Cathedral and some really obscure and random buildings. Asuncion has a very odd and peculiar city centre. Walk at ease around it for hours like me and you’ll love it! 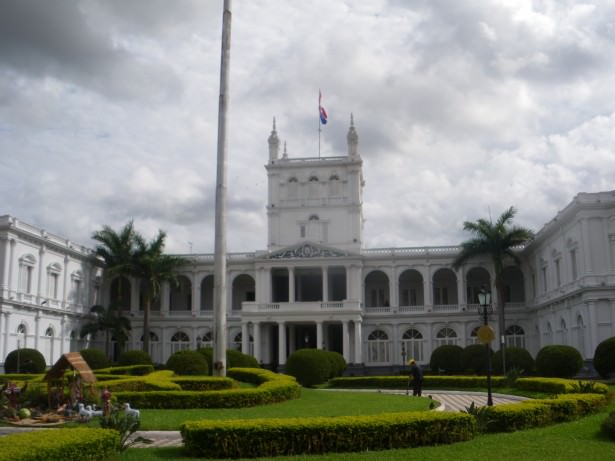 When the sun sinks from Asuncion’s skyline, the most surprising thing is that the city centre becomes the sort of ghost town even Casper would be surprised about. That’s when you get your party shoes on and enjoy yourself. I managed to get pissed with my travel buddies, befriend some locals and get inspired. Gasping for a return to this city. Local beer is Pilsen but the Britannia Pub in the city brews their own beer which is worth trying. 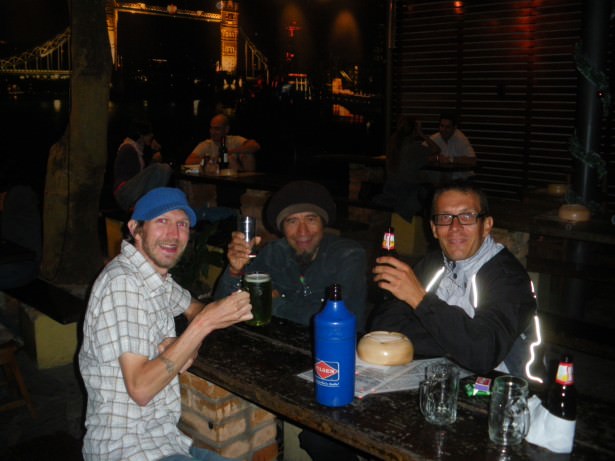 Have a beer in Asuncion! A great city to relax in!

So get your backpack on and head to Paraguay. Hope you enjoyed my top 5 things to see and do in Asuncion. There are a load more things I’d recommend, try and stay in the excellent Black Cat hostel if you can and don’t forget to try Chipa! If you want any more proof of Asuncion’s charm, here are some of my many videos from Asuncion/Paraguay…

At the former train station, now a museum:

Enjoying a night out in Asuncion, Paraguay:

Standing on the pitch at Estadio Defensores del Chaco:

11 thoughts on “Top 5 Things to see and do in Asuncion, Paraguay”