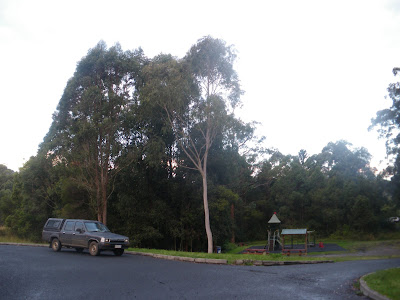 Leaving behind Port Macquarie around 3 pm meant it should have still been possible to see Coff Harbour in daylight. I hadn’t eaten since Newcastle so settled for a quick and easy drive through McDonalds, which sat nicely in the passenger seat and was muched at various slow traffic points on the route up to Coffs harbour. 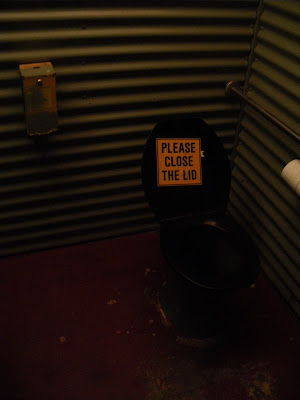 I had hoped to drive to Coffs without stopping but nature called and I needed a lumpy shit, so was in real luck when I saw a rest stop with toilets called “Paddy’s Rest”, ironic title I thought given that Irish people are often termed as “Paddys”, a nickname which I hate. 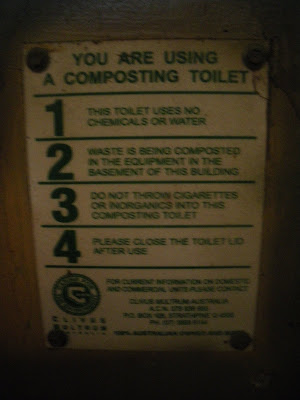 It was a combustible toilet there. First time Id used one. And a nice wee picnic rest area, though I quickly sipped my water and headed on up to Coffs Harbour. 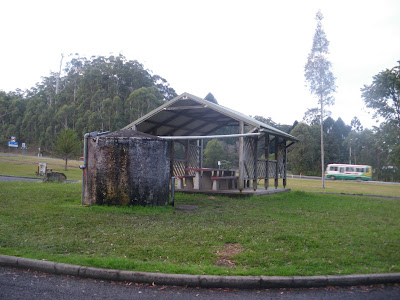 Rather than re-write the entire trip to Byron Bay, I thought i’d include an “at the time” email I sent to my family on arrival at Byron Bay that night. The journey up was nothing but a nightmare and I was as releaved as anyone to have a schooner of Toohey’s New in my hand, live football on the TV and parked in a lovely wee spot for the night’s sleep….here goes… 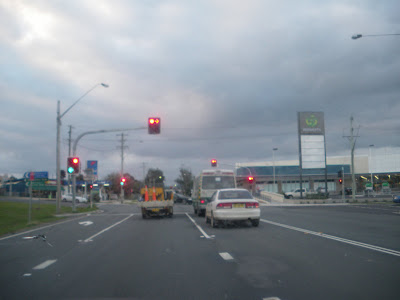 “i;ll elaborate on this before i post it in a few months….and im doing it in bad light so lots of mistakes but its been crazy journey = a rooney is just a kangarooney as they look like wayne…lots more to add… 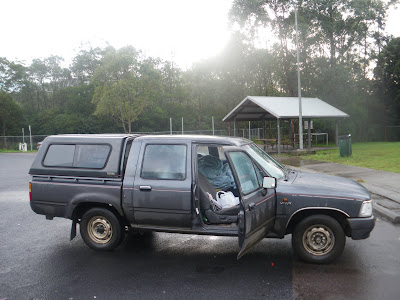 Today began being awoke in my car with torrential rain. It was bucketing. not good considering i parked in an area with a sign saying “risk of flooding” i took not much notice of that while parking last night. I was parked in Ourimbah somewhere north of Sydney. I could hear drips so started the car and took her for a drive round the car park to a different spot. Luckily there was a drain anyhow so the flood risk had gone. I checked the brakes on the car and pushed hard on them a few times. this was a trick I learned from my mum back in 1997 when learning to drive, and it works. Then the brakes are always fine if they have been affected by rain. You can do it when the car has the handbrake on, or is at a junction, but i did it before the day’s big drive began. 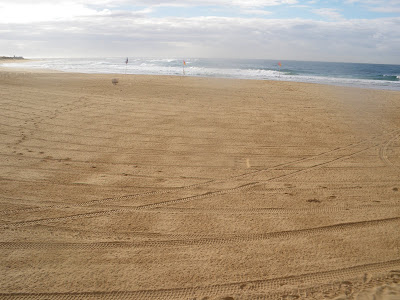 Quick clean of the teeth and breakfast pancakes and banana milkshake plus breakfast bar and a real banana and i was off to Newcastle. The Australian one. It was an easy drive. the rain had gone and i arrived there sometime after 9.30 am. It was a bigger city than i expected with lots of suburbs. something similar to southampton. It was hot and sunny. I parked in the city centre, paying $2.20 for an hour and took time to walk round the city. pleasant city. lots to see and do. Then went to the beach and parked there. Nobbys beach. Used free shower. It was cold but needed a shower. 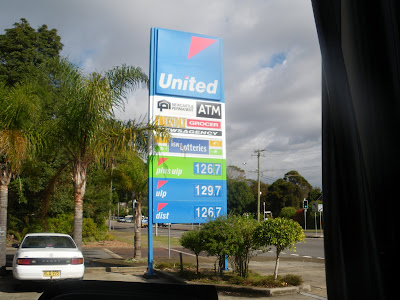 On way out of Newcastle filled up with petrol. 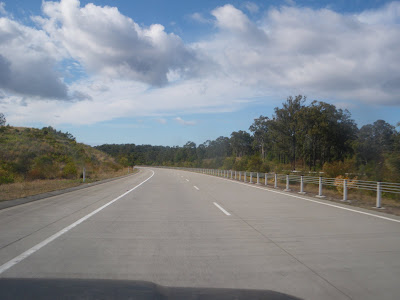 Doing ok for time i thought i would make Port Macquarie for 12.30 pm, but no – roadworks and diversions meant 2.15 pm, which made me think i wouldnt make Coffs Harbour for daylight. The hardest thing these days in Australia is getting time to sightsee as its only light for about 8.5 hours a day, and i spend so much time driving. McDonalds drive through after brief walk round Porty Mac means i could still make Coffs for 4.15, when daylight starts to fade. 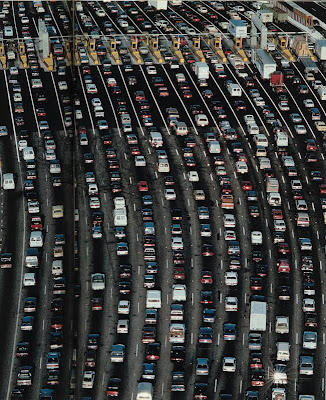 More traffic problems though and slow roads not to mention 6 different school buses in the school rush hour at a town called Kempsey. Needed a poo poo so had to stop at motorway toilet called “Paddys Rest” then it got dark as i arrived in Coffs Harbour. I couldnt see anything but somehow it looked nice, so then ive decided i might as well just drive all the way to Byron Bay tonight as i can see Coffs in daylight on my way bach down south. 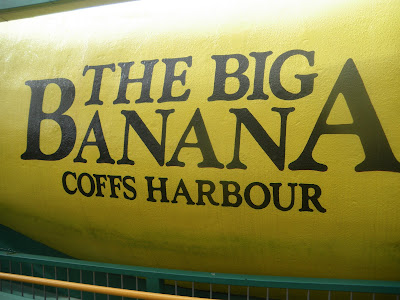 I thought Coffs Harbour would be just a harbour and a beach, but it was massive. a whole load of petrol stations, motels and restaurants. I parked by the seafront and saw nothing except another tourist s campervan. I went on internet to check emails and try to pay for an etag from yesterday on sydney toll roads. its time to head to Byron, but checking on internet says it will take 4 hours, and its 7 pm, so ill just about make the football at midnight if i go now. 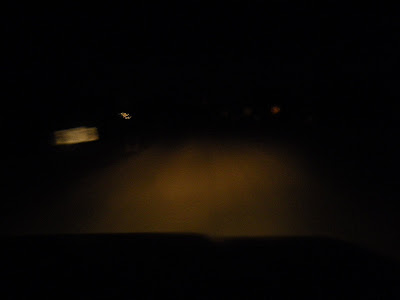 Coffee, crisps and a petrol stop on way out of Coffs I think I will drive all the way to Byron Bay in one go. After 20 minutes severe torrential rain, i cannot see in front of the car, the roads are terrible and i slow down to 40 km per hour. Lots of juggernauts on the road starting to annoy me. And rooneys everywhere. I thought of stopping in the bad weather and forgetting about the football but the drive has to be done at some point, might as well do it at night when im not tired after a coffee and I know bars in Byron Bay should show the football. 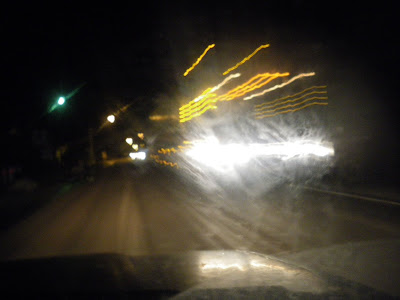 Juggernauts fly past me on both sides, overtaking me at 110 km on a 90 km road. They are a joke. They squirt water all over my car, sometimes mud and they are a hazard I cannot see. They are rooneys everywhere a few dead ones by the side of the road. 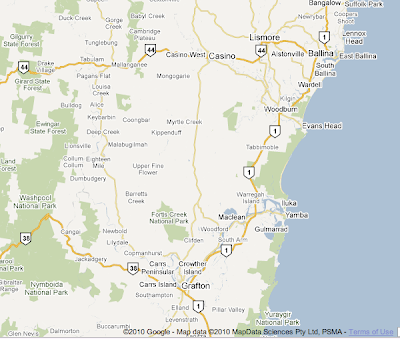 There is not a single signpost for Byron Bay anywhere only for Ballina, which ive never heard of. Im on the 1 highway which should be the right road. I motor on with rude juggernauts beeping and flashing at me. There are no cars on the road just rude juggers. one flashes at me from behind me when im doin 98km on a 100km zone. I hope he gets a ticket. They deserve speeding fines and loss of licence. 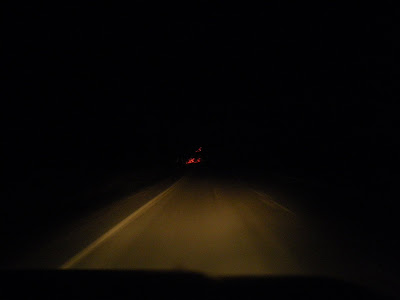 Of course they dont care if they kill a rooney as they are so fast, heavy, long and strong that any rooney or koala in their path will be killed instantly without the juggernaut moving or budging. theyre powerful vehicles. however i was driving slow and cautoius and scared to hit a rooney. If i hit one, the car could swerve, a window could smash or the rooney could dent the car, especially with so many of them there. 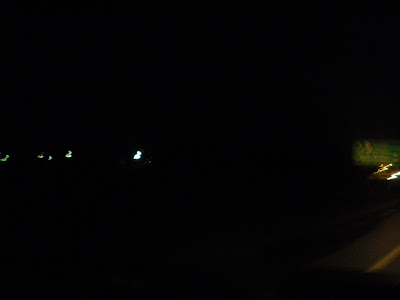 I can barely use my full beam as every minute a jugger comes the other way. I concentrate and keep checking for a sign of Byron Bay no chance. not a single sign. I encounter more rude juggers flciking mud at me in unknown forests. Rain is on again. I see some dead rooneys by the side of the road. 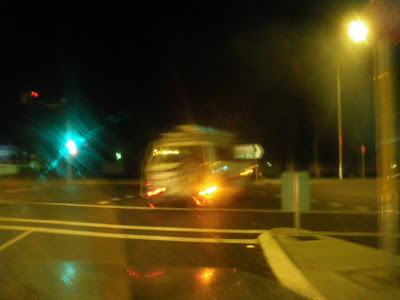 Finally im at this ridiculous unknown town or city called Ballina (blurred image above), and it turns out i came the right way. Finally with 42 km to go i saw a sign for Byron Bay. Turned off at ballina and that was the end of juggernaut hell. at one point i was sandwiched in btween 2 of them. Still more rooneys but only a few cars on the road to Byron Bay. It seems the longest journey of the trip so far. No lamposts, no cats eyes and a few wallabys and rooneys. Its misty and wet and i arrive in the magic of Byron Bay. 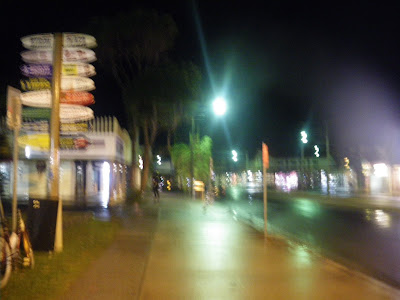 Quiet as anything until i get to Johnson street which seems to have a party atmosphere. Its pouring down and I write this parked in the car park outside the tourist information and the railway friendly hotel. Apparenlty cheeky monkeys is on this street. Ive an hour till kick off for the slovenia match, and im actually thirsty for a beer.
Ive done 2.024 km on my own in less than 5 days so i deserve to have one watch the football and enjoy the night. I’ll park here so i can drink and sleep in…past sunrise.
Then its time for a big adventure. The much shorter daytime drive to Coolongata to meet George! Who used to sell hots dogs with me by Bournemouth beach. Drinks in Coolanagata and a place to stay for the night should be bliss. after that its yer man Owen Milllar again on friday. even on my days off i never get a day off. I’ll need to rest someday…”
and there I was in the true magic of Byron Bay, a unique place, more here:
Cheeky Monkeys – Byron Bay