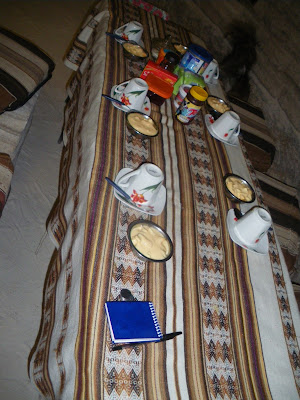 After having a superb breakfast in the salt hostel (Cabana Oz Sal), it was time to explore more of the amazing Salar De Uyuni, leaving our home in the dusty town of San Juan De Rosario behind for the desert wilderness. 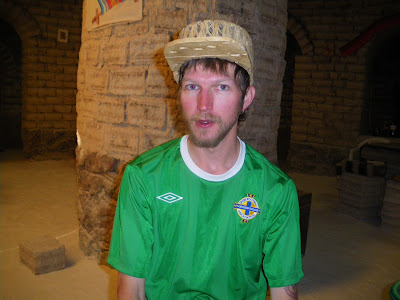 I wore a ridiculous wooden hat, but only at breakfast…the redness of my face was sunburn from the previous day’s heroics. 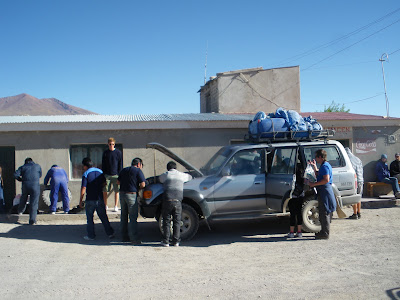 Just before we left San Juan de Rosario however we stopped in a local store where fellows travelers in their jeep had broken down outside. Cristian got out to help them and although myself and the lads offered to help, it was a tyre change and a bit of a push needed and that was all. 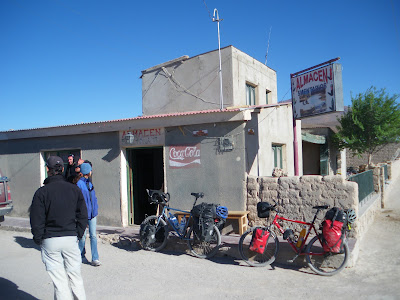 The shop in San Juan de Rosario. Buy what you need now! It may be several hours before you see another shop… 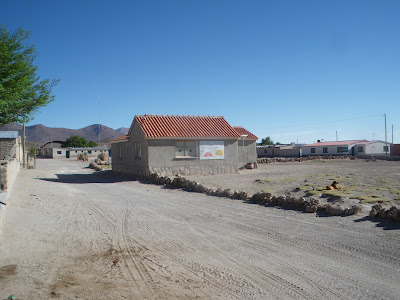 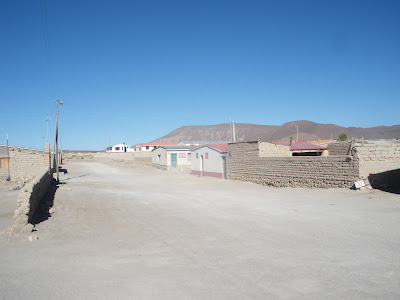 Soon we had left behind the small village of San Juan de Rosario which was home for a night and we were exploring a special place here. 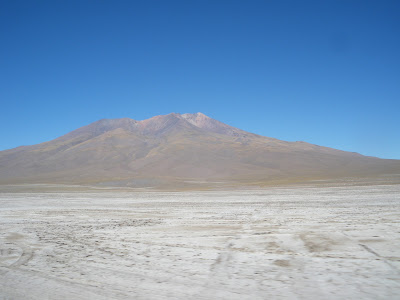 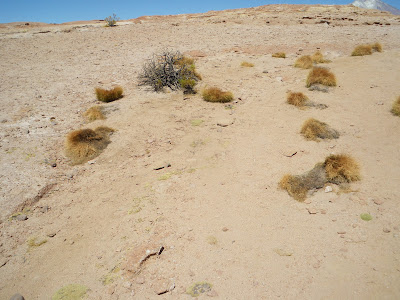 By this stage we were now driving through a desert. Mirages and Oasises a plenty on view out the jeep windows. We were no longer on salt, rather cumbersome rocky terrain. 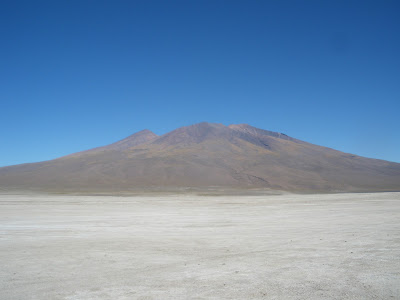 In the distance Cristian points out a mountain. “Gorilla mountain” he called it. High and clearly visible, the most striking aspect of this mountain was the fact that it looks like there is naturally a gorilla’s face embedded into the mountainside. 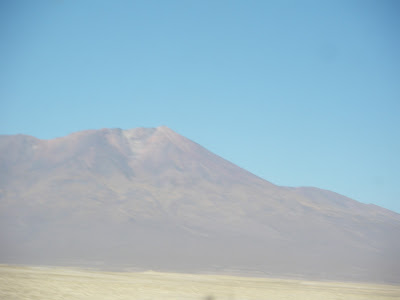 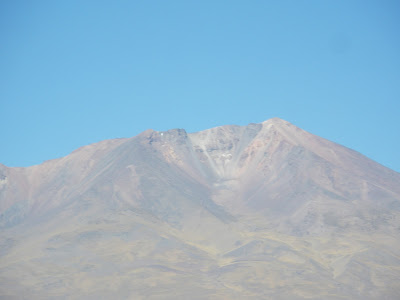 Can you spot the gorilla? We all seen it with our own eyes and were highly impressed. Maybe you had to be there. 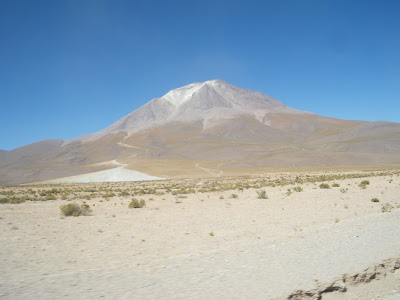 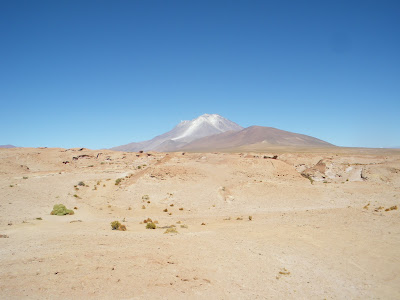 This part of the Salar de Uyuni is where south western Bolivia eventually meets northern Chile. I had watched manys a documentary of it when I was young and was in awe of my surroundings. Living myself a dream here, just spectacular terrain all around. 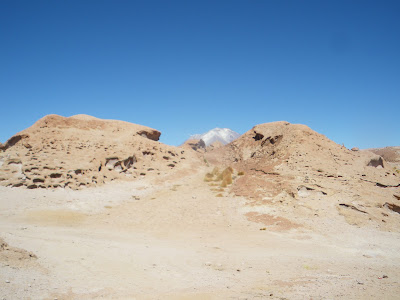 And volcanic. Which brings us to our next stop. An active volcano. 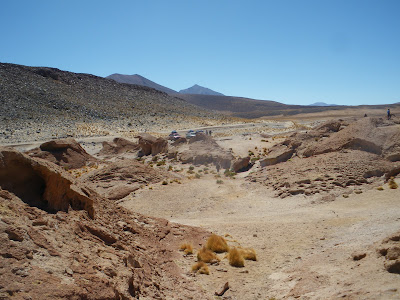 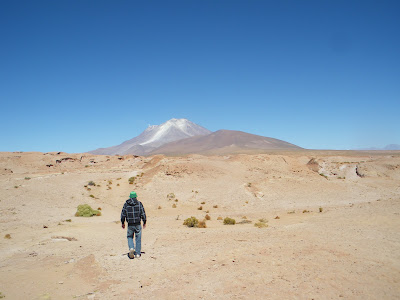 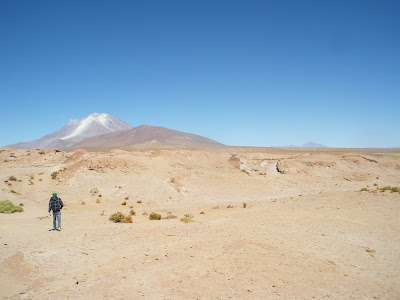 We walked up towards the foot of the active volcano. Towards being the important word here. We were miles from it, but the smoke from the top of the volcano was visible for all to see. We asked our guides regularly the names of these places we visited, and while many remain unknown, I believe this volcano to be Volcan Licancabur. 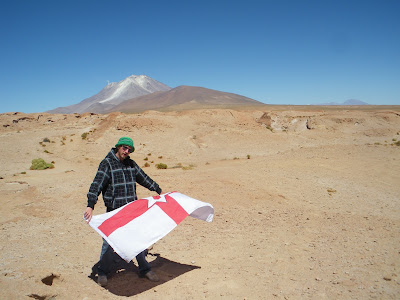 Northern Ireland flag with the volcano in the background. 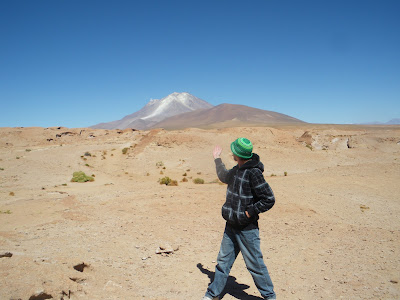 It was a hot hot day and you must all wonder why I wore my heavy fleece. I was simply protecting myself from the sun, I had brought two x 2 litre bottles of water on the tour so wasn’t ever out of liquid, or too hot. 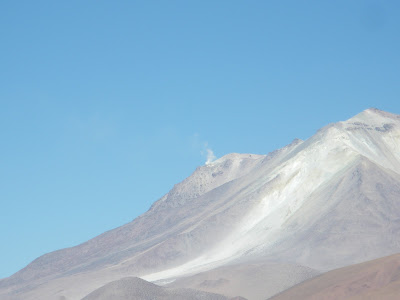 The only photo I took where you can see the actual smoke from the volcano. 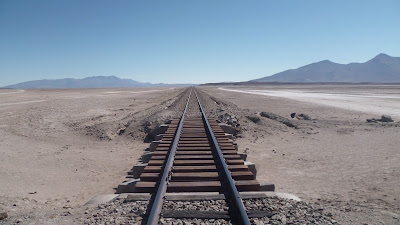 We then arrived at a sparse area with a railway line running right through it. This was to be honest the most odd place I have ever seen a railway line. 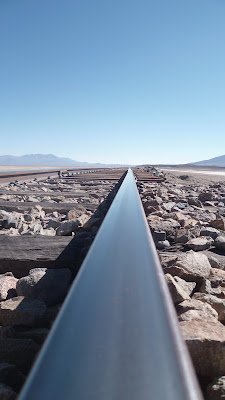 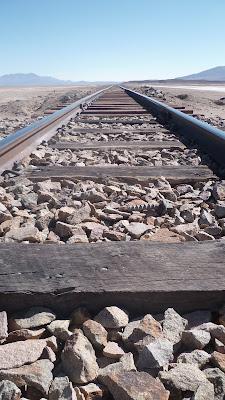 I had seen a Michael Palin documentary years ago where he got the train through the Atacama desert in Chile, all the way up to La Paz. It’s hard to believe the train line can actually run, given the copious amount of obstacles in the way. Deserts, volcanoes, mountains, salt plains, forest, hills and cities. But this was one nice moment to be stood there on the railway line, right on the track. 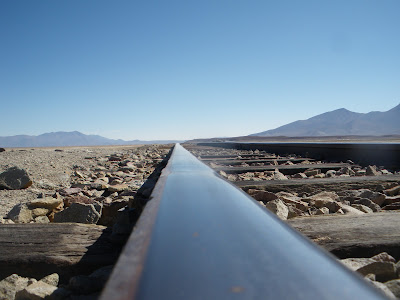 Bolivia sadly lost the remainder of its coastline to Chile at some point or other during war, one of the reasons that Bolivia is one of the poorest countries in South America. Potosi (the world’s highest city, which I also visited) was once a world leader in silver mining, production and export. I visited the mines and yes they are still working away there, but because of the loss of their coastline, the Bolivians get very little of the profit from their hard work, as they cannot export directly by sea. Of course the option of train and air is there, but the traditional route of putting the goods on a train and then shipping them off as cargo has been hindered somewhat. 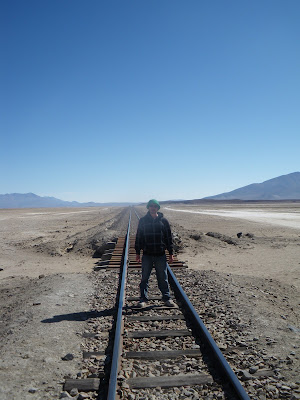 Politics aside, the railway line runs all the way from Calama in Chile to La Paz in Bolivia though infrequent and slow. It’s actually a single track. If I had more time and budget to play with, of course I’d have chosen the train journey. Michael Palin did it…But imagine being stranded or breaking down here. It’s a world of wilderness. 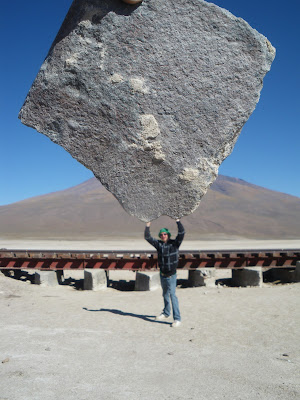 Time for one crazy photo by the railway line then! 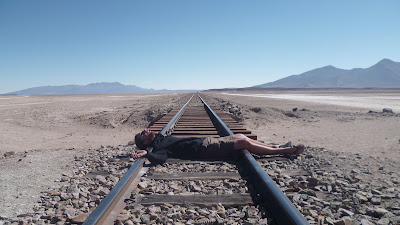 We took some photos and posed by the isolated railway line before it was time to head through hills, and on a rocky desert road with some greenery for a change. Next stop would be at Laguna Canapa…

Via – Gorilla Mountain, the Chile to Bolivia railway line, an active volcano


BY THE ISOLATED RAILWAY LINE:


MICHAEL PALIN’S FULL CIRCLE SAW HIM TRAVEL ON THE RAILWAY LINE I VISITED: