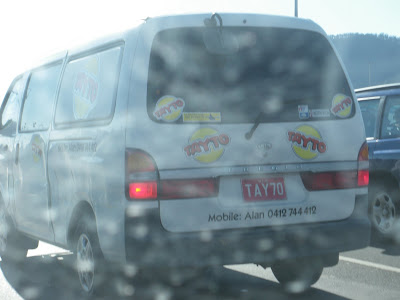 Imagine the surprise and disbelief of me driving through Hobart in Tasmania in May 2010 and seeing a van with the word “Tayto” on it!!! The Northern Irish crisp! And next to the sticker on this white van was another sticker with “Norn Iron” on it. I thought for once in life my eyes were deceiving me. The van was in the next lane at a traffic light on the way out of town. 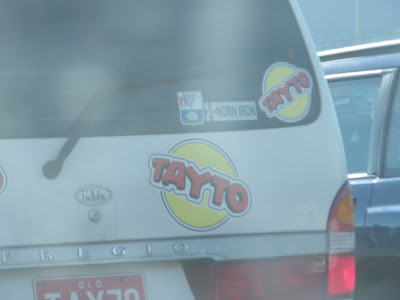 I quickly grabbed my camera and also made a quick video thinking the moment would have passed and it was all a big dream. I’m not a particularly fast driver and soon though the van had sped off and I had lost it. It was all a dream or was it… 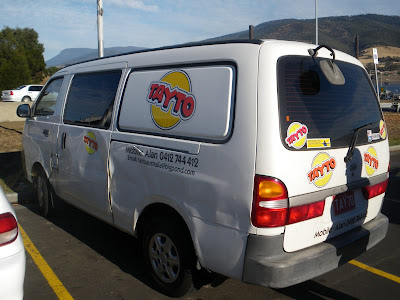 At this point I was in such disbelief that I just decided to drive at my normal speed anyway and had also decided to stop off at McDonalds, past a suburb called Glenorchy (I believe) as there I can use the free wireless internet as well as pick up a nice easy cheap lunch from McDonalds! Then fate played a part… 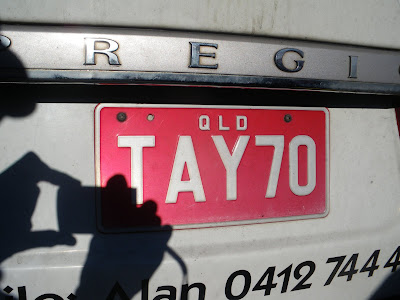 Parked in the same McDonalds car park was the Tayto van!! So naturally I went straight over and there was the driver, the owner and the importer of Tayto into Australia…Mr. Alan Graham. I couldn’t believe it! There are a few things I miss from Northern Ireland and Tayto Cheese and Onion, Soda Bread, Potato Bread, Nambarrie Tea are just a few of them. 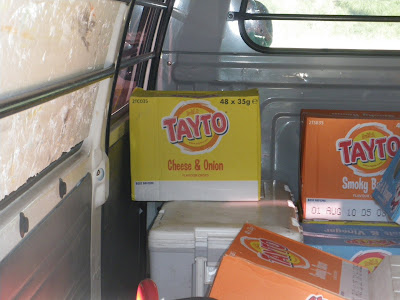 Alan introduces himself to me, I’m in disbelief and he opens up the back of his Tayto van and hands me SIX packets of Tayto Cheese and Onion. I offer to pay, but in true Ulster hospitality he didn’t charge me and suddenly for the first time in 9 months or so I would get to taste the flavour of Tayto crisps. “The taste of home” as their Tandragee slogan once read. 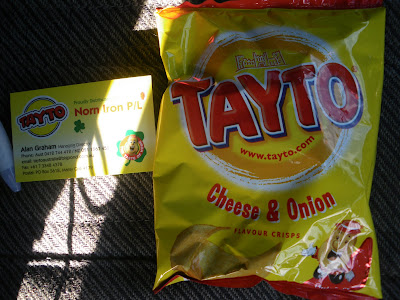 I got a business card off Alan and it seemed the world had gotten even smaller. Alan was based in Brisbane, and I later learned had also met Owen Millar (my mate from Bangor and from SOENISC). I invited him to the TasmaNIa NISC up coming meeting for the World Cup, but he wasn’t around. 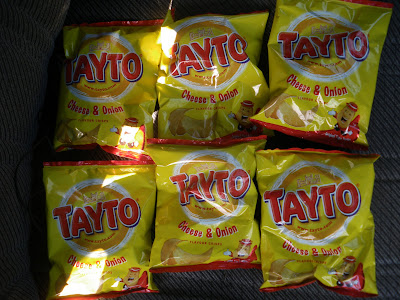 6 pack of Tayto Cheese and Onion – live from a car park in the northern part of Hobart, Tasmania. Of course it is a small world. Alan Graham was also invited to the Brisbane NISC inaugural meeting that I then attended once I was back on the Australian mainland a month later! 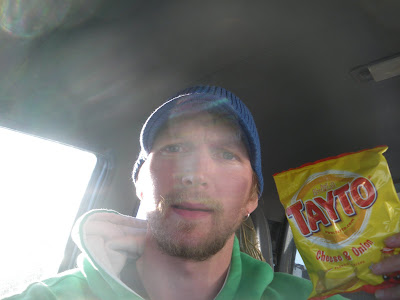 Me with my long awaited packet of Tayto Cheese and Onion. 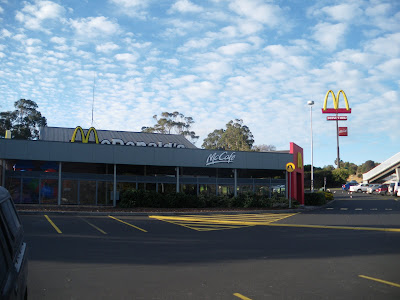 The McDonalds where I met Alan Graham that day! 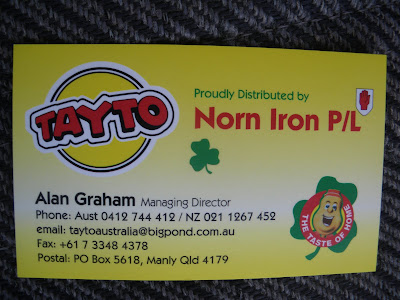 More coincidences would follow in that Andrew Power who was living in Hobart and had the wee NISC get together with me in June also knew of Alan Graham, a boy randomly also met Alan Graham and his van in Launceston. And recently…at the Sydney NISC meeting, Andy Berryman, chairman of Sydney NISC also mentioned Alan Graham to me.


Want Tayto and some other Northern Irish, Irish or British products in Australia?? Then e-mail Alan Graham and get yer fix…:
Norn Iron – Alan Graham

A VIDEO OF ME TRYING TO FOLLOW ALAN GRAHAM IN THE TAYTO VAN:

A VIDEO OF ME AFTER GETTING 6 PACKETS OF TAYTO CHEESE AND ONION:

1 thought on “Small world? You bet! Tayto Van at Glenorchy!”