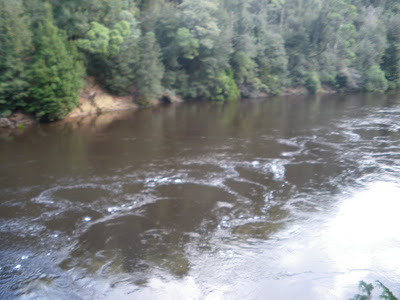 After tasting the honey at Lower landing it was onwards past two station stops, neither of which are used any longer…but added a bit of history to the journey…we passed by the King River several times. 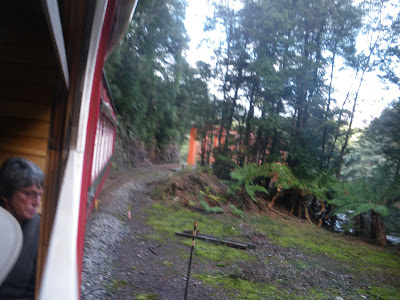 An excellent view out of the train window coming round a corner. Just after this we got to “Teepookana” or rather, where the tiny settlement of “Teepookana” once was. 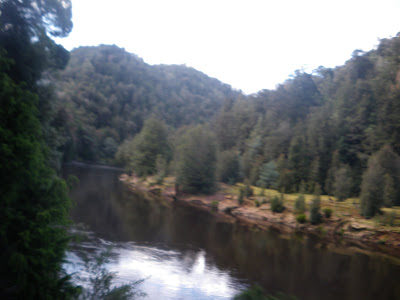 There was nothing there now. It was once used as a port and simply because the river came up at a wide part and it was an easy way to transport goods, taking them off the boat and straight onto the train. 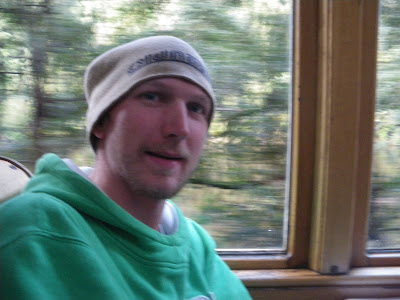 Relaxing on the train to the nothingness of Teepookana… 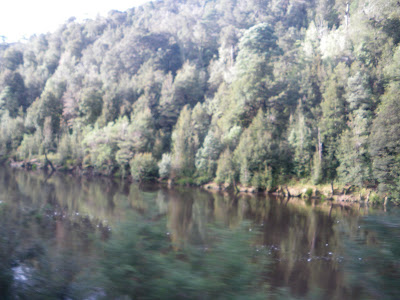 We learn some interesting facts on this part of the journey. One is that teepookana once had its own postage stamp – and this was so rare that it is worth $30,000 these days. We also learn that the “red bridge” at Teepookana came all the way from Glasgow in Scotland and was re-assembled in Tasmania. 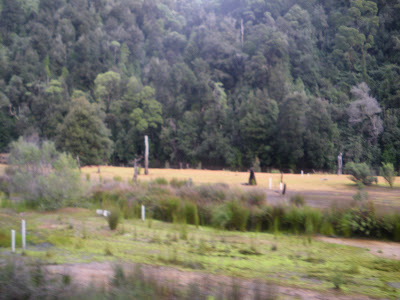 But most interestingly of all for me is that Teepookana was once a proper settlement and port, hosting a population of 250 people, and also had its own port, police station, school, shop and post office. Another of planet earth’s classic “lost towns.” Apart from the above photo, the train was going pretty fast and that was all there was to see of the area near Teepookana. 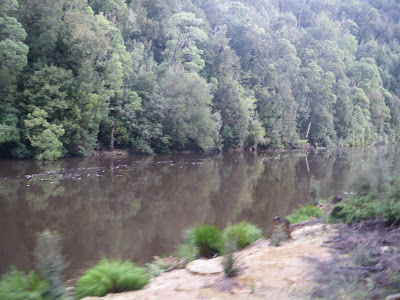 As the river got wider, myself and the guy behind me spotted a duck billed platypus, which apparently is quite rare in these waters (although Latrobe in northern Tasmania is the world capital for the duck billed platypus). Managed to get a video of this part of the trip, but no photos so you cant actually see the platypus. One of the benefits that “being there” has over “reading about it.” 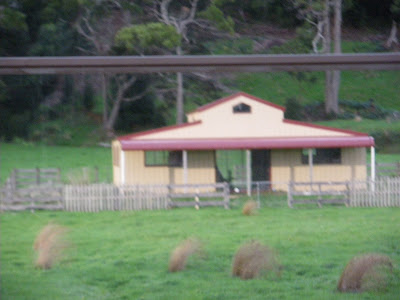 The next “settlement” along and a former station stop was Lowanna, the only thing of any note here was a yellow farmer’s shed and a few cows grazing. It was actually a “yellow cottage” where a family once lived. By this point we were well out of the rainforest, had come right back down to almost sea level and it was obvious that the journey was almost over.


Lowanna…which means beautiful lady, not quite over yet, but after passing by Teepookana and Lowanna, the next stop would be the end of the line!


Travelled From – Lower Landing past Teepookana and Lowanna
Transport Used – John Lyell No. 3 Locomotive Steam Train
Distance Travelled – 14 kilometres
Highlights – Seeing a duck billed platypus, the trip down out of the rainforest, more amazing gorges, learning the history of Teepookanna the settlement which is no more.
Nationalities Met – Australian
Time period – 3.15 – 3.35 pm
Key Songs –
WEE BLUE FOLK – LAST TRAIN TO SOMEWHERE:
PASSING THE YELLOW COTTAGE AT LOWANNA:
VIDEO OF THE DUCK BILLED PLATYPUS FROM THE WCWR:
Join 15,017 Monthly Readers! If you enjoyed this article and LOVE travel and SAVING money, get e-mail updates from Don’t Stop Living – a lifestyle of travel! (It’s Free) 😉 Jonny